It was a bold choice to have Halloween III be a completely standalone movie. A movie that has nothing to do with the Michael Meyers story from the original movie and its sequel. It’s also a choice that didn’t go as well as they thought it would have. Halloween III did not live up to expectations. Both critically as financially. So the producers did what everybody would have done in such a case: bring back proven cash-cow Michael Meyers. As you might recall, he was shot multiple times to the face at the end of Halloween II by Laurie Strode. Dr. Loomis then blew up the gas filled room right after Laurie got out. A noble self-sacrifice. Who could survive such an ordeal? Well this movie isn’t called Halloween 4: The Return of Michael Myers for nothing.

Halloween 4 resets all of the pawns from the first two Halloween movies. Michael Meyers is once again locked up in a mental ward. He has post-burn scars and his face is covered in bandages most of the time. Next to the character of Michael Meyers, Donald Pleasance also returns as Dr. Sam Loomis. Like Meyers he also has scar tissue. Most notably in his face. So notable you can see it change from scene to scene. Jamie Lee Curtis didn’t want to reprise her role, so the character of Laurie Strode apparently died in a car accident somewhere between Halloween 2 and 4. This is the first occasion where the a Halloween undid the ending of the preceding movie. Halloween 5 and Resurrection would do the same thing. Some of the movies even ignore entire movies. This makes Halloween one of the most confusing and inconsistent franchises to exist. 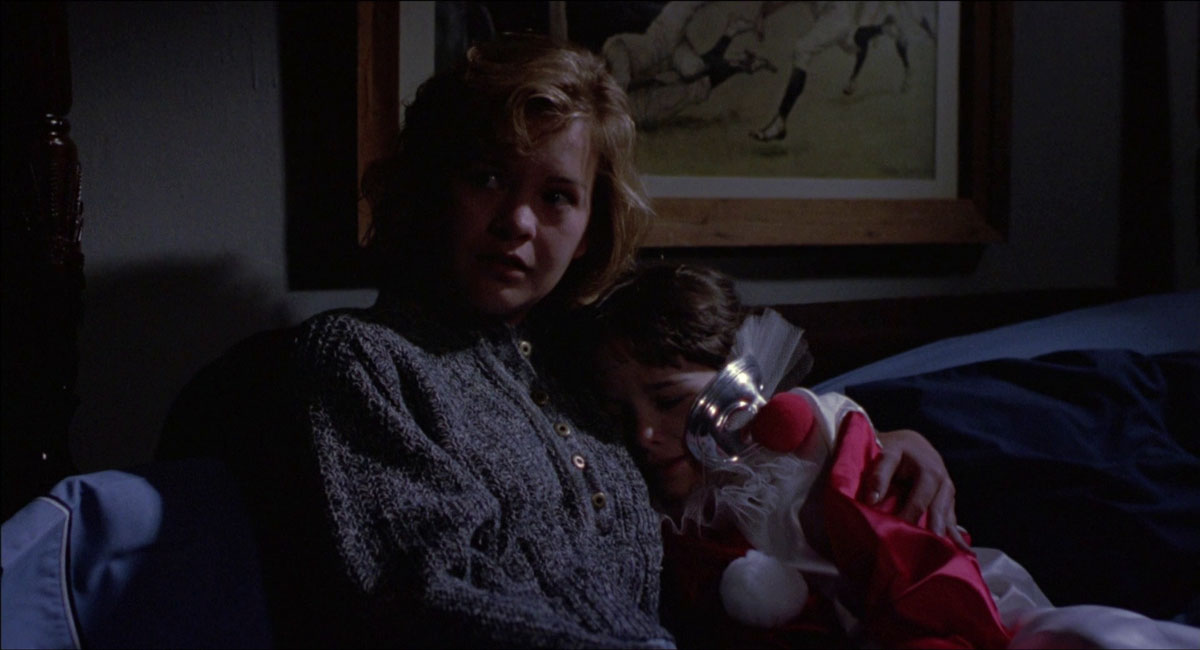 The opening scene depicts how Michael Meyers escapes once again. This time by stealing an ambulance during a transfer. He picks up a jump suit at a remotely located gas station as well as a mask. Coincidentally one that looks very much the same as the mask he stole ten years back. What are the odds right? When Dr. Loomis finds out about Meyers’ escape he does what he does best: Chase after him while ranting about how Meyers is pure evil to anyone who he comes across. Meyers goes back to Haddonfield again. This time to kill the daughter of Laurie Strode. A seven year old girl named Jamie (Danielle Harris).

This all takes place exactly ten years after he came home for the first time. Again on Halloween. I’m sure glad for Michael that they didn’t decide to transfer him during Easter or Christmas. That would have really put a dent in his M.O.

If the plot might sound familiar it’s because the script is basically a copy from the first movie. We go through exactly the same beats, but without the suspense John Carpenter was able to create. Halloween 4 is never scary, nor suspenseful. It tries to catch up with the competition that has been dominating the slasher genre throughout the 80s. Most notably the A Nightmare on Elm Street and Friday The 13th series. Halloween 4 is a lot tamer when compared to Elm Street 4 or Friday the 13th part 7. Both released the same year. There are a couple of scenes that feel like they have been added afterwards to up the gore-level. Like a guy getting a thumb pierced into his skull.

When I come to think of it, 1988 was actually a pretty cool year for horror buffs. Halloween 4, A Nightmare on Elm Street Part 4, Child’s Play, Hellraiser II and Friday the 13th Part VII were all released that year.

I did like how for once everybody was aware about the homicidal mad man running around town. The inclusion of the town hillbillies gave the movie a welcome touch of humor. Meyers also ups the ante by sabotaging the local power-plant so that the entire town is without electricity. Normally the killer just cuts off one house before wreaking havoc. Halloween 4 also keeps it rather simple when it comes to Michael Meyers himself. He’s still the obscure man who mostly resides in the background. We don’t get to learn much about him except that Jamie is his niece. The next two movies will give him a ludicrous back-story which adds absolutely nothing to his character. Like Freddy Krueger or any other horror character: the less we know about him, the scarier he is. 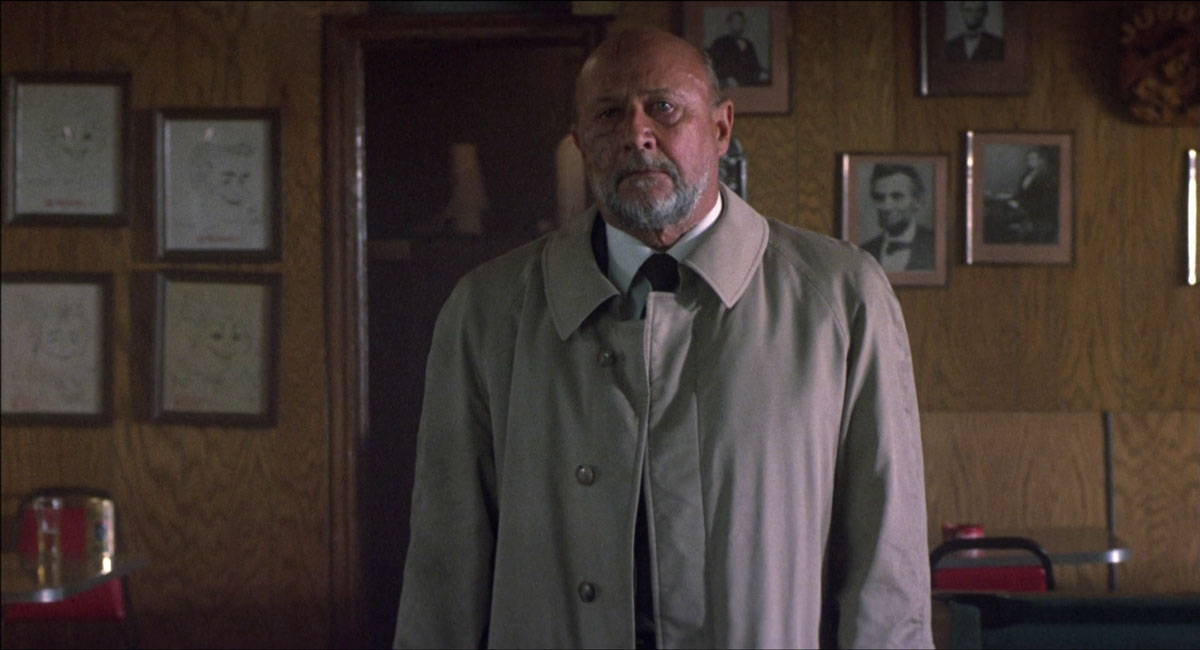 In my review for Halloween II I mentioned that the character of Dr. Loomis was turning into a caricature. Halloween 4 continues that trend. He’s an old man walking with a limp, yet acts as if he’s this bad ass. Dr. Loomis would become Pleasance’s pay-check role until his death. As the most talented cast-member he’s the movie’s M.P.V. No matter how much he hams up his performance, But it’s also a rather one-dimensional part. He appears in five of the first six movies and we learn nothing about him. Does he have a wife? What are his hobbies? His only function is to add exposition to the movie and for the movie to have a character who has a link to the antagonist. Though it does seem that Danielle Harris’ Jamie could take over that position in the series. The girl gives a great performance. 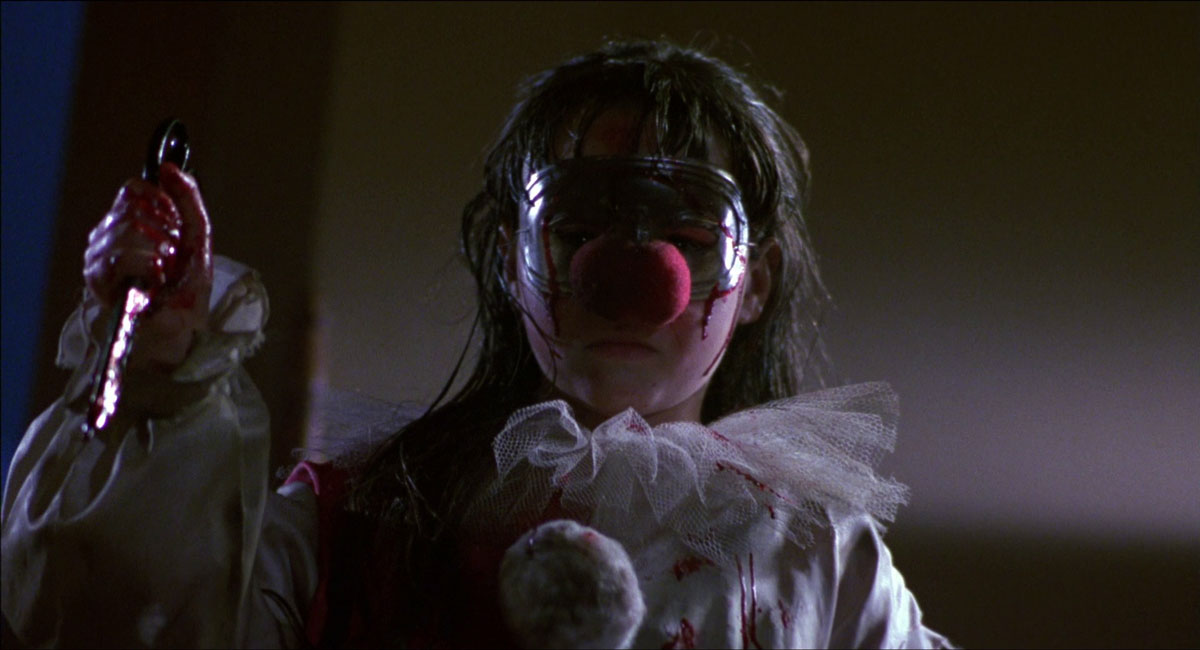 What I really did like about the movie was the ending. I love how it comes back full circle to the opening scene of the first movie. It actually fits the character as well, considering what she has been through the past day. The ending also sets Halloween 1, 2 and 4 as a decent trilogy. If this was the final movie, the Halloween series would have been looked upon much more favorably. Too bad that Halloween 4 was successful enough to green-light another sequel which would undo the final 10 minutes of this movie.

Halloween 4: The Return of Michael Myers is a decent but uninspired sequel that features a couple of fresh elements, but overall feels like a remake of the first movie.

Halloween 4: The Return of Michael Myers