Of all the big horror franchises Halloween has always been the most inconsistent and confusing. Inconsistent because in terms of quality the franchise has a legendary original movie. But that movie has a string of sequels which vary wildly in terms of quality. None of them coming close to the original. The best one is Halloween: H20. But that movie is mostly just an enjoyable slasher riding on the success of Scream.

The series is confusing due to the constant ignoring of endings of previous movies. In some cases entire movies are being erased. Halloween: H20 was a direct sequel to Halloween II, ignoring parts four till six. Part three is a completely standalone movie as are the two Rob Zombie movies. Even the names are confusing. There are now three movies simply titled Halloween. The 1978 original, Rob Zombie’s 2007 remake of the first and this movie. Guess they ran out of subtitles.

2018’s Halloween is a direct sequel to the original Halloween. It simply ignores all of the other Halloween movies. A surprising choice since Halloween II and H20 both star Jamie Lee Curtis as Laurie Strode. Since Curtis stars in this movie it’s a bold move to just ignore all of the movies in between. It’s also a good move as this is the most realistic way they could have made this sequel. Considering babysitter killer Michael Myers got shot in the head in part 2 and decapitated in H20. 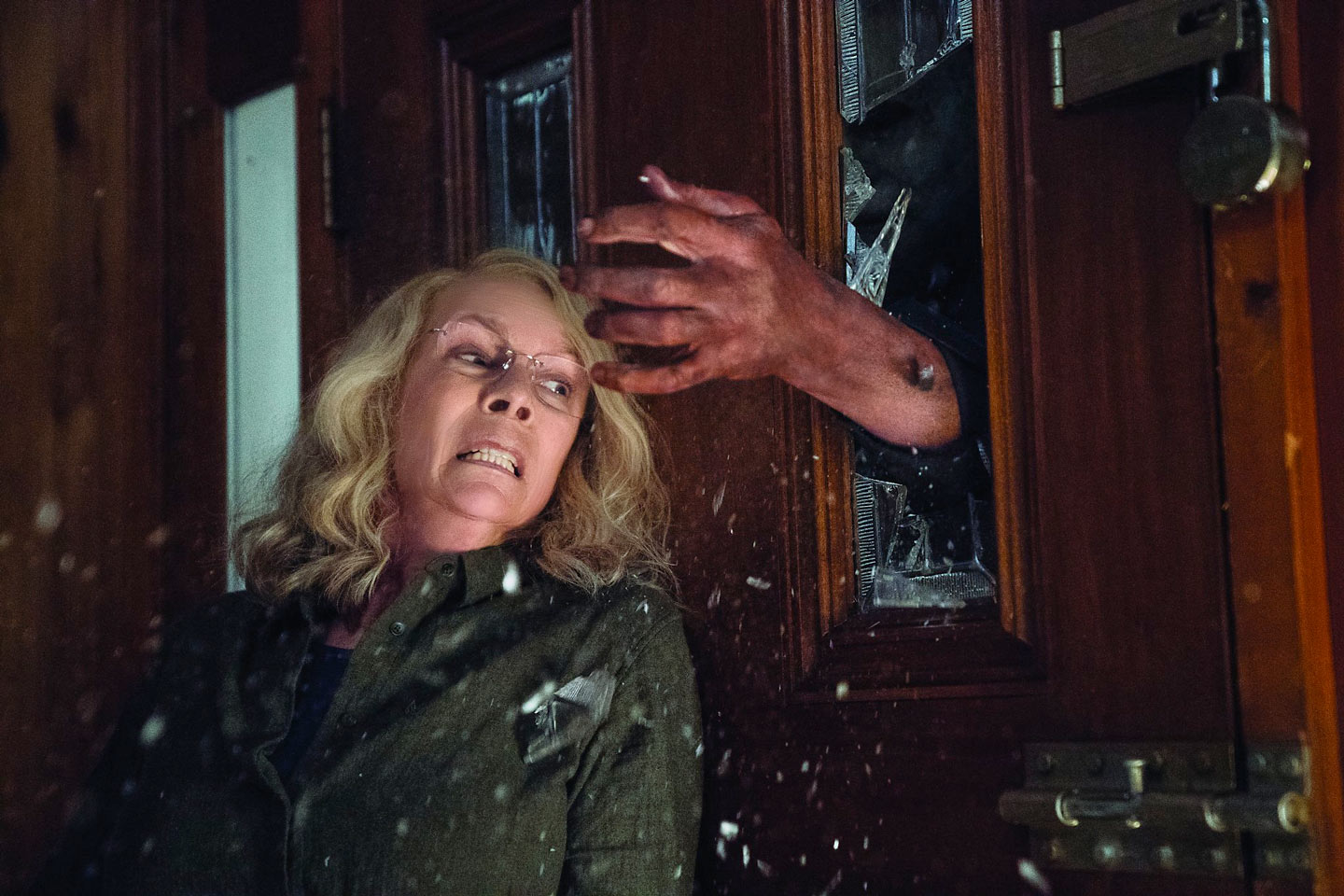 The story is fairly straightforward. Sole survivor Laurie has been living a life full of PTSD resulting in two broken marriages and a strained relationship with her daughter (Judy Greer). Knowing Myers is still alive she has been preparing ever since for the day he will come home again. Even though he has been incarcerated since Halloween night in 1978. She lives in a secluded area, a large guarded fence surrounding her home. Her basement is full of guns and other weapons. She also drinks to numb the trauma.

Her daughter Karen and granddaughter Allyson do their best to lead normal lives. Karen has been raised much like John Connor was in Terminator 2. She doesn’t want the same for her daughter who has a better relationship with Laurie than she has. But their lives are about to change as Myers is being transported together with a bus full of other mental patients. They will never reach their destination as the bus crashes and Myers escapes. This of course happens on the day before Halloween.

Director David Gordon Green has created a decent sequel that makes for a welcome return of both Laurie and Michael. It’s also a movie that sometimes feels like a greatest hits album of the Halloween franchise. There is thin line between paying an homage and copying something. Gordon Green manages to stay within the lines, but part of that is because the scenes that are obvious homages belong to movies that are at least 20 years old.

There is bathroom scene that comes from H20. A scene with the mental patients wandering on the road is lifted from the first movie. A scene where he walks down the street between trick or treaters is taken from part 2. Even the same gas station from part 4 returns as it plays a pivotal part in how Myers gets his signature outfit back. In broad strokes even the story is the same as the first and fourth Halloween. Even the PTSD and alcoholic elements of Laurie’s character have already been done in H20. The new addition here is that Laurie is now a survivalist, much like the character of Sarah Connor in Terminator 2. 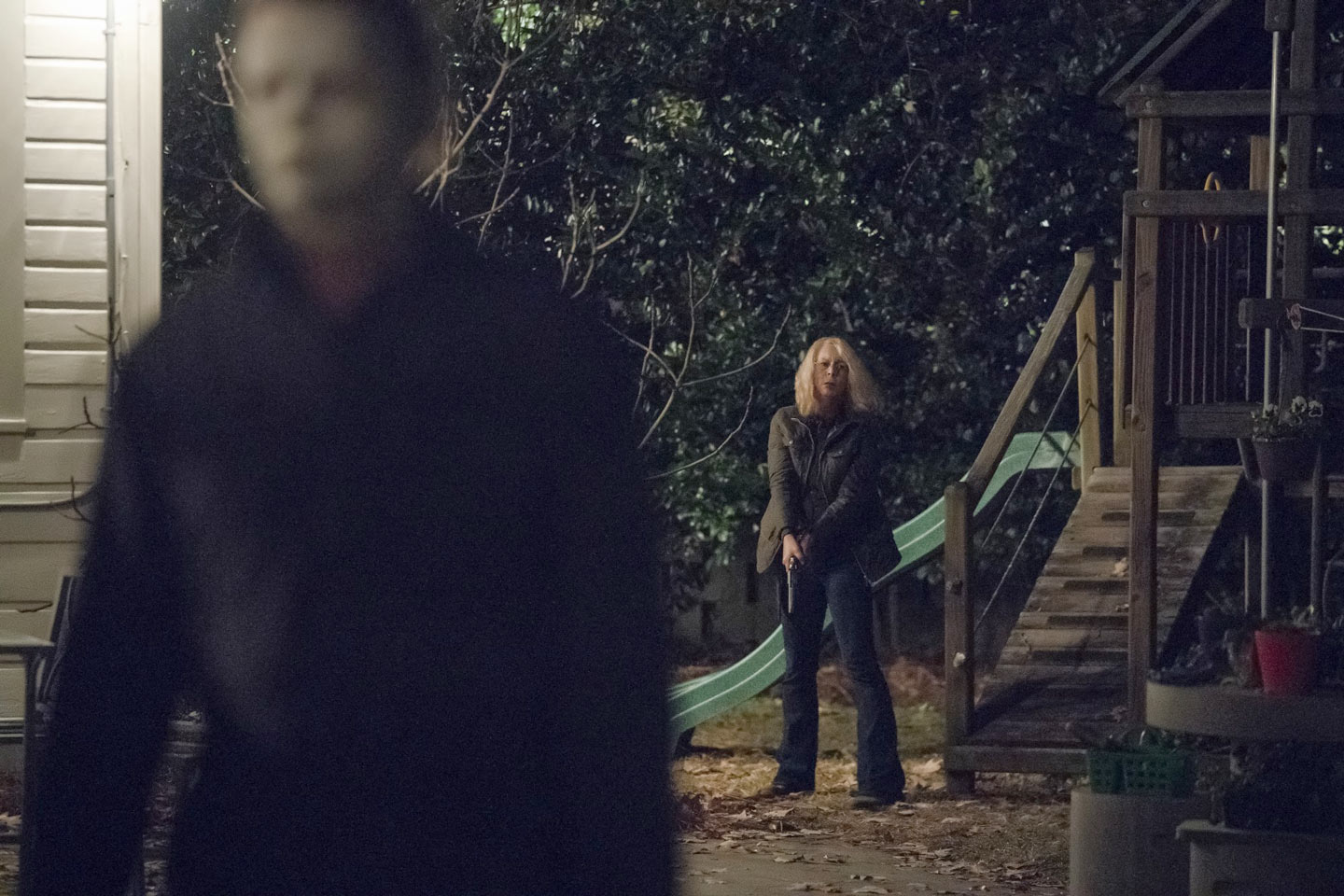 This makes Halloween basically a mash up of the best bits of all the previous Halloween movies as well as some other classic films. That is not necessarily a bad thing. Especially when it concerns a genre that has been done to death. The movie looks great and there are some nice shots. The scene where Michael puts on the mask again being one of the highlights.

There is another memorable moment as we follow Myers during his killing spree in a lengthy one-take scene in which he makes several victims. While movie certainly has its fair share of gore, it almost never is the focus of the movie. Most of the murders even happen off screen. There is one scene late in the movie that feels a bit out of place as it’s pretty over the top. Especially compared to the rest of the murders.

As a slasher movie, it does not stray far from genre conventions. The movie also has plenty of flaws in the plot and elements that could have just as well been cut from the movie. Two journalists who run a podcast only serve as a framing device and an excuse for Myers to get his mask back. The movie also has to divide its running time between three generations of Strodes. Most focus tends to lie on young Allyson since she’s the “final girl” in this movie. It’s her mother Karen who receives the short end of the stick, as she’s mostly a one note character, despite getting one redeeming moment in the final act.

The final scene is not as definitive as the ending of H20, leaving the door open for another sequel. But as this franchise has proven: no ending is ever definitive. Michael Myers can even come back after his head has been chopped off. So my guess is that this isn’t the last we have seen of him.