Upon its release Guardians of the Galaxy was a bit of the odd duckling of the MCU. It was also a fresh approach to Marvel movies at the same time. Instead of focusing on just one character, Guardians of the Galaxy focuses on a group of characters. Most of them not even human. Instead of taking place on Earth it takes place on different worlds in space. And if that is not enough deviation from the rest of the Marvel movies, two of the main characters are a talking Raccoon and a walking, talking tree. If that does not show what a different beast this movie is I don’t know what will.

The Guardians of the Galaxy are a group of characters each of them from a different planet and therefor species. To make things a bit relatable the main character is the legendary outlaw Star-Lord. A human who was abducted by an alien spaceship at a young age. He belongs to a group of outlaws who call themselves Ravagers. In the opening scene of the movie he’s on a course planet trying to obtain an orb which will function as a MacGuffin for the remainder of the movie. Everybody is eventually after this object and/or after Star-Lord himself.

At one point he and a group of characters that are trying to catch him end up in jail where they form an uneasy alliance together with an inmate who goes by the name of Drax The Destroyer. Subtlety is not this movie’s strongest point. As you can tell by the poster and the trailers, the alliance will be the base of what eventually become the Guardians of the Galaxy. And do not consider that to be a spoiler since it’s the title of the fricking movie. 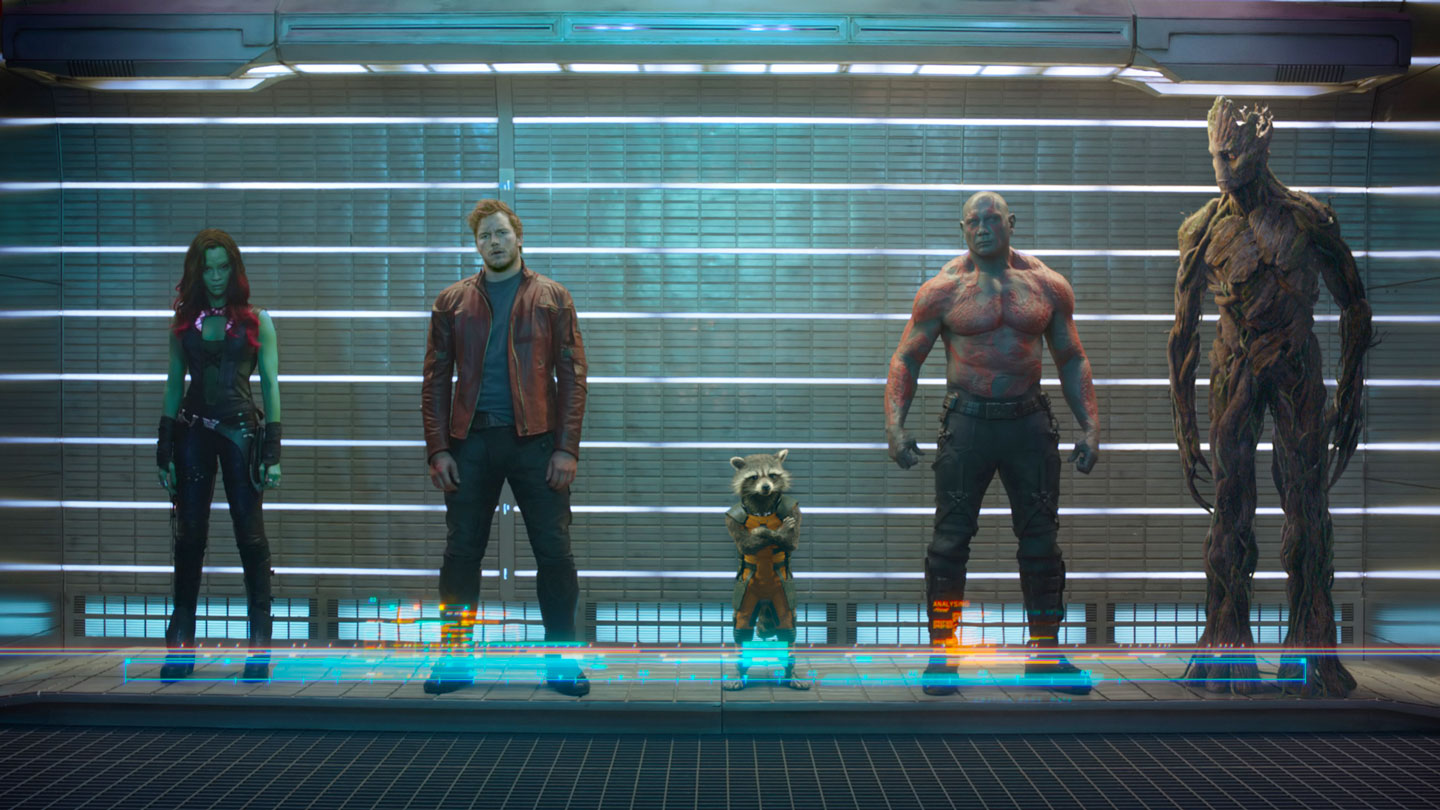 Guardians of the Galaxy ticks of all of the boxes you would expect from a movie like this. There is a group of characters who are forced to work together, an object everybody is after and a decent balance between character development and action scenes. And there is of course a bad guy out there who the heroes have to defeat. So herein lies the basis of an average movie, but Guardians of the Galaxy is an above average movie. This is where James Gunn comes in.

James Gunn is as much an odd choice for directing a Marvel movie, as the Guardians of the Galaxy property is a choice for making a movie about at all. It was a little known property and on paper seemingly quite a gamble. Gunn started off in the industry at the (in)famous Troma studio. Known for many low budget weirdo movies like The Toxic Avenger. Gunn himself was only known for movies like Slither and Super.

He definitely puts his stamp on this movie. More so than any other director in the MCU thus far. This is a beautiful Marvel picture with vibrant colors, a soundtrack full of needle drops and dialogue that seems to push what is possible under the Disney umbrella. There are actually semen jokes in this movie. 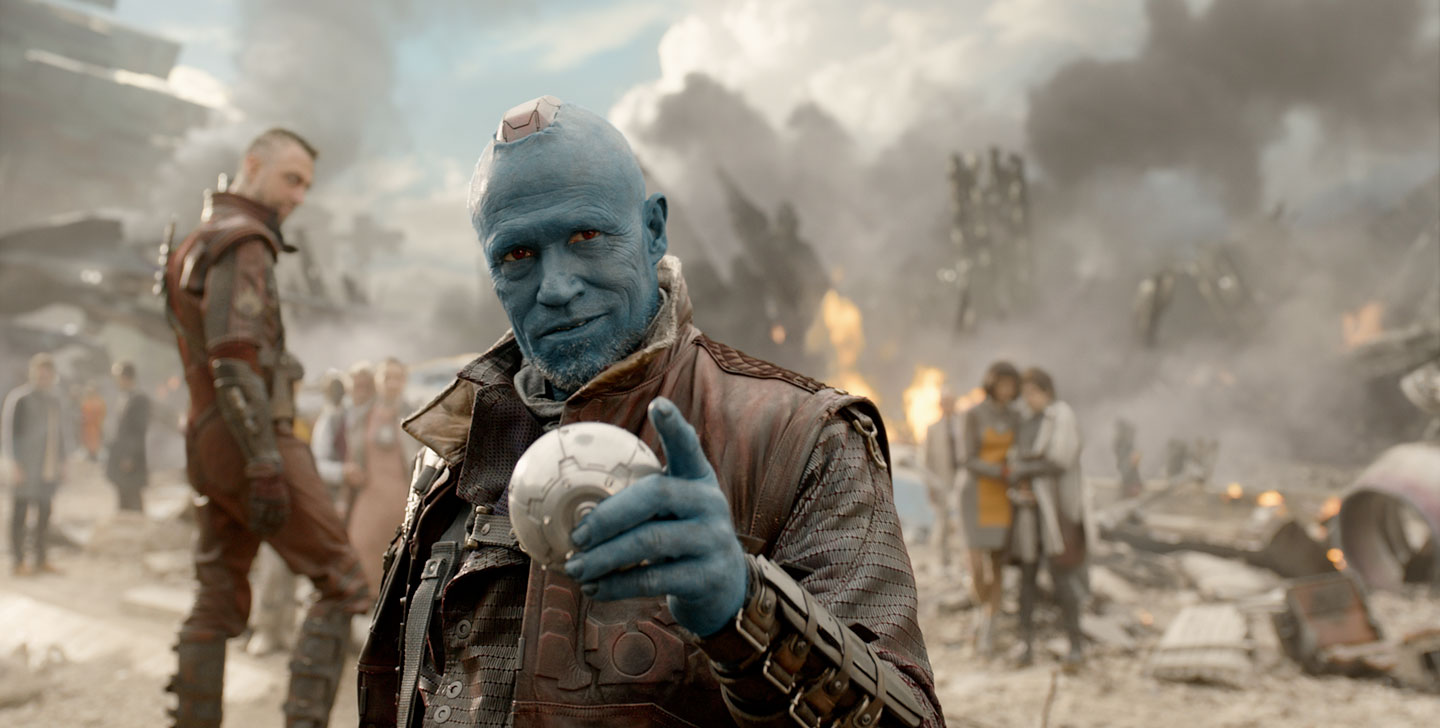 The casting choice of Chris Pratt as Peter Quill/Star-Lord reminds me of Michael Keaton’s casting in Batman. Both are actors known for their comedic roles before taking up the mantle as the leading man in a superhero picture. There was doubt when the chubby guy from Parks and Recreation was going to star in a superhero movie. Luckily we live in an age of personal trainers.

Unlike Keaton’s Batman the role of Star-Lord is one that plays more to his funnyman persona. Always quick with the quips, basically making him an intergalactic Tony Stark. Minus the whole genius part. 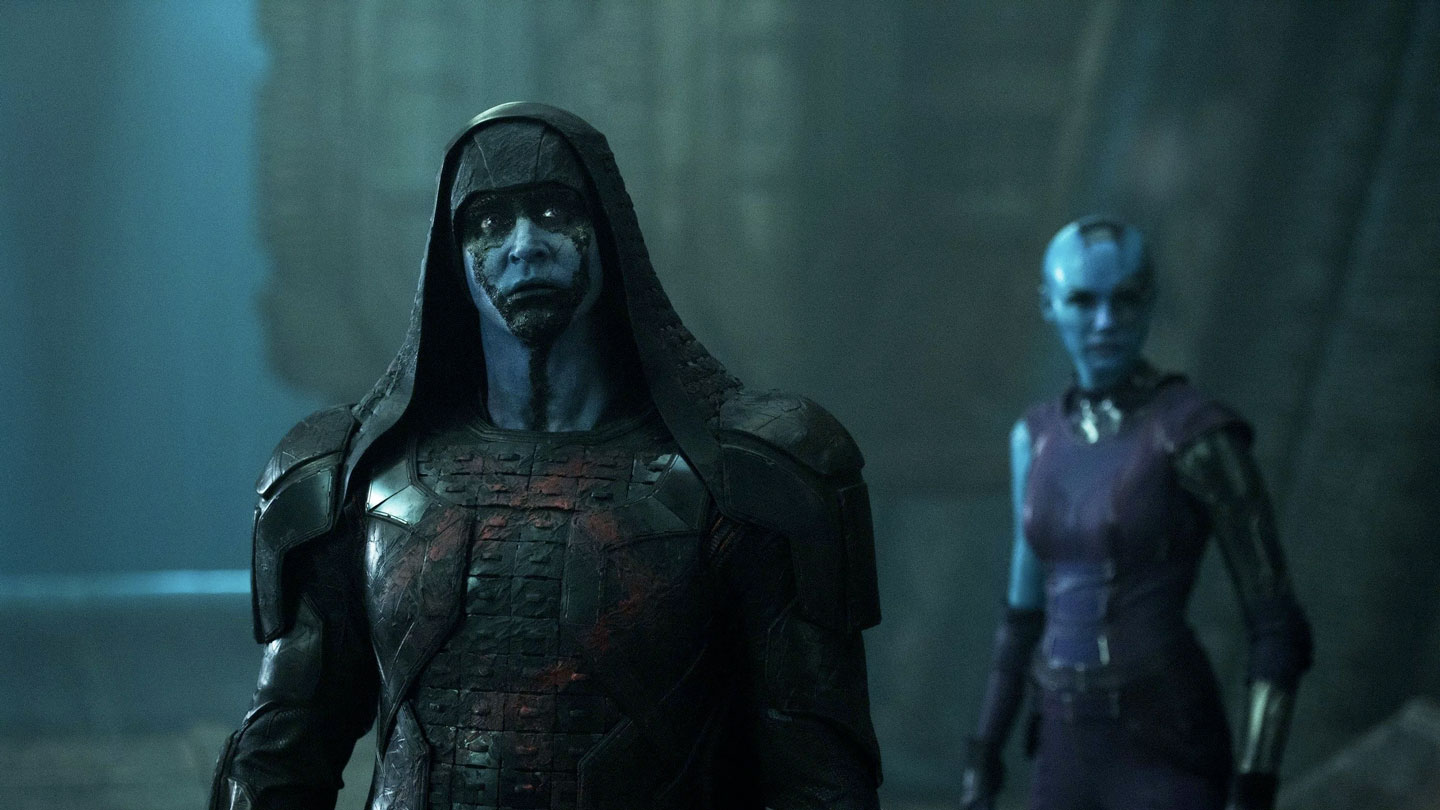 The weakest aspect of Guardians of the Galaxy is the villain, Ronan the Accuser. He is a stereotypical Marvel villain who has a goal of destroying or conquering something. In his case it’s the destruction of a planet he holds a grudge against. The most interesting aspect of his character is how he’s a puppet for Thanos. The same guy that ordered Loki to invade New York in The Avengers.

It’s funny to see now how this movie is actually setting up Infinity War. The Infinity Stones play an integral part, Thanos is actually a part of this movie though he still resides in the background and the movie introduces us to characters who would become a big part of both Infinity War and Endgame. Characters like Gamora and Nebula for instance.

Guardians of the Galaxy is one of the better Marvel movies, because it never feels like a Marvel movie. It’s a breath of fresh air. And that’s quite a feat considering it takes place in space.

Guardians of the Galaxy