“Good Morning… and Goodbye!” revolves around the marriage problems of Burt and Angel. Angel is Burt’s trophy wife; a much younger voluptuous woman he married after his previous wife, and mother to his 17-year old daughter Lana, ran out on him with another guy. Burt’s plumbing doesn’t function correctly, so he can’t satisfy Angel, much to her dismay. In order to have her desires fulfilled Angel has become somewhat of the town slut, making no secret of having sex with other men, while Burt is at home in bed alone. One day Burt discovers a sorceress in the woods who seduces him and fixes his pipes, making him the man he once was again. With his refound confidence he claims Angel for himself and confronts her lover Stone; the male version of the town slut who seduces every attractive girl he sets his sights on, if they are not already throwing themselves at him.

Russ Meyer’s second movie in his soap-opera period is one with a more coherent story than its predecessor Common-Law Cabin, despite the inclusion of Meyer-veteran Haji as a sorceress/witch running around in the woods unable to be seen by people other than Burt (Stuart Lancaster, another Meyer-veteran). After starring in Common-Law Cabin, Meyer has once again cast Alaina Capri as the main lead. Since he is exploring similar marital-problem themes as he did with Common-Law Cabin, Capri basically performs the same character in the both movies making her the Steven Seagal of Russ Meyer movies; different title, same character. She’s a strong female presence, who knows what she wants and does everything to get it, though be it mostly men. Capri certainly has the looks for the part as she’s gorgeous, but also has this fierce attitude and look in her eyes. She either disses people or seduces them, a woman you’d love to hate, but not hate to love. 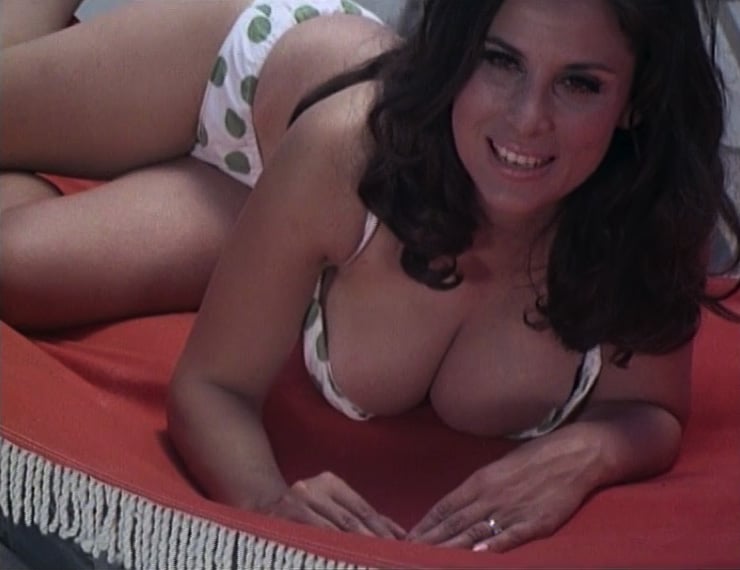 There are a couple of secondary story-lines about the relationship of Lara and Ray. The latter likes Lara but is susceptive to the seduction techniques of her stepmother Angel. Can you blame him? She’s only ten years older probably and has enormous sex-appeal. There’s also Stone who has no problem sleeping with married women, including the wife of his co-worker. This is the first appearance of the male pussy magnet in a Meyer movie, a character that would pop up in later entries such as Supervixens; the type of guy that just so happens to make any woman want him. In “Good Morning… and Goodbye!” you really see the regular Russ Meyer ingredients coming together and working their magic: buxotic strong women, the alpha male, the sharp and witty writing with a pinch of goofy humor.

The characters in “Good Morning… and Goodbye!” are cartoonish. Their actions wouldn’t make much sense in the real world, or at least not how they react to them; Burt is extremely passive about his wife being the town slut, Ray for some strange reason doesn’t want to have sex with Lana because she’s still a virgin. Aside from her unsatisfiable lust we don’t get to know a lot about Angel. The inclusion of the sorceress make the movie feel somewhat surreal and the way she’s constantly positioned in, on and around trees when Burt is driving through the forest seems as if we are watching a completely different picture all of a sudden. 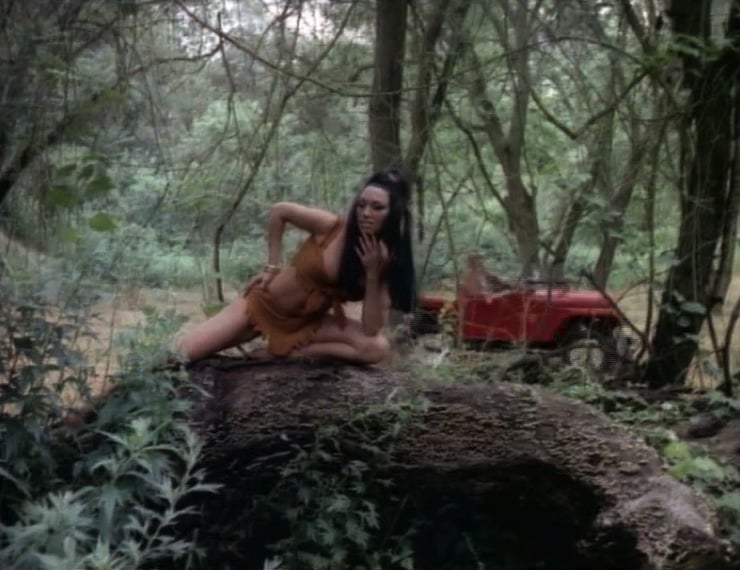 Meyer is known for casting big breasted girls, but once again keeps the nudity to a minimum. Even though the movie starts with a woman running naked through a field while a narrator is talking about sex, followed by Haji running naked through the woods while the narrator now talks about witches and magic it quickly tones down after that. Alaina Capri never went for full front nudity in her short-lived career, and while the first scene she appears in consists of her skinny dipping much like Lorna Maitland did in Lorna, much of it is obscured by the trees and water. Despite being one of Meyer’s most buxom actresses she’s a tease 90% of the time, always shot from behind or in such a way you only get to see a glimpse. Good thing we have Haji running fully nude during the end credits to make up for that, since Capri dominates the majority of the movie and even other women all keep their stuff under wraps except for the opening en end credits.

By now it’s pretty clear Meyer loves to work in the southern regions of the US. Most of his movies are set in the desert or in small countryside villages where the sun always shines. Therefor most of his movies have the same hot and seedy atmosphere and “Good Morning… and Goodbye!” is no different. This provides him with an excuse to have his actresses walk around in bikinis and other types of clothing that display their “talents”. It also is part of the reason movies like this could never be true drama; not only are the characters too cartoonish, by having the women constantly flaunting their big breasts it’s hard to focus on what they’re saying.

Being a part of the of the soap-opera period “Good Morning… and Goodbye!” is one of the less memorable movies Meyer made in his career. All the movies made during that period belong to the segment of lesser known movies by Meyer never gaining the cult-status of Faster, Pussycat! Kill! Kill!, Beyond The Valley Of The Dolls or his later soft-core period consisting of movies like Up! It’s a decent entry, and apart from the sorceress element, quite coherent. Then again, would it be a Russ Meyer movie if it didn’t have such an element?