Recently I watched two movies that have much in common, yet the difference between the two movies is as night and day in terms of quality. I’m talking about The Matrix: Resurrections and Ghostbusters: Afterlife. Both movies are direct sequels released more than a decade after the previous installment. Both have large parts of the original team behind the movies returning and both heavily try to evoke the emotion of sweet nostalgia. But only one of them succeeds and that is Ghostbusters: Afterlife.

The third Ghostbusters movie revolves around a single mom (Carrie Coon) and her two kids who arrive in a small town of Summerville after her father died. Mom hopes there is some sort of value in the inheritance as the family has just been evicted from their own home. But the house of her father doesn’t look all that great, is filled with weird stuff and is dubbed the “Dirt farm” by all the locals. Her kids are both teenagers. 15 year old Trevor (Finn Wolfhard) and 12 year old Phoebe (Mckenna Grace). Trevor is an average teenage boy, the type that applies for a job at a local diner just because a girl whom he fancies works there. Phoebe is a different breed. She shows sign of autism as she is highly intelligent but socially awkward. Slowly they find out that their estranged grandfather lived at Summerville for a reason and also discover that he is one of the original Ghostbusters along the way.

Long story short: the two teenagers find his equipment and quickly figure out how the stuff works without even having to go on YouTube for a tutorial by some random Indian guy. Trevor fixes up Ecto-1 just in time for them to go after the ghost sightings that suddenly starts appearing all over town. While it might some pretty coincidental that the ghosts appear at the same time the two kids are in possession of a proton pack, a ghost trap and Ecto-1, it actually makes sense looking at the overall plot of the movie. It doesn’t feel shoehorned in at any moment.

What the movie also has is a heart. Unlike the cynical feminist cash grab that was 2016’s Ghostbusters, this movie was made by people who have a passion for the property. Jason Reitman takes over the directorial duties from his dad Ivan who directed the first two movies. The original cast also returns for an extended cameo including even Annie Potts as Janine Melnitz and a couple of others which I’m not going to spoil for you. There are even some familiar faces among the ghosts. 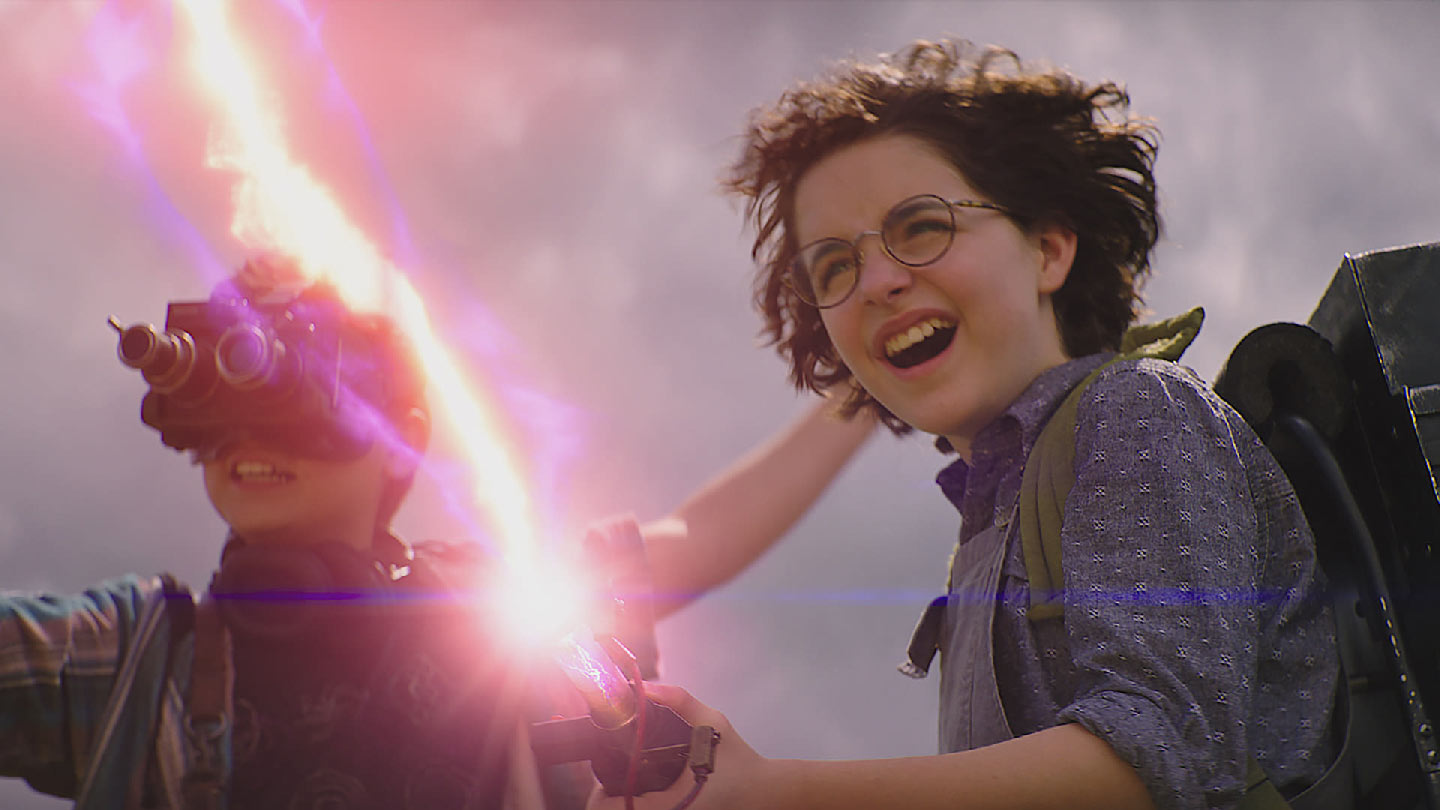 Ghostbusters: Afterlife does throw a lot of memberberries at you, but it doesn’t go as far as The Force Awakens which was basically a remake of A New Hope but with a female lead. But these memberberries taste sweet and when Trevor takes out Ecto-1 for the first time I couldn’t help but smile. I don’t consider myself to be an easy audience and I had my reservations when it came to this sequel. As I do with most sequels that are a direct follow up to a movie only the older crowd knows. Most of them tend to fail to live up to 20+ year built up hype.

But to be honest, Ghostbusters: Afterlife isn’t the third Ghostbuster movie the fans of the original two hoped for. But after the passing a Harold Ramis all hopes for that movie went out of the window anyway. A movie with the original remaining three Ghostbusters wouldn’t have worked. If their cameo is good for anything it’s us convincing of the fact that new blood is the way forward.

The other gripe I have with Ghostbusters: Afterlife is the setting. The shift from New York to the small town of Summerville is a breath of fresh air, but at the same time it also pushes the movie in Thor/Masters Of The Universe territory. A movie with a pretty large scope taking place in small town USA feels like a low budget production. In Masters Of The Universe (1987) Dolph Lungren’s He-man is sent from the fantastical Eternia to a small town where he runs around for the majority of the movie. In Thor, the God of Thunder walks around a small town for the majority of the movie leaving the fantastical world of Asgard behind him and out of the movie.

Ghostbusters: Afterlife isn’t much different, with the kids running and driving through the town and some outdoor locations and not much else. The town also feels strangely deserted, save for a scene at the diner. Most of the time when the movie takes place in the town center only a handful of extras can be seen. This reminds me of Hellraiser III which contains a scene of the Cenobites roaming the streets of New York without any people or traffic to be seen. That is pretty much the case here as well. There is also a scene in which Paul Rudd’s character goes to a giant Walmart and he’s the only customer in the entire store. There isn’t even a single employee in the store.

Aside from that I was thoroughly amused with Ghostbusters: Afterlife all the way through. If you’re a fan of the original two movies, Afterlife will probably be to your liking. You might even shed a tear during the final scene. A big budget CGI-filled movie spectacle that is able to pull on the heartstrings is movie-making done right.