After three summers of Friday The 13th movies, the series took a brief a hiatus. Skipping a year, the fourth movie dumped the numbering in the title and promised us one final outing: Friday the 13th: The Final Chapter. So this is it. The final movie in the series. No more Friday the 13th movies after this one. This is my final review of this franchise.

I’m kidding of course and so were the people of Paramount. This was hardly the last Friday movie to come out. Funny how little the title means in retrospect, when there are now 7 direct sequels to this movie. That’s including Freddy vs. Jason. Back in 1984 people did expect to see the final outing of Jason Voorhees. In a way that turns out to be true. After this movie, Jason would come back as an unstoppable Zombie. “Friday the 13th: The Final Chapter of Human Jason” is a more suitable title. Not quite as catchy though.

Friday the 13th: The Final Chapter is a direct sequel to the previous movie. It picks up right after part 3 at the barn where Jason has met his demise. Emergency services are on the scene. Bodies are being taken to the morgue including the supposedly dead body of Jason. A thorough investigation of the crime scene is being done. Well not quite. As soon as the paramedics leave the scene the whole barn is ignored. Not even one yellow police line to be seen. A bit strange considering this guy has been killing people for at least the last two days.

The story is again largely the same, as is the case with most slasher movies in general. Once again a group of young teens is heading off to a remotely located house in the middle of the woods for a short vacation filled with the usual pastimes. Skinny dipping, smoking pot, drinking, partying and having sex. Somehow these kids totally miss out on all the news reports about a serial killer roaming the grounds of these woods. If this movie was made today their Facebook feeds would blow up. 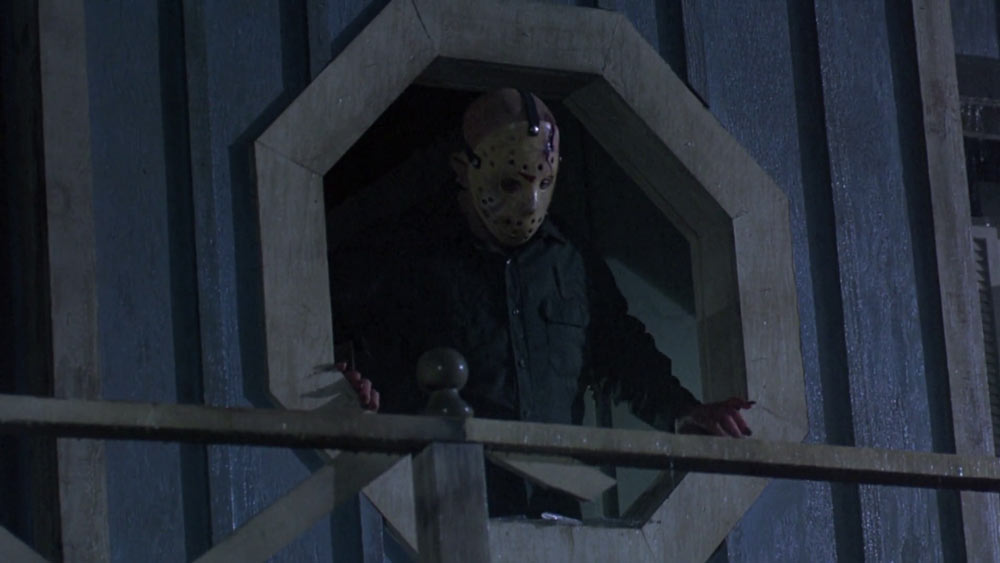 There is a little detour at the beginning as Jason ends up in the morgue at a hospital. After killing off a couple of staff members he manages to get back to the woods surrounding Crystal Lake with ease. Jason’s walking skills are extraordinary. In part 2 he manages to track down the survivor of the first movie wherever she was living. In this movie he manages to walk back all the way from the hospital to the woods within a couple of hours. For being such a remote location, everything seems to be well within walking distance from Crystal Lake.

There’s also a new element thrown into play here: the Jarvis family. Little Tommy (Corey Feldman) and his mother and sister live in a house deep in the woods. Next to the house where the aforementioned teens are staying for the week. Tommy is a bit of an odd-ball as he makes monster effects like masks as a hobby. But these were the 80s and that is what kids did before the age of the internet. There’s also a direct link with the second movie as Sandra’s brother pops up, hellbent on revenge after hearing that the guy who murdered his sister escaped from the morgue.

The teens staying at the house next to them are a colorful bunch. There is a couple of which the girl is abstinent which causes some friction. There is a couple who is sexually active and two guys who tend to be a bit nerdy. This group meets a couple of female twins along the way which nicely balances the scales of the male/female ratio. 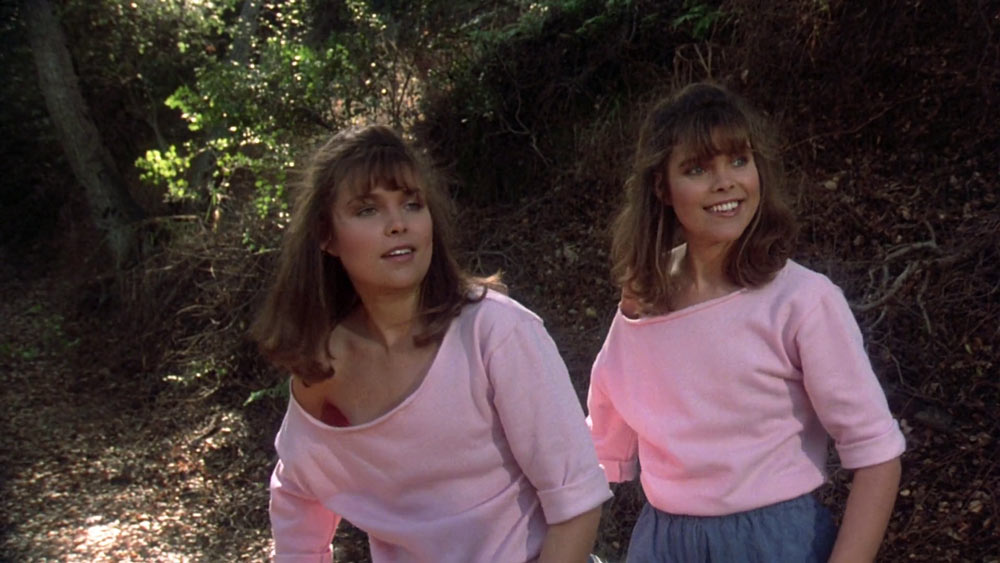 Quite the large cast for Jason to work through as you can tell, and that he does. Friday the 13th: The Final Chapter has the largest body count of the first four movies. A number easily topped with subsequent films, but Jason is still a rather busy bee here. The death of one of the nerdy guys probably being the highlight. First he receives a corkscrew through his hand, then a meat cleaver to the face. Later on Jason also manages to nail this guy over a door blocking an escape route.

This brings me to the more goofy aspects of the movie. In the previous movies Jason took out people who were secluded from the rest. This would then result in a reveal scene in which the final girl comes across all the bodies he left behind. While it takes some suspension of disbelief that people can be missing for hours and all the people are shrugging it off, it is not entirely unrealistic. Friday the 13th: The Final Chapter takes it to a whole new level.

All the teens are in one house, and somehow no one has a clue that there is a big hulking guy killing off everybody one by one. And these aren’t the most quiet kills either. The meat cleaver to the face? That happens in the kitchen while there are people in the living room next to it. Then he appears outside of a bedroom window, breaking it and throwing out one of the twins on top of a car. He nails a guy to a door without anybody hearing this. This would only be realistic if these teens were all deaf. 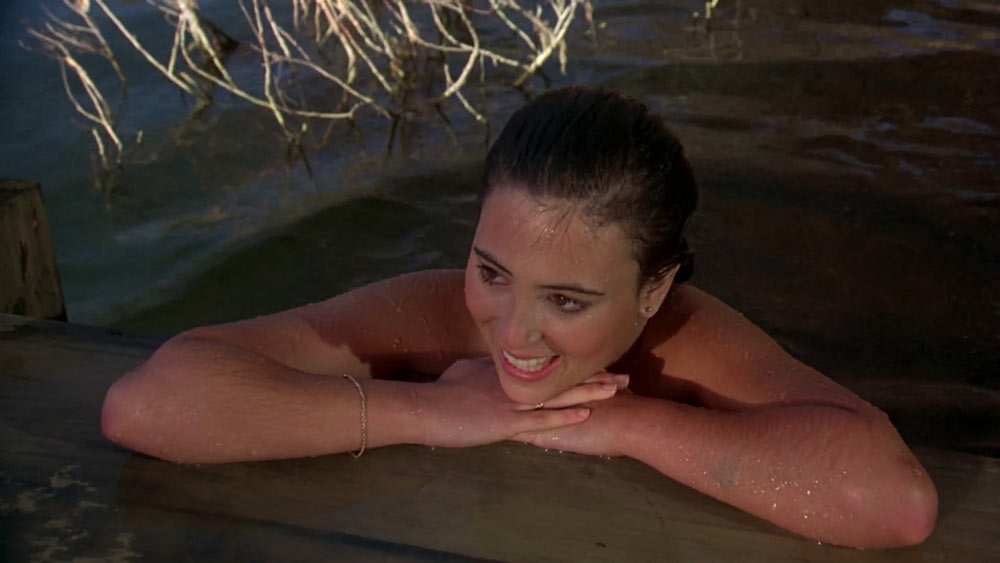 Next to the large amount of kills, this movie also has more nudity in it than usual. Making up for the off-screen skinny dipping scene in part 3, this movie includes two of those scenes. There is even a callback to part 2 with a girl going for a nightly naked swim. Because that is what teens also did back in the 80s: Naked night swimming.

Friday the 13th: The Final Chapter is one of the better movies in the franchise. Director Joseph Zito brings an expert touch to the franchise and makes the film look less like an exploitation movie as the previous movies often did. For instance, the rainy outdoor scenes at night are very atmospheric. Tom Savini, the special effects guy responsible for the first movie, returns and gives us some of the coolest effects yet. The image of Jason’s head sliding down a machete has become a classic moment in slasher history. 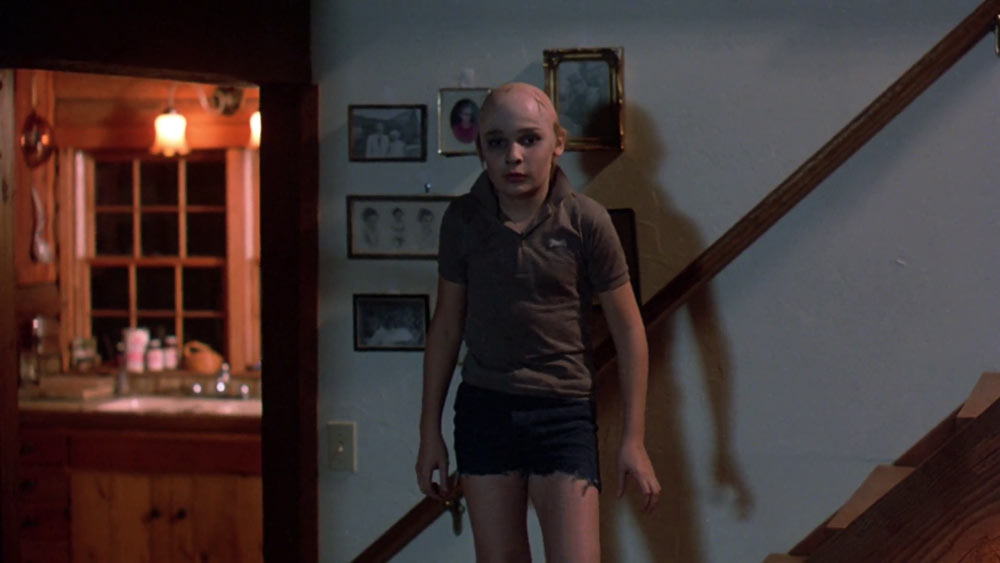 Even the teens in the movie are characters that you actually kind of care for. They aren’t overly developed, but you aren’t rooting for Jason to take them out. There isn’t an annoying prankster among the teens, no bitchy hot chick or the hunk who is a dick. This is just a group of friends who have fun together and meet a couple of friendly hot twins along the way.

If this truly was the final chapter, than it would have been a good end to a short-lived series. The movie did have an open ending with Corey Feldman looking all psychotic in the camera hinting that he could take up the Voorhees mantle. A theme that the following movie in the franchise did pick up on. But as just one of many Friday the 13th movies, it actually stands out and has several of the most memorable characters of the franchise. Feldman of course, but also Crispin Glover as Jimmy. The scene of him dancing is a YouTube classic, much like Van Damme’s dancefloor moves in Kickboxer.

Funny thing though: this wasn’t the last time they promised us a conclusion to the Friday the 13th series they didn’t keep. 9 years later they would release Jason Goes To Hell: The Final Friday. After that we got another two movies and a reboot. So let this be a learning experience: never trust a movie studio when they say a certain movie is going to be the last in a series.

Friday the 13th: The Final Chapter