The previous Friday the 13th movies have their share of false advertising. Especially part 4 which is titled The Final Chapter. It wasn’t. Friday the 13th Part VIII: Jason Takes Manhattan is probably the most infamous of all the Friday the 13th movies when it comes to marketing. Even though Jason looms over the skyline of New York on the movie poster, very little of the movie actually takes place in New York. The majority of the movie takes place on a cruise ship. “Jason Takes The Titanic” would be a better title. It’s not that the ship in the movie is named The Titanic, but for marketing reasons they should have. 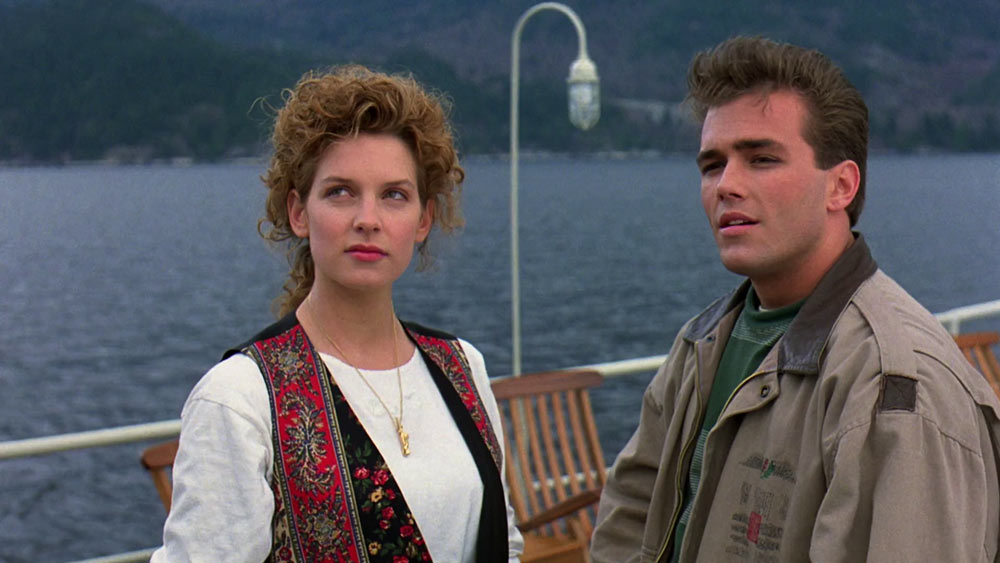 Slasher movies have never been the most original movies. Almost each one feels like a copy of something else. Often something better. The Friday the 13th movies became parodies of themselves with installments like A New Beginning which was a Friday the 13th movie stripped down to its bare essentials. They even made an actual spoof of the genre and this series with Jason Lives. By far my favorite movie of the series.

Friday the 13th Part VIII: Jason Takes Manhattan revisits many of the tropes the previous movies contained. Jason is lying dormant at the bottom of Crystal Lake just like he did in The New Blood. He is resurrected by electricity just like in Jason Lives. There is again a contrived way he receives a new mask since it was destroyed in the previous movie. Funny enough with the same cut in the top right. Do they sell these masks as merchandise or something?

After the resurrection Jason hops on board of a cruise ship which is about to head to New York. This means Crystal Lake is somehow attached to the North Atlantic Ocean. Continuity has never been this series’ strong suit, now it seems geography isn’t as well. Luckily for Jason this ship is filled with high school graduates and a crew giving him some time and people to kill along the way. 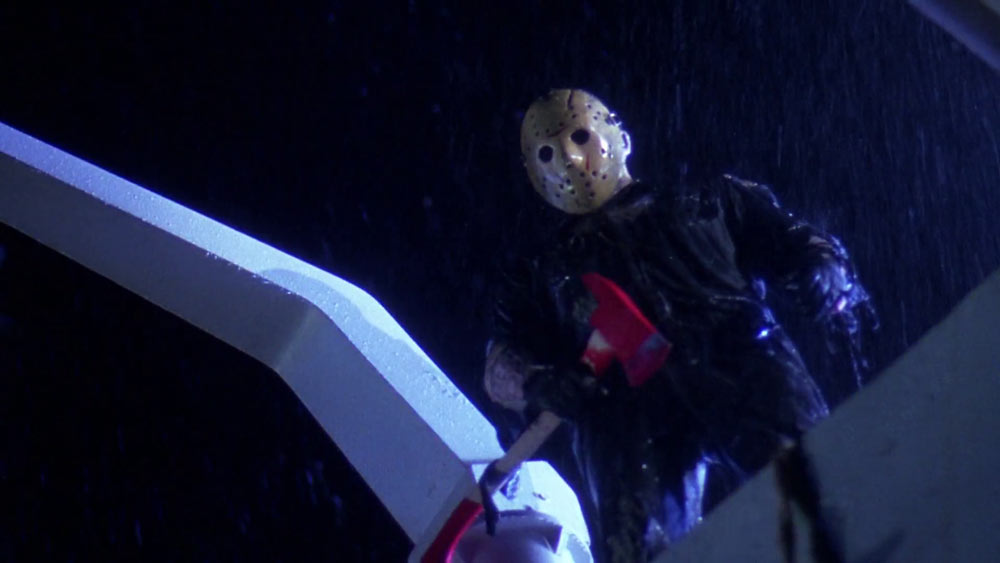 Friday the 13th Part VIII: Jason Takes Manhattan is hurt by its low budget. Most of the action takes place on the ship and even then it’s painfully obvious there was not much room for elaborate things. There are a bunch of extras in the establishing scenes. They disappear as soon as the boat leaves shore. The graduating senior class consists of only a handful of kids assisted by merely two teachers. The entire crew of the ship consists of only three people. That includes a deckhand who constantly says everybody on the ship is doomed, yet never decides to stay on shore. At least Crazy Ralph left on his bike after warning people in the first movie.

The movie reaches its main selling point, Jason in New York, after more than an hour into the movie. Even then a lot of the action takes place on the docks, in alleys, in subways and all kinds of generic locations with Vancouver standing in for New York. This kind of bugs me since it seems that more of the movie could have been set in a city-like environment if they have another city standing in for New York. There are actually only one or two scenes that are actually shot in the middle of Times Square. Of the 100 minute Jason Takes Manhattan, there are only two minutes of actual Jason in New York in the movie.

Once in New York it should have been a slaughter fest. But Jason ignores almost every New Yorker he comes across. He keeps on stalking the last few people from the boat, ignores every passenger on the subway and he doesn’t kill anyone in Times Square. His only two New York victims are a couple of junkies and a cop. The scene with the junkies actually turns him somewhat into a hero. 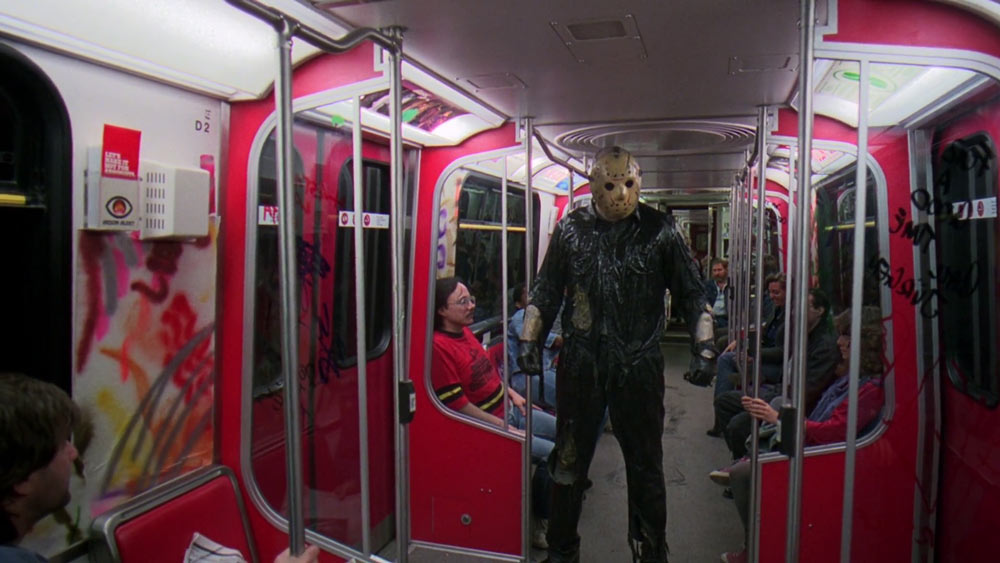 The protagonist in Friday the 13th Part VIII: Jason Takes Manhattan is a girl named Rennie. One of the teachers is also her legal guardian. I’m not sure about the rules, but it seems to me there is some conflict of interest when a teacher also functions as your parent. It doesn’t have much to do with the story, other than set up some of the other students against her. She also has a back story in which she almost drowned in Crystal Lake as a kid when she was pulled down by a little boy. A boy she believes to be Jason. If you follow the established timeline that hardly seems possible. This movie is set in 2002 and Jason drowned in the 1950s. Throughout the movie she has visions of this boy as well as the classic horror movie trope of water turning into blood.

The rest of the cast are stock characters. The group of students consist of nerds, bitches, outcasts and jocks. The usual bunch of characters you see in these movies. None of them are memorable. One girl character really draws the short end of the stick as she’s killed off immediately after the introduction scenes of all the students. She has maybe three lines in the entire movie.

Speaking of lines; since this movie was made in the late 80s they finally replaced pot with cocaine as the drug of choice for these teens. It took them 8 movies, but finally the standard stoner character has been replaced by a coke snorting bitch. It’s funny how the type of drugs people use in movies also reflects on their character personality. Pot users are often care free people and/or hippies. Coke users are arrogant and uptight. Heroin users are always junkies. 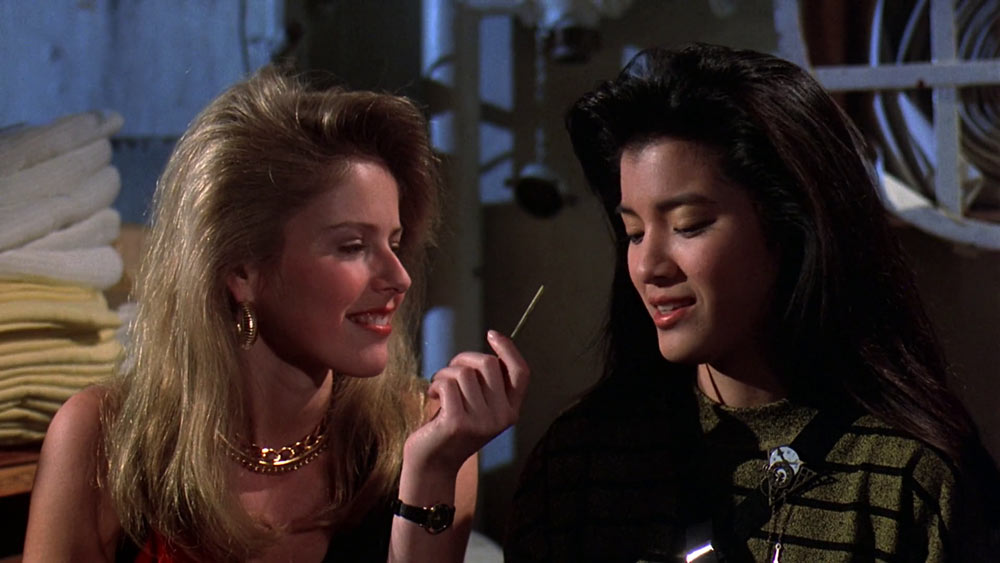 But a movie like this isn’t about well written characters. It’s about the kills. There are a couple of nice ones here, including Jason knocking a guy’s head off which then ends up in a dumpster. The gore is sadly largely absent, but Kane Hodder gives a nice performance as Jason. The awesome look of Jason in The New Blood has been largely abandoned. Somehow Jason’s clothes went from green to black between this and the last movie.  It has also automatically been restored at several places. No exposed spinal column this time. Even the look of Jason’s face has been completely redone. For the worse since it looks like shit.

There is a certain change of structure here as the people on the boat quickly find out there is a killer among them. Usually these movies tend to rely on the final girl to discover all her dead friends. Here it’s a group effort against Jason for once. It’s a welcome change. Until he’s discovered the movie does rely much on Jason simply appearing wherever someone secluded from the group is. It even goes as far as Jason being able to teleport now. Or it at least seems that way in certain scenes. 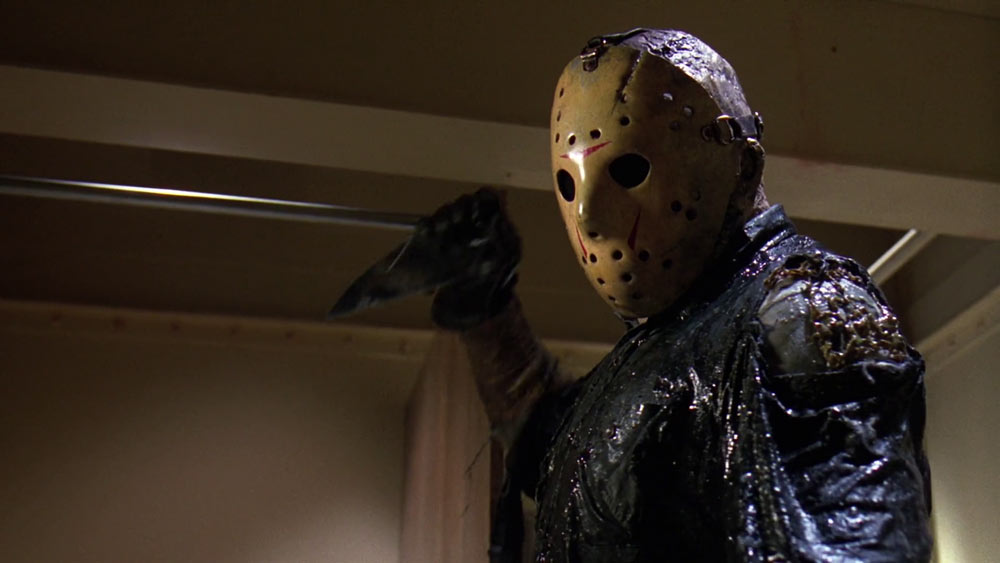 Friday the 13th Part VIII: Jason Takes Manhattan could have been a great and fun entry in the Friday series. But the lack of New York in the movie, the ugly look of Jason and ridiculous elements in the script (apparently toxic waste is being flushed through the sewers of New York each night) make this a disappointing final outing of Jason under the Friday the 13th brand. Too bad they did not send him off with a bang. It would take five years and another movie studio to finally make a “Final Friday”.