Friday the 13th Part VI: Jason Lives is the fourth outing of hockey mask wearing serial killer Jason Voorhees. If Halloween 3 proves anything it’s that there should be as little tampering as possible with this type of movie. It didn’t sit well with the audience that it wasn’t Jason but an Ambulance driver behind the hockey mask in Friday the 13th: A New Beginning. A movie I found to be the a Friday the 13th movie stripped to its bare essentials. So the sixth Friday the 13th movie promises us one thing right from the start: the return of Jason.


If you can recall Jason met his demise at the hands of Trish and Tommy Jarvis at the end of the fourth movie: The Final Chapter. If there ever was a piece of false advertising, it’s that title. The next movie actually stayed true to the fourth movie by having someone else than Jason be the killer. It also kept in tune with the ending of part four where it was hinted that Tommy could become a killer himself. Friday the 13th Part VI: Jason Lives however, completely ignores the whole “Tommy might become a killer” angle. 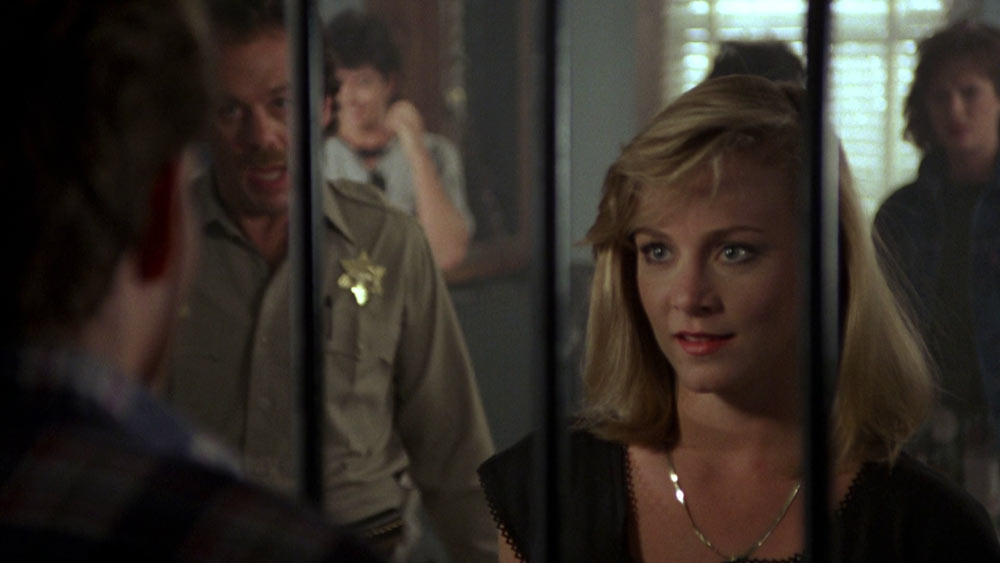 Instead it resurrects Jason in an opening scene very similar to the opening scene of the previous movie. Only this time it’s not a dream sequence. Tommy, in his infinite wisdom, thinks it’s a good idea to dig up the grave of Jason to see if he’s really dead. And also to do some amateur cremating. While witnessing the decaying body of Jason he goes mental and rams a metal rod through Jason’s corpse. But then lightning strikes, shooting some bolts of electricity through Jason’s body and resurrecting him. Now an unstoppable zombie, Jason is loose once again.

Ten years before Scream was released Friday the 13th Part VI: Jason Lives did the same thing: being a parody of the slasher movie genre. All of the previous movies, as well as other slashers took their material serious. They were dark in their approach with little room for humor. That’s not the case with Jason Lives. The movie is chock-full of references to other movies and physical gags. 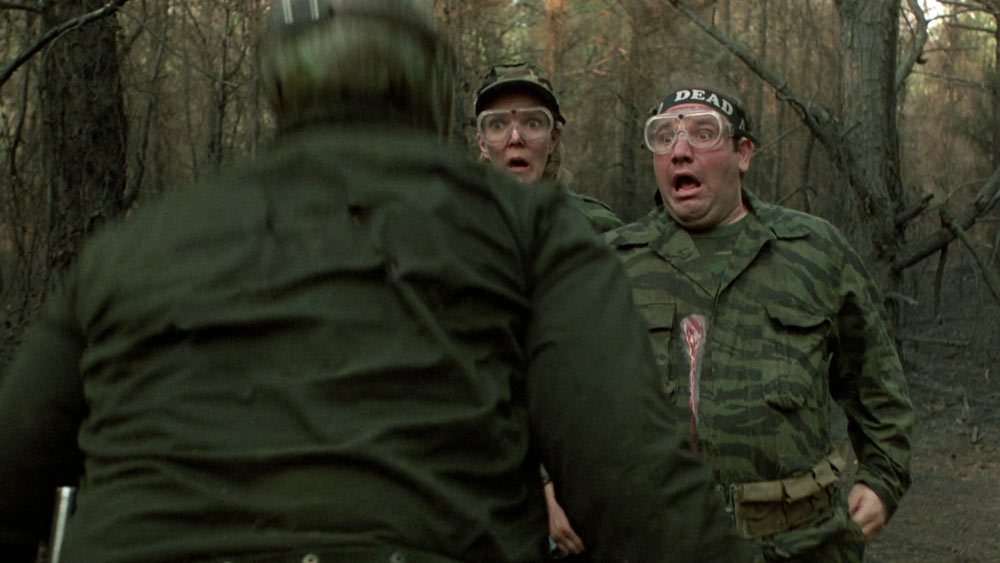 The opening scene where lightning resurrects Jason is a direct reference to Frankenstein’s monster. Once he puts on his trademark hockey mask we zoom in on his eyes and the movie gives us a parody of the James Bond barrel shot. But now with Jason throwing a machete to the camera.

That is just the beginning. Throughout the next 80 minutes people talk directly to the camera, people basically acknowledge they are in a horror movie and there are several slapstick situations. A scene with a group of accountants having a paint-ball game in the woods being the highlight. But Jason’s murders have also a more comical approach to them instead of just being about the gore. He punches through people, rips arms off and snaps people in two. This might sound gruesome, but Jason constantly looks surprised about his new immense strength giving the audience a reason to laugh. 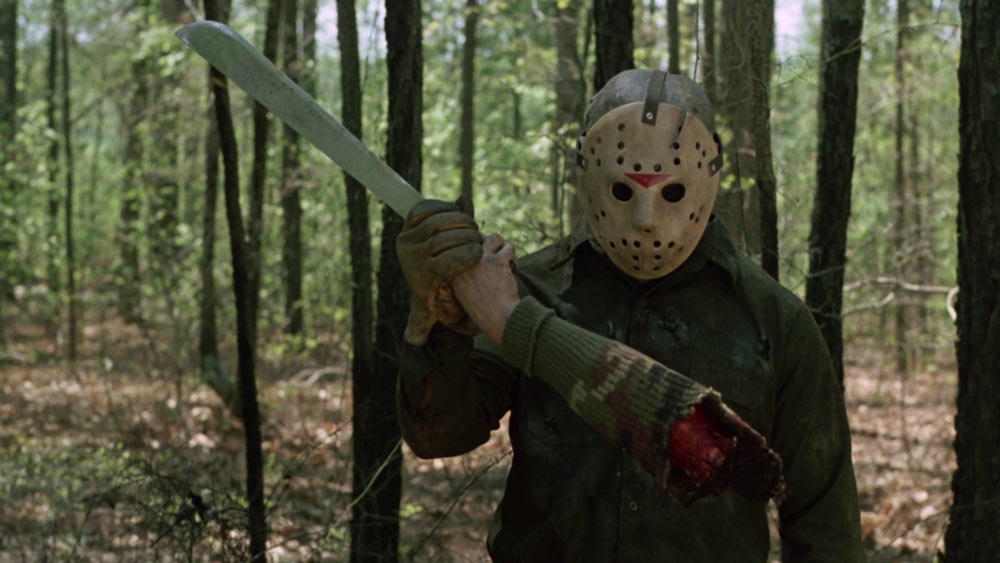 In a way this is the spiritual predecessor to Jason X. The last Jason movie before the series got a reboot. While most people hated that movie, it does have the same meta approach to the character of Jason and slasher movies in general as this movie. I love both these movies, but Friday the 13th Part VI: Jason Lives is the better movie of the two.

It’s just not the humor that works for this movie. It also has some tight direction and a grander feel. Most of these slasher movies feel very contained. Often taking place in a secluded area or sometimes even just a house. Friday the 13th Part VI: Jason Lives has a more epic feel to it. There are multiple car chases, plenty of law enforcement around and even a mobile home getting trashed in a way that would make the A-Team proud. 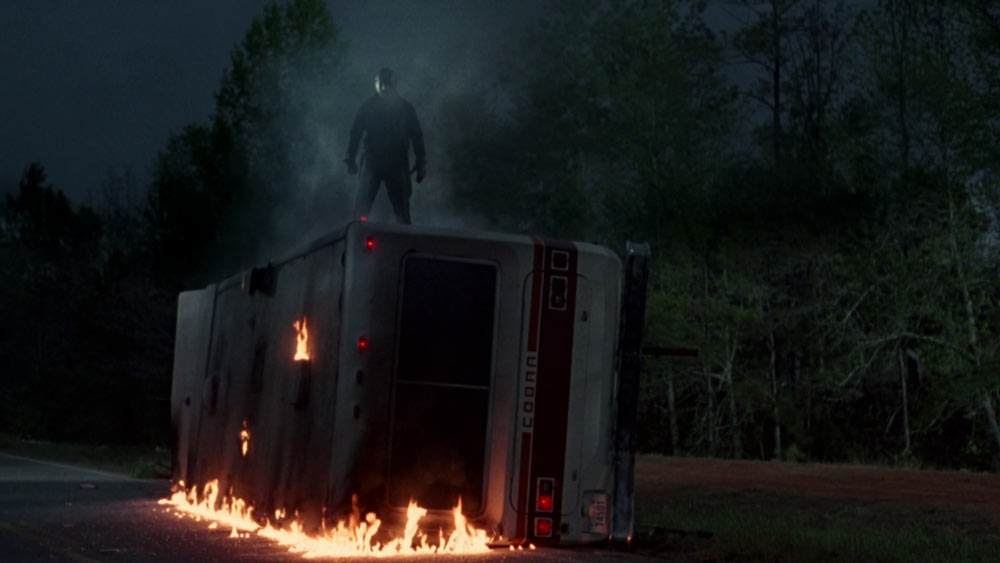 This is probably the best Friday the 13th movie of the bunch. At least in my opinion it is. The movie has a great atmosphere and it’s visually better than most of the movies in this franchise. There are also actually kids staying at this camp for once. This is rather unique to the series. Most of them time in these movies that counselors are all dead before the kids come. But it’s still a Friday the 13th movie; a simple formulaic slasher movie that doesn’t offer much else.

Most of the cast are just standard slasher movie tropes. Like the ignorant sheriff who doesn’t believe it when someone comes claiming there’s a madman on the loose. The cast is a little bit less stereotypical this time around. Most of the camp counselors are normal teens. No pranksters, sex pots, drug users or anything. This makes them more real, undeserving of Jason’s wrath, but also rather bland. In fact, I can’t even remember their names and I’ve just seen this movie.

If you ever watch a Friday the 13th movie, I recommend you watch this one. It doesn’t have the most graphic kills or contain nudity (this series’ first), but it’s a fast paced and very entertaining slasher movie that doesn’t take itself too seriously.