Friday the 13th Part 2 is the lazy titled sequel to Friday the 13th. The release date was within less than a year after the original. It features a similar storyline in which another batch of camp counselors are killed off one by one. Again by a member of the Voorhees family: Jason. Yes, the same Jason whose death was avenged by his mother in the previous movie. He apparently saw everything. And with everything I mean the finale of the previous film where his mother was decapitated by Alice. According to the rumors he was living in the woods all these years. This brings the whole franchise to a certain paradox: Mrs. Voorhees went on a killing spree to avenge her supposedly dead son Jason. When she was murdered it triggered Jason to go on a killing spree. But she would have never been murdered if she never went on a killing spree, and she only went because she thought her son was dead. What a shitty situation this all is.

Friday the 13th Part 2 takes place five years after the events op the previous movie. It should be 1985 according to my calculations, but the tombstone of Mrs. Voorhees  states that she died in 1979. That is strange because the first movie takes place on June 13. In 1979 June 13 fell on a Wednesday whereas June 13 fell on a Friday in 1980. This is the first occasion where dates of the movies don’t really add up. If you love a tight continuity, the Friday The 13th movies are not for you. All of the movies can be considered sci-fi movies as they apparently all take place in the (near) future. It only takes until Jason X before they truly embrace it.

I spoke about how Friday the 13th built the slasher formula on the foundation of Halloween. Friday the 13th Part 2 introduces a few new tropes to the formula. Most notably the disposal of survivors from the previous movie. This a controversial choice. What’s the use of people surviving one installment if they are killed in the opening scene of the next? Often killed without any special treatment. Movies like Halloween V and Halloween: Resurrection did the same thing. This movie kills off Alice in a lengthy opening scene as well as Crazy Ralph. But only after he has warned people about how they are doomed again. I’m going to miss Ralph, he could have been a great recurring element in these flicks.

The opening scene summarizes the finale of part 1 since Alice is having nightmares about those events. My guess is they did this because home videos were probably not really mainstream back then and this movie came out within a year of the previous one. It’s a quick way to get the audience up to speed, but when you watch these movies in a short time-span this feels repetitive. 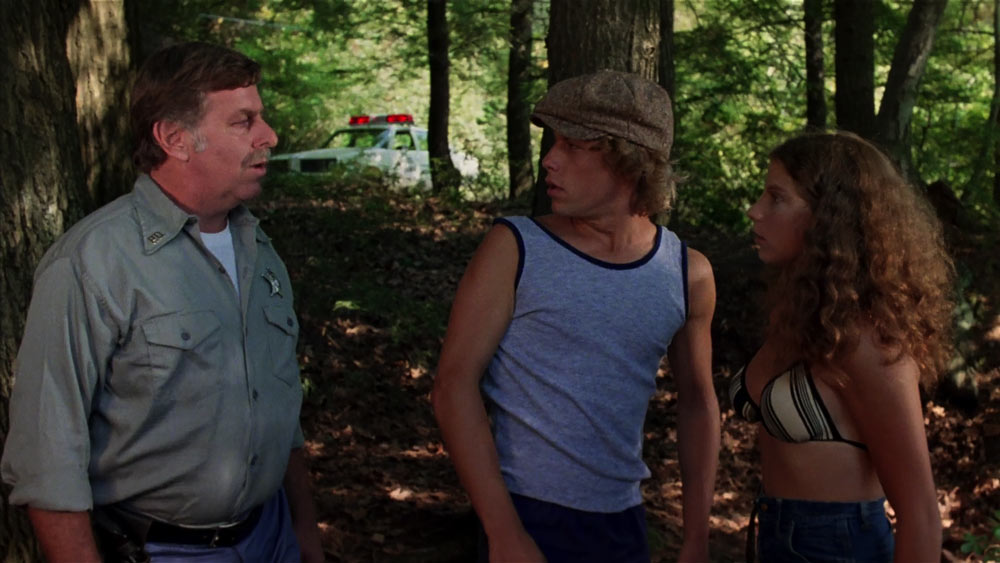 After 15 minutes we finally get to meet the current cast. It’s a large cast actually and the movie takes place at a different summer camp which is also located at the same lake. The group consists largely of the same characters that you always see in these movies. There’s camp leader Paul, the final girl, some pretty boys and girls and a prankster. There is also a guy in a wheelchair which seems weird considering the location. Why would someone in a wheelchair spend his summer in a forest? The only thing missing is a token black character.

The final girl in Friday the 13th Part 2 is Ginny (Amy Steel), who is studying to be a child psychologist. She’s the only one to have something of a backstory so you know right off the bat that she will be with us until the end. In a weird shift of events Ginny is actually shown changing clothes and she has sex with her boyfriend, the camp leader, during the first night. Somebody must have missed a lesson in writing slasher movies.

Aside from Ginny and the guy in the wheelchair there are a few other notable characters. There’s Ted (Stu Charno) who is the prankster and now has a weird Youtube channel. There is a couple named Mark and Sandra who sneak onto the Camp Crystal Lake grounds, but most notably there is Terry (Kirsten Baker). Terry is the designated hot girl of the bunch. She’s the one that decides to go skinny dipping in the middle of the night while looking for her dog. She also does full nudity, which is something you don’t see often. Usually it’s just boobs. Her introduction to the audience is quite in your face: A 10-20 second scene in which we follow her butt in a couple of shorts that don’t even cover it fully. This must have been a scene rewound by teenage boys on their VHS copy many, many times. That and the skinny dipping scene. 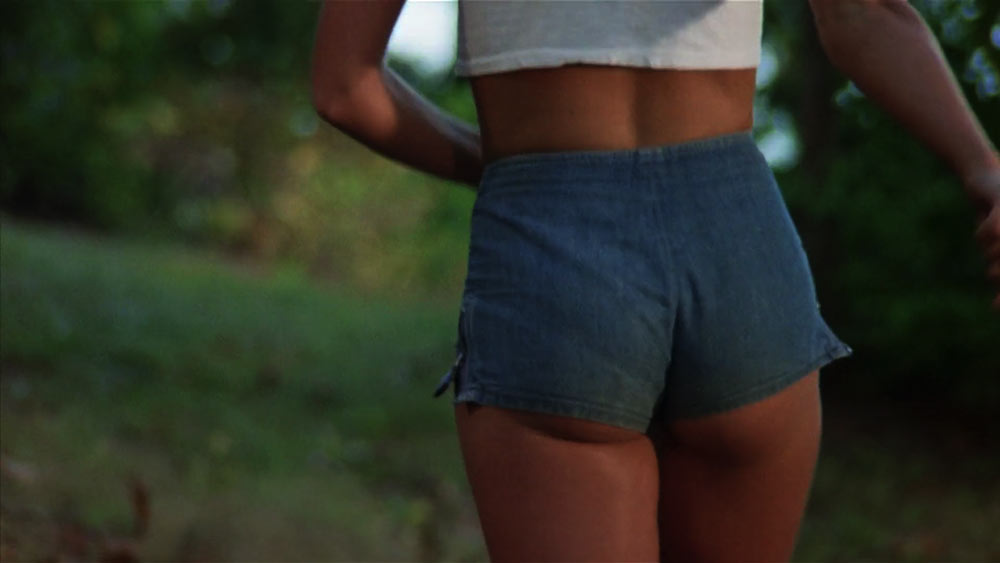 For the first time Jason is actually the killer. It’s a different Jason when comparing him to later movies. This Jason is a hillbilly who not only has a burlap sack over his head but also runs and sets traps. He also has a shack deep in the woods with a toilet and a shrine for his mother. Friday the 13th Part 2 is the only movie that actually treats Jason as real human. Especially during a psychological showdown between him and Ginny. He’s also afraid when Amy comes at him with a chainsaw and he at one point receives a kick in the nuts. The Jason in this movie is a boy who managed to survive in the woods for more than 20 years without ever being seen. Quite the survivalist. Bear Grylls would be proud of him.

Friday the 13th Part 2 is one of the better installments in the Friday The 13th franchise. There are a couple of inventive death scenes, some memorable roles and even a nice change of pace by having part of the second act take place away from camp. Ginny is one of the better final girls in slasher history and both Kirsten Baker as well as Marta Kober were really nice on the eyes.

I do have some problems with the movie. On a technical level there are multiple POV shots where the people supposedly being stalked look directly at the camera. This way they make eye contact with the audience, or as we perceive it, with the killer. The actors don’t respond to the camera as if there is no one there. In slasher movies the POV shot is reserved for what the killer sees. So if the actor looks at the camera, then he or she should be face to face with the killer. 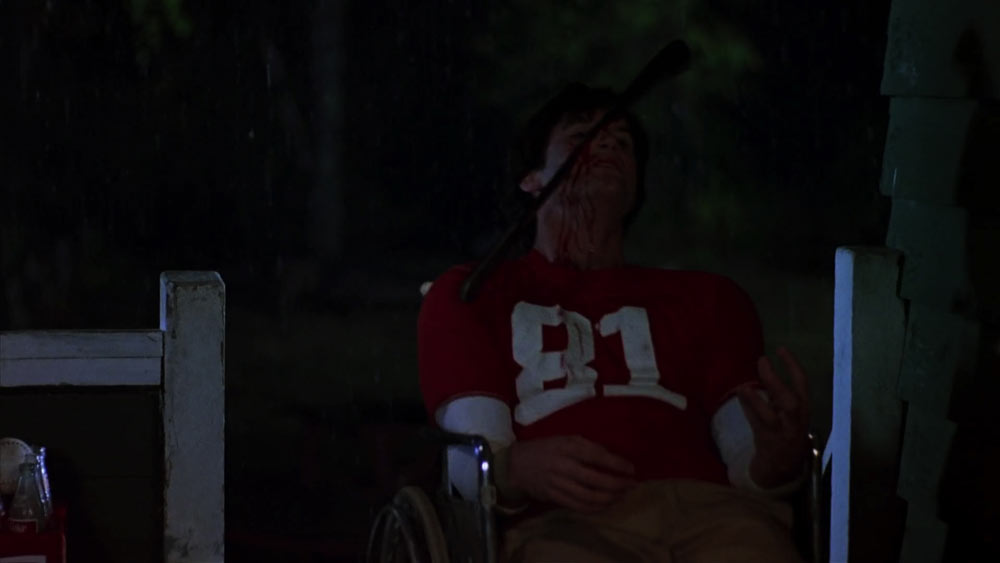 Only a couple of the characters are fleshed out. The wheelchair guy gets to tell his story and somehow has the affection of a hot girl who is really into him. Terry’s only character trait is that she has a dog named Muffin. It’s not surprising these kids are hardly fleshed out. The movie has a brisk running time of 87 minutes including end credits. When you subtract the opening scene and both the title and end credits you’re left with about an hour of a movie.

Though the hardly fleshed out characters aren’t really a big problem. These kids have only two reasons to exist in the movie. To do teenager stuff like having sex, drinking and smoking pot, and to die. The problem is most of the death scenes are rather tame. Some of the murders even happen off screen. It’s like listening to a censored version of a song.

The ending is also rather confusing and a weak way to imitate the ending of the previous movie. It’s nice to see Ginny’s safe, but it leaves us with many questions like “Where’s Paul?” and “What happened to Jason?”. It kind of made it seem that a part, if not all of it, was a dream. Or a nightmare in this case, but that is a whole different franchise.