Here I am again. Delivering a review about yet another Friday the 13th movie. Even though the previous movie is called “Friday the 13th: The Final Chapter“, another movie came out just a mere year later. Apparently subtitles don’t mean much any more since we now have “Friday the 13th: A New Beginning”. You just can’t keep a good horror icon down. Not when he is still making a killing at the box-office.

This is the fifth movie in the never ending franchise revolving around hockey masked killer Jason Voorhees. A guy who by now has been hung by the neck, got an ax to the face and slid with said face down his own machete. And yet, like I said, here we are once again.

Friday the 13th: A New Beginning doesn’t waste time with a recap. Something parts 2, 3 and 4 did. To me this is a positive note. Most people watching these movies nowadays are watching them in a short time span, if not doing a marathon. No need to sit through 10 minutes of material from previous movies. When you’re going to see a part 5 of a movie series, you can assume the audience has seen the previous movies. 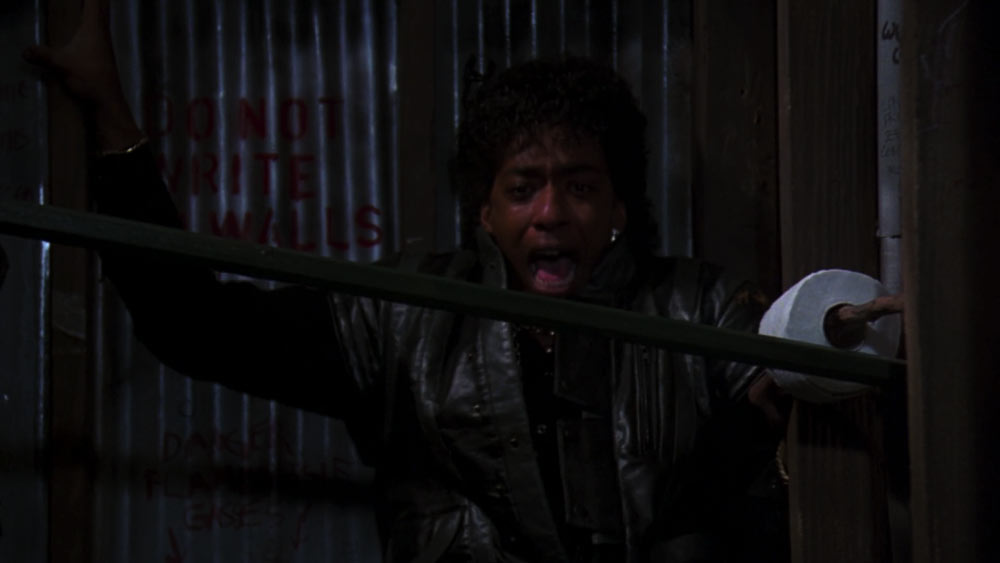 If you can recall the previous movie ended with Corey Feldman going ape shit on the dead body of Jason. A creepy stare at the camera hinted at him going full Michael Meyers giving the movie studio a way to squeeze some more money out of their goose with the golden eggs. The movie opens with a cameo by Feldman as Tommy Jarvis as he witnesses a couple of guys digging up the corpse of Jason, only to find out he is still alive. This turns out to be just a bad dream by an older Tommy as he arrives at a halfway house.

The residents of the halfway house are mostly teens with problems and a few adults/supervisors. What they’re all there for I can’t tell you, because these characters are not given something even remotely resembling a personality. Just when Tommy arrives one of the residents flips out over another resident and chops him into pieces with an ax. At the same time Tommy has serious P.T.S.D. and constant flashbacks to Jason. Soon after the incident and Tommy’s arrival people are being murdered left and right. Is Jason back from the dead or is it Tommy who is responsible? Who knows? Who cares? 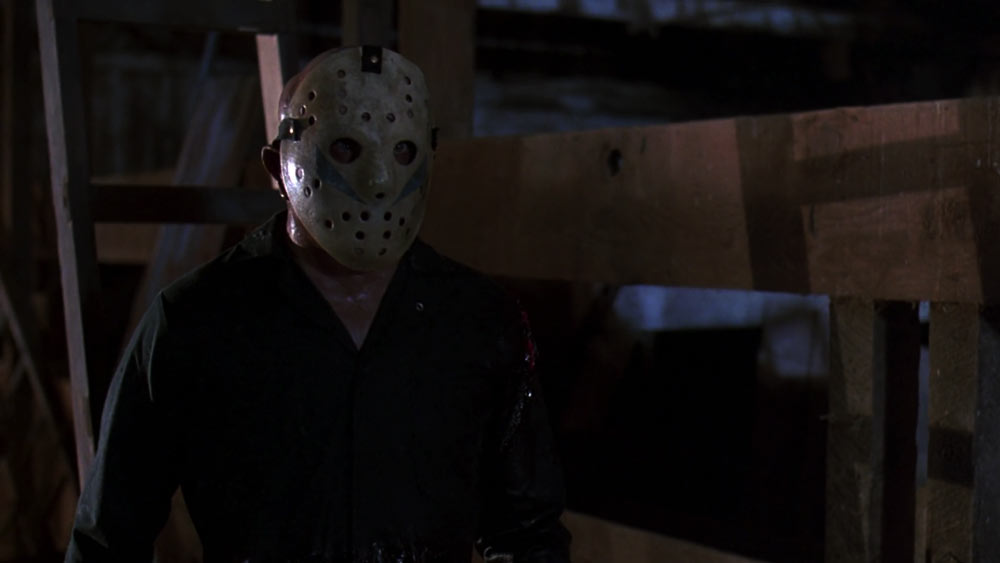 If you haven’t seen the movie and you don’t wat to be spoiled I suggest you to stop reading.

A lot of people have been hating over the years on this movie due to the fact that Jason isn’t the killer. Just like the first movie, it toys with the idea that Jason is the killer but in the end it turns out it was someone else. The first movie had Mrs Voorhees as the killer. This time it’s ambulance driver Roy. Who is Roy you might wonder? Well it turns out he was the father of the kid that got killed in the beginning of the movie. Roy basically goes the same route Mrs Voorhees went: avenging the death of a son. While she stuck to camp counselors trying to reopen Camp Crystal Lake, Roy goes all out on everybody who has some screen time. Just like Jason did.

I personally don’t really care that Jason isn’t the killer. It’s actually kind of praiseworthy that they didn’t go for the easy way out and have Jason come back from the dead. They will still do that in the next sequel, but for now it’s something I admire. Jason was a guy wearing a hockey mask who in three movies walked around the woods and killed everyone on his path. Friday the 13th: A New Beginning has a guy wearing an almost identical hockey mask walking through the woods and killing people. Whether his name is Jason, Roy or even Tommy; I don’t really care and neither should you. 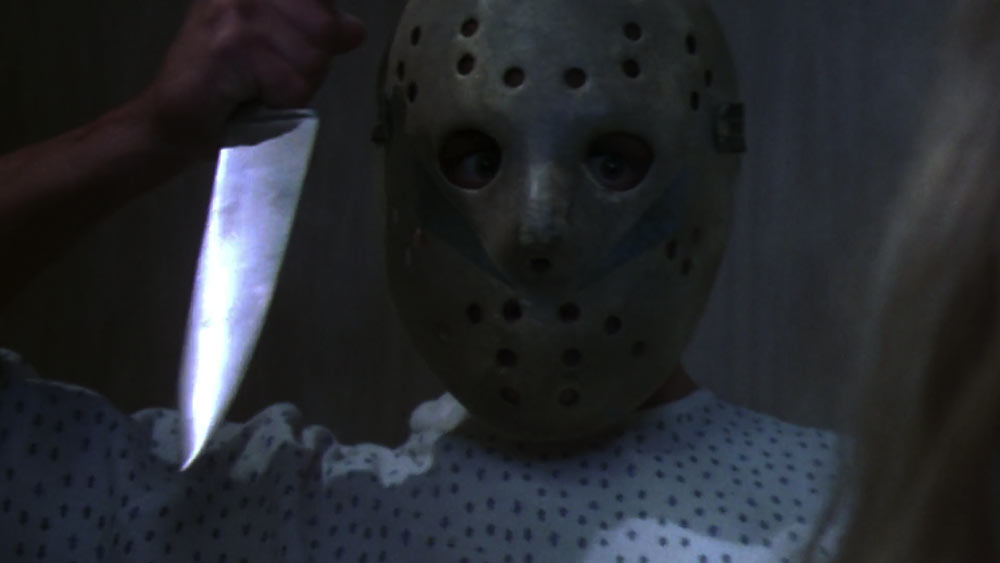 Even though I don’t share the general opinion about the identity of the killer, I do think this is the weakest movie in the franchise up until now. Once again the body count is higher than any of the previous movies. Since the running time is around 90 minutes that doesn’t leave much room for other elements like character development. This series isn’t known for its carefully crafted three dimensional characters, but Friday the 13th: A New Beginning really takes it to the bare minimum in terms of character development.

Take the halfway house residents for instance: There’s a girl who does the robot dance all the time, a girl who has big boobs, a guy who has sex with the big boobed girl, there’s a girl who friend-zones a guy and who has small boobs, there’s the stuttering friend-zoned guy and a young black kid named Reggie who is there because his grandpa is the cook. There are also two counselors of which the female, named Pam, is the final girl. Aside from Reggie and Pam I can’t even remember their names. And these are the people we should at least care a little bit about. Then there’s a whole staple of throwaway characters only in here to increase of the body count. They meet their demise within mere minutes after their introduction. 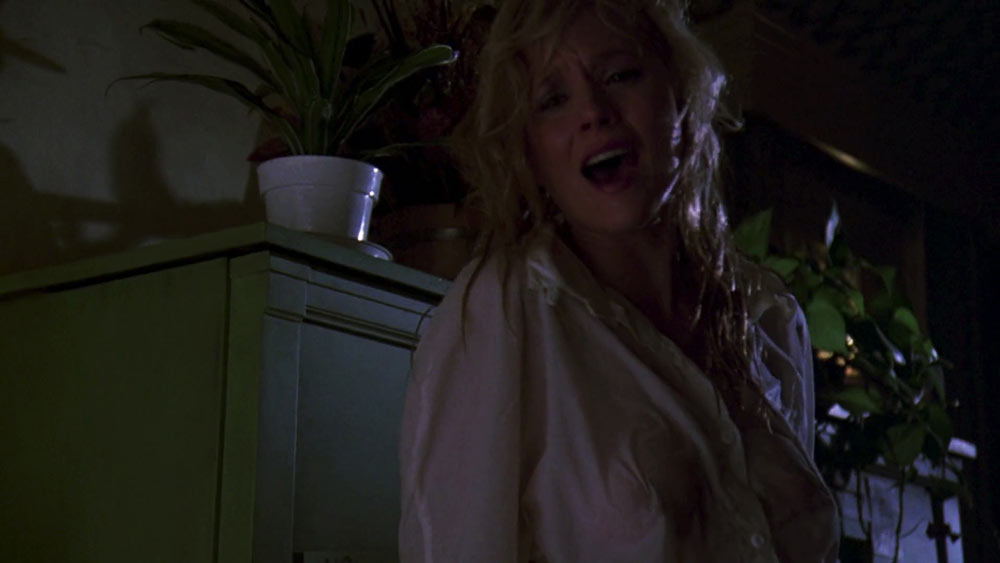 This is what makes Friday the 13th: A New Beginning the weakest entry of this series yet. It’s just kill after kill after kill. These kills are heavily cut in order to obtain an R-rating. So there’s not even much fun in these scenes in terms of gore or special effects. Director Danny Steinmann seems incapable of creating some suspense. There are no long stalking scenes, no lengthy POV shots. It’s all quite bland and never really scary or suspenseful.

What’s even more fun is that the final girl (Melanie Kinnaman) doesn’t wear a bra in her scenes. So when she’s being chased through the rain, her nipples can be seen through her blouse. From what I can tell she has a nice set of boobs. You might think I’m obsessing over the mammary qualities of the actresses in this movie, but that’s all this movie has to offer: boobs and blood.

It’s the sleaziest of all the Friday the 13th movies, but that does give this movie some redeemable quality.

Friday the 13th: A New Beginning is definitely one of the lesser entries in the franchise. On the other hand it’s not as bad as people make it out to be. Just because the guy behind the mask isn’t called Jason Voorhees should be no reason to dislike this movie. There’s plenty of other stuff that will justify your opinion. The lack of boobs certainly isn’t one of them.

Friday the 13th: A New Beginning