It was inevitable I guess. After putting Jason in Space and vaporizing him in the atmosphere of Earth 2 in Jason X there really was no more place he could go. And since the movie the original Friday The 13th ripped off, the mother of all slashers; “Halloween”, had been given a remake treatment it was only logical for Friday The 13th to do the same once more. Now I’ve always liked the Friday series more than the Halloween movies for some reason. The Friday movies always seem to be more fun to watch to me. Since I liked the Halloween remake (yeah I know, Blasphemy) I was really curious how the Friday Remake would turn out.

Well it turns out not to be a remake in the strict meaning of the term. Halloween took the original script, original characters and added some back story for Michael Myers. Friday The 13th only uses the foundation and pieces of the first couple of movies. During the opening credits we get a sequence in which a camp counselor decapitates Jason’s mother while he is watching. This is as you might know the original ending of the original part 1. Then we get a 20 minute long prologue in which a couple of unhappy campers meet the man in the burlap sack and some of them stumble upon his cabin in the woods and a shrine for his mother, including the severed head. This is of course all taken from part 2. Then we get what is basically a remake of part 3 where the future victims are staying in a summer cabin and Jason gets his trademark hockey mask. There are references throughout the movie to the first 4 original movies and it’s fun to spot them.

After 11 movies it’s no surprise what to expect when watching a movie like this and this movie delivers the goods. Like almost all remakes this movie looks so good it really makes the original movies look even more cheap than they already did. The movie incorporates the same grunge look that is so evident the last couple of years in horror. Saw, The Texas Chainsaw Massacre remake, The Halloween remake and other movies really look slick. The last couple of years even low budget movies can now have the look of a big budget film. As someone who is really fond of graphics I find this a welcome progress. 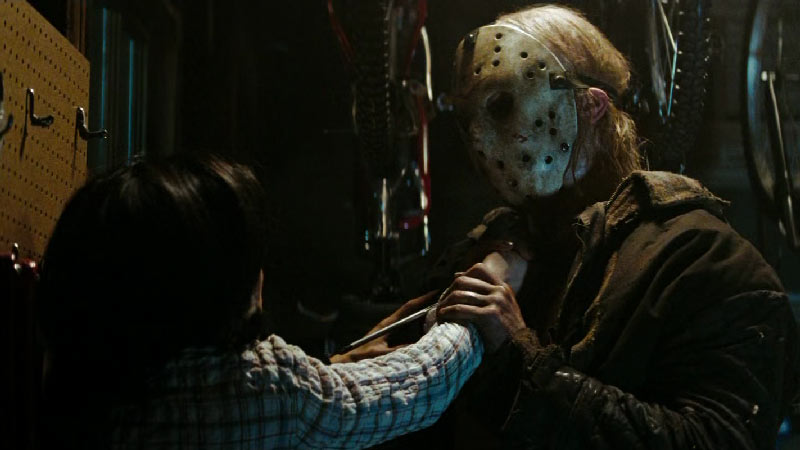 Friday the 13th fans will not be disappointed with this film. It uses the foundation laid out in the 80’s and expands or plays with them. Although continuity freaks will have problems with it because it’s a loose remake and thus messes up the established time-line. I suggest you see this movie as a new beginning, not something that has anything to do with the original series.
For the first time we see Jason actually being there when his mother gets decapitated and for once Camp Crystal lake is not being reopened after the murders. Campers out there are either looking for some rumored Pot-plantation or going to spend some time in a summer cabin. Jason himself is more developed now than he was in previous movies. As a human instead of a zombie he walks, runs and acts like a man who survives in the woods. He has transformed the abandoned Crystal Lake to his home where he dumps bodies. He himself has carved him an underground lair in which he resides and where he has built his altar with his mothers head. He even keeps a potential victim captured because she reminds him of his mother.
In a nod to part 1 Jason also proves to be an excellent marksman, just like his mother. He really is more human and seems to use his brains more than ever now. He even sets traps and has a warning system for intruders in the area. Yes, he is still a mongoloid but not a complete retard who just happens to kill anything on site.

Jason Voorhees; he’s starting with the man in the mirror

I had a bit of a problem with that fact that Jason manages to live in the woods fairly unnoticed, even though some local folk refer to him a some sort of a legend. Camp Crystal Lake is abandoned and everybody just lets it go to waste? Okay, but nobody actually notices people going missing, blood traces in the woods and someone creating a whole underground lair? Well, since Joseph Fritzl did create his lair ina family house where he kept his own daughter and her children prisoner and not even the people living in his thouse noticed I guess my complaints aren’t that solid. 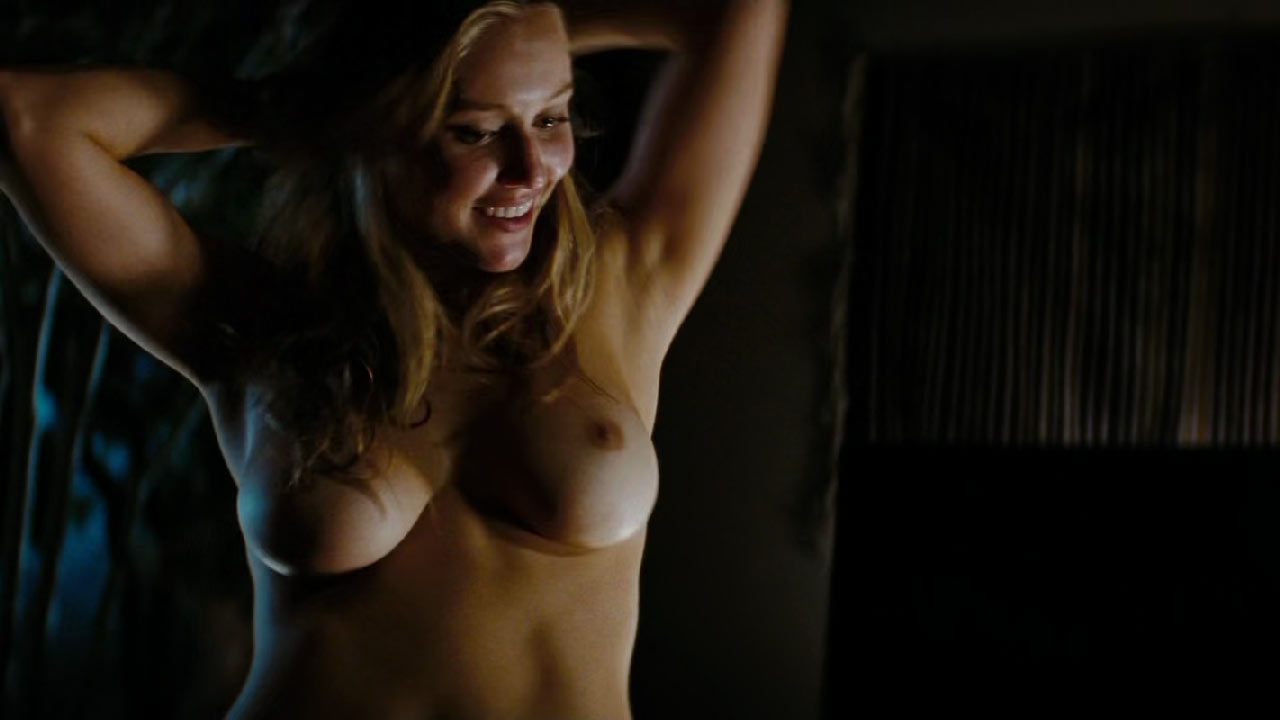 But people are old fashioned ignorant once again. Five people go missing in the first reel, and when the brother of one of them pops up asking questions about his missing sister, a nod to part 4, the cops just respond with “Oh, well, maybe she doesn’t want to be found”.
Ignorance is a part of the slasher genre I guess, as is getting killed after skinny dipping, having sex and/or smoking weed. Well as always these people do not live long in a movie like this. There is some playing with the stereotypes here, and this is where a bit of selfreferentialism comes in, but it’s just on two small throw away lines. The rest of the movie it is a serious and brutal as can be. The humor so evident in Jason X and Jason Lives is non-existent here. The kills are without mercy and without joking around. Aided by CGI there are some cool graphic kills mostly with the featuring a machete or some other tool from the shed.

He should’ve watched where he was going

Nudity has always been a big factor in these kinds of movies and I’ve heard there was really a lot of it. That’s a bit over exaggerated. There’s a fair amount of gratuitous nudity in it and one sex-scene is quite graphic and goes on for a long period but the amount of nudity is fairly standard for a movie like this. You have a play on the standard skinny dipping scene; skinny jet skiing. 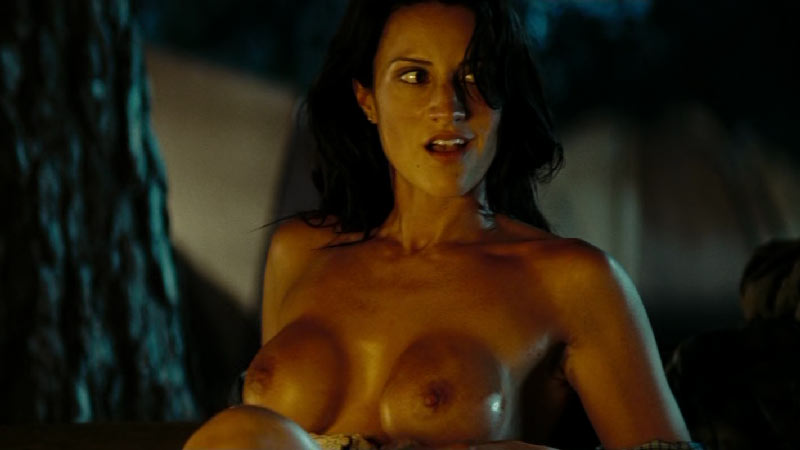 There is as always some fornicating going on. People complaining are probably not that familiar with the genre. What I didn’t like was a scene where a girl (America Olivo) plays with her tits at a campfire and she just so happens to have massage oil with her (Camping rule #1: don’t go into the woods without massage oil) and starts oiling up her breasts. Too bad she has one of those sets of stick-on-tits; You know, girls who are pretty flat-chested and go to the surgeon for a set of implants and go from a small A-cup to a D-cup and it looks just like those things were glued to their chest. I hate that. Like I said in my review of Driven To Kill: get some actress with real breasts to do scenes like that. It’s not like the girls used with stick-on-tits are thespians. They had the same thing in the opening scene of Freddy vs. Jason. Some girl showing of her silicon implants. Why show something off that not only looks fake but other girls get for free from mother nature? It’s like buying a Trabant for the price of a Lamborghini and showing them off to everybody. Royal sadness.

So basically this movie supplies the gorehounds and the horndogs with a shot. Woof!

I like this re-envisioning of the Friday The 13th movies. It doesn’t break any really new ground but it does update the character of Jason Voorhees and his surroundings for the next decade. The movie looks very good although on occasion it was a bit too dark. I’m really looking forward to the sequel to this movie and I’m wondering if they’re bringing back Tommy Jarvis.