The fact that this movie is simply titled Freddy’s Dead: The Final Nightmare tells you everything about how much of a household name Freddy Krueger was. By 1991 the once scary child killer Fred Krueger was now everybody’s favorite stand-up comedian. Well not everyone, since the box-office returns began to decline after part 4. So New Line Cinema opted to give Freddy one last movie in which the audience was promised he was going to be killed off for good this time, and to give it some extra spice they filmed the finale in 3D.

The movie skips resurrection sequences which were in the majority of previous sequels and throws us 10 years into the future after the events of The Dream Child. Though Alice and her family are nowhere to be found it’s safe to assume Freddy did get the best of them as Springwood is a town without any children left, save for one, and full of adults who have gone looney due to all the child deaths. At one point one of the characters calls it “Twin Peaks” and it’s quite unrealistic that there’s an entire town with nut job grown ups who are all walking around talking to imaginary kids.
There’s only one kid who still lives and he eventually escapes Springwood and finds a shelter for troubled kids in another town. He’s lost his memory, but still I was wondering what he was still doing in Springwood all this time. All the adults are wackos and all his fellow teens are dead. What did this guy do all day before the events shown in the movie?

The movie revolves mostly around Dr. Maggie Burroughs and survivor John Doe going back to Springwood with a couple of teens from the shelter tagging along. Two out of three of them get slaughtered by Freddy, big surprise there, while John Doe and Maggie find out more about Freddy’s past and eventually come to the conclusion Maggie is Freddy’s daughter. With the aid of colleague Doc they find out Freddy gains his powers from Dream Demons and Maggie must pull him out of her dreams into the real world so she can kill him once and for all. The same way Nancy did in part 1; like that helped. 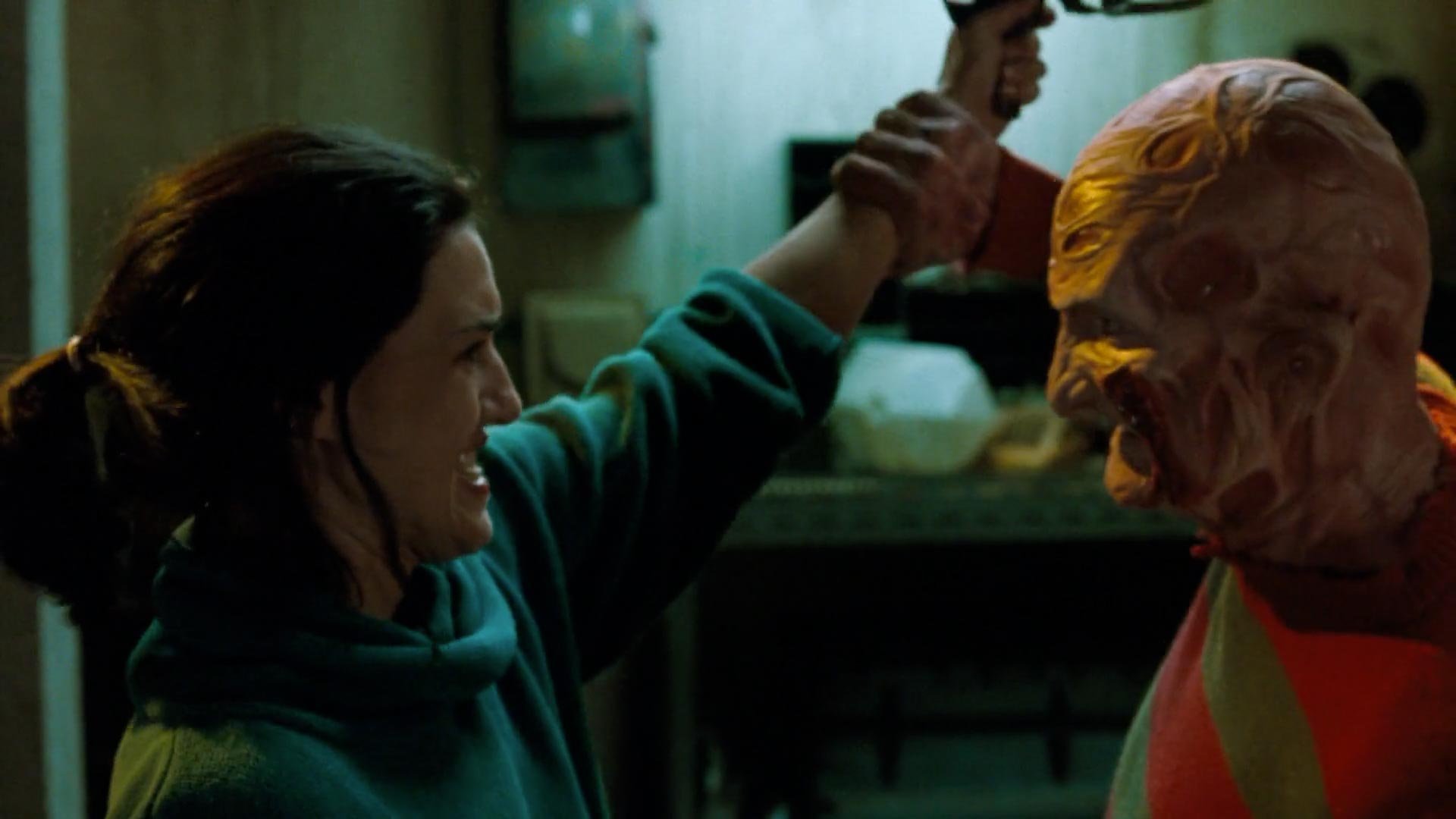 This movie is a sad send-off of one of cinema’s greatest slasher icons. Freddy might not have a really high kill number compared to Jason or Michael, but his kills were always more inventive due to the dream world they took place in. The actual kill was just mere icing on the cake, him taunting his prey was were the fun was. Too bad they writers eventually took it too far and made him less scary with every installment. In every scene he’s constantly laughing maniacally and playing sick tricks filled with dark humor on his prey, but you can hardly take him serious any more. His facial expressions when he’s scratching his glove across a school board or when he’s playing a video game are hardly that of a homicidal maniac. This is a character whose first on screen words were “This… is God” but now has dialogue like “Boing, boing, boing”.

Fans get a glimpse in the past of Fred Krueger, his life as a young boy and teenager as well as a scene in which we actually see the parents murdering him. It doesn’t add much to the character. Most of the times, the least we know about a character, the more scary he is.

Freddy’s Dead is a movie that actually delivers what the title promises us. Apparently they now actually kill him for real, and it was the final Nightmare. New Nightmare isn’t a part of the continuing story line and Freddy vs Jason is debatable as whether being a part of the Nightmare movies as well as the Friday movies. It continues both franchises’ final movies, but it’s never a either real Nightmare or Friday movie due to the pairing of both horror icons.

What it doesn’t live up to was the tagline: They saved the best for last. Together with the second movie Freddy’s Dead is one of the weakest movies in the series. As Freddy should have said in the movie after the video game death, but didn’t: Game Over.