Foxy Brown is Pam Grier’s 2nd movie in a starring role after the success of Coffy. It’s written and directed by Jack Hill. The same guy who was responsible for Coffy. Foxy Brown was originally intended to be a sequel to Coffy so it shouldn’t come as a surprise that the plot is very similar. While I do find Coffy to be a better movie, Foxy Brown has a more impressive legacy. Quentin Tarantino’s Jackie Brown has a direct title reference and the movie has also served as the inspiration of the name-choice of female rapper Foxy Brown. So let’s take this blaxploitation movie to the hot spot!

Foxy Brown is basically a more serious version of Coffy; less exploitive and grittier. The plot is fairly the same. In Coffy our lead went after the people responsible for hospitalizing her cop-buddy. In Foxy Brown she goes after the people responsible for killing her cop-boyfriend Michael. Because of the similarities this movie felt a lot like a sequel. I have the idea that they did some last minute rewriting of the script which included changing some names. 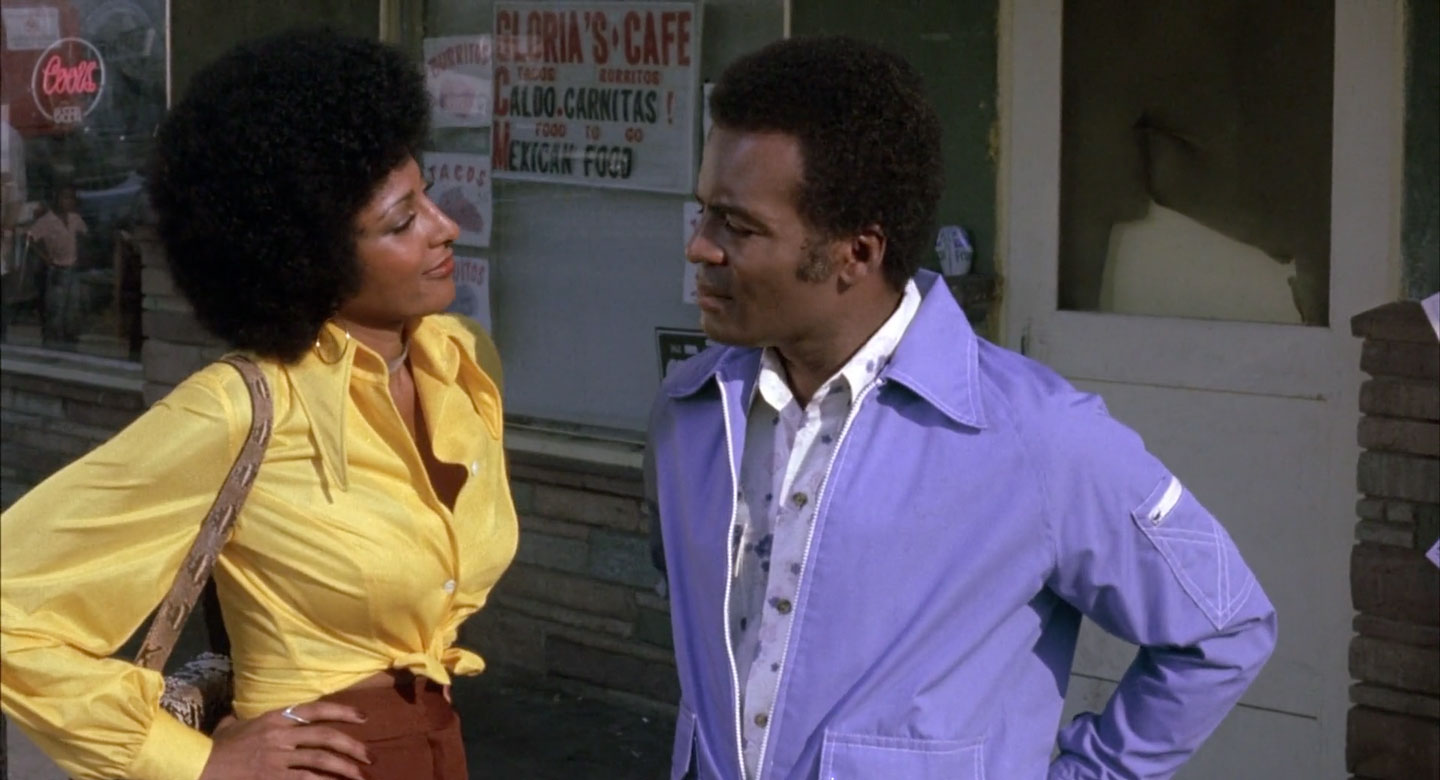 When we meet Foxy’s boyfriend Michael he has just received plastic surgery as part of being in the witness protection program. Too bad Foxy’s brother Link (Antonio Fargas) is deeply in debt with the people who have a score to settle with this cop. So he rats him out resulting in Michael getting murdered. You know what happens next. Pam Grier goes out for some vigilantism… again.

Luckily the crime bosses responsible for Michael’s death are not just into drugs. They also happen to be into prostitution which once again gives Pam an ideal way to get inside of the organization. Seducing every male character with her curvy physique again.

As you might have noticed the word “again” is used a lot. So from here I’ll try to focus on the things that differ. 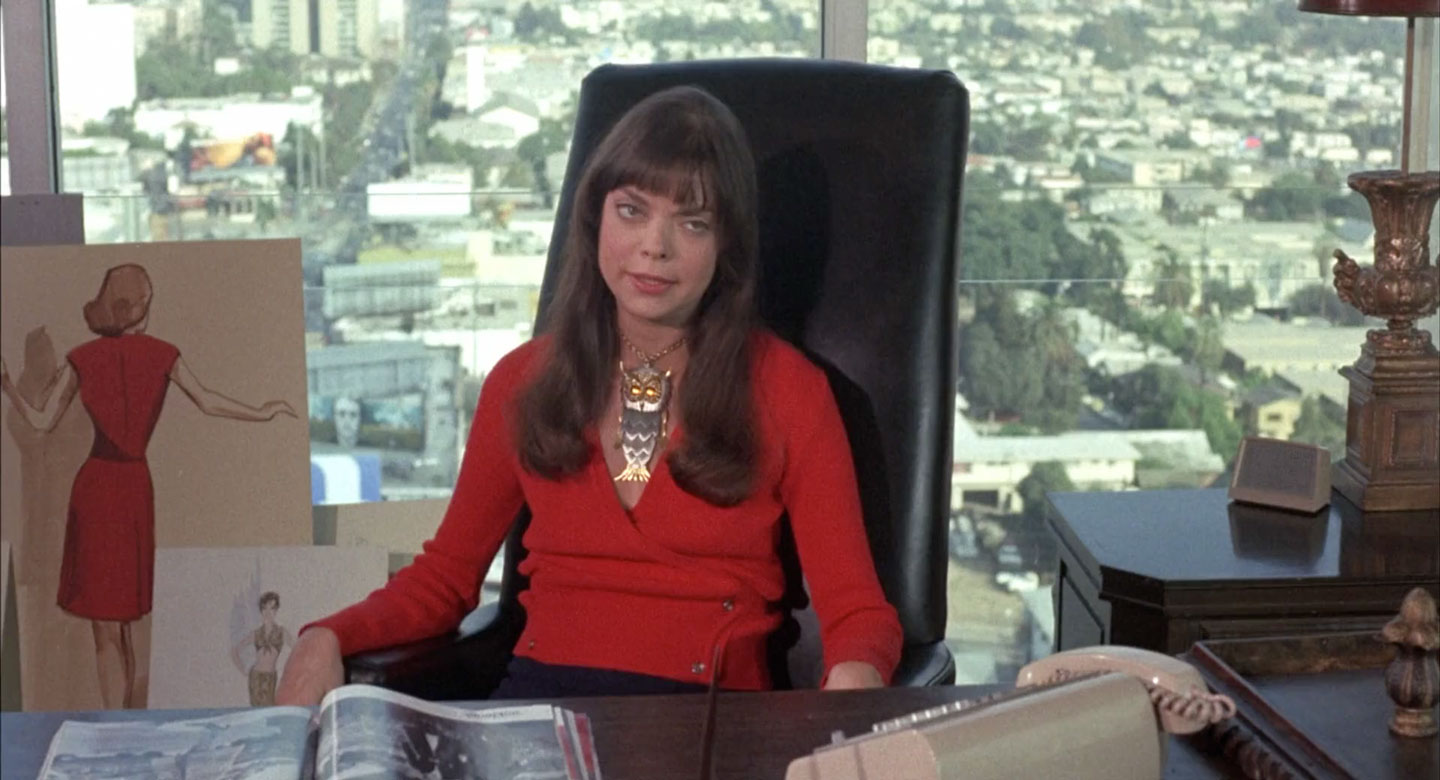 This movie is more serious and less over the top. This is also it’s greatest weakness. It’s less fun this time. This also means the whole exploitation level is down a notch. There’s less gratuitous nudity and even though there is violence, it never reaches the levels of a man being dragged to his death behind a car. We do get a man getting his eye ripped out by a couple of clothing-hangers. I have to give credit to that though. 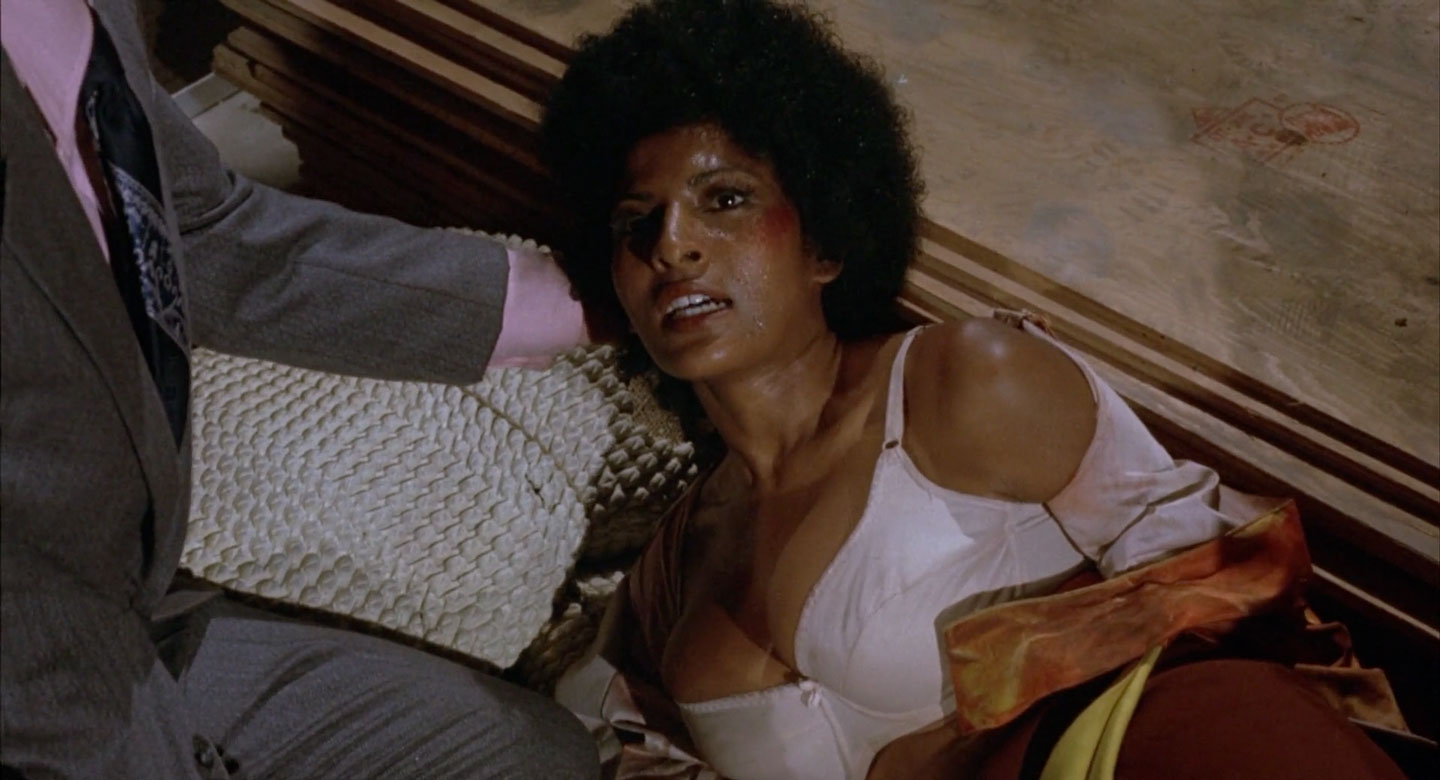 People expecting Pam to show at least as much nudity as in Coffy will be disappointed. Moments in the movie that could show off her goods are shockingly subdued. Scenes like these mostly play in the shadows, behind curtains, in the background etc. Even during a sex-scene her boobs a nicely covered by the hands of her partner. She’s teasing us though. Throughout the movie as 80% of her outfits are tailor-made to emphasize her breasts.

There is one notable moment containing nudity. It is a long scene in which she’s tied to a bed topless and has to get a razor from the nightstand with her mouth. But in this scene she’s beaten, tied down and shot up with heroin. So it’s kind of seedy and one of the scenes that clearly shows of the exploitation background of writer/director Hill. It’s quite an impressive scene though in terms of physical acting. 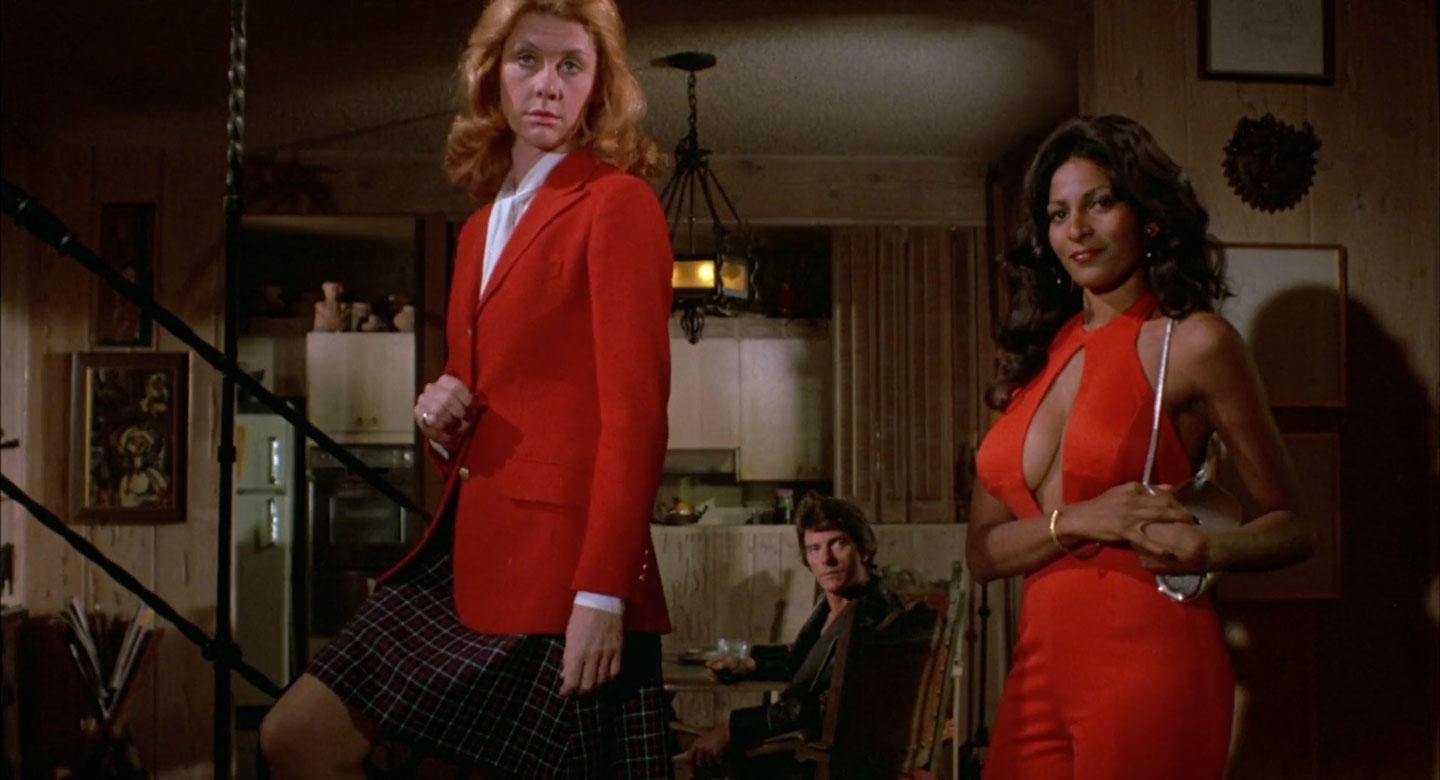 Now back to those outfits. During the credits sequence, which resemble a cheap James Bond knock-off, there is someone credited with designing and creating the costumes of Pam Grier. She took her job seriously. There are almost no two scenes in which she wears the same outfit twice, unless it’s for continuation. In one scene she is auditioning in a yellow dress for a job as a prostitute. The next scene she is at the house of the criminals getting ready for her first job wearing a stunning red dress. Once she’s in the house she has to change into her work outfit: a blue dress. That’s three dresses in less than five minutes and it ain’t even a montage from a romantic comedy or something like that. 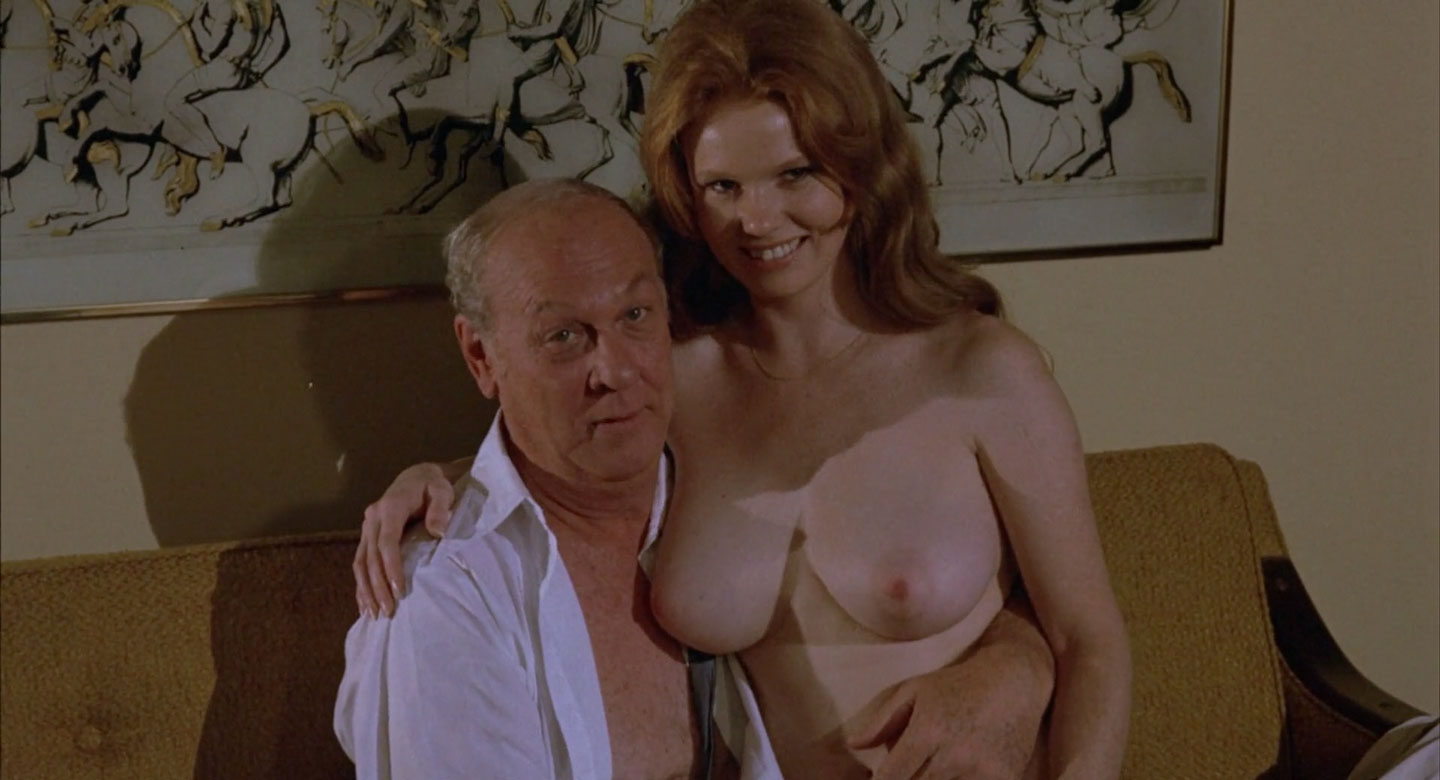 Pam Grier does a better acting job here than in Coffy. Other memorable characters the cast include Antonio Vargas as her untrustworthy junkie brother and Sid Haig, who has a brief role a pilot. As in Coffy, he falls for Pam Grier’s charms again.

Foxy Brown is definitely worth a look and in the end only a few steps behind Coffy. It is still hard to take your eyes of Pam and carries the movie without any trouble. Some of the effects are a bit dated and some action scenes have been done better in The A-Team but it still holds up reasonably well considering it was made in 1974.