Fire Down Below is a movie I missed upon it’s release. It wasn’t until the DVD became popular and Warner Brothers was releasing all of its action movies on the so-called Best Buy label. All of Steven Seagal’s movies fell under this label and got a release. I knew all of them but one: Fire Down Below. The reason I missed this one was that at the time of its release  Seagal’s prime was over. It went straight to video over here and without the internet you just need to stumble upon a film like this in the video-store. That just didn’t happen I guess. But thanks to DVD I can catch up on movies I missed out on.

Seagal is Jack Taggert, an EPA agent who goes undercover posing as a carpenter in the small town of Jackson, Kentucky.  Government officials that were investigating pollution and the dumping of toxic waste in the area have gone missing. So naturally Taggert volunteers to go there. His way of investigating does not only consist of examining water samples and talking to townsfolk undercover, but also beating the living shit out of whoever stands in his way. A lot of people tend to stand in his way. 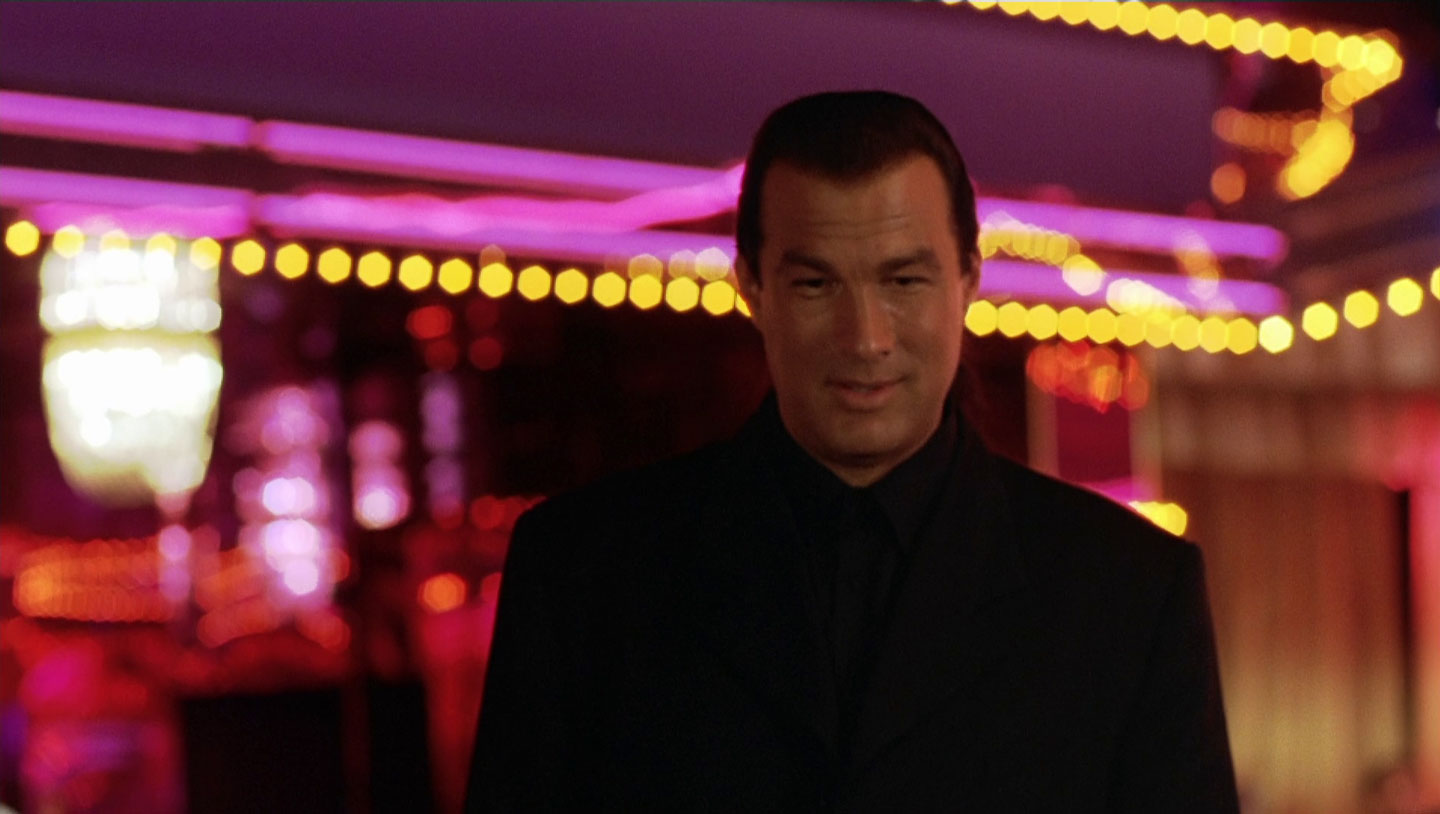 But that’s to be expected, because this is a Steven Seagal movie and we love ’em for it. Even the marketing-department of Warner Brothers knows that because this is what the DVD cover says on the back:

When thugs try to take him out of the action, Taggert takes on another line of work. He’s in the butt-kicking business. Business is good.

I wonder how many people actually read the backside of these covers because they always sound so corny. The cover of Under Siege 2, the Die Hard on a train film, closes it’s synopsis of the film with “All aboard!”. Somewhere out there, there is someone typing this shit down and laughing his ass of because he actually gets paid for it. Lucky him.

But you can’t judge a movie by its poster, and so shouldn’t I. 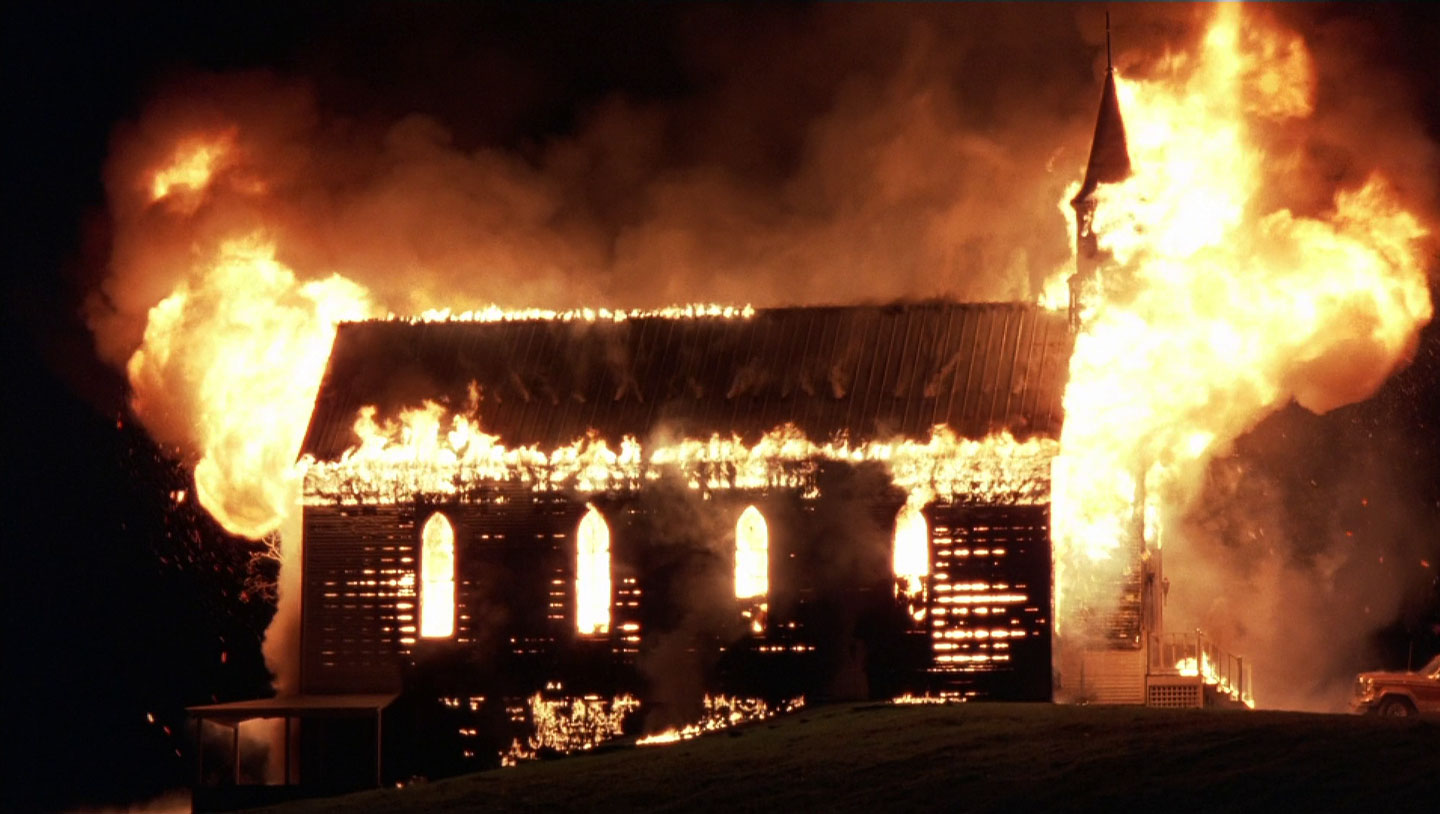 The roof is on fire, we don’t need no water, let the motherfucker burn!

Fire Down Below feels somewhat smaller than its predecessors. As if it is a throwback to Seagal movies before Under Siege. The two big action pieces are a truck chase and a church burning down. But on the levels of story telling it’s less elaborate then solving a serial killer case. The setting is a small town and the bad guys aren’t trained mercenaries or the mob but rather a couple of local hillbilly strongmen. The kind that go to their boss after being beaten up and saying: “But boss, he did all of that weird karate and stuff”.

Fire Down Below would be the last movie to star Seagal in his usual way for the next couple of years. After this Seagal starred as a doctor(!) in The Patriot which went straight to video in the US. That means it’s release here in Europe was even more obscure and went by unnoticed. It wasn’t until 2001 we would get the last good Seagal movie Exit Wounds, which was labeled as a comeback. Too bad it was a short-lived one as the DTV-era was lurking just around the corner. So this movie closes the 90s one Seagal movie per year period.

I like Fire Down Below. Mostly because I watched the entire collection of Straight to video movies Seagal made since 2002. It isn’t as good as both Under Siege movies. It also hasn’t got the high tempo of his early work like Hard To Kill and Out For Justice. But he still performs wide angle action sequences instead of close up as he now always does. He runs and he actually seems to give a damn about this movie and tries to act his way trough it. It doesn’t feel like it’s just a quick paycheck for him. 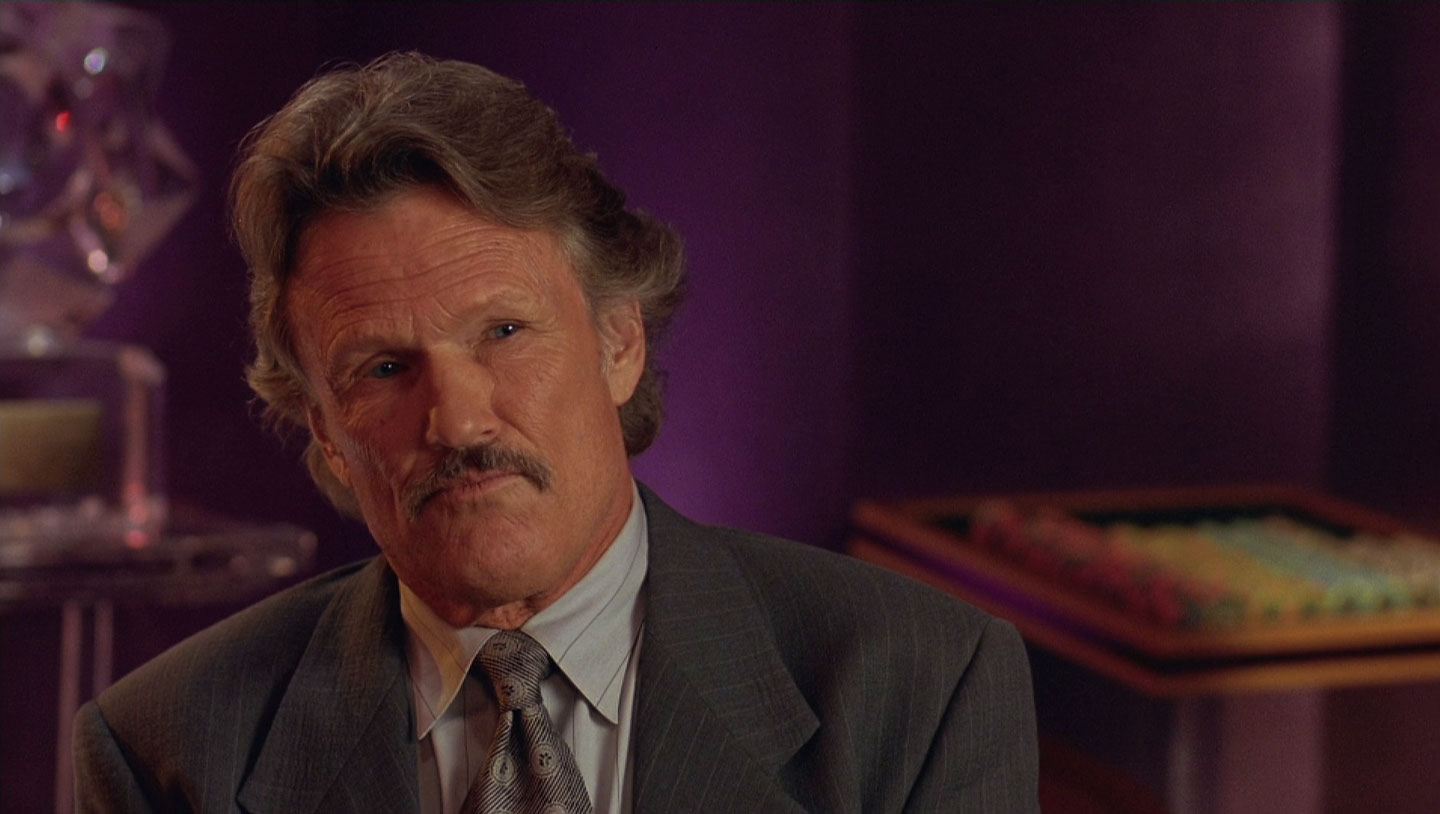 In terms of detail: I loved the running of that one guy getting punched on his nose over and over again. It’s these little things you want from Seagal, and we only seem to get them when he really cares about a project. He cares about this one.

Being about corporations polluting the environment it’s not a surprise that this film draws comparisons to On Deadly Ground. That movie was Seagal’s first box-office failure. It’s also considered to be his worst movie for a long time. It now looks like Citizen Kane when comparing it to movies like Attack Force. Fire Down Below is better because it lacks all the spiritual Eskimo stuff and heavy preaching. I’m sorry folks, no Nanook, the man-bear this time! 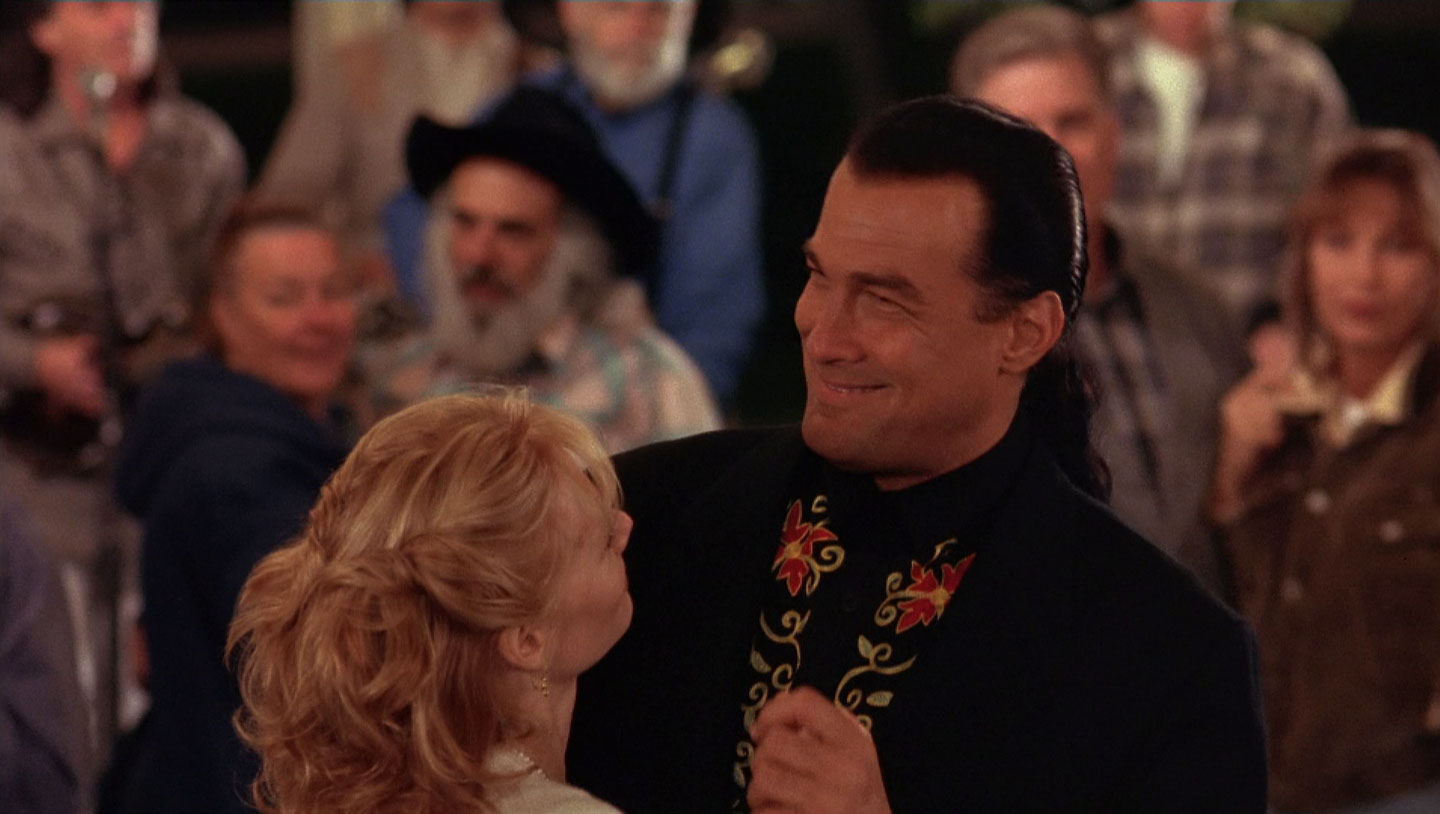 Seagal movies always have some names in the cast that draw attention. Harry Dean Stanton is a local inbred who seems have a chromosome too much. Marg Helgenberger (CSI) is playing Seagal’s love interest. To be honest, in terms of beauty Marg is a step back in terms of love-interest or at least female co-star. Especially when you consider she was preceded by women like Pam Grier, Sharon Stone, Kelly LeBrock, Erika Eleniak and Katherine Heigl. I’m not saying she’s ugly, but she isn’t Playboy-material either. She is convincing as a middle aged woman who would be living in a small town like that.

Nowadays Seagal’s love interests in his movies are in their mid-twenties. Seeing as he is in his sixties, those scenes always tend to feel awkward.

It’s easy to see how people will describe Fire Down Below as a simple action movie. They aren’t seeing that it’s actually a movie about disturbed relationships. Orin Sr (Kristofferson) puts his son, who’s handling the town, down every chance he gets. Ironically it’s his son who will be responsible for his downfall. Sarah (Helgenberger) is shunned by the town and has an unhealthy relationship with her brother. This is redneck-country y’all. On a less personal level: the corrupt police don’t “protect and serve”. Much of the townsfolk also have a thing against outsiders. The “we don’t take kindly to your type” people. The entire town should go in group therapy. 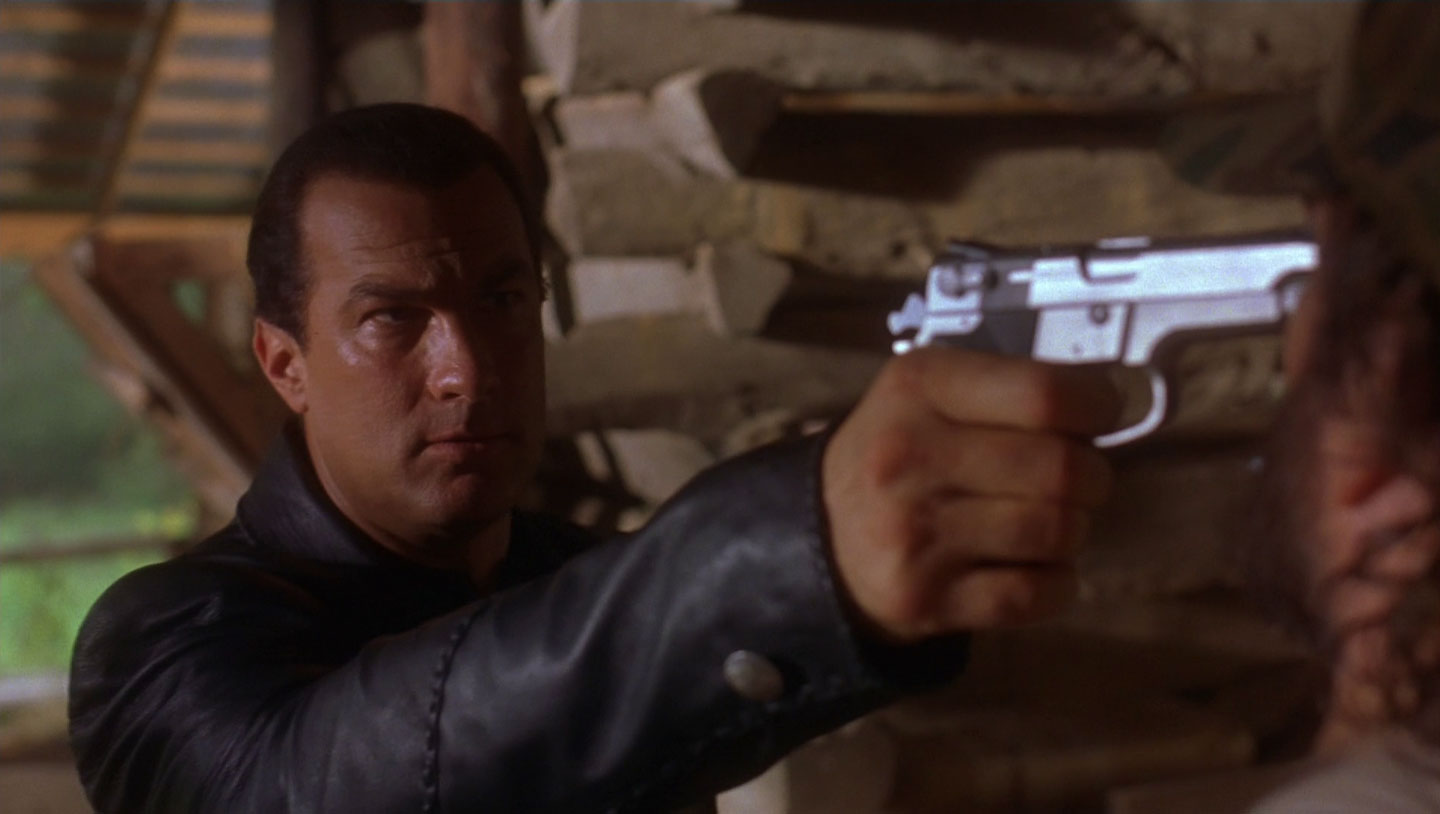 I must mention the cinematography. I think the movie is beautifully shot. Not only does the local scenery looks stunning but also the night-scenes where the church is burning or the town-festival are beautifully lit. It really grabbed my attention and the movie looked far from cheap because of it.

While Fire Down Below is an average 90s action movie, it is way better than many of Seagal’s DTV-efforts. From this perspective the movie actually has gotten better over the past few years.