In 18th century London the orphaned Fanny Hill, a young, pretty and extremely innocent woman is employed as a chambermaid for one Mrs. Brown. Mrs. Brown’s occupation is that of a madam as she’s running a brothel something which Fanny doesn’t realize due to her innocence. Mrs. Brown however has other plans for Fanny who is of course still a virgin and holds up morals like kissing should only be done on the cheek by a close acquaintance. Having a young virgin available for someone willing to pay top dollar, or in this case pound, is the main reason for her interest in taking Fanny in.

They turned it into a farce. 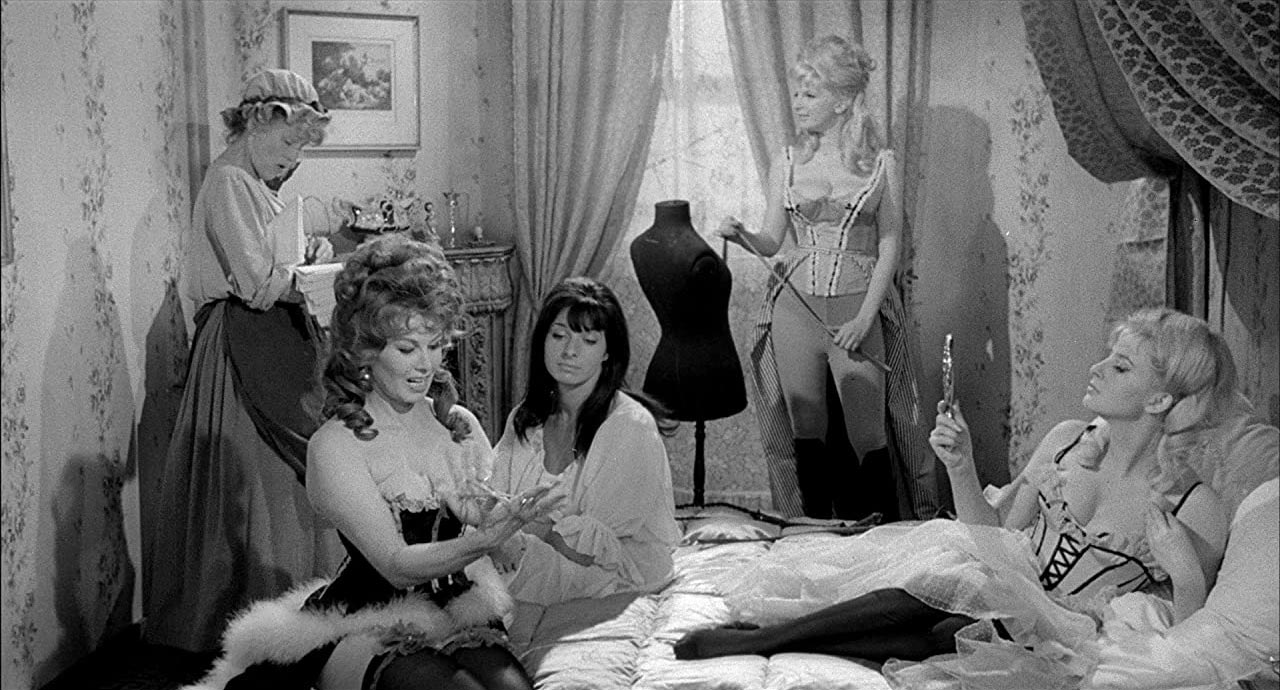 I have not read the book so I’m not sure how obscene it actually was, but given that people had other, more uptight morals back then it shouldn’t surprise me if it was all quite tame. Yet here is a movie that tries to go for laughs every chance it gets and features no scenes with any sexual tension or titillation whatsoever. Aside from some cleavage from the ladies in the brothel and a shot of Fanny’s back as she exits a bath tub there’s nothing truly arousing on display here. Even when Fanny walks in on several of the other girls, who she thinks are all relatives, with customers they’re always in the phase of kissing. The center point of the humor and gags comes from Fanny being so extremely innocent she’s oblivious to all the intentions men have with her. This results in scenes where a supposedly sleep walking man is trying to get it on with her in her bedroom and after a chase throughout the room she grabs the chandelier and swings on top of her four-poster bed. The chandelier of course ends up on the sleep walking man’s head after which Fanny apologizes for waking the man up.

It’s all very goofy as you can tell.

The subtitle of the movie is “Memoirs of a Woman of Pleasure” which isn’t correct. The movie revolves around Fanny and is told with a childlike voice from her perspective. Her way of pronouncing her lines is reminiscent of an adult reading a story to a child. Fanny however is never a woman of pleasure nor is there any moment she pleasures a man, well at least not sexually. She is a cartoon character in this movie. I’m not sure how old she’s supposed to be as it’s never mentioned, but her attitude towards the world is very childlike; still hanging on to things her mother told her, like keeping yourself away from boys. She looks like she’s in her early 20’s (the actress was 23 at the time of filming) but acts like she’s 11. In fact, there are 11 year olds today who are less innocent than the character of Fanny Hill is in this movie. 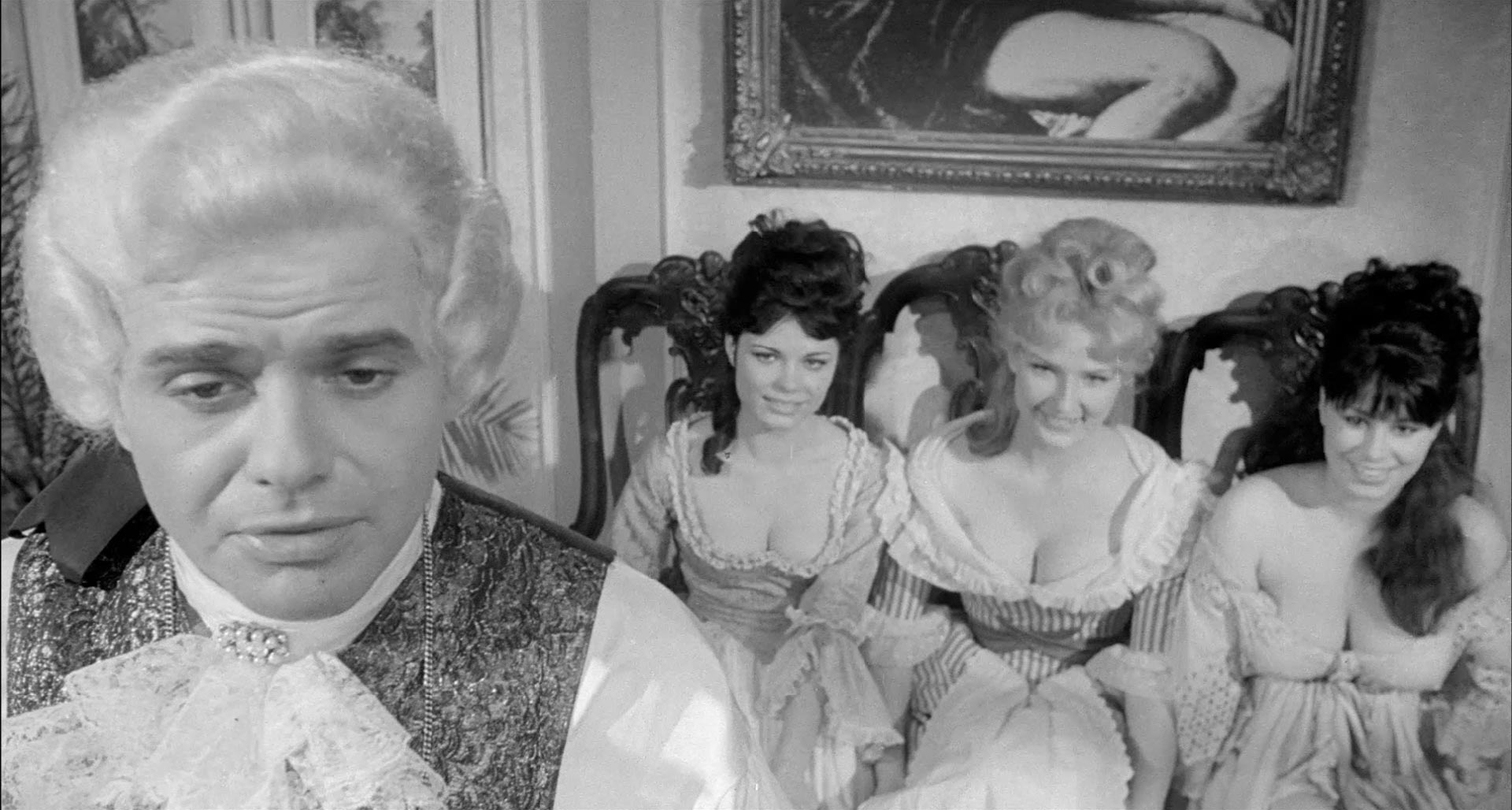 If his name wasn’t on the credits you would hardly recognize this as a movie Russ Meyer directed. I’m not sure how much of it was directed by him as the uncredited Albert Zugsmith is also responsible for directing this movie according to the iMDB and it’s documented that he wanted to make a comedy while Meyer wanted to take a more serious approach to the material. Seeing as Meyer’s other movies released during this period all had a serious approach to them (Lorna, Mudhoney, Motorpsycho! and Faster, Pussycat! Kill! Kill!) it seems Zugsmith was more in control than Meyer was. There are very few of Meyer’s trademarks to be found in this movie. There are no excessive close-ups of cleavage and/or nudity, the main actress hasn’t got an enormous rack and there’s not even a shot of a radio. Considering this takes place in 18th century London that last one makes kind of sense. The only Russ Meyer touch on display here is the choice for black and white instead of color and the 1.33 : 1 aspect ratio.

It’s funny Meyer has made an adaptation of a book that has been the subject of controversy and has been banned in multiple countries for great lengths of time, when he would go on to make a movie about a banned book several years later: The Seven Minutes.

Fanny Hill: Memoirs of a Woman of Pleasure is rather tame compared to Meyer’s other work. The result is a hit and miss comedy which made me laugh on one occasion yet cringe on another. It’s obvious the neither Zugsmith or Meyer had their original vision for this movie realized as they probably had to compromise too much to the other party. The set design is nicely done, and it’s nice to see a movie by Russ Meyer that for once doesn’t take place in the country-/desert sides of America, but it’s by far not a classic and feels rather dated.

Fanny Hill: Memoirs of a Woman of Pleasure