Driven To Kill is visited by the ghost of Seagal-past, a ghost we have only seen glimpses of the in last couple of films (Pistol Whipped, Urban Justice) and was completely absent the years before that. This time the ghost stages a more lengthy exhibition of itself as Seagal finally starts putting more and more effort and energy into his straight-to-video releases. After killing his ex-wife and almost doing the same to his hard to kill daughter Seagal goes out for justice and a kill (or 2, 3…) These are the vintage Seagal plots we all came to love almost 2 decades ago so I was actually thrilled to see this flick and was curious to see if the fleshy fighter still had it in him…

Seagal, for once, doesn’t play a cop but a Russian mobster-turned-writer named Ruslan who’s publications are non-fiction books, mostly about his past. He has daughter who lives with his remarried-to-a-lawyer ex-wife. She’s about to get married to the son of a Russian mob-boss who doesn’t want to follow in his fathers footsteps. On the day of the marriage gangsters break into the mansion of the lawyer, kill his ex-wife and hurt his daughter lethally. At the hospital it’s clear she will survive but Ruslan tells the doctor to declare her deceased so that she won’t be a target in the near future. Yup, that’s a piece of Hard To Kill plot right there! Now Ruslan goes out to find out who was behind this attack and kill them, violently. His buddy this time is the wimpy groom, Stephan.

So there you have it. It’s a low budget version of Taken mixed up with Hard To Kill and other early Seagal flicks and it’s a welcome addition in a world where they have pitted Seagal against zombie/vampires or whatever those things were in Against The Dark. What a boring crapfest that was! They get a lot of things right this time that were wrong the last couple of years. Gone are the partial redubs of Seagals voice, gone is the Eastern European setting (even though the dvd cover feautures exploding Russian buildings, these are not in the movie. Everything’s situated in America), gone is the extensive use of obvious stuntdoubles and gone are the lack of fighting scenes. Seagal even looks more muscled than fat this time. He’ll never be as pumped as Sylvester Stallone, but his arms did look muscular in this movie. Stallone btw uses steroids, Steven just drinks Lightning Bolt as a supplement so it’s not a fair comparison. I was stunned how close Driven To Kill came to the oldschool feeling and it even makes me crave more for an Under Siege 3.

Now of course this movie isn’t perfect, far from it. But when you’ve been dumped into years of abysmal releases this feels like a breath of fresh air. But there are some annoyances:
Seagal’s voice/accent. Seagal does a thick Russian accent. Unlike in Half Past Dead he actually keeps it intact the whole movie but it’s really hard to understand him and I’m even wondering if he wasn’t dubbed entirely because he sounds so different, but I’m pretty sure it was Seagal’s own voice.
There’s this scene in a strip-joint. This is of course a fairly easy way to throw in some naked hot tits & ass, only all the tits were badly done silicone-jobs. You know, those girls who go from an A-cup to a Double D which gives them two of those ugly hard balloons on their chest. Seagal’s movies had silicone-tits in the past but at least they were perfectly done (watch Under Siege for proof!). But come on, if you need some chicks to do some saucy dancing just get a couple of girls who at least have 100% natural tits, they’re not too hard to find. Even the porn industry is full of them. Just get Gianna Michaels to do her thang!
Then there’s one artistic annoyance. Now the director, Jeff King, who also directed the previous Seagal film Kill Switch, must have thought it was stylish to show Seagal walking depressed. We see Seagal walking and in the background there’s a ladder or something. Now Seagal walks in the camera and every 2-3 seconds we get another cut of Seagal coming any closer. It looks like it’s some sort of montage, but then you see the ladder in the background the whole time and you realise we’re seeing Seagal walk the same 20 metres 10 times over before he actually walks past the camera. It can be compared to the already infamous window scene in Kill Switch where we saw one guy flying out of the window 10 times. Jeff King must like repetition I guess. 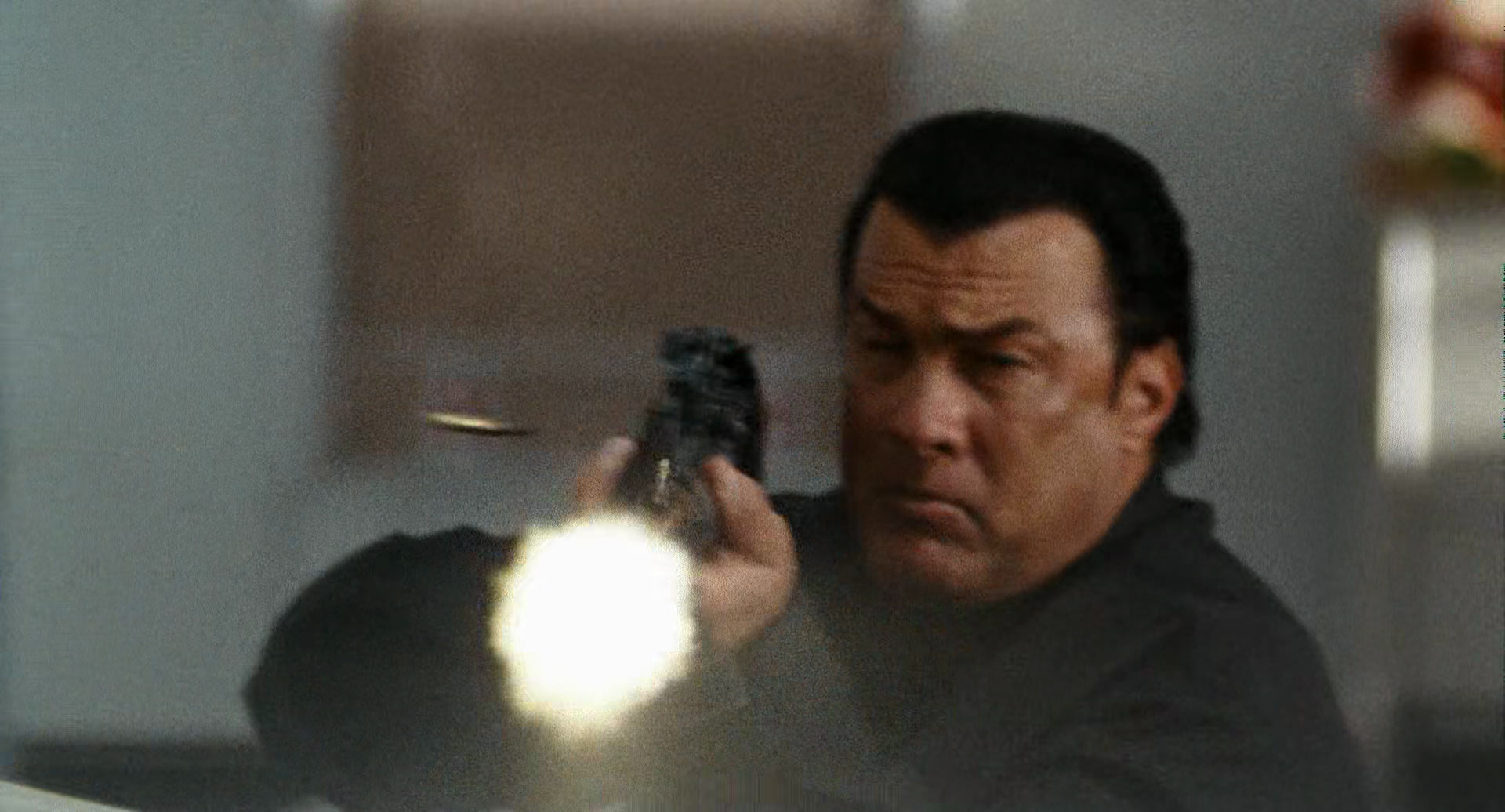 The fightscenes must be mentioned of course as they are what made Seagal an action star in the first place. They try to go back to the early days but don’t reach that place. Even though there are no obvious stunt doubles and Steven actually uses his legs again (even for running!) most of the action is shot from very close up, which I dislike as Seagal’s action scenes come to their fullest right when the camera takes a step backwards to shows us the entire fight from a spectators view. Sadly, a missed point. I hope that in his next movie this will finally return.

So Driven To Kill isn’t the best Seagal flick out there but it’s a welcome addition to his filmography and I sincerely hope that this movie will be followed upon with even better efforts, I’d hate to see the guy leave the scene (who knows how long he’ll keep on doing making films) in a crappy movie.