Ah, the classifieds in the papers. With all the dating and sell-your-stuff sites nowadays it’s hard to imagine people communicated through classifieds in the newspapers back in the day. With dating ads it’s always fun to imagine who the person is behind an ad. Roberta Glass, a bored house wife, reads these ads every day and follows the communication between a Susan and a Jim. When they set up a time and a place through an ad in New York she decides to spy on them just to see who these people are in real life. Intrigued by this Roberta starts following her around even buying a jacket Susan sells to a secondhand clothing store. When she finds a key in this jacket she decides to place an ad herself to meet Susan and give her back the key. But a gangster is after Susan also and through a series of unfortunate events Roberta ends up with amnesia and is mistaken for Susan by the gangster as well as the best friend of Susan’s boyfriend, a guy named Dez.

Yes, Desperately Seeking Susan is one of those movies were the main character is mistaken for somebody else by everybody else and due to the amnesia even by herself! This seems to be a set-up for a comedy, but the majority of the movie’s running time has Roberta enjoying a more adventurous life as Susan, including a new love interest and a gangster who’s on her trail. Madonna’s character Susan is a drifter, and doesn’t differ much from her rebellious pop star image at the time. The movie even has her walking around on the street in nothing more than lingerie and a jacket. She, in pursuit of Roberta, ends up with Roberta’s boring bathtub salesman and they end up smoking weed and such.

The most attractive aspect of the movie is how 80s it is. Madonna, A gritty depiction of New York, the clothing, the hair, the ads in the paper, the neon lit sets; this is a movie that is anything but time-less. It’s a sense of nostalgia that is the sole redeeming factor of this movie. It’s nowhere near to being a classic, but watching it, it does feel like going back 30 years to a period when comedies weren’t great but never so bad as all the cheap spoofs that have been flooding us over the last few years.

Too bad nostalgia is the only redeeming factor. The plot depends on so much conveniences it’s impossible to ignore them. The amnesiac Roberta takes over Susan’s life(style) but just so happens to meet the one guy who knows who Susan is but doesn’t know what she looks like. The acting is hammy, but then again they aren’t really helped by the dialogue. This was Madonna’s first role and she kind of plays herself here, so the movie doesn’t require her to really act.

What I did found peculiar was how the movie handled the romance aspect of the married lead character. She’s bored, no doubt about that, but her husband is hardly a dick-head and when she’s missing he goes out to look for her and is seriously worried. He might not be the most exciting guy, but he provides a decent income and even doesn’t nag Roberta on “not liking sex all that much”. Now Roberta thinks she’s Susan and is obviously attracted to Dez. When Roberta hits her head again and remembers who she is, she calls home only to hear the actual Susan picking up the phone, so she does what any normal woman would do. Go to that attractive guy you just met 24 hours ago and have sex with him. And Dez, great friend that he is, has no problem jumping in the sack with Roberta whom he still thinks is Susan, his best friends girl friend. In the end I felt sorry for Roberta’s husband; here you are doing your best to put food on the table, one bump on the head and your wife is out banging a lowlife. 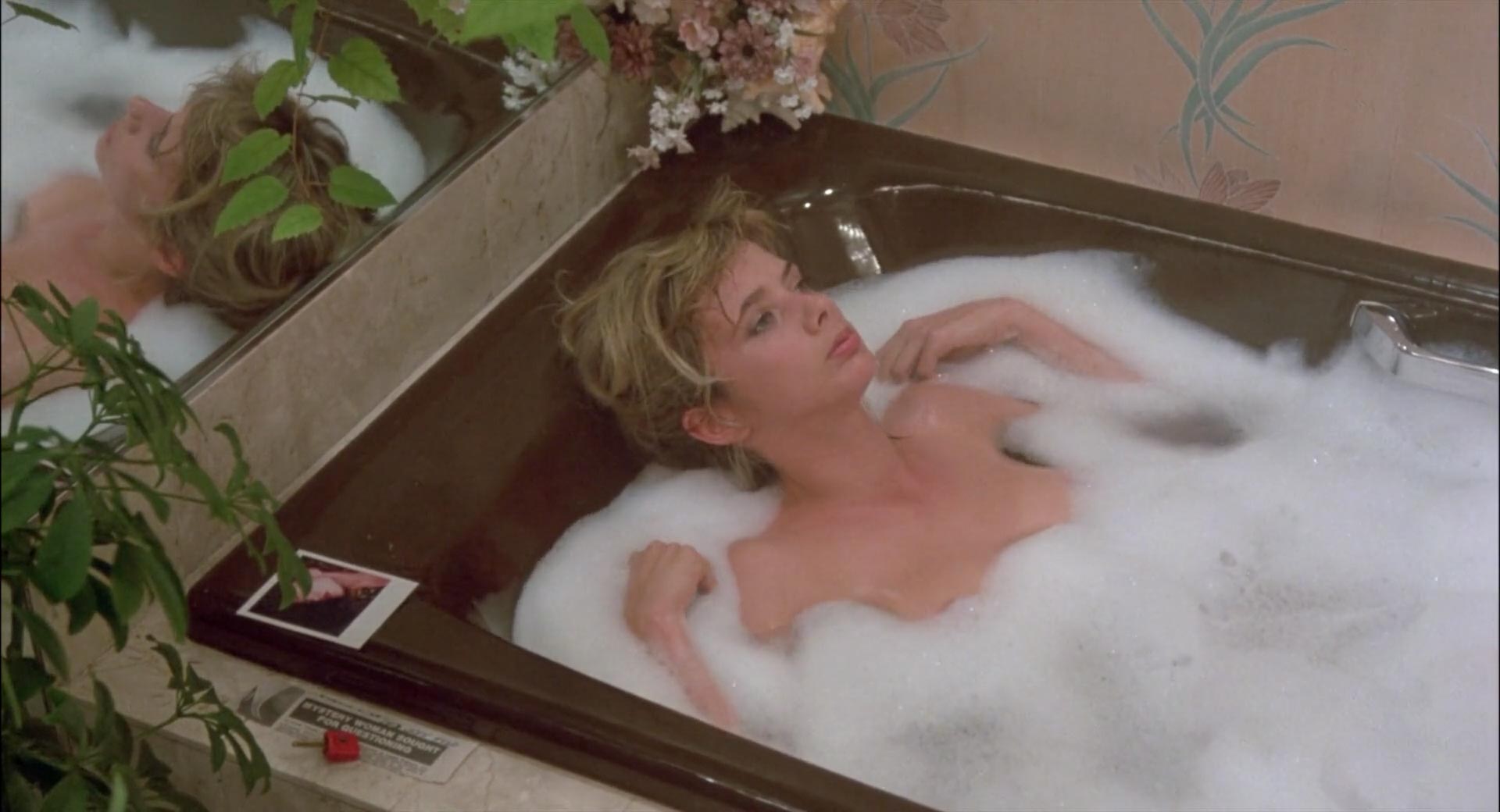 It’s also notable that the movie was toned down in order to receive a PG-13 rating. Some scenes have Madonna in a see-through bra and really subtle scenes where we just get a slight peek at Arquette’s boobs. There’s a sex scene on a pinball machine that really felt trimmed down. It’s a bit weird to see Madonna walking around in underwear multiple times and two (post-)sex scenes when the rest of the movie is clearly aimed at a teenage crowd.

Desperately Seeking Susan is a mediocre movie with nothing really standing out. It surprises me that when it was released it actually got good reviews and even garnered Arquette a Bafta-award for her performance. Maybe I would have liked it better when I saw this movie at the time of its release, but all I can say that it apparently hasn’t aged well.