Derailed is pretty much considered to be one of Jean-Claude van Damme’s worst movies. With titles like Street Fighter, Double Team and Knock Off under his belt that’s saying something. By the time Derailed was released this was already at least the 3rd movie using the “Die Hard on a train” concept, and when you’re starting to remake Steven Seagal movies you’re doing something not quite right. You could draw a parallel between the subject matter of this movie and Van Damme’s career: when he made this his career was a actually a derailed train wreck.

In Derailed Van Damme stars as NATO operative Jacques Kristoff who must escort super thief Galina Konstantin (Laura Harring) out of an Eastern European country since she’s in possession of three vials of smallpox. To do so they go by train which is hijacked by a ruthless terrorist who wants the vials and has had a personal relationship with Galina. To make things worse one of the vials breaks, making the majority of the people on the train sick including Jacques’ wife and children who’re also on the train by coincidence. Since this is a rip-off of Die Hard, Van Damme becomes a one man army who will save the day.

Derailed is a pretty awful movie, but the one person who can’t be blamed for this is Van Damme. He brings the same intensity to this part as he does in most of his other movies, even including some new fighting techniques. When his son supposedly dies he brings out some tears as too. Convincingly, I might add. 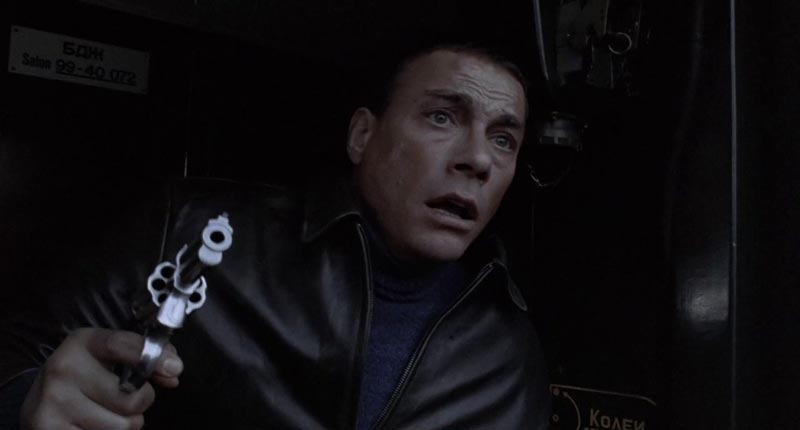 What really destroys the movie is the bad direction, plot choices, low budget and rehashed setting. The movie actually begins fairly decent with super thief Galina stealing stuff and using her seduction techniques on several men. When she’s paired with Van Damme the two actually have some chemistry and expectations rise that this might become a fun movie of them taking on several bad guys while having this untrustworthy relationship at the same time.

Galina is tossed aside as soon as Van Damme’s wife boards the train and the terrorists quickly take over. Her role is minimized and she interacts mostly with one of the blandest villains in movie history. Mason Cole (Tomas Arana) lacks charisma and the script writer never really gives him anything menacing to do or say. Director Bob Misiorowski is a hack using every digital trick he has to his disposal even if they have no function resulting in various moments where the editing is, simply put, terrible.

Also a train is a pretty awful choice for a Die Hard rip-off location because it’s just one cart after another. Buildings, ships and planes at least have several levels something the train here lacks. In Under Siege 2 they got away with it by having the train have several types of compartments, levels and an entire mid-sequence which takes place off the train. To be honest, they steal that element too when Van Damme gets off the train on a motor cycle. Also it takes at least a half hour before the train is boarded so they actually realized what limited options they had with this setting I guess.

Because there was probably hardly any budget the effects also look terrible. There’s a sequence where Van Damme rides a motor cycle on top of a train which is one of the most unconvincing green screen scenes in cinematic history. Since this movie’s called “Derailed” and features several trains it should come as no surprise that this happens actually. The good news is that all the scenes in which a vehicle derails or is blown up haven’t been done with CGI. The bad news is that instead of CGI they use scale models which are obviously recognizable as such. It’s like watching Gomez Addams playing with his scale model trains all over again.

Derailed could have been so much better if it had a different setting, a better budget and better direction. It’s clearly one of those el-cheapo Eastern European set movies which Steven Seagal also started making at the same time. The only small redeeming elements it has is Van Damme giving it his all and Laura Harring’s sultry seductress. Other than that this movie is a train wreck.