Cutting Class is one of those movies I never knew even existed. Not until I was going through a budget DVD bin at a record store years ago and saw this cover with the face of Brad Pitt plastered all over it. It looked cheap and my guess was that Pitt was probably only in the movie for like five minutes or so. But something else on the cover also caught my attention: the name Jill Schoelen. The cute girl from The Stepfather. Since I wasn’t going to spend my money on a cheap B-movie, which was probably a VHS-to-DVD transfer anyway, the movie faded back into obscurity for me. Until this week that is, when I stumbled upon it again in Hi-definition quality and decided to give it a chance.

Cutting Class is about a group of high school students. The main two characters are Paula (Schoelen) and Dwight (Pitt), who are a couple. When the movie opens Paula’s dad goes out on a hunting trip leaving her alone for the week. At the high school which Paula and Dwight attend, a student named Brian Woods (Donovan Leitch) returns to class after spending time at a mental institution. Brian was convicted of murdering his father but is seemingly cured. Despite being best friends once with Dwight, he is now treated as an outcast. Soon after Brian’s return students and teachers start to disappear at an alarming rate. Brian is of course the obvious suspect, but is he the real threat? 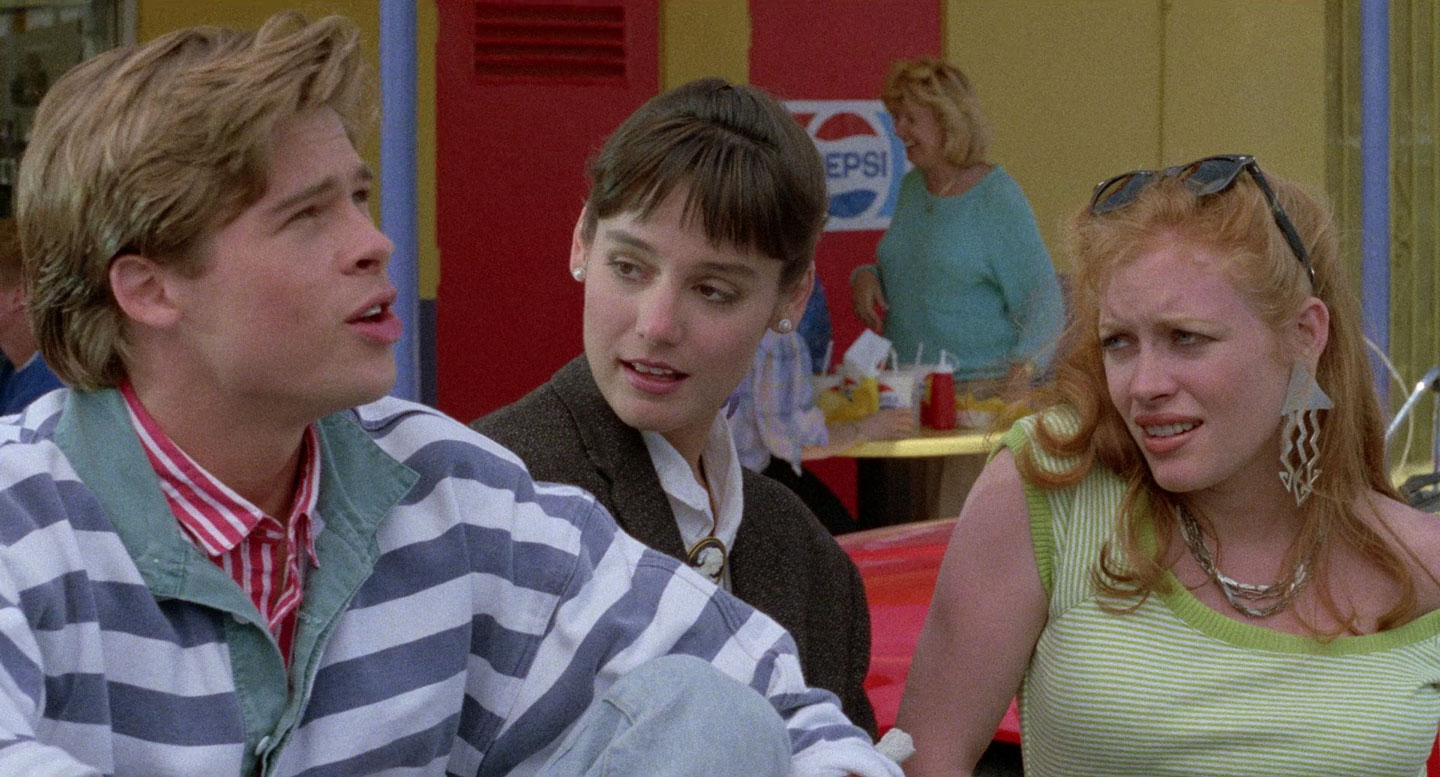 Cutting Class is a slasher movie. As a slasher aficionado this movie should be right up my alley. I’m always game for 90 minutes of teens being butchered. It’s not hard to make this type of movie entertaining. Just throw in a group of hot teenagers, some nudity, a masked killer and some suspense. Easy, peasy!

Somehow this movie fails on almost all of the requirements. There is a cast of hot teenagers sure, but it’s a very small group consisting of only five persons. One of which is deemed to be the killer. In fact, most of the killer’s victims tend to be adults. The first to be attacked is Paula’s dad while he’s hunting. The murders then switch to the school where a variety of teachers are taken out one by one.

The murders are shot in a way it’s not clear who the killer is. Normally movies tend to use P.O.V. shots to obscure the killer’s identity. In Cutting Class they use this technique sparingly, but when it’s used it feels rather hokey. Especially in a scene where two teens are being killed under the benches during a basketball game. This scene is shot in such a terrible way that it takes out everything a scene like this is supposed to have. A novelty death, suspense and what not. There is a novelty death featuring the vice principal and a copy machine. 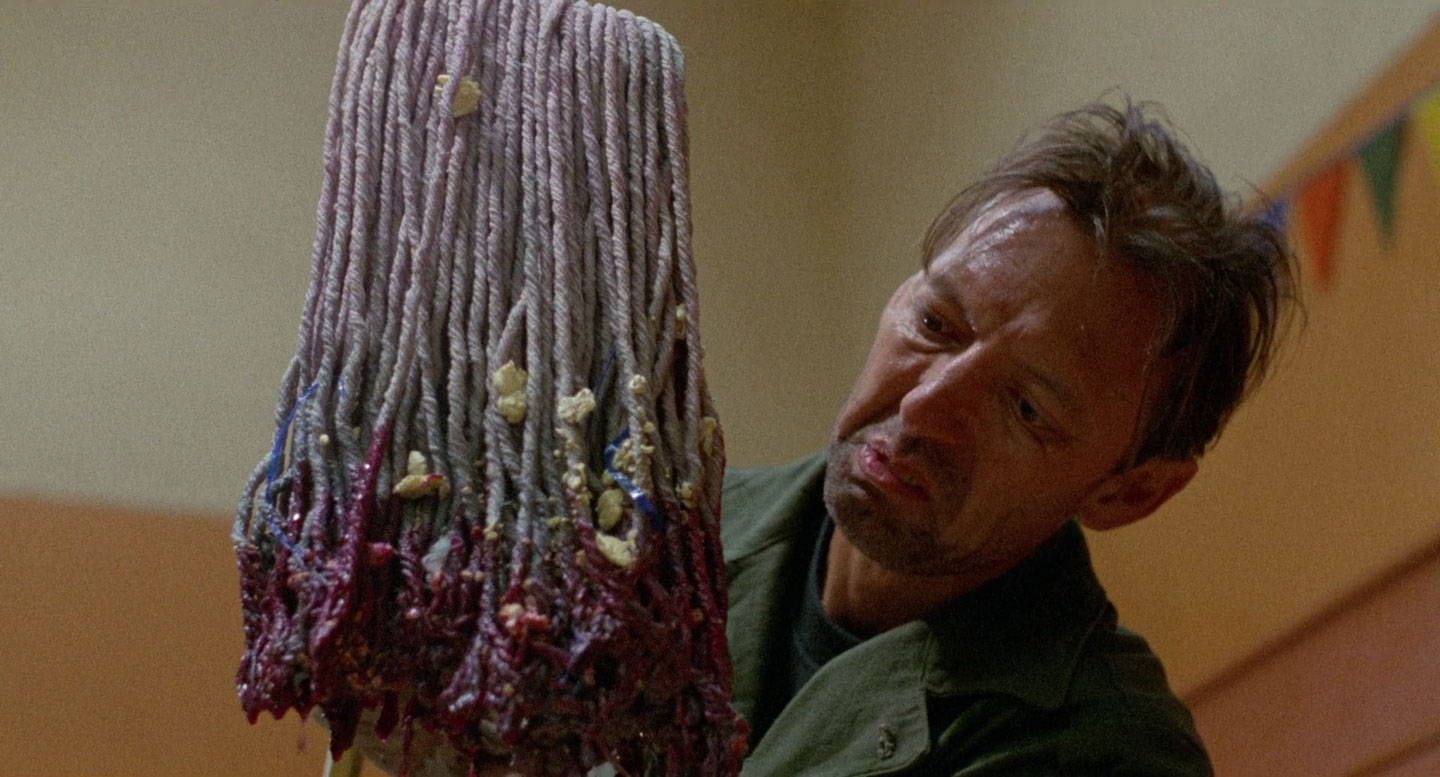 Being the train wreck that Cutting Class is, it permanently derails in the final act when the identity of the killer is revealed. The reveal of the identity of the killer is actually even worse than that of the killer in Friday the 13th Part V. Normally when people make a “whodunnit” movie, they throw in some clues here and there as well as a couple of red herrings. One of the reasons the original Friday the 13th worked so well was due to the twist ending. Up until the final 15 minutes everybody assumed Jason was the killer. But wait! Surprise! It’s actually his mother! What they don’t do is have the killer be the one person they’ve been pointing big red arrows at the previous 70 minutes. But Cutting Class does exactly that. Surprise!

After the reveal the goofiness really starts when a cat and mouse game ensues through the school between the killer and Paula. It consists of scenes like one where she suddenly has to solve a math puzzle (how did the killer even know she was going to end up in the math class room?). The finale consists of a lengthy fight scene in the auto work shop featuring a variety of tools. During all this the killer sets the hammy acting notch to eleven. It reminded me of the legendary “garbage day” scene from Silent Night, Deadly Night 2. 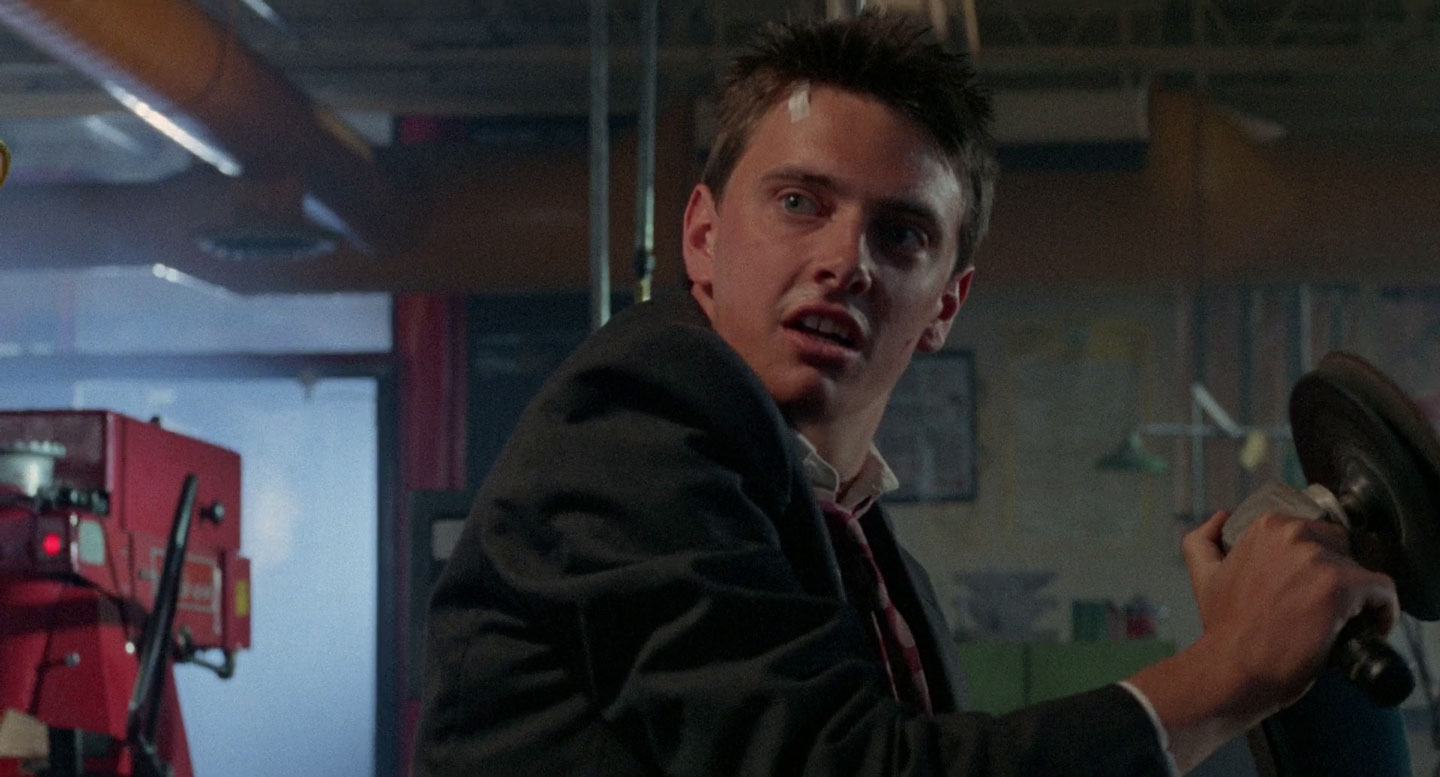 The most problematic character of Cutting Class is Brian. The movie gives most of the characters some shady traits, enabling the audience to think of them as the killer. Dwight has a controlling father and seems a bit possessive of Paula, the janitor is just plain weird and the principal is a pervert lusting after young girls. But Brian, as the cured mental patient, is constantly presented as a weirdo and possible psychopath. Not only does most of the performance of Donovan Leitch consist of awkward stares, but he shows a lot of stalker traits when it comes to Paula. Like spying on her when she’s modeling for art class or posting outside of her house at night.

He also seems to have teleportation powers because he’s always there where the script requires him to be creepy. When he’s posting outside of Paula’s house, she’s picked up by Dwight in his car to go break into the school at night. We get a shot of him on his bike looking at them as the car disappears in the distance. The movie then cuts to Paula and co. actually breaking into school and into the principal’s office. When the camera focuses on the water cooler it shows that Brian is hiding behind it. I don’t know how fast Brian goes on his bicycle, but he seemingly can give Lance Armstrong a run for his money. 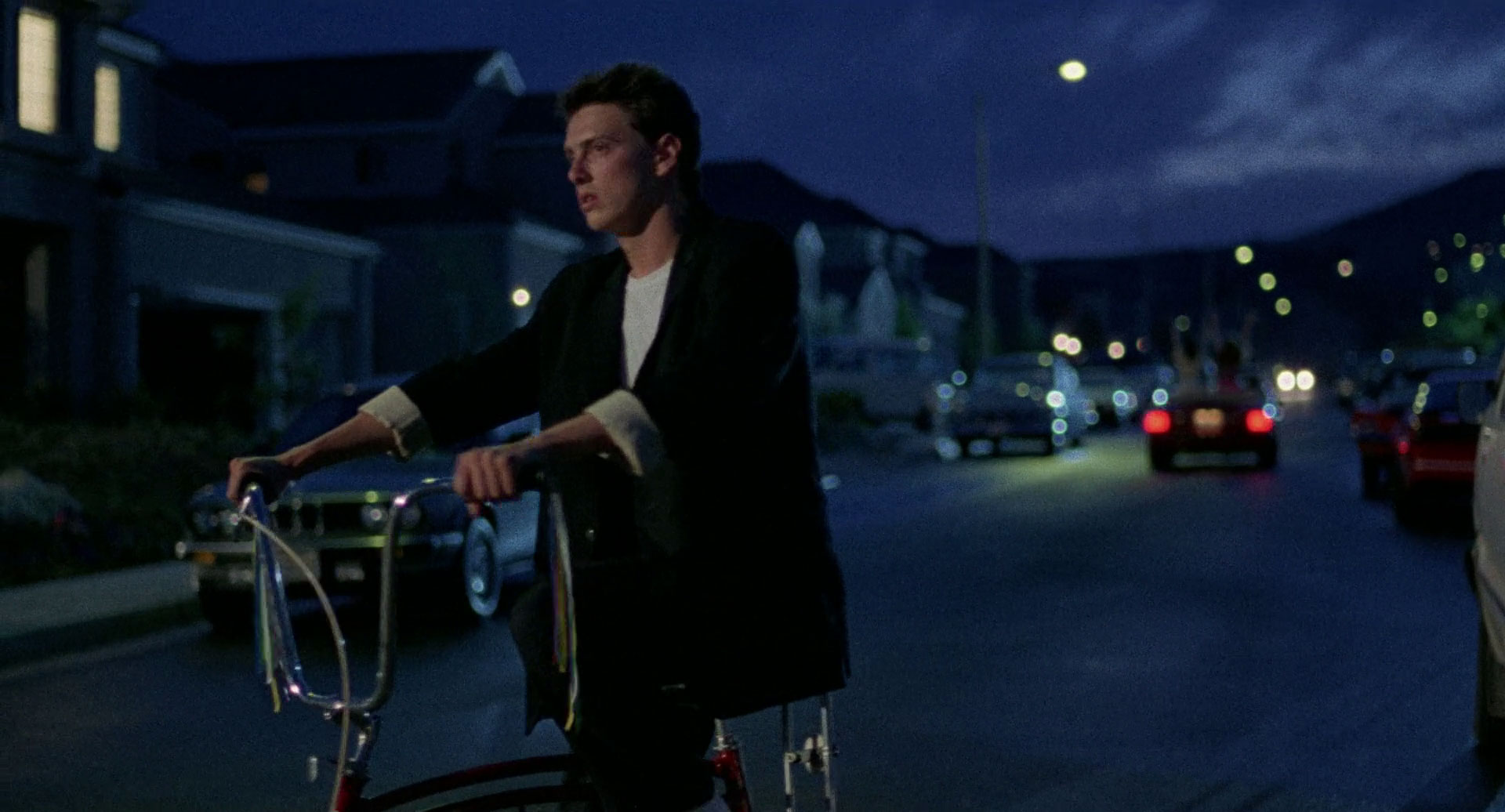 This guy can go faster than a car on his bike

There is also a small subplot about Paula’s father who apparently survives the attack at the beginning of the movie. The movie occasionally cuts to him as he’s trying to get out of the woods and back home. These scenes appear to be created for comedic effect. They culminate with a reunion between father and daughter at the end of the movie, but not without some last thrills involving a car without properly working breaks. Scenes like this make the movie feel as schizophrenic as Brian. Is it a slasher movie, or a parody and are we supposed to laugh at all these goofy scenes? But if so, then why is most of it played so straight then?

During her short-lived movie career Jill Schoelen manifested herself as a husky-voiced “scream queen”. Mostly appearing in horror movies. She is mostly remembered as the resourceful stepdaughter in The Stepfather. In Cutting Class she’s a classic final girl and the movie gives her not much to do but be the friendly girl who ends up coming eye to eye with the killer.

Director Rospo Pallenberg seems to be obsessed by her butt and legs apparently. That’s only conclusion I can make as she’s in shorts, as skirt or less in every scene she’s in. I can recall only one scene in which she’s actually wearing trousers. Even the opening scene features her picking up the newspaper from the porch in a pajama she has to pull down in order for her to hide her panties. There’s even a gratuitous scene in which she has to pick up a cheerleader outfit in front of the principal. he makes her bend over multiple times giving him and the audience a clear shot of her butt. While this the most explicit or exploitative scene, the movie finds several excuses to show off her assets: scenes involving locker rooms, bathrooms or Brad Pitt trying to get to second base with her. 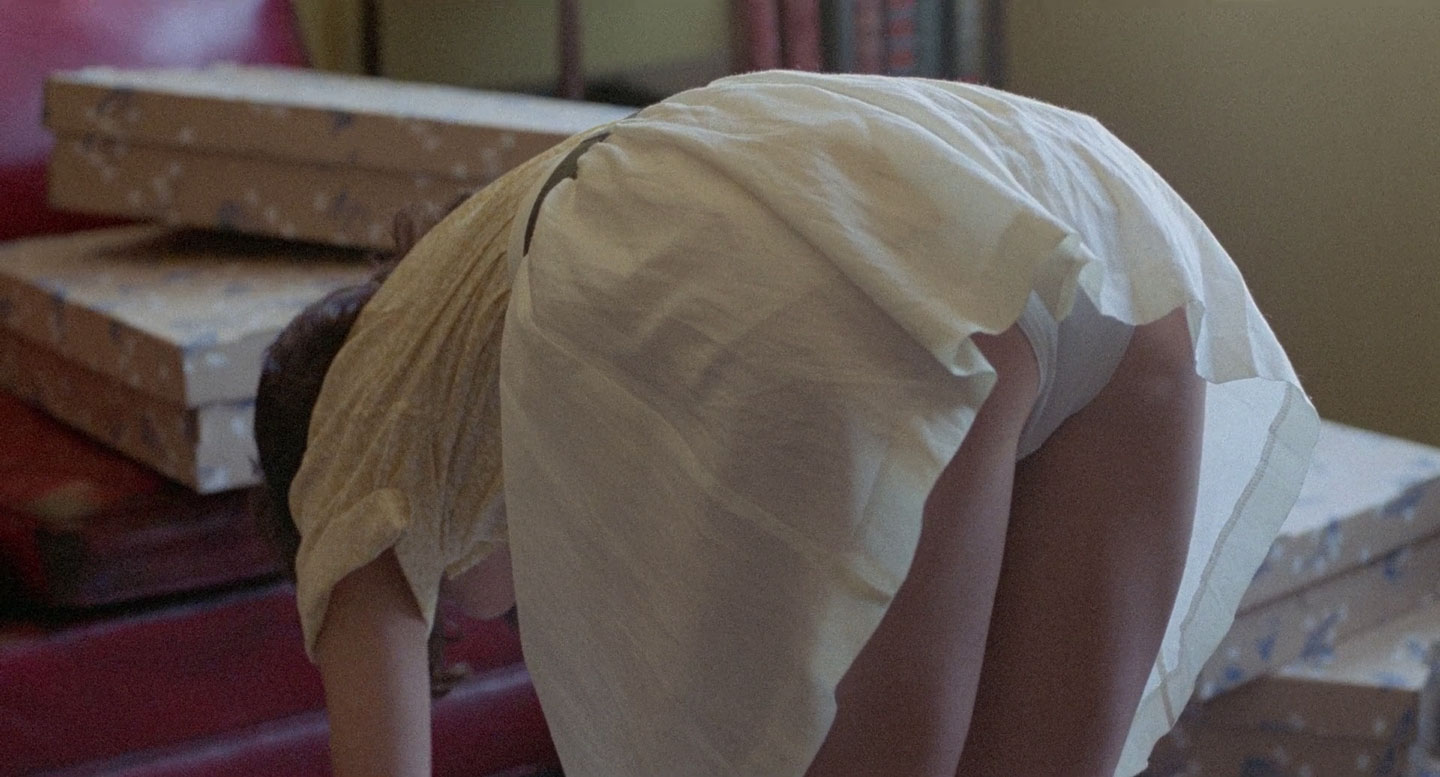 The most gratuitous butt shot in this movie

Cutting Class is one of the more mediocre slasher movies out there. Mostly due to bad acting and sloppy writing and a script that doesn’t know what it’s supposed to be. The movie even has five genres it belongs to listed on its iMDB page: Comedy, Crime, Horror, Mystery, Thriller. Apparently even the makers don’t know what genre it belongs to. This movie feels like it has been written by somebody who hasn’t finished film school. It seems that the makers themselves have been cutting class a little too much.