I was watching an episode of Starsky & Hutch the other day when it came to me that I have never seen iconic films from that time-period like Foxy Brown and Coffy. I knew of their existence and that Pam Grier stars in them. And I only knew Pam Grier from Quentin Tarantino’s Jackie brown.

I saw a few trailers a couple of years ago but they never motivated me to watch these movies. Those trailers were kind of corny, like most trailers from the 70s were. They have  that typical trailer voice saying stuff like “Coffy, Black” and “No one sleeps when they mess with Coffy” I didn’t actually know what to expect as trailers can be so deceiving. They put all the action in 1 minute and leave it up to you to find out that all the money shots from the movie are already in the trailer. Since I have finally seen the entire flick I’m going to tell you how I like my Coffy. 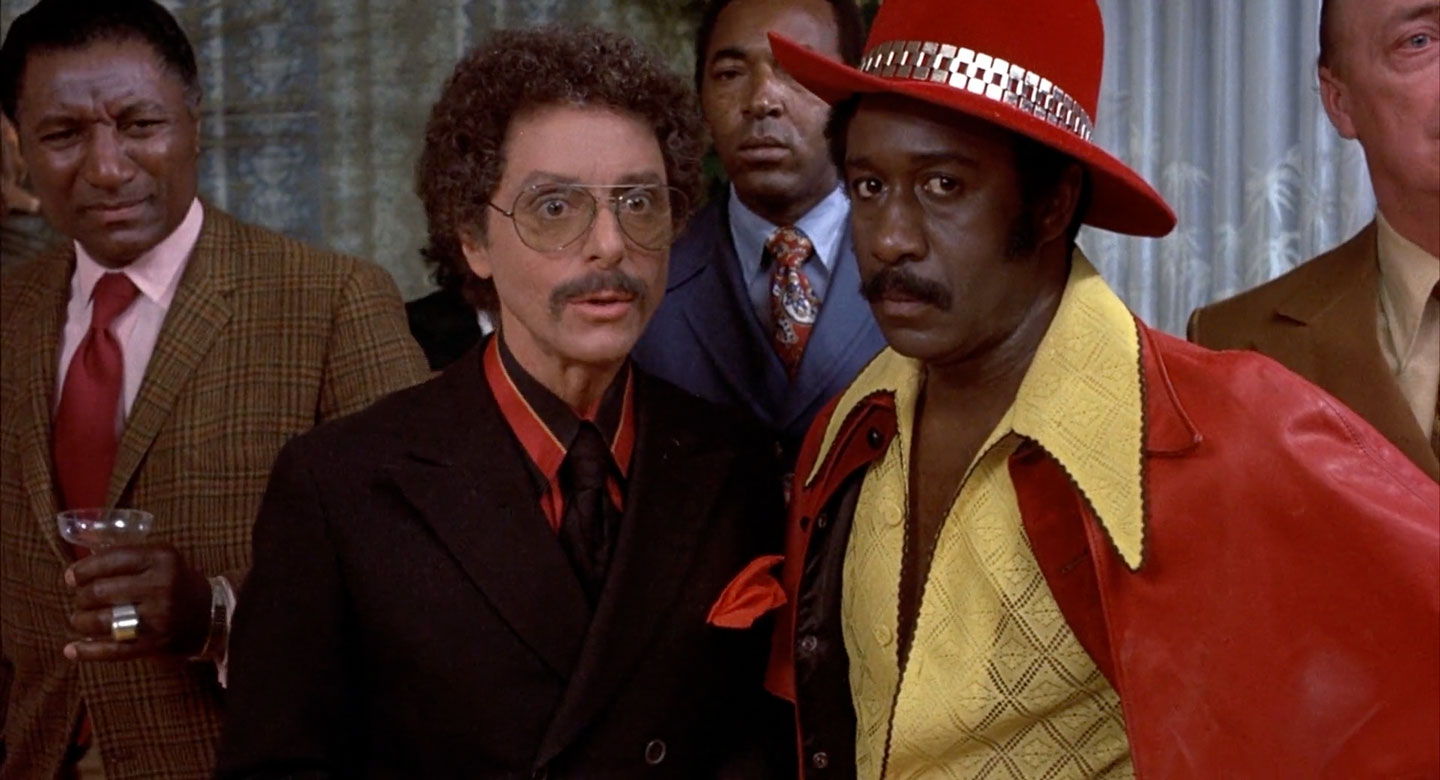 Coffy is a Blaxploitation film made in the early 70s when they were in their heyday. Coffy focuses ugly side of poor black communities as it deals with pimps, drug dealers, junkies and whores. In this movie an incredibly hot nurse named Coffin is gunning down drug dealers and pimps because her 11 year old sister is in rehab due to a smack addiction. Apparently all of Coffin’s sisters are involved in the drug scene. It’s tough out there you know.

The message is clear: Drugs are destroying the black community and Coffy is the cure. 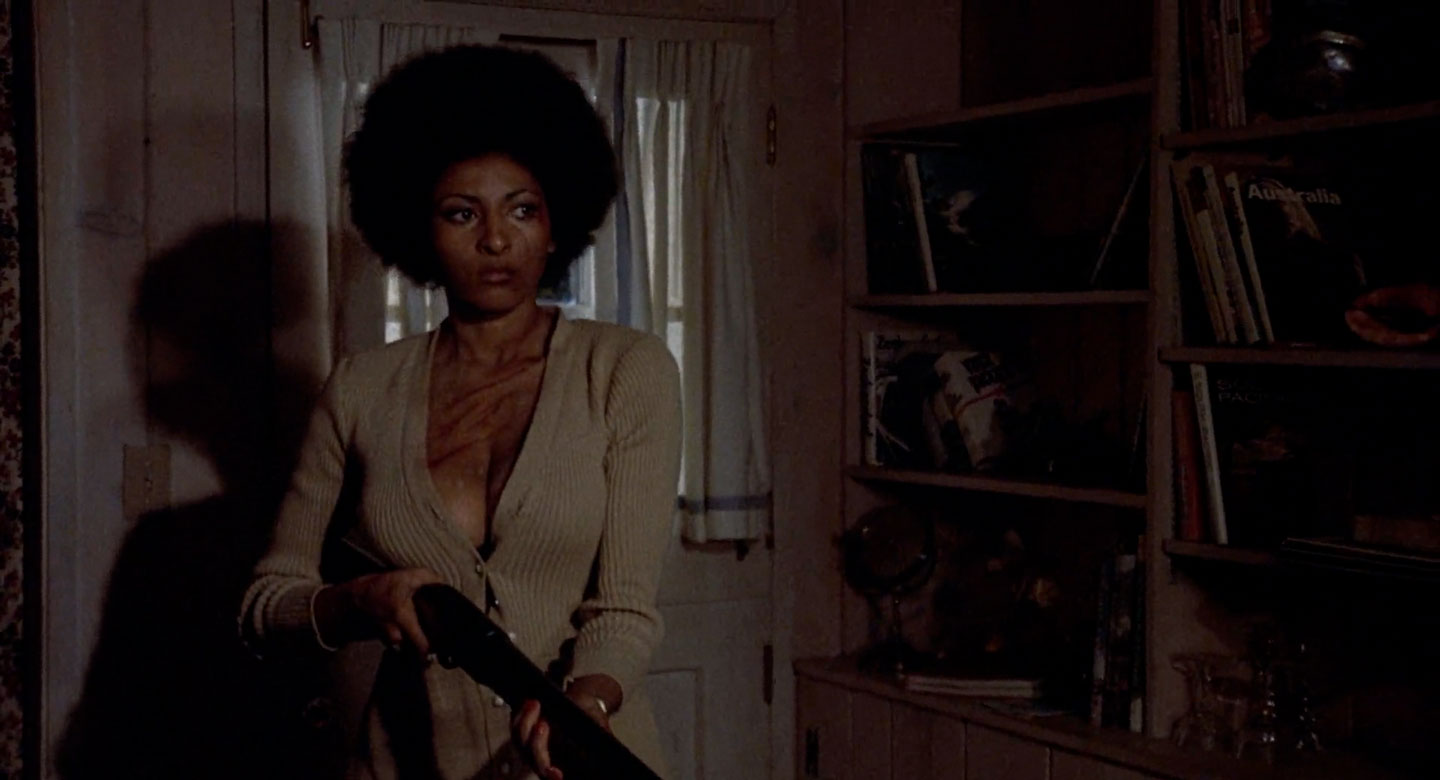 Pam Grier plays our titular anti-hero in a movie that is part skinflick. There are breasts and butts all over the place. There is even one scene where ten or so prostitutes are fighting with each other. They are tearing each others clothes to pieces leaving all the girls topless at the end of the fight. This scene alone covers the exploitation part in blaxploitation. Since some of the girls in the fight are black the black part is covered as well I guess.

Aside from all the gratuitous nudity there is also a story, albeit a simple one. It takes off after the opening sequence in which Coffy guns down her sister’s pushers. She is in a relationship with a political hopeful Howard Brunswick and she is good friends with a male cop named Carter. Carter is one of those straight cops that isn’t on the take. This leads to a severe beating which sends him to the hospital with brain damage.

Coffy is a witness to the beating and tries to fight of these goons. She is slapped around and her shirt is torn open exposing her breasts. Even though she rather well-endowed she isn’t wearing a bra. This movie uses any excuse it can find to show Pam in different states of undress.

Now Coffy has yet another reason to go on a rampage and start a vigilant crusade through the city. Her tactic: go undercover as a prostitute to find out who is behind all of this. 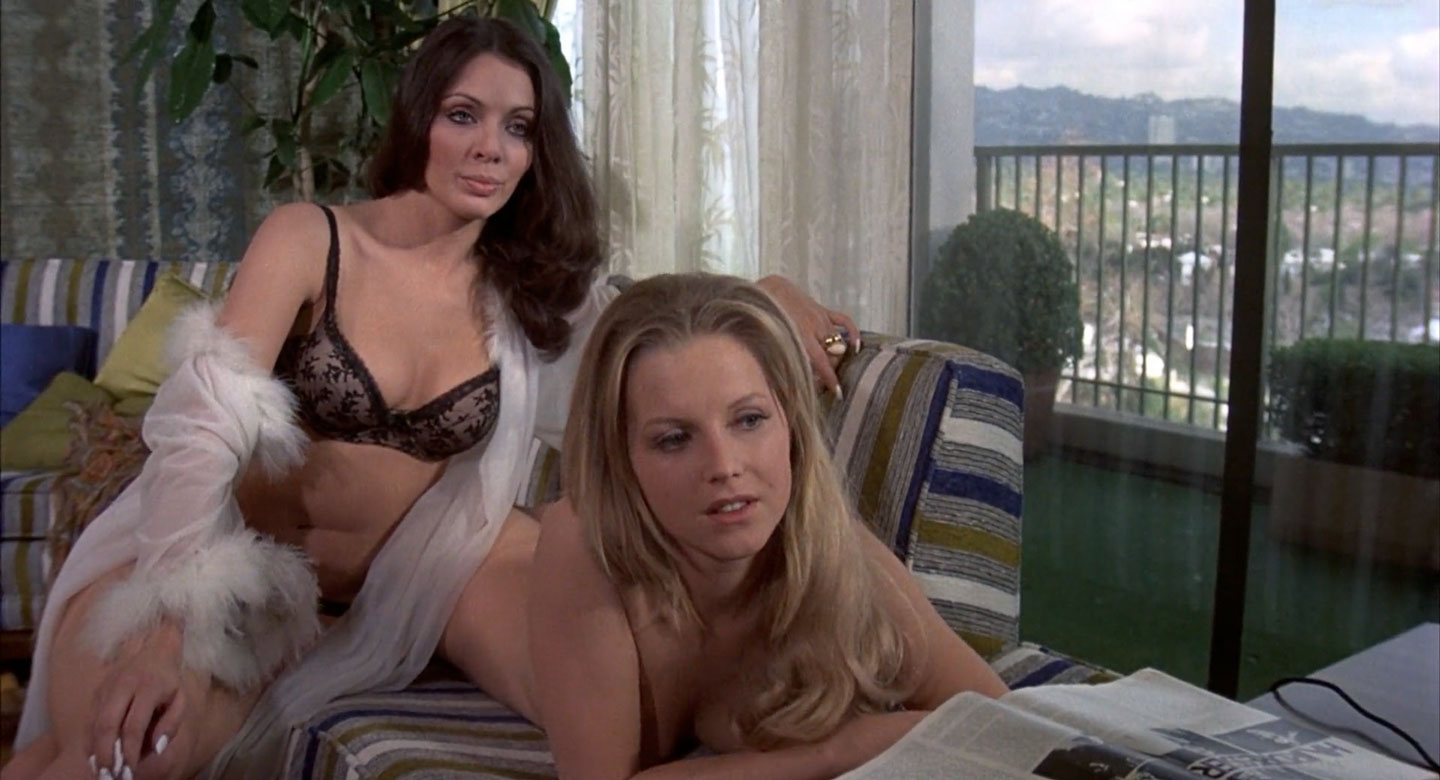 For a simple 90 minute vengeance movie Coffy does have some little twists. Take the character of King George for instance. He is presented early on as the bad guy. He’s even has his own theme song. It goes something along the lines of “King George. He’s a pimp. He’s a pusher. Yeahhh.” Instantly you know that this is one big cat. But it turns out that George here is actually a small small fish.

Posing as a prostitute Coffy uses him to get in contact with local mobster Arturo Vitroni. Vitroni apparently likes exotic women from faraway places. Therefor Coffy has to use a thick Jamaican accent to be his cup of tea. But Coffy gets caught while trying to kill Vitroni making the mob think that King George is behind the assassination attempt.

This results in a gruesome premature death for George. They tie a rope around his neck and attach it to car. You can probably guess what happens next. Let’s just say that there is plenty of gratuitous violence in this movie. What I also liked was how Coffy blows the same guy on two different occasions in two entirely different ways. It might sound cryptic now, but watch the movie. You’ll see what I mean. 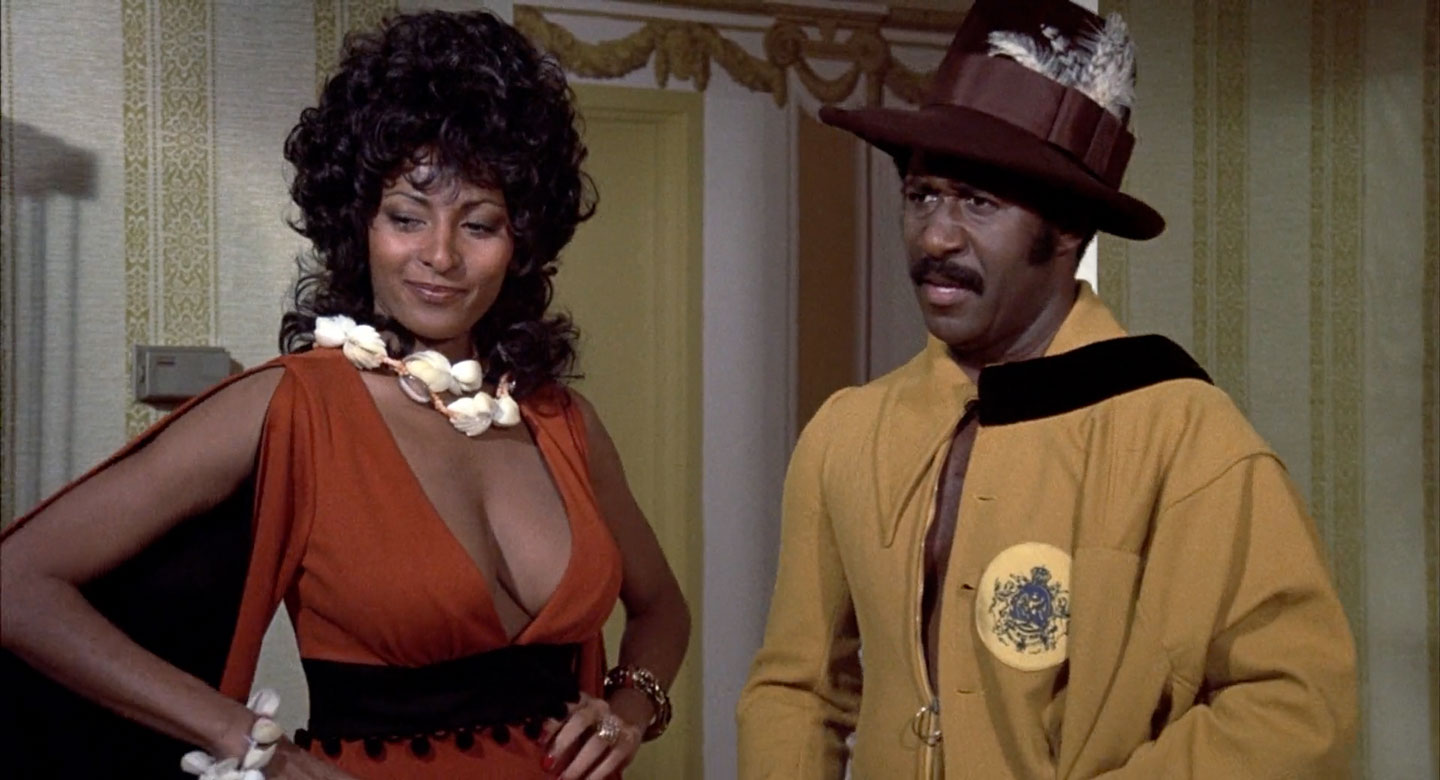 The movie is carried by Pam Grier in her first starring role. It’s hard to take your eyes off her as she has an incredible screen presence. Her character is also fleshed out more than usual. She has doubts if her vigilantism is the right thing to do. Nowadays she is a fine actress but back in the day she was still learning. Her acting varies from just adequate to simply atrocious. Especially when she does the phony Jamaican accent or tries to seduce someone who is holding her captive. I can not believe someone would fall for that.

She has come along way since then. But let’s be honest here: she isn’t cast just because of her thespian skills. Her breasts deserve a separate billing on the title credits. They are basically supporting characters in almost all of her scenes. 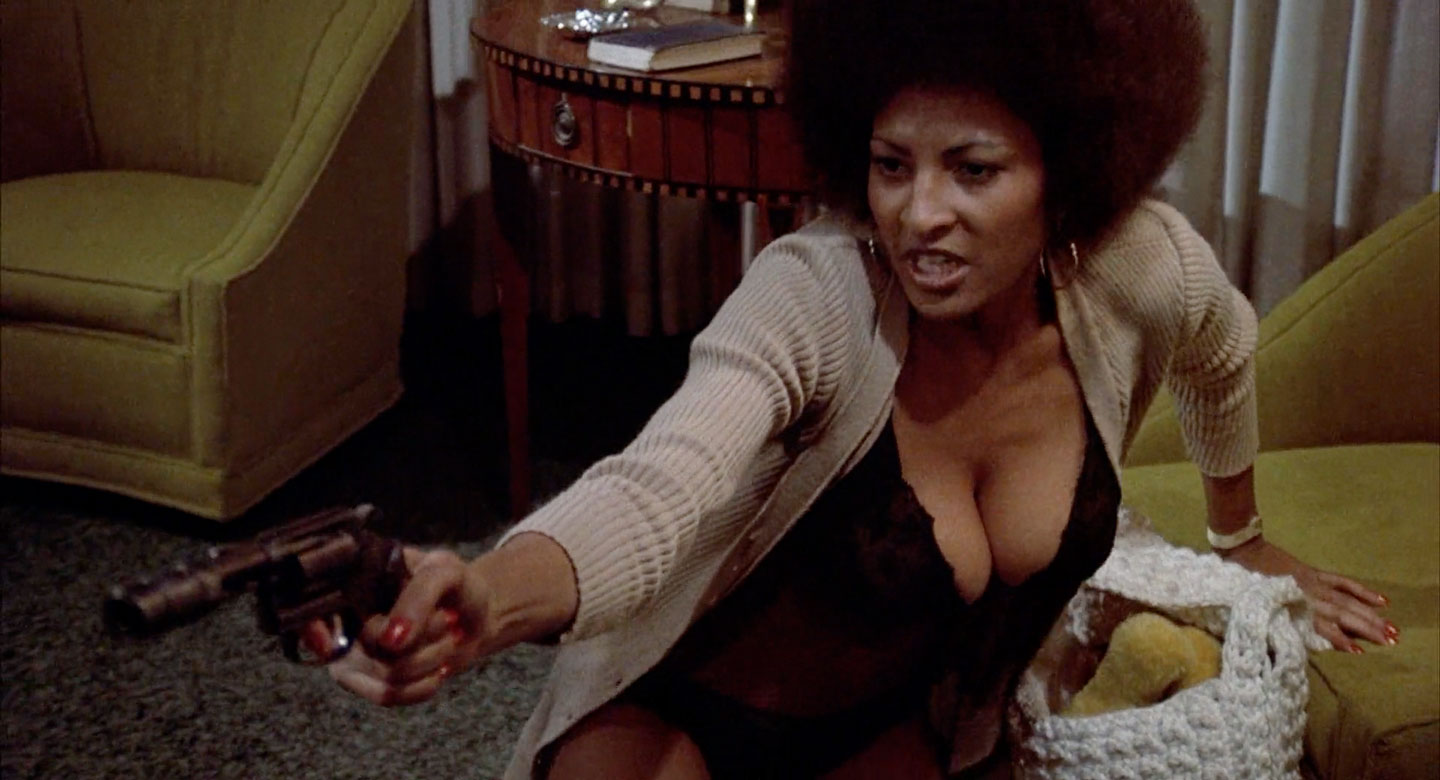 Bottom line: Coffy is a Blaxploitation revenge movie from the 70s. Not everybody might like it but I am amazed how well it aged. There are enough examples of other films from that time-period that are really hard to sit through nowadays. Coffy is not one of them. It is still a fast-paced movie which did not bore me for a second.