Cobra was probably the third character that Stallone wanted to turn into a franchise. After boxer Rocky and soldier Rambo he now plays street cop Cobra. That isn’t his real name of course. That would be Marion Cobretti, but since Marion sounds kinda sissy he calls himself Cobra. Cobra is as bad ass as Rambo is, but unlike Rambo and Rocky, Cobra doesn’t have a dramatic side to him. Rocky was the loser who got a million to one shot, Rambo was the guy with PTSD walking into the wrong town at the wrong time. Not Marion, no Marion is a cop who knows how to kick some ass and hasn’t got any personal problems other than the chief always having it in for him. He belongs to what they call The Zombie Squad. Not much explanation is done, but what I could make from it is that it’s probably a group of guys they send in before they send in SWAT I guess. It also only seems to consist of him and his partner Gonzales. As per usual he’s a plain clothes cop meaning he rides around on a motor cycle, chews on a tooth pick all day, wears these uber macho, uber 80’s sunglasses and uses anything but the standard service weapon.

There is a serial killer active in the city and so far the police haven’t got much on him since his targets are seemingly random. Marion asks to be put on the case as he think he might be of some assistance with his theory that there’s not just a serial killer, but a bunch of people doing the killing.

Of course Marion is right.

The Night Slasher, as he’s been named by the press, is a leader of some vague cult who get together in some basement en slam axes against each other. One night when they’re killing some random woman in the middle of the street a young model named Ingrid Knutsen drives past. She’s played by the always badly acting Brigitte Nielsen who was Stallone’s wife at the time. The cult doesn’t seem to be so happy with a witness so they go to great lengths to kill her as quick as possible, but as soon as Marion gets a whiff of why she might be a target he sticks to her like glue and is going to take here to a safe house. But due to a mole in the police department the cult finds out and go after them.

Cobra is Stallone’s version of Dirty Harry: the hard-as-nails cop who has only one answer to crime: violence. Even the marketing department acknowledges this with taglines like “Crime is a disease. Meet the cure.” and “The strong arm of the law”. The poster also has him carrying an automatic weapon, a gun stuffed against his penis and two hand grenades.

Mind you, this is a street cop folks…

Marion is a fascist’s wet dream. He even spouts his frustration against liberals on multiple occasions complaining that he’s doing a good job cleaning the streets but those pesky softy judges letting them constantly go. It’s no surprise that every criminal that comes across Marion ends up dead. The one reporter that actually asks questions gets his face shoved into the remains of one of the victims of a criminal murdered by Marion. Cobra has a message, and it’s a nasty one: in order to stop crime, cops have to be given a license to kill and no questions should be asked… ever.

This message, the gritty tone, the cheap look of the movie, the strange editing, the lack of humor and self reflection make Cobra a picture that feels off. There’s no joy in watching this movie. It’s about a sad title character who’s obviously a closeted homosexual and likes to kill people and gets away with it because it’s his job. If you’re wondering why I come to the conclusion that he’s a closeted homosexual just think about his response when a gorgeous single woman asks the following question:

Ingrid: Do you ever get involved?

Cobretti: With a woman? 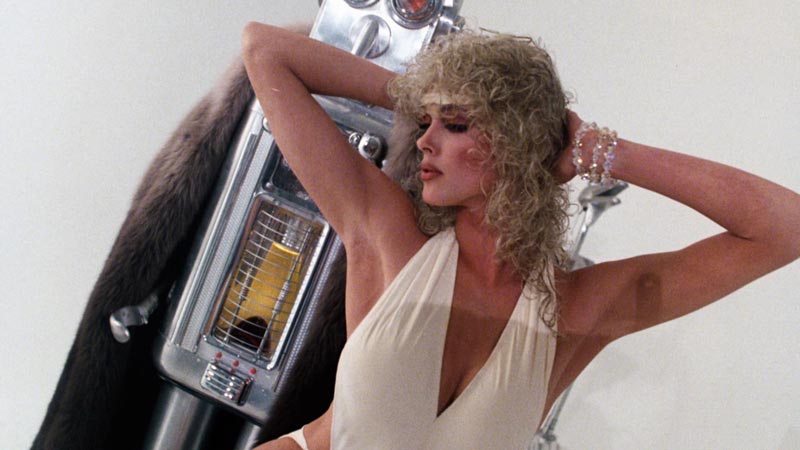 Nielsen has a thing for appearing in movies with goofy robots… remember Rocky IV?

Marion’s answer to everything is violence. Some guy leaves too little parking space: let’s push away his car and tear his shirt apart (again: gay). Your chief is always nagging because he disapproves your methods: punch him in the face. It becomes unrealistic at how much shit people are willing to take from him.

There’s very little quality on display here. Stallone phones this movie in and his supporting cast is bland. Brian Thompson might look the part but I always found him to a boring second-rate Arnold Schwarzenegger. With a more upbeat tone, less political message and some cool post mortem one liners this could have been a fun movie and third franchise for Sly, but as it turns out we should be lucky we didn’t get any sequels.