Child’s Play 3 has gotten a bad rep over the years. It was the movie that killed the franchise until Scream started a horror-revival and we got Bride Of Chucky, it was also falsely reported to have influenced two kids to murder toddler James Bulger in 1993, and it was panned by critics upon its release and is generally known as the weakest entry in the franchise. I on the other hand, have never had it in for this movie. It’s certainly not a masterpiece, but it’s a decent slasher movie. Let’s take a closer look:

Set about 8 years after the events of the second movie, the factory apparently shut down production as the opening scene shows us Chucky’s molten body being dragged away from the facility that is now filled with cog webs.
Apparently the police never gave the crime scene free.
Chucky’s blood ends up in a vat ofliquid rubber which is going to be used to create a new line of Good Guy dolls. Before you can say “Hidey-ho” the soul of Charles Lee Ray once again finds himself in a Good Guy doll and sets out to find good old Andy.

Writer Don Mancini already started working on this movie when the second one was still in production. He stated that when writing it he quickly ran out of ideas. This is evident as Child’s Play 3 feels like copy of the second movie, only set at a different location. Chucky is somehow resurrected, he looks up where Andy lives now, goes to that location, tries to transfer his soul but is constantly interrupted and he kills some people until he finally is destroyed. The only change here is that Chucky realizes that with a new body, he could just as well tell it to a new person. In this case the person is young Tyler who’s living on this Army base because his dad’s in the Army, though he’s overseas for the moment. 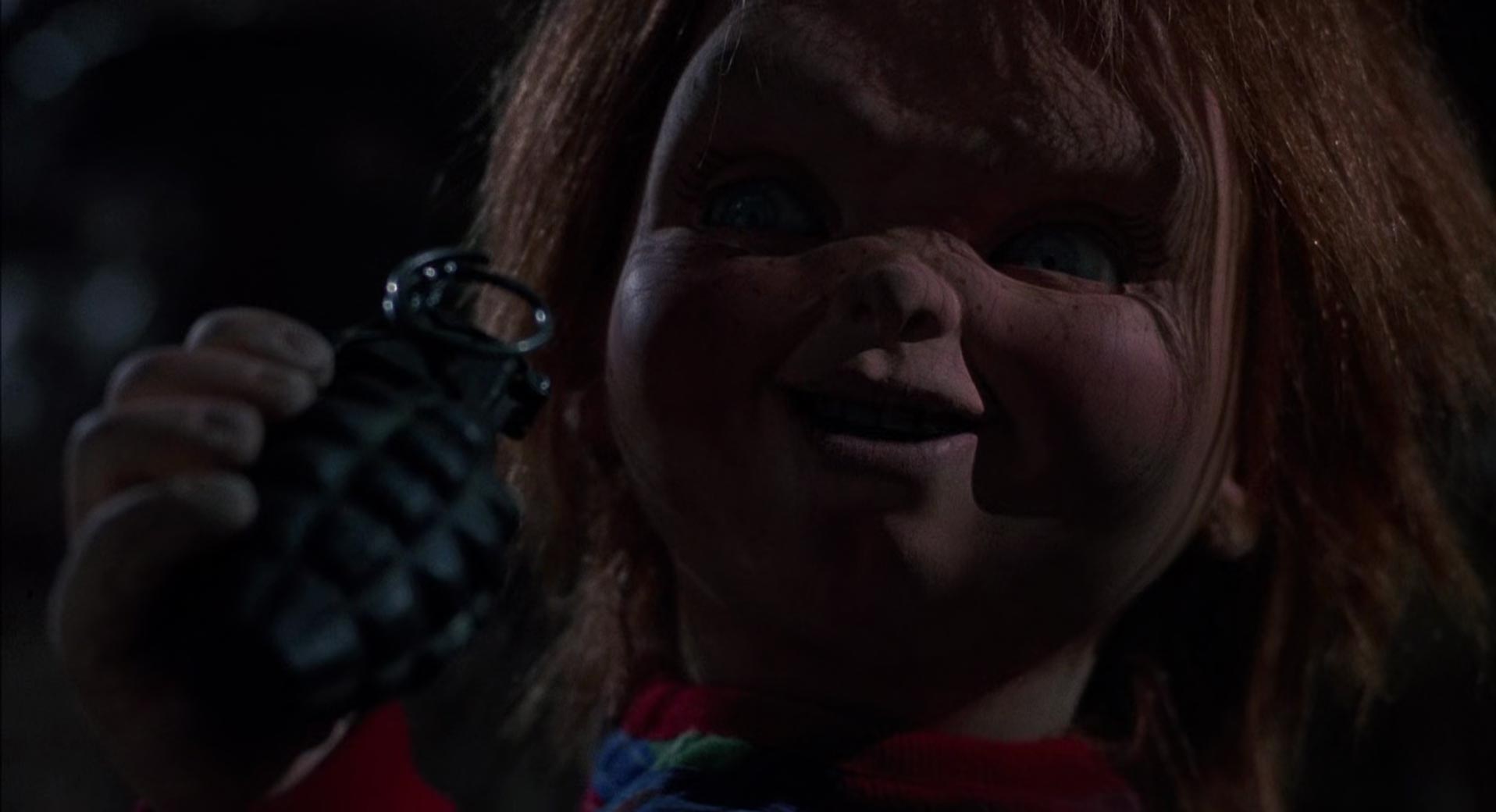 Child’s Play 3 stretches the living doll aspect to a maximum. Though young Tyler might still be years away from being an adult he seems to be around 11-12 years old at least. At that age you should be able to question a talking doll. We never saw Chucky communicate with Andy in the first movie, but we do with Tyler and it makes no sense he so easily accepts the doll is so-called “new and improved”. There’s also a scene later where Andy tries to warn Tyler about Chucky who ignores him, but the reason Tyler has Chucky in the first place was because of the fact he opened a package addressed to Andy. Tyler stole Chucky from Andy and Andy could’ve threatened to go to their superior officers.

There are a lot of goofs or questionable actions like this in the movie. Chucky was the first to come of the assembly line as one employee states, before he gives it to the CEO. When the CEO takes Chucky up to his penthouse there are already two Good Guy dolls in pristine condition there. Since the last one was created 8 years ago, what are they doing in his house? And while I’m on the subject, which CEO of a toy company has all those toys in his house? The CEO of a pharmaceutical company doesn’t have a complete pharmacy at his home, nor does the CEO of a Jack Daniels have dozens of crates filled with whiskey at his home. Or maybe both of them do… I can only imagine the parties going in those residences.

What I find funny is that Child’s Play 3 has some of the most memorable scenes in the series. Everbody always remembers Chucky changing the ammo from blanks to live, and the ending in the haunted house. These scenes have the same impact the factory had in part 2.

Despite going through the same motions as the previous movie I remember this movie fondly because of the same reason I totally love Hellraiser III: one-liners. Of course Chucky has had his fair share in the first two movies, but this movie has some good ones of its own including the legendary “Don’t fuck with the Chuck”. I’m not making this out to be a masterpiece, but when you compare this movie to a lot of other slashers it’s pretty decent. Let’s look at other slasher movies from 1990-1992: Jason Goes To Hell, Freddy’s Dead, Halloween V. Compared to those this movie isn’t all that bad. In the early 90s slashers were wearing out, but still Child’s Play 3 is light years ahead in terms of quality than Halloween V.

So this movie is a mixed bag; on one had there’s an average slasher movie with a cool lead that has become an icon since then. It has its fair share of good scenes, one-liners and novelty deaths. On the other there’s a movie so shortly released after the previous sequel that it feels like a carbon copy, one which provides the audiences with enough moments to question how hard it actually could be to dispose of one doll.