The black remains of melted rubber are being scraped of metal, an eye is removed, teeth are scraped clean. Now only a head, every other missing part is replaced, but when the eyes supposed to be placed in the head the machine malfunctions and releases high doses of electricity in the eye sockets. And like that one of the most notorious slasher icons on the big screen gets a jump start for his first sequel: Chucky.

After than this intriguing opening sequence Chucky wastes no time to complete his mission: find Andy from the previous movie and transfer his soul into his body. Meanwhile Andy is treated as most people are after encountering a supernatural figure, as a traumatized boy with delusions about a killing doll. Since nobody other than Alex Vincent decided to return, Andy is put in foster care and all the other witnesses who saw a living doll are merely mentioned. Mother’s in a loony bin, the police are denying it.
Chucky successfully “infiltrates” the house where Andy lives but has a hard time getting some alone time with him. Meanwhile a lot of people die.

The first thing that I noticed about this movie is how it’s radically different in tone and style compared to the original. I really love the lighting and some of the light effects in this movie. While the first movie was kind of gritty, this movie has more vibrant colors, especially in the factory at the end of the movie which sometimes looks more like an amusement park with all the bright colors. Two scenes in particular stand out: when Chucky has just gained access to the house and he’s standing at the bottom of the stairs. The lightning outside really gives him a creepy and cool presence, another scene I liked was when he was thrown in the basement and he’s lying there on the floor. Dad turns off the light but we still see him due to a beam of moonlight and he gets up again. Great transition and a little touch that shows they really thought about these shots.
One of the reasons the style and tone feel so different is the location. We’ve moved from the foul inner city of Chicago to the suburbs. From skyscrapers and abandoned buildings to a nice house with lots of green surrounding it.

Even the doll has changed somewhat. His eyes are really deep blue and look really sinister. Brad Dourif returns as the voice of Chucky and he really gives the doll character. Though he’s aided by some good animatronics. The fact Chucky is real and not some CG-creation is great. Though he could have been made more realistic with some small CG-touches it’s great to see the doll interact with humans. They also changed his character somewhat. Sure he’s still the violent killer but like most horror icons he has become more chatty and spouts more one-liners. In one scene he flips the bird, which is pure classic. 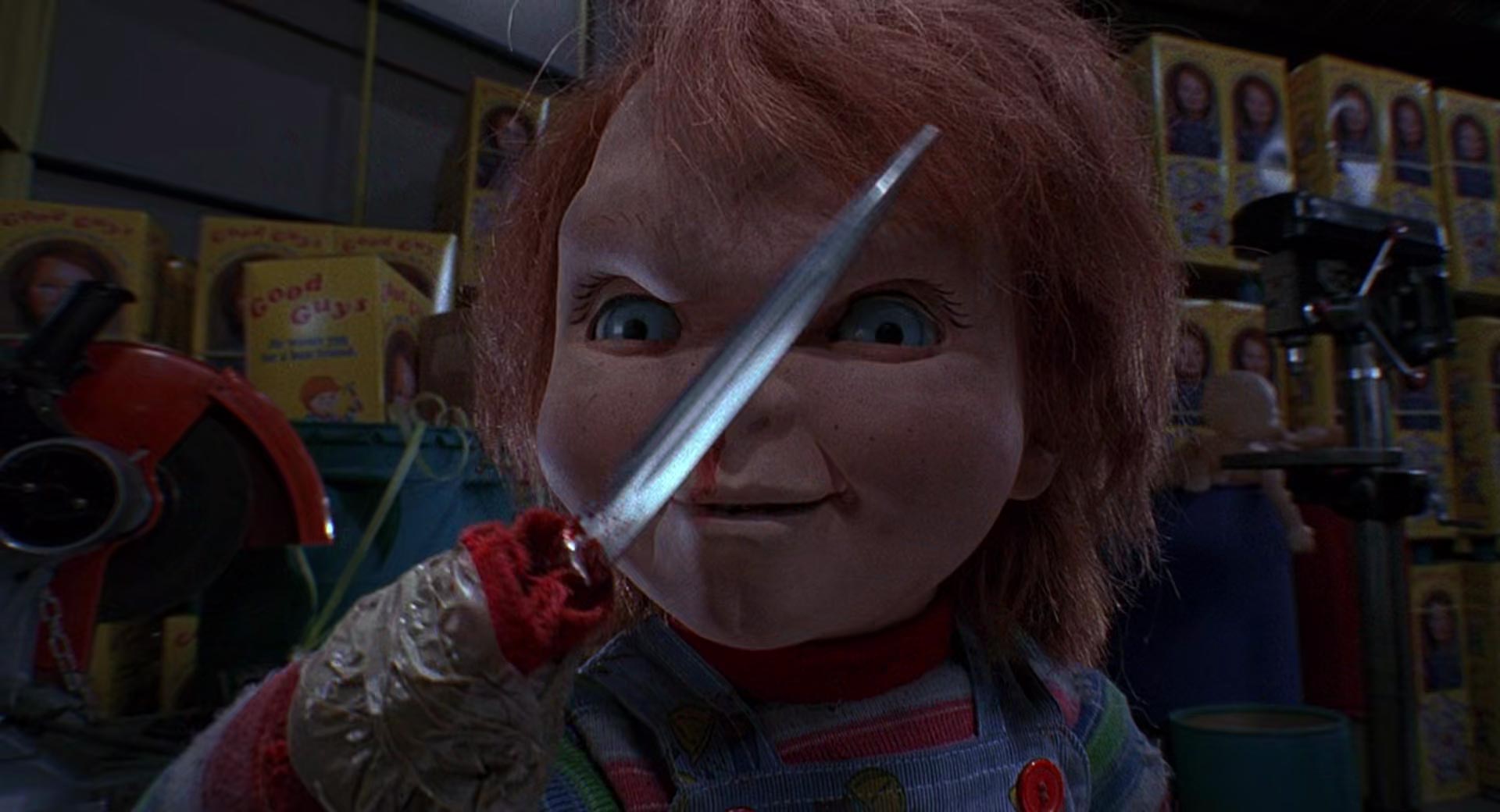 Unfortunately the movie is filled with stupid characters. Chucky has always been a character that one could not take entirely serious. Here’s this 2-3ft tall doll that is able to overpower adults with ease. When they are aware of him they do the stupidest things; The script required Andy and his foster “sister” Kyle to get away from Chucky in the factory but the route they’re taking is just ridiculous. They climb up a machine only to go down again once they’ve reached the top, they need to go over conveyor belts in order to reach an emergency exit. How do the people working in the factory ever get home, especially without injuries? Another strange thing was why the foster family never actually threw the damned doll out. Sure it might have been expensive, but the kid is terrified of it. Somehow they constantly threw it in the basement.

Despite these little remarks I do love this sequel which in my opinion is (almost) as good as the original. Sure, the whole Chucky must transfer his soul routine is repeated here, but with a twist at the end which makes for a good laugh. With a running time of a mere 80 minutes and the fact the whole origin story has been done, this sequel goes into overdrive right from the start. You could also see that had a nice budget which they did not waste on famous actors, but rather on sets and the animatronics of Chucky. The factory might look unrealistic, but its brightly colored paint job and thousands of boxes with Good Guy Dolls make it a really cool setting.

Child’s Play 2 isn’t perfect, far from it, but this is one of those movies that has a special place in my heart. It’s got a cool poster, good cinematography, a classic character in Chucky, good pacing and just enough fresh elements in an otherwise rehashed story to surprise the audience.