Jim is a dorky guy who can’t seem to hold a job. His last chance before his father sends him off to a far away relative to work in a garden shop is a job as a night cleaner at the local Target store. Locked in for the night all by himself he quickly gets bored and starts goofing around the store. He suddenly comes across a girl named Josie who is apparently locked in also. She’s the kid of a wealthy father whom she tries to rebel against. In this case by shoplifting. But she chickened out in the dressing room and missed the store closing. Polar opposites Josie and Jim are now locked in together for the night.

On paper Career Opportunities is a mashup of John Hughes’ The Breakfast Club, Home Alone and Ferris Bueller’s Day Off. A couple of teens getting to know each other over the course of a day, or in this case a night. Throw in a voice-over by the male lead and some burglars and you get a movie that plays like a best of album. But one of those best of albums that only contains alternative mixes of an artist’s most popular songs.

Career Opportunities has all the familiar elements, but they never seem to fit together. Jim and Josie are opposites but the romantic aspect of their night together is never convincing. The addition of the armed robbers during the final act feels contrived. Something that seems to have come from a last minute rewrite. I can just picture Hughes’ screenwriting process:

What have I got so far? A story about two kids who are complete opposites. They’re locked in a huge department store together and during the night they swap personal stories and get to know each other. Hmm, sounds a lot like Breakfast Club. Hey wait a minute! I just had an enormous success with Home Alone last year. You know what? I’ll throw in some burglars here as well. Who will notice? 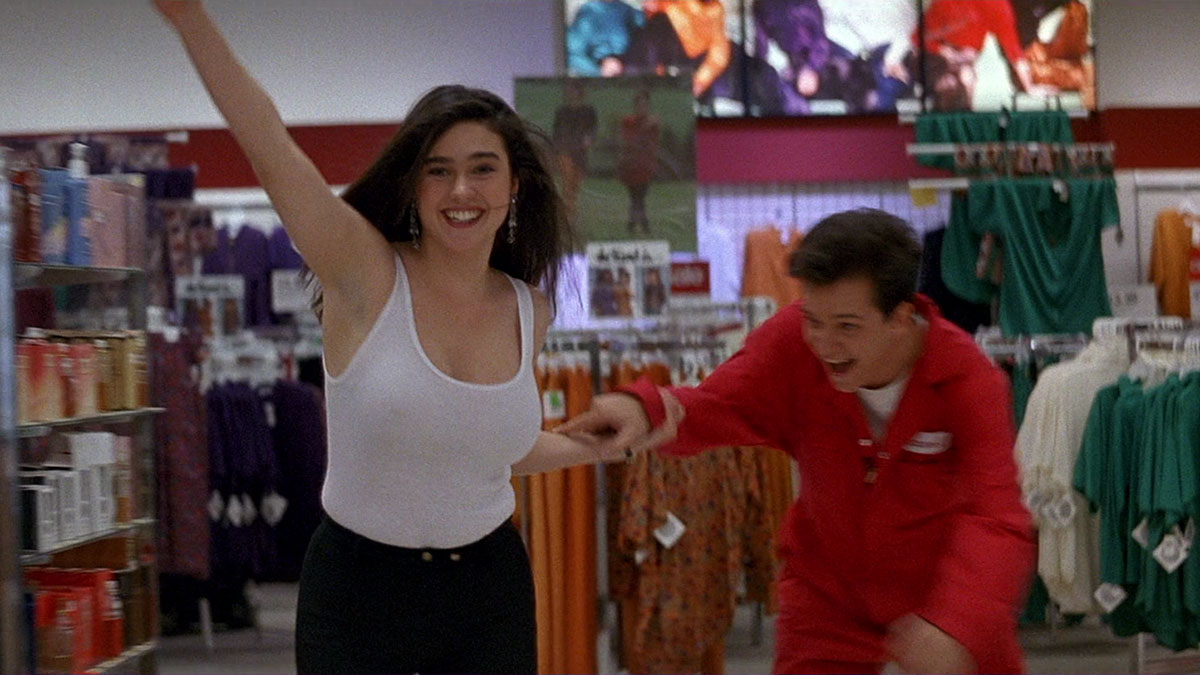 So Career Opportunities actually marks the moment where John Hughes’ scripts starts to wane in quality. Home Alone 2, Dennis the Menace, Curly Sue and Beethoven are just a few titles he wrote after this movie. None of them had the same impact as his best work in the 80s. Sure, movies like Beethoven were successful and got a ton of sequels, but it’s not one of the classic movies you think of when it comes to John Hughes.

So why watch an almost 30 year old movie, if it’s not that good? 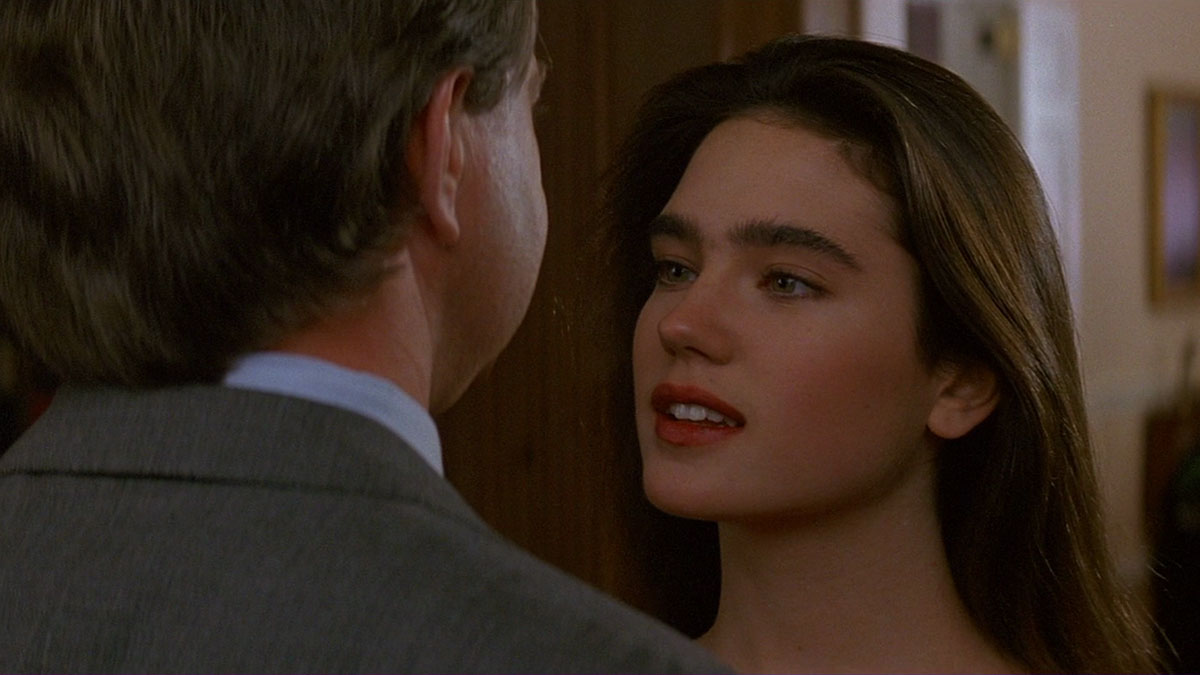 Career Opportunities features her when she was in her prime. The first time we meet her she enters a room and takes her coat off, only to reveal some really tight fitting clothing. She then introduces herself to one of her father’s business partners by kissing him passionately on the mouth. This is her way of rebelling against her father, but it’s also the way the movie sells itself to the audience. Even the movie poster features her cleavage.

Her character is positioned as a sexual vixen throughout the entire movie. Reminiscent of women in a Russ Meyer movie. During the third act she walks around bra-less in a tight white tank top. She is often shot from the side showing of her curves. On occasion even bending over so we get a good look at her cleavage. At least the movie lives up to the poster.

This movie made me remember why I, as a teenage boy, was so fond of Ms. Connelly in the early 90s. Even though I mostly knew her from the family friendly “The Rocketeer”. While not as memorable as Phoebe Cates exiting a pool, the scene of her riding a department store horse has become a bit of a classic as it has been used in memes on the internet. 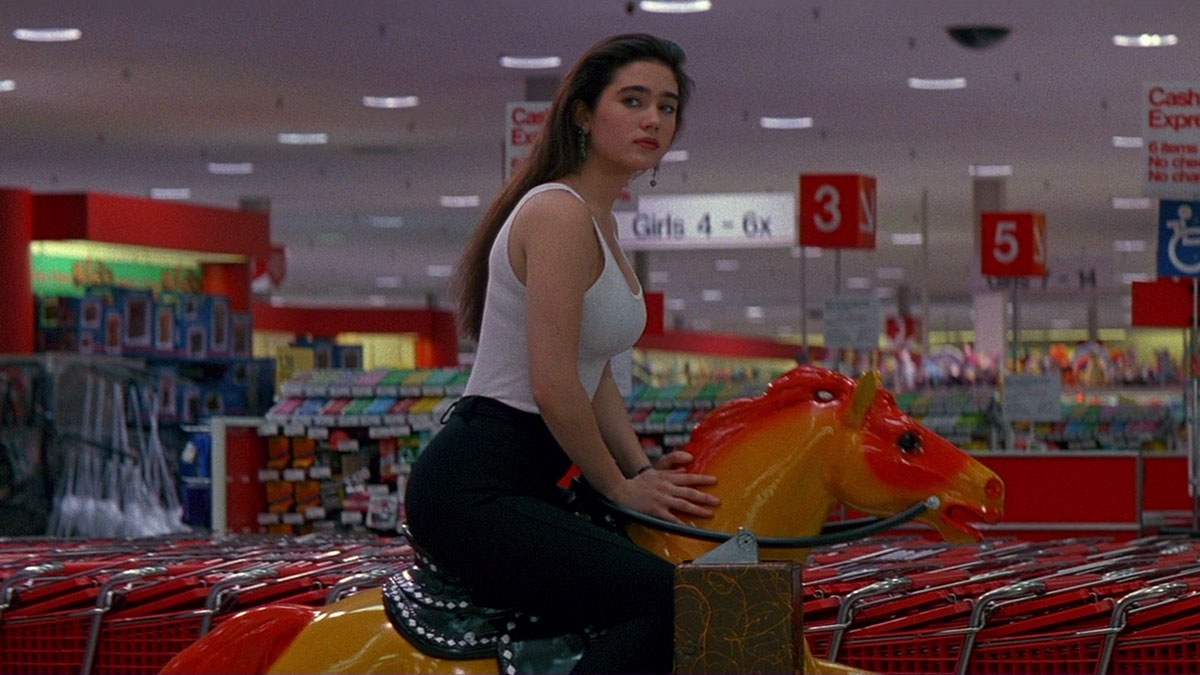 She is the only redeeming factor in this movie, which for a comedy isn’t even very funny. Her co-star Frank Whaley feels like a cheap knock off Matthew Broderick in his role as Ferris Bueller. A copy without the charisma and a decent script. John Candy and William Forsythe pop up each in one scene. But they make more of an impression in mere minutes than Whaley does in 80 minutes.

I would expect his career to have gone downhill after this movie, but he has been working steady for 30 years now. Apparently appearing in this movie was a good career opportunity.