As the old saying goes: Fool me once, shame on you; fool me twice, shame on me. That certainly is the case for Cannonball Run II, the follow up to a race movie of which the large amount of cleavage on display was its most notable aspect. Cannonball Run II is a basic rehash of its predecessor, with a large portion of the cast returning, but with a goofy kidnapping plot thrown in for the sake of variation. The plot is simple: the sheik from the previous movie is considered to be a disgrace to his family due to not winning the Cannonball Run. His solution: organize another so he has new chance to win the race and the approval of his father. But nefarious plans are made as the son of a gangster is in debt for 9 million dollars with another gangster and decides that kidnapping the sheik and holding him for ransom is the quickest solution to all of his problems. Without the sheik there is no prize money, so the Cannonballers have to set aside their differences and work together to save the Sheik.

One of the key features of the Cannonball Run movies is the all-star cast it contains. Both movies, I’m ignoring the third one which was titled Speed Zone, feature a lot of famous performers. This movie has Burt Reynolds, Frank Sinatra, Dom DeLuise, Dean Martin, Sammy Davis Jr., Telly Savalas, Shirley MacLaine, Jackie Chan, Tony Danza and The Dukes of Hazard’s Daisy: Catherine Bach. There are also small parts for well-known character actors like Henry Silva, Abe Vigoda, Alex Rocco and Richard Kiel who we all know as the iconic James Bond villain Jaws.

The actual race makes up only for a small part of the movie, as it takes up to about 45 minutes before the engines are started. Before that all of the characters are set-up even though that is hardly necessary since so many of them are returning characters. Even some of the characters who are new really need no introduction like “Lamborghini Babes” Jill and Marcie. They might be played by newcomers but their characters are the same as the Lamborghini Babes from the previous movie. One of the more prominent missing name on the list is Roger Moore, who spoofed his James Bond persona in the original movie. Still, the James Bond references are on full display here with the casting of Richard Kiel as a sidekick to Jackie Chan and the appearance of a car being able to turn into a submarine. Just like the Lotus Esprit in The Spy Who Loved Me. 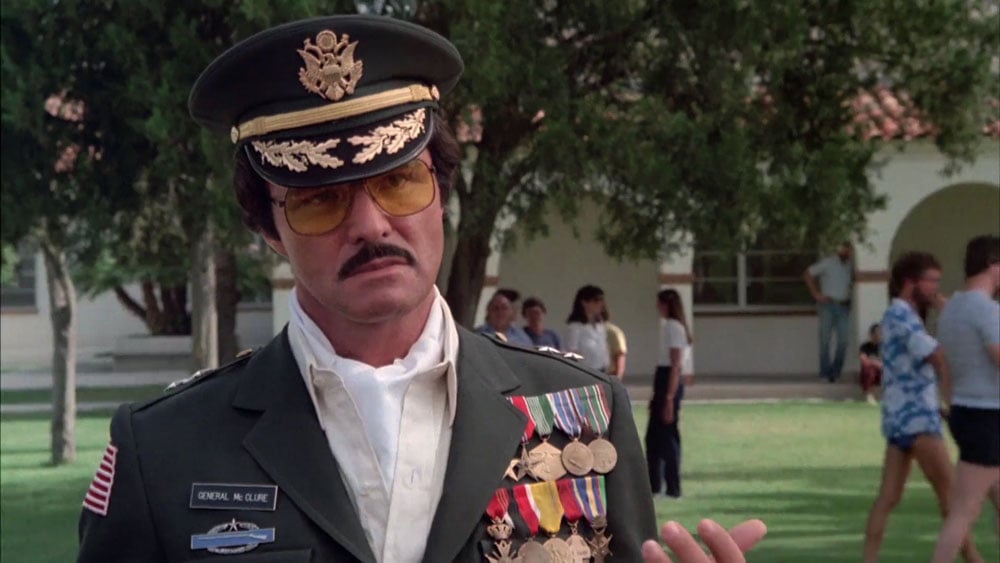 My look when watching this movie

Even though it’s covering the same ground as the previous movie and half the cast do not require an introduction, Cannonball Run II actually has a longer running time than the first movie. The reason behind this is the fact that we are treated to lengthy sketches of the characters we already know especially those revolving around the Lamborghini Babes. How many times do we need to see them outrun and outsmart the police? Apparently as much as possible. Another reason this movie is way too long is due to the sub-plot revolving around the kidnapping of the sheik. The attempts on kidnapping him are pretty funny, sometimes resembling a Looney Tunes cartoon, but after he’s kidnapped the movie suddenly comes to a halt as the Cannonballers have to temporarily stop racing and join forces to save the sheik. This actually takes the pacing out of a movie about racing! It also renders all the racing useless and shifts the movie to a lengthy sequence in which Frank Sinatra has a wasted cameo and we see several of the main male actors dress up as female Arabian dancers. I can assure you that it is every bit as unfunny as it sounds.

The one thing this movie lacked in comparison to its predecessor in my opinion was cleavage. The first one had some busty actresses in big and small roles displaying their assets making the movie more watchable. Even though this movie has women like Marilu Henner and Catherine Bach running around, I found it to be more teasing than pleasing. Especially Bach is wasted in the same jump-suit Adrienne Barbeau filled up so nicely. Bach was pure eye candy in The Dukes Of Hazard making such an impact her shorts are still called Daisy Dukes today. But Bach isn’t as well developed in the chest area as Barbeau and thus putting her in a jump-suit wasn’t the best decision. It would have been better if they had just let her use her Dukes-outfit. It would have been a nice wink as well.

Aside from some gags that did work, Cannonball Run II is more of the same with some extra padding in the form of the kidnapping-subplot. Something which we need as much as we need Chlamydia.