Candyman: Day of the Dead was released in 1999 directly on video four years after the previous movie. In a time when the slasher revival generated by Scream was already coming to an end. The Candyman series never went along the Scream route; incorporating a bit of a tongue-in-cheek tone with a group of teenagers thrown in for good measure. Candyman always kept to its serious self. While that should be applauded, it’s probably also the reason this movie was the last we saw from the Candyman.

Candyman: Day of the Dead follows Caroline McKeever, an artist doing an expose on Daniel Robitaille; The man who would become the Candyman. She wants to restore his name and show the world the talented artist behind the grim urban legend. Her main motivation for doing so is that she’s his great granddaughter. She’s actually the daughter of the protagonist of the previous movie. Her character only appeared in the epilogue. So this movie is actually set in somewhere between 2015 and 2020 since she’s clearly in her early 20s.

So another family member of The Candyman eventually says his name five times after which he appears. He wants her to join him or to trade her life for that of her friends which he butchers one by one. I’m not sure what his agenda was, but it had him jamming his hook through a lot of people and keeping one person hostage so there would be a final showdown in his lair. 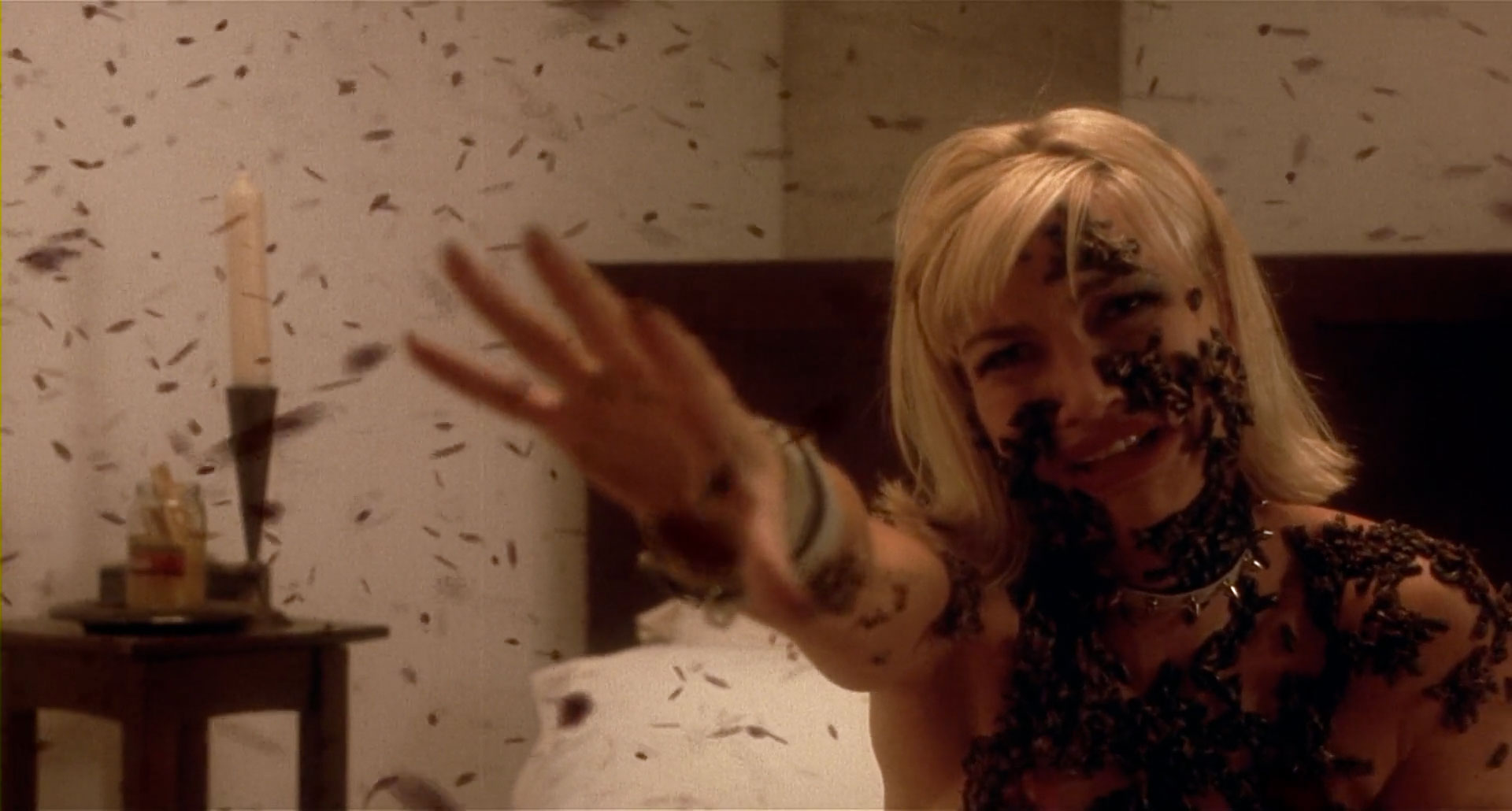 Sound familiar? It should, because you’ve seen this story play out two times before. They basically copied the script from the previous two movies, changed some names and lines and ta-da: a new Candyman movie. The biggest change this time is the shift from black to Mexican culture. And with that come a whole new slew of worn out tropes. Most obvious being that the movie takes place around the Mexican Day Of The Dead. So in the previous movie it was “Mardi Gras”, this time it’s “Day Of The Dead”. You can just see those writers rubbing their hands together: “this stuff writes itself!”

It’s just not the writers. Every department seems to be bent on copying stuff from the first movie. Somehow every Candyman movie needs to have a blonde female protagonist, a Candyman mural, the Candyman having a lair, the Candyman whispering “Be my victim”, cops claiming the protagonist is responsible for the murders that are happening, the state of hypnosis the lead character goes into when he talks to her and even the protagonist calming herself by taking a bath or shower. Just see for yourself, These are three different shots each from one of the three movies: 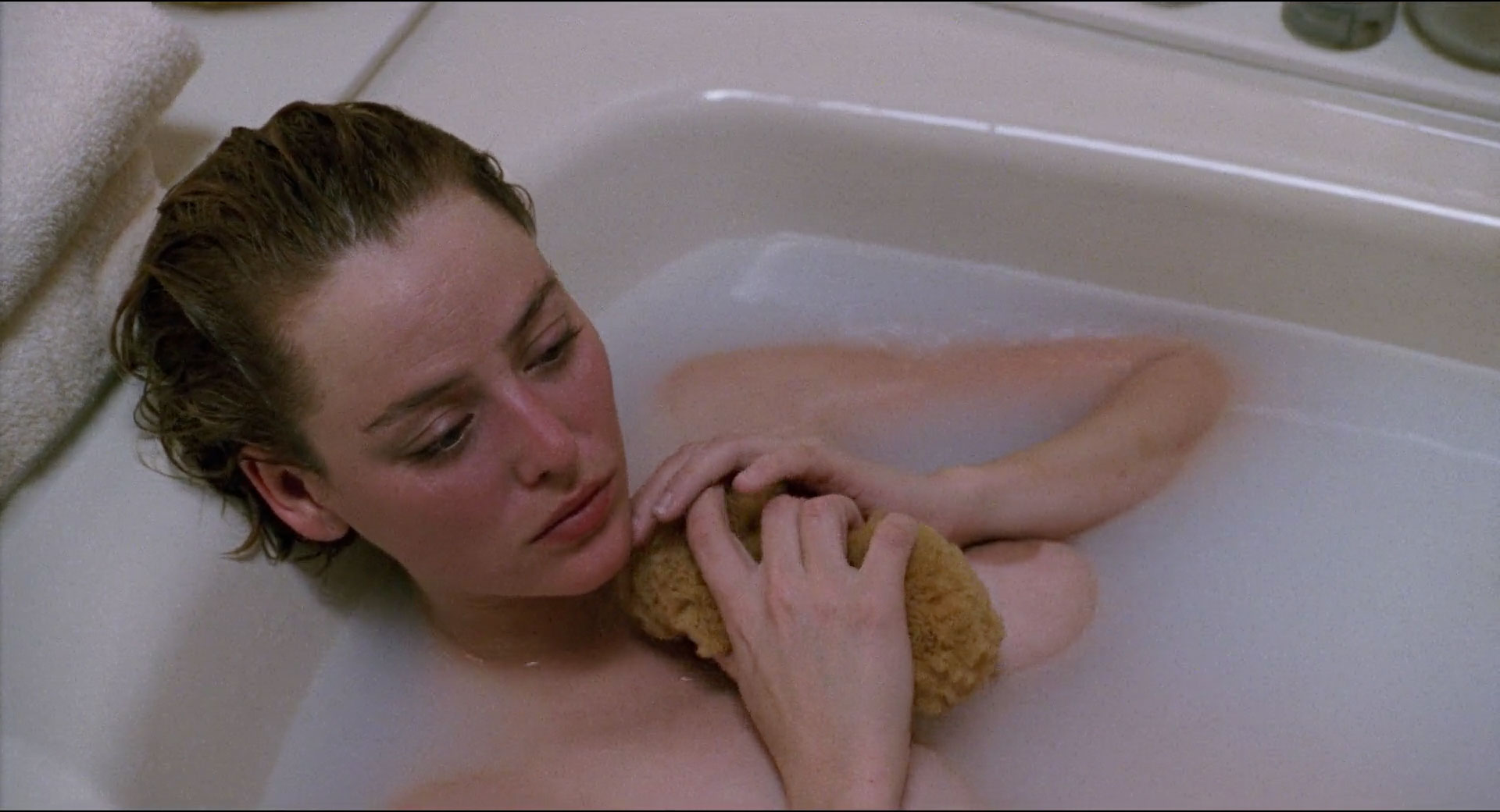 As soon as the Caroline has spoken the name Candyman out loud five times in a row, the same stuff happens again and again. When Candyman burst his hook through a guy in the first movie it was genuinely shocking and a nice scare. Now that we have arrived at the third installment it turns out that’s the only move he has. One of the reasons for the longevity of Freddy and Jason was their inventive kills. The Candyman is like that kid who only knows how to do one special with Mortal Kombat and does it over and over again.

Tony Todd is still imposing as the titular character. His voice is the stuff of nightmares and they give him plenty of voice-over lines again. But his character does come across as being bored a bit. All he gets to do is stand behind some person, whisper a few sentences and then split them from the gullet to the groin. At this point I’m also wondering what it is he does between butchering people. Does he float in limbo until some person says the name Candyman five times out loud in front of a mirror? How often does that happen? At least Freddy has people who dream every night at his disposal. 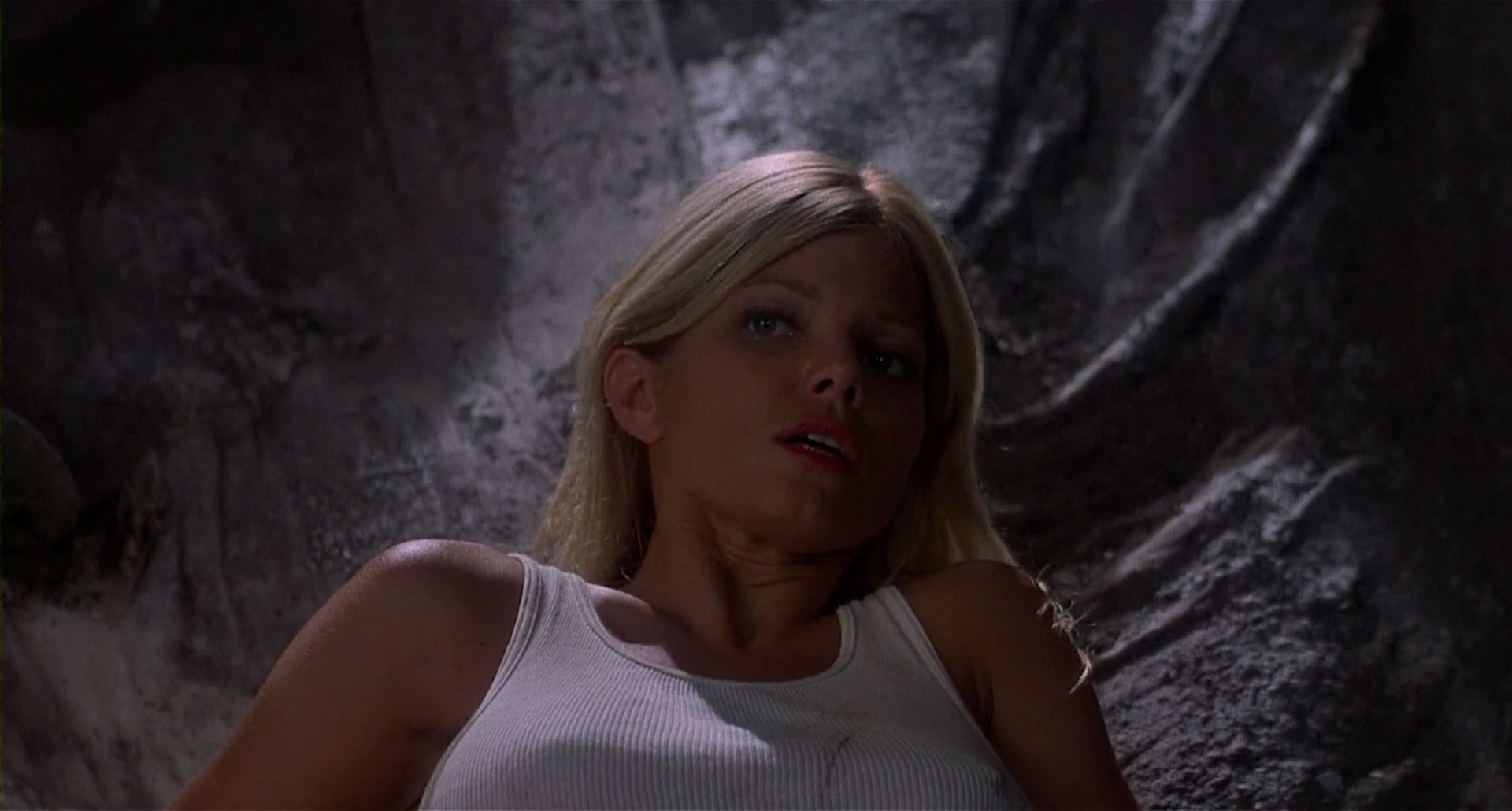 The character of Caroline is played by Baywatch actress Donna D’Errico. The most memorable aspect she brings to this role is her reluctance to wearing a bra. She just lets those puppies hang free beneath her tight tops and shirts. In a movie that already has an obvious low budget, her perky breasts bungling under her shirt in most of the scenes give the movie a bit of an exploitation feel.

I might sound harsh, but it’s not all bad. It’s still watchable. Recycling the first two movies prevented them from probably making a truly terrible movie. But it is just another step down from the great first movie and mediocre sequel. Candyman: Day of the Dead brings nothing new to the Candyman mythology, aside from a new way to stop the Candyman from killing. And it’s even goofier then in the previous movie, in which breaking a mirror was all that was needed to destroy the Candyman.

But let’s face it. After reading my review I’m probably telling you nothing you didn’t expect when you looked at the cast-list and saw that a Baywatch star was the lead actress in this movie. When has a movie that starred a Baywatch actress actually been any good?

To be completely honest. After watching Candyman: Day of the Dead I went to the bathroom, I looked into the mirror and said Donna D’Errico’s name five times. Hoping she’ll appear behind me, breathing down my neck. A man can hope right?

Candyman: Day of the Dead