Brainscan: the ultimate experience in interactive terror. A game that will “satisfy your sickest fantasies” and is “not for the squeamish.” With a description like this one would expect the main villain of this movie to be a little more scarier than the Trickster we get served. He looks like an 80s rockstar with a heroine addiction, sporting a wild red hairdo, long coat and even longer fingernails. His task is to “guide”, and I use that in the widest sense of the word, people through this “Interactive Video Game”. The kid playing is Michael, played by Edward Furlong from Terminator 2, who’s alone since his mother died and his father is on the road a lot, is a horror freak and has a thing for next door neighbor Kimberly whom he spies on from his bedroom. The goal of the game: kill someone without leaving any evidence. To make matters even worse for the player of Brainscan, after successfully killing someone it turns out that the guy he killed in the game has been killed for real. Enter Trickster who tells him he must continue playing or else he will get caught by the police.

Nowadays, with games like Grand Theft Auto around, this isn’t a shocking goal for a game, but in 1994 things were kind of different. Mortal Kombat created a controversy with it’s brutal depositions of decapitations and what not, a few year later Carmageddon would cause the same commotion. In the 90s video games were not only the next big thing for movie makers to use as a theme for movies, they also didn’t understood them enough which is why basically all the movies with a video game theme suck.

Compared to other movies who use a cyber-scene/video-game setting like The Lawnmowerman and The Wizard, Brainscan is a relatively decent movie, but as with all movies dealing with video games and/or hackers it really goes beyond the point of disbelief. Not only is the whole interactive game taken way too far, they also made choices to Michael’s way of life that really detach it from reality. Here’s a 14 year old kid living in a big house alone because his mom is dead and his dad is always on business, he lives in the attic and has all the latest state of the art technology as his hands, including a Siri-like service on his computer named Igor who is voice controlled and can take/hold/make calls and look things up for him. These touches serve no other function to the plot, so why put them in? 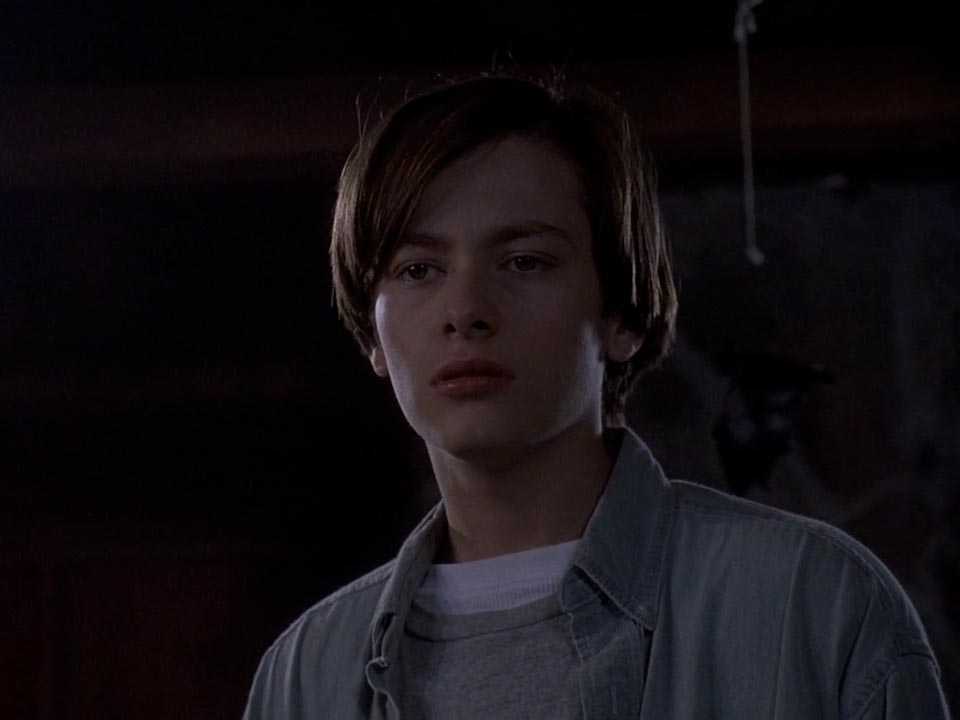 Brainscan is a movie that’s a bit schizophrenic. It serves us the character of the Trickster, which is supposed to be the villain of the movie, but somehow he’s not really a villain. All he does is convince Michael to play the next disc of Brainscan, thus getting him further and further in trouble. But he never seems to be a threat, in fact he reminded me of the average Jim Carrey character. So if the danger isn’t Trickster, then what is? The answer to that is the video game. Every time Michael enters the latest installment of Brainscan he ends up having killed another person instead of just taking care of evidence that could point to him. But if the events in Brainscan happen in real life, why go into Brainscan at all? It’s not as if he has special powers in the game. The only reason he goes into the game is because else they wouldn’t have a gimmick in the plot.

The fun in Brainscan is nowadays a bit nostalgic; The way they depict interactive gaming, the fact that Trickster is so meant to be the next-gen Freddy Krueger (and fails at it), Edward Furlong acting even worse than in T2, the simple cg-effects etc. The movie is very light hearted and while labeled as a horror is more of a thriller. I would even go as far as to describe it as “Total Recall for slasher buffs” with its “is it real or just a game?” thing going on.

What also adds to the nostalgia is the throwaway nudity in the movie. Nowadays everything is nice and clean, rated PG-13. The first shot we get from the romantic interest for Michael, Kimberly, is her putting on bras in front of a mirror in her bedroom with the curtains wide open. This is also stylistically an interesting choice; normally horror movies first set up characters as sexy, then reward the (male) audience later on by showing nudity. Most of the times these characters don’t make it to the end of the movie so by having this character be nude before she even had one word of dialogue the movie plays with that rule.
Kimberly’s character is very much sexualized as she’s always wearing a short skirt and sleeps in her bra with a shirt just unbuttoned enough.

There’s one aspect in the script that makes this movie smarter and it’s the self-reflection on the genre by inserting Fangoria magazine and having Michael be the head of a horror club at school. When the watching a slasher with some fellow students in class the principal walks in and stops it. When asked what the movie’s title was Michael responds “Death, Death, Death”, he pauses and then says “part 2”. A little nod I could appreciate very much.

Brainscan is a fun little movie, but mostly because of its nostalgia. This is not a great scripted movie, it hasn’t got a really engaging plot, there are no memorable characters here, not even the Trickster. A general movie rule is “Each film is only as good as its villain” and Trickster is as imposing as those Goombas in Super Mario Bros. It’s no wonder there was no sequel because for the Trickster it was “Game Over”