Probably knowing this franchise was going for the long run the second movie in the Batman series is titled Batman Returns instead of simply “Batman 2”. It couldn’t have been a more suiting title as Batman indeed returns, though one might wonder if he was ever gone. Joining him are a bunch of new characters created to make his life and that of the citizens of Gotham miserable. Rather than dealing with one crime boss and his goons he has to take on a corrupt businessman, a man-bird mutation and a mysterious lady who dresses herself like a cat in a skin-tight outfit.

In Batman Returns a rumored penguin creature (Danny DeVito) living in the sewer joins forces with Max Shreck (Christopher Walken) in order to take control over Gotham City. The creature, who’s birth name is Oswald Cobblepott, is running for mayor with the intent to get rid of the crime wave plaguing Gotham City. Responsible for this crime wave is the Red Triangle Circus Gang which is actually run by Oswald: That sneaky bastard.
Shreck‘s intentions of replacing the mayor are driven by his goal to build a power plant which doesn’t supply energy to Gotham but rather takes it. A bit of a strange plan if you’d ask me. His mousy secretary Selina Kyle (Michelle Pfeiffer) finds out about these plans and is subsequently thrown out of Shreck‘s office window. Normally a fall from this height would kill someone, but Selina is brought back to life by a bunch of cats and becomes… you guessed it: Catwoman.

And if this sounds goofy, wait until you see an army of penguins walking around through Gotham with a rocket strapped to their backs.

In Batman Returns director Tim Burton got a carte blanche and went with it. The result is a movie that takes places almost exclusively at night and a Gotham City that is actually brighter in colors now but also filled with art deco statues everywhere. Quite literally everywhere as they’re even present in alleyways. This movie has a better atmosphere and set design than it predecessor. It looks absolutely great and it’s a shame they actually wanted a more lighter movie with the next one. We all know that resulted in the neon travesty of Batman Forever. 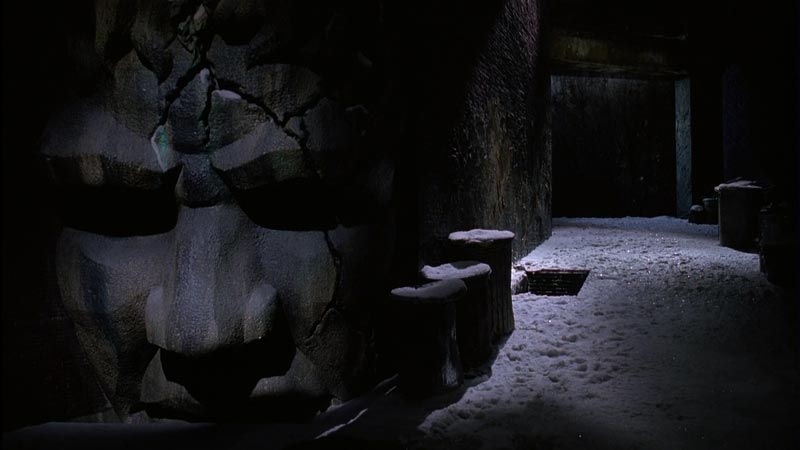 A perfectly normal place to put a giant face statue

The 90’s Batman movies were never really about Batman, he was just a 2-dimensional character put in the movie to have a protagonist. These movies were about their villains and this was the first movie to start the trend of having multiple villains: Penguin and Catwoman. The only other Batman movie to date to feature only one villain front and center is The Dark Knight and debatably its follow up The Dark Knight Rises which centered around Bane 90% of the villain’s time. I never really liked the Joker in Batman and found Catwoman and The Penguin to be far more engaging villains. Danny DeVito gives a Shakespearean performance while Pfeiffer has fun with her character and hams it up, much to my delight. As an added bonus we get Christopher Walken doing his best Christopher Walken. That guy is pure gold in everything, as he is here. His Max Shreck might be a normal human being without any combat skills, but Walken’s performance is so deliciously sleazy he’s a force of his own.

Like the previous movie Batman Returns is nothing like the comic books. The character of Batman remains a mystery to us and apparently has no problem with setting thugs on fire and letting them burn to death. When we first see Bruce Wayne he’s pondering in his study as if the only task in his life he has is waiting for the Bat-signal to be turned on. Aside from a business meeting with Shreck and a date with Selina, Bruce Wayne is hardly in the movie.

Batman Returns also started the standalone concept of the the four movies. Each movie completely stands on its own without hardly any ties to the previous movies. Only Bruce’s lover interest, Vicky Vale, from the previous movie is mentioned twice but other than that only Alfred and Gordon return. Alexander Knox, Jack Napier/Joker (who is deceased) and Harvey Dent are nowhere to be seen or even mentioned. The final shot of Batman Returns consist out of Catwoman looking up at the Bat-signal in the sky. While clearly alive this is the only movie she shows up in despite two sequels following this movie.

One of my major remarks about the previous movie was it’s incoherent plot and The Joker’s schemes which hardly made sense. While Batman returns has a better villain’s plot there’s still a lot of goofy stuff going on like the Red Triangle Circus Gang stealing all the first born sons of Gotham with a train-like car. Really? Nobody is at home? Nobody calls the police? Also the aforementioned trained penguins with rockets tied to their backs is a fine example of stuff people actually came up with and decided that this movie would not be complete without a rocket wearing penguin army.

I didn’t mind these goofy choices as much as I did with Batman. The movie is coherent enough for the majority of its running time and is much more fun. Come on, who doesn’t love the Duck-mobile?
Burton really pushes the PG-rating as Batman Returns is a pretty violent picture with scary clowns, guys with skull-masks and The Penguin himself who’s more grotesque than the rather suave Joker. Then there’s never ending sexual innuendos The Penguin makes. Living 33 years in a sewer will do that to a man. Catwoman might not be as scary, but her role is to titillate the male audience which she absolutely does. 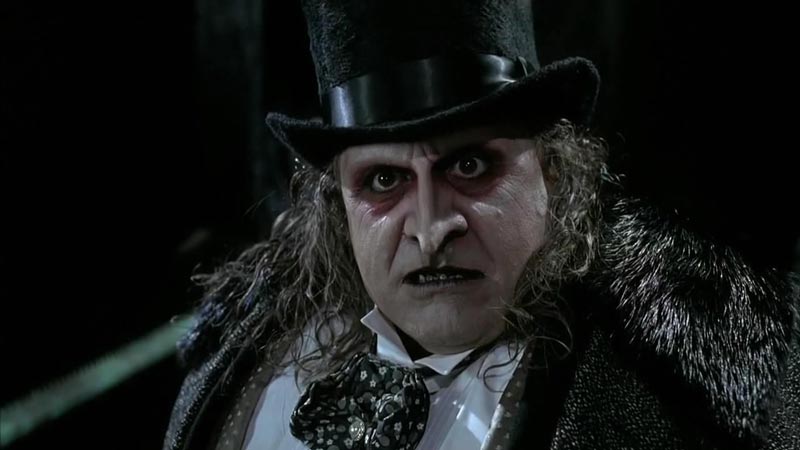 A face not even a mother can love

Batman Returns is one of those few summer blockbusters that has a Christmas setting. Like Die Hard and Gremlins it’s a movie released during the summer only to feature Christmas ornaments and music. Speaking of music: Danny Elfman returns to bring another gothic soundtrack full of strings, horns and choir vocals. It’s very suitable though his Christmas inspired tune might fit the movie perfectly, listening to it while the sun is shining outside is a bit weird. But such is the case with movies released in a totally different season than the one depicted.

Of the four Batman movies released during the the 1989-1997 period Batman Returns has always been my favorite. Somehow this movie, with all of its goofy elements, pushes the right buttons creating a fantasy filled comic book movie full of colorful characters and a terrific atmosphere.