Summed up into one rhetorical question Batman Forever could be best described as “What were they thinking?” After the violent, dark and apparently disappointing box-office returns of Batman Returns the people of Warner Brothers decided that the Batman franchise needed to become more family friendly. But how do you achieve such a thing when the subject matter is a guy dressed up as a bat who’s fighting nasty criminals at night? The answer: a lot of neon, black light and fluorescent objects as well a cartoonish villains who seem to be have taken straight from a Saturday morning cartoon directed by an openly gay director who loves muscular men in tight outfits so much he has added nipples to the suits and included crotch and butt shots. The result: a gay schlock fest and one of the most disappointing sequels of all time only to be surpassed by its own sequel two years later in which they even went further.

In Batman Forever Two-Face is terrorizing Gotham City. The former district attorney was played by the black Billy Dee Williams in Batman, but due to a well thrown jar of acid by gangster Maroni, his face now looks like 50% Tommy Lee Jones and 50% dried out tomato. He blames Batman for this since he was in the courtroom when it happened and couldn’t prevent it. Yes, there was a guy dressed up as a bat sitting in a courtroom in Gotham City. To kill Batman has become Two-Face’s goal in life.
Meanwhile at Wayne Enterprises scrawny employee Edward Nygma (Jim Carrey) is working on a gadget that can turn people’s thoughts into holograms. He offers this technology to Bruce during one of his rare outings as the owner of a billion dollar company, but he has some ethical questions about being able to read people’s minds. Nygma flips, kills his supervisor and starts a vendetta against Bruce Wayne by giving him riddles, teaming up with Two-Face for further funding of his research and donning himself The Riddler. Together they create a way to read the minds of the people of Gotham hoping to find out the true identity of Batman.

When this movie came out I was really excited to see it. The original Batman was good and Returns even better, so I couldn’t wait to see what the third Batman would bring. It even had The Riddler in it, which was always one of my favorite Batman villains. But sadly this movie is a major disappointment in almost every department. The design and look of the movie is mostly to blame for it, but this movie has so many other problems.

If you would take out the character of Two-Face it wouldn’t matter to the plot. The character’s only purpose to the story is to provide Nygma with enough money to create a consumer product that will allow him to read the minds of everyone in Gotham. Made today they could replace Two-Face with a kickstarter campaign.
He’s played by Tommy Lee Jones, an actor mostly known for his serious roles though he did once play an over-the-top villain in Under Siege. Here he gives the same performance but now as if he’s on speed. Damn that guy is annoying.
Not helping is that his co-star is Jim Carrey, extremely popular at the time, but not known for his refined performances. The villains in Batman Returns complemented each other; the zany, loud Shakespearean performance by DeVito and the more subdued scene-chewing by Pfeiffer. Here Jones and Carrey are competing to who can overact the loudest. It’s like watching a shouting contest; Whoever wins, we lose.

Once again almost all ties are severed with the previous movies save for one remark by psychologist Dr. Chase Meridian (Nicole Kidman) about Batman having a thing for skin-tight leather and a whip. An obvious reference to Catwoman who, despite her surviving the previous movie, is totally absent. Chase is a woman with a thing for Batman as she calls him out with the Bat-signal in hopes to seduce him when he shows up. Given that Chase is played by Nicole Kidman before the botox it should come as no surprise that he loves to be seduced by her, though he plays hard to get. Then again, that might also be caused by Bruce Wayne’s closeted homosexuality.

It has always been a more controversial theme about Batman and director of the previous movies, Tim Burton, stayed away from it by not having Robin in his movies as well as having Batman actually have sex with the female love interests. He banged Vicky Vale and was about to hit a home-run with Selina Kyle until they found out about their alter egos. In the hands of Joel Schumacher we get another Batman/Bruce Wayne. Not the violent one Burton presented, but a more softer person who goes to a psychiatrist to talk about his past. This is actually the only one of the 90’s Batman movies to delve deeper into the psyche of Bruce Wayne making him more than just the 2-dimensional protagonist who has to save Gotham from villains who have been given extensive depth, origin stories and what not. This is also a Batman that takes in a young (supposedly 18 year old) attractive young man who recently became an orphan and who has nipples and a codpiece on his Bat-suit. Alfred refers to Dick Grayson constantly as master Dick, which is hard to listen to without grinning. Gotham city was already filled with statues in Batman returns, but in Batman Forever all of these statues are naked muscular men.

The homosexual undertones are carried through in what is probably the most obvious way to distinct this movie from the Tim Burton ones: The overall design.

Batman Forever had to be a more lighter movie, not only in terms of material but also in design. Since a movie set in daylight wouldn’t work with this character they had to think of a way to create a more colorful picture. The solution was found in neon, black light and fluorescent paint. Every scene is filled with bright colors. Gotham City now looks more like Neo Tokyo with a bright red glow over it. Every wall in an alley has brightly colored murals, every indoor location a variety of intense colored light. At one point Dick Grayson/Robin gets in a fight with a street gang. All of them are covered in fluorescent face paint as well as all of their weapons. Even the villains have been given bright surreal colors in their design. The Riddler sports a bright pink hairdo in several scenes and Two-Face’s scarred half of his face is purple colored, because that’s how acid works. Compared to the bleak design of The Penguin in Batman Returns, these villains look like leftovers from the 1990 Dick Tracy movie. 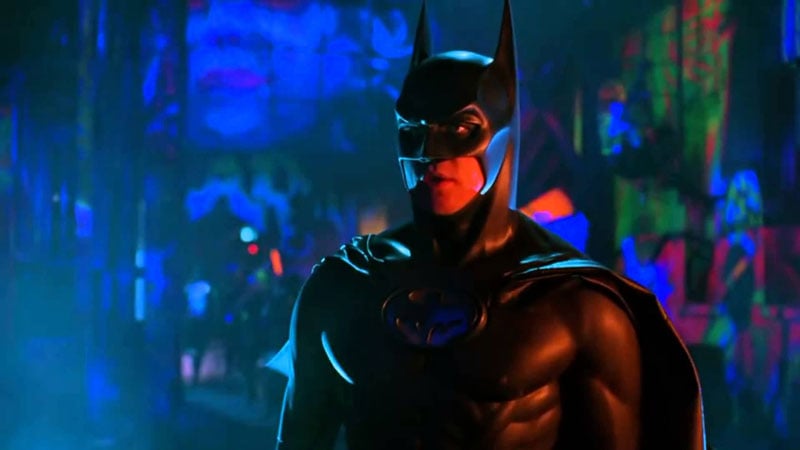 Bright colors and bat nipples. The whole movie look like it was shot in a gay disco.

At the center of the movie there is something that should be reminiscent of a plot, but it’s not that interesting: Two-Face wants to kill Batman, Riddler wants to kill Bruce Wayne, Robin wants to kill Two-Face, Chase first wants to screw Batman but changes her mind and wants to screw Bruce Wayne, Batman/Bruce Wayne wants to screw Chase but then chooses a teenage boy to be his housemate. The Riddler’s plan is the one with the most complex execution thus being the one with the biggest plot-holes: He sends all kinds of riddles to Bruce Wayne even before he’s in cahoots with Two-Face and in the finale these riddles together spell out the secret identity of The Riddler and therefor his location so Bruce can find him to save the loved ones he and Two-Face kidnapped. How is this even possible to plan? There’s also another problem with this scenario: once both Two-Face and Riddler find out Bruce and Batman are one and the same, they surprise him and knock him out cold. Instead of killing him like they’ve been wanting to do the last 90 minutes or so they leave him with the riddles. Most stupid villains ever.

Aside from ranting fanboys the greatest legacy this movie has are the hit songs that accompanied it: U2’s Hold Me, Thrill Me, Kiss Me, Kill Me and smash hit Kiss From A Rose by Seal. They didn’t find a way to sneak it into the movie so they’re just featured during the end credits, but these videos were constantly on the music video channels and have been forever linked with the movie.

Batman Forever is not the worst Batman movie, but it’s still pretty awful. It’s watchable but also full of cringe-worthy moments and clearly more aimed at kids than the Burton Batman movies. There are only a few redeemable elements and clearly marks the moment that the series went downhill.