One of the most memorable and defining scenes in Back To The Future is one that doesn’t come to people’s minds first thing. Marty has just hid his DeLorean Time Machine behind a billboard and walks into town. As he enters the town square Mr. Sandman is playing while he marvels at an era where he wasn’t even born yet. While his first encounter with life moments earlier was a bit silly, him walking through this scenery full of details talks to one of our strongest emotions; nostalgia. Watching the movie now it even works on two levels; the 80s and the 50s. The DeLorean has become an iconic vehicle due to this movie, and Nike just released a very limited version of the shoe that was shown in the sequel. 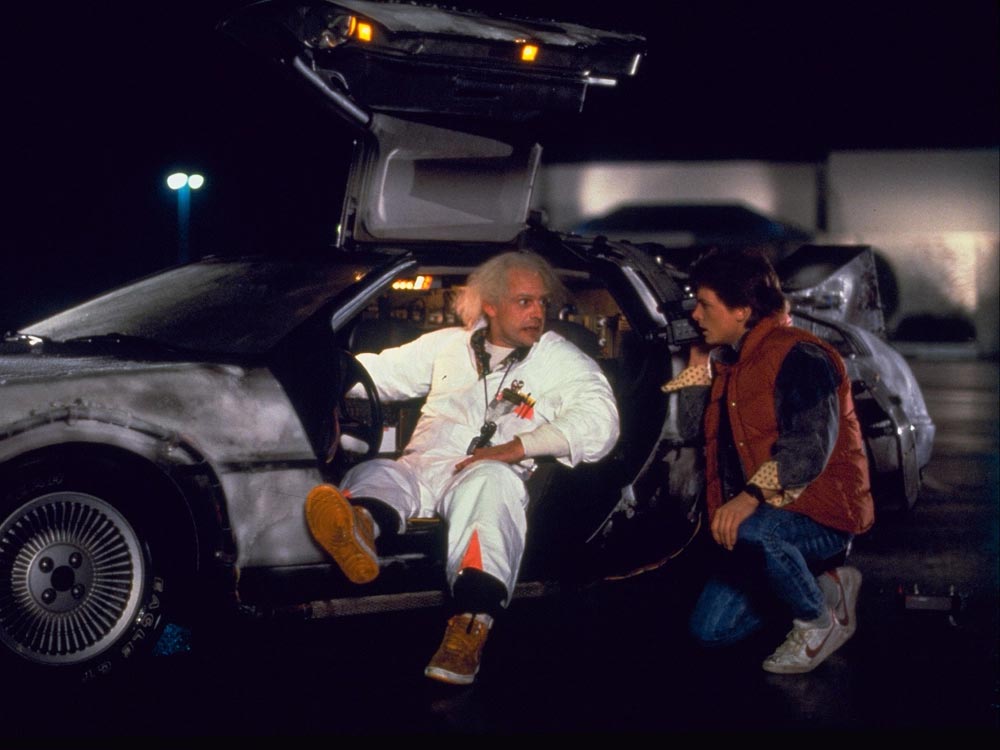 The movie is about a teenager called Marty McFly who’s friends with scientist Doc Emmett Brown and who has just invented a time machine that runs on Plutonium. Due to circumstances he ends up in 1955 without any Plutonium, thus without a way back to the future. He looks up the 1955 Doc Brown for help but didn’t realize that him being there could change history, even his own as he unknowingly disturbs the moment his parents were to meet for the first time. Not only does he need to go back in time, he also needs to let his parents fall in love again which can be pretty difficult if your father is an enormous geek and your mother has the hots for you.

This movie works on basically all levels. The casting is great and every actor owns the role they’re playing even though in a lesser movie these characters would come off as annoying in terms of overacting. Michael J. Fox as Marty plays it relatively straight but he’s surrounded by Crispin Glover, Thomas F. Wilson and Christopher Lloyd. They all ham it up to eleven and get away with it crispy clean in the process which is saying something.

A lot of movies I loved back in the day don’t hold up so well now, but somehow in his role as producer Steven Spielberg was responsible for a trilogy of movies that not only are fun to watch today but will probably be just as much fun 10 or 20 years from now. I’m talking about Gremlins, The Goonies and of course Back To The Future.

Back To The Future is one those examples of near-perfect movie making. It has a good script, a cast that has much fun in their roles, convincing special effects and is just plain to watch and to re-watch because that’s what gives this movie just that little bit of extra. There are tons of (in) jokes viewers might miss on the first viewing. Having watched this movie with someone who saw it for the first time last night she missed several gags like the twin/lone pine situation. It’s that level of attention to detail that just elevates this movie. The movie even uses product placement in a way it’s actually fun, something they would continue in the sequels.

I simply love this movie and have absolutely nothing bad to say about it. It’s funny, exciting, looks great and has some great nostalgic value. It’s a movie for everyone any time.

Back To The Future