Avengers: Infinity War marks the ten year anniversary of the Marvel Cinematic Universe. A shared universe that started with 2008’s Iron Man and later that year The Incredible Hulk. This is the 19th movie in this universe and for now this is the moment all the previous movies have been working to. Thanos, who was mentioned by name a couple of times in other movies as well as appearing in a post-credit scene of the Avengers finally takes the center stage.

His plan is rather simple as it can be summed up in two sentences: He is looking for the six Infinity Stones because they give a person the power of a God. He wants to use this power to wipe out half the population in the entire galaxy to restore order. Apparently over-population is not just exclusive to Earth. The only people who can stop him are the characters of all the previous M.C.U. movies. Iron Man, Thor, Captain America, Black Panther and Spider-man to name a few.

The previous Avengers movies have proven that ensemble movies can work. The disappointing output by Warner and DC however also proves that in order for ensemble movies to work the characters need to have their own movie first to establish them. Marvel understands this, but Avengers: Infinity War is their most ambitious ensemble movie yet. According to people who have been keeping track there are around 28 heroes in this movie.

With 28 central characters it’s hard to give each character enough screen time and/or development. Luckily all the central characters are already established in the previous 18 movies.  This is however the weakest aspect of Avengers: Infinity War: this is not a standalone movie. If you have never watched an M.C.U. movie, you can’t just walk in and understand who the characters are or what’s even going on. The movie’s target audience are the people who have avidly watched all the previous movies. It’s like those Transformer Combiner toys. If you have all five you can combine them to create another Transformer. It’s the same here: watch the 18 preceding movies and you will fully understand this latest Avengers movie. 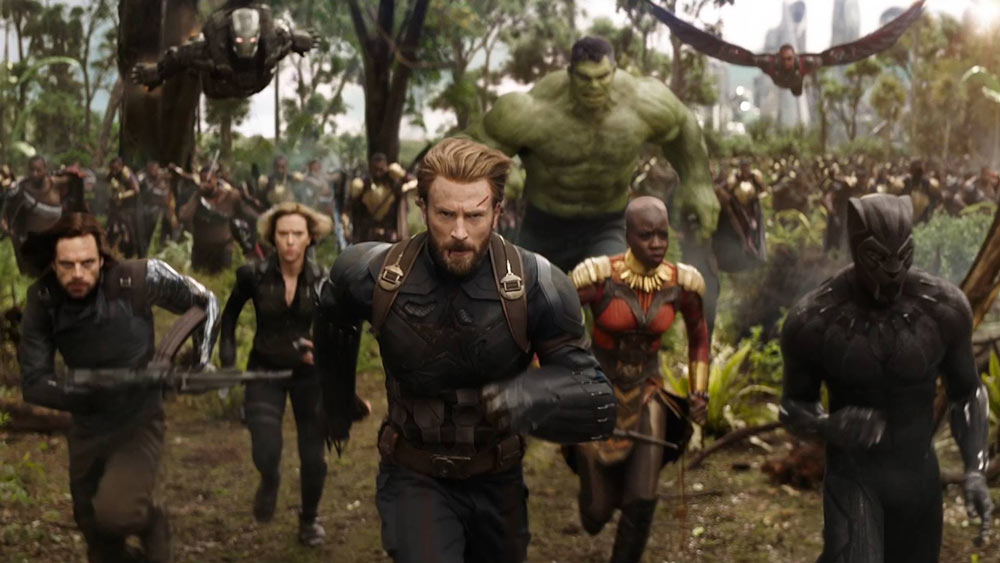 If there is a central character in Avengers: Infinity War it’s the villain Thanos. This is his movie and he receives a lot of screen time. It has been said that Marvel has a villain problem. Villains tend to be underwhelming and instantly forgettable. I don’t always think that to be true and this year we already had a great villain in Black Panther’s Kilmonger. Thanos is another great villain, whose arc is almost Shakespearean tragic.

Avengers: Infinity War crams a lot in 156 minutes and at certain moments it can feel overwhelming. The cast has been divided into small groups who each have a different task at a different location. This way there several stories going on at the same time, constantly switching between them until almost all of them come together for the finale. Much of the fun comes from putting characters together who otherwise would never interact together. Tony Stark quibbling with Dr. Strange and Star-Lord on a remote planet for instance.

Another weakness of the M.C.U. is that all movies are just basically set-ups for the next one. Therefor there is little at stake for our heroes. Of course they’re never seriously in jeopardy, but it does come off as a self-parody when even the small parts are coming back from the dead. A long time comic book trope. Agent Coulson was killed of in The Avengers, but resurrected for the Agents of S.H.I.E.L.D. TV show. Even a main villain like Loki has cheated death now multiple times.

After 10 years and several contracts ending after the next Avengers movie, everything is on the table now. The movie does deliver in this department as it actually kills off several big players in the M.C.U. The question remains whether dead is really dead. This is a brave choice by Marvel, but I’m curious if they will cheat the audience by cooking up some convoluted scheme to undo Thanos’ handiwork. That fact that one of the Infinity Stones is a Time Stone is rather worrisome.

Avengers: Infinity War is a movie that ends on a cliffhanger. It’s also the bleakest Marvel movie to date. This is as close as Marvel has come to the darker tone of the average DC movie. But there is still much to laugh. There are moments of humor even in the fiercest battles. These moments made me slightly chuckle, though they had some audience members in stitches.

Avengers: Infinity War has some flaws, but I found it to be an impressive and overall really enjoyable movie. Despite the dour undertone or maybe even because of it.  This movie finally feels if there are actually things at stake here. There is the constant feeling that certain characters can meet their demise at any minute. Especially human characters like Iron Man and Captain America. How much will a simple suit do against a God?

Avengers: Infinity War isn’t a perfect movie, but it’s a perfect Marvel movie. This is what they have been building up to these last 10 years. It does feel like we’re reaching the end of something. This movie does not work as a standalone movie, but as the penultimate chapter to an incredibly large franchise it’s an amazing cinematic experience. This movie left me wanting more as soon as the end credits started rolling. It is going to be a long wait.