I’m a fan of old school action movies. I grew up on Stallone, Schwarzenegger, Van Damme and Seagal taking on armies back in the 80s and 90s. I even saw plenty of second-rate action flicks back in the day starring the likes of Michael Dudikof, Dolph Lundgren, Cynthia Rothrock and Rutger Hauer. None of those movies could actually considered as “good”, but they were fun and entertaining.

Nowadays this type of action movie is hardly made anymore. The ones that are, are often low budget flicks shot in Eastern Europe. They often star an ageing action star, 20 years past his prime, who is just in it to collect a paycheck. But there is still one guy out there who is making these movies like it’s 1989 and who gives every movie 200%, making him the current reigning king of DTV action movies: Scott Adkins.

I associated Adkins mostly with Jean-Claude van Damme, since they did a couple of movies together: The Shepherd, Assassination Games, The Expendables 2 and Universal Soldier: Day of Reckoning. It wasn’t until I started watching the Undisputed Trilogy (when it was still a trilogy) that I started to follow his movie career. His breakthrough role was as Yuri Boyka in 2006’s Undisputed 2. Since then he has been headlining DTV action movies and occasionally starring in theatrical releases, often as a henchman. He was the Weapon XI Deadpool in X-Men Origins: Wolverine, was beaten by a cape in Dr. Strange and killed off in the first half of American Assassin. Truly a waste of talent in my opinion. But now Adkins is starring in his own comic book movie: Accident Man.

In Accident Man Adkins plays Mike Fallon. A hitman who stages his murders as accidents or suicides. Hence the title of the movie. Like in John Wick there is a whole underground scene of assassins and a bar they all operate out of run by Ray (Ray Stevenson). His “colleagues” are a colorful group of characters, each with their own specialty. When his ex-girlfriend is murdered, Fallon suspects one of his colleagues to be behind the hit. This puts him on a collision course with them as he tries to find out who murdered her and who gave the order.

What is really interesting is the casting. Among the actors are Michael Jai White and Ray Park. Yes, both Darth Maul and Black Dynamite have a role in this movie. Catering to the comic book audience, this movie basically features a fight scene between Weapon XI/Lucian/Universal Soldier and Spawn/Universal Soldier/Gambol/Jax and Darth Maul/Toad/Snake Eyes. It’s one big comic book/video game/movie crossover.

On paper Accident Man doesn’t sound really original. If you just read the synopsis you might think of it as a DTV copy of John Wick. While it certainly has similar themes, Accident Man has its own unique qualities. More qualities than just a leading man who can really perform all of his own fight scenes. Accident Man is a passion project by Adkins, who not only stars but also co-wrote and produced this movie. It is based upon a short running British comic book, which he loved as a kid. Its embraces its comic book origins, as most of the people Fallon comes across are larger than life. From an ax-wielding psychopath to a guy named Poison Pete who hisses like a snake.

It’s a tongue in cheek flick with balls to wall action scenes. Part of the humor comes from Adkins’ dry voiceover which is featured the majority of the movie. At one point he even talks about the meaning of the word defenestration. I was already aware of the existence word and its rather goofy meaning. I have even used it deliberately on several occasions. To see it being used in a similar context made me feel like I was in on the joke. I have to give them credits for that. 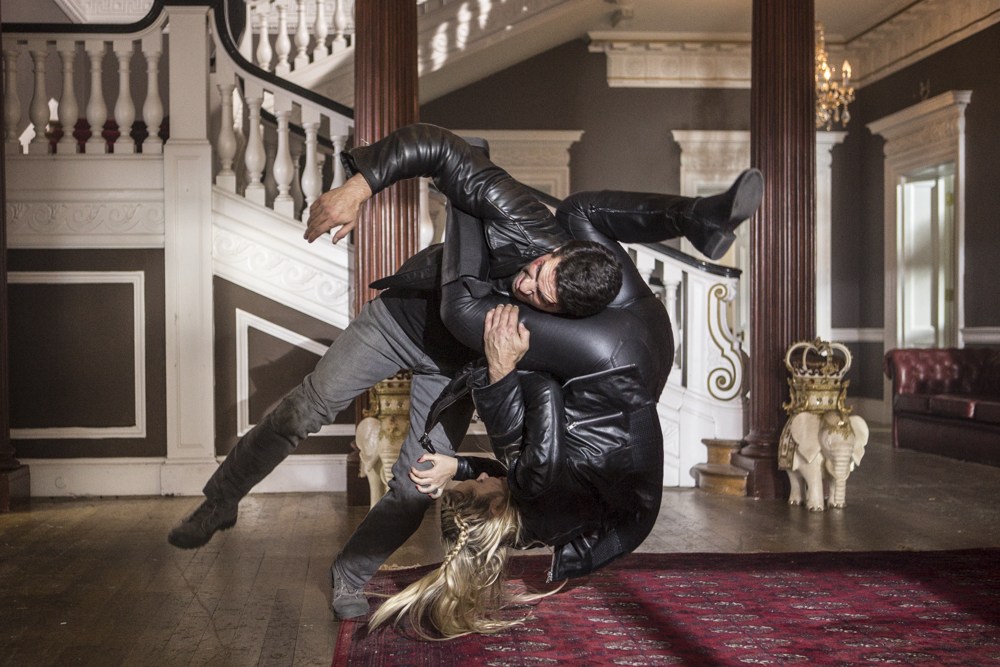 But you can’t have a good action movie without some good action. Accident Man features plenty of action scenes, all of them involving Adkins versus one or more other persons. There is even a classic bar fight in which everybody seems to be waiting in line for their turn. With fellow martial artists like the aforementioned Jai White and Park in the cast you can expect lengthy, expertly choreographed action scenes. Sometimes a bit too lengthy as they occasionally seemed to go on and on.

The highlight in my opinion is a fight scene against Amy Johnston who plays the colorfully named Jane The Ripper. She is a skilled martial artist and almost gives Adkins a run for his money as she demonstrates how she is at least as acrobatic at him with her high kicks and jumps. We don’t often see women in leading roles in movies like this, but Johnston has the potential to become the next Gina Carano or Ronda Rousey.

Overall Accident Man is a fun movie. Despite this being a low budget comic book movie, it looks great and makes good use of the British setting. The one thing it could have done better was the story. A lot of the elements have been lifted from other movies, making it feel as if I was watching some kind of John Wick meets Snatch meets Kick-Ass mash-up. I also thought there was way too much voiceover by Adkins and the pacing could also have been better. The movie does tend to drag at certain moments and feels out of balance. Rearranging and/or cutting some scenes could have made this a more fast-paced movie.

I think one of the biggest problems I had with the movie was the “man behind the curtain”. As the famous saying goes: A movie is only as good as its villain. The person who gave the order to kill Fallon’s ex is just some random character who is introduced in the finale. It would have been a better choice to introduce him in the first act and really set him up as this evil character. He simply lacks development.

After Boyka there is potential for Mike Fallon to become Adkins’ next franchise character. There are plenty of routes this character can take and plenty of action stars we can pit against Mike Fallon. I’m hoping this movie will be a big enough hit to warrant a sequel, because it’s probably the most fun low budget comic book movie of 2018.