After the Dream Warriors and a Dream Master the Nightmare franchise brings us the Dream Child. Though the promotional materials have you believe Freddy becomes the father, the gimmick this time is actually that he’s able to stalk people in their dreams because of the unborn child last installment’s survivor Alice is carrying. As you might recall Freddy somehow needed Alice and her power to bring other people into her dreams so he could kill. Apparently with Alice now able to control her dreams Freddy needs the fetus of Alice since it has the same abilities and a fetus sleeps 80% of the time so we’re told.

A Nightmare on Elm Street: The Dream Child is one of my least favorite movies in the series. This and the next installment present us with a Freddy who is constantly cracking jokes, which aren’t even funny. The dream sequences and subsequent deaths of Dan and Greta early on are filled with a silly one-liners that become tiresome really fast. As Dan is strapped to his car seat Freddy’s constantly laughing and saying stuff like: Don’t dream and drive, put the pedal to the metal, I feel the need for speed, fuel injection etc. Greta’s death by food stuffing is filled with other stupid puns like “Filet de Barbie” and “You are what you eat”.

And don’t even get me started on Comic Book Freddy…

Though the movie has a more gothic feel to it than the uber-slick “A Nightmare on Elm Street 4: The Dream Master” had, Freddy is even less scary here. This is partially due to the changed make-up making him seem less burned and more human. The special effects are also very weak in this installment and you can tell by everything that this movie was probably a rush job after the enormous success of the previous movie. The same mistake they made with the second movie. 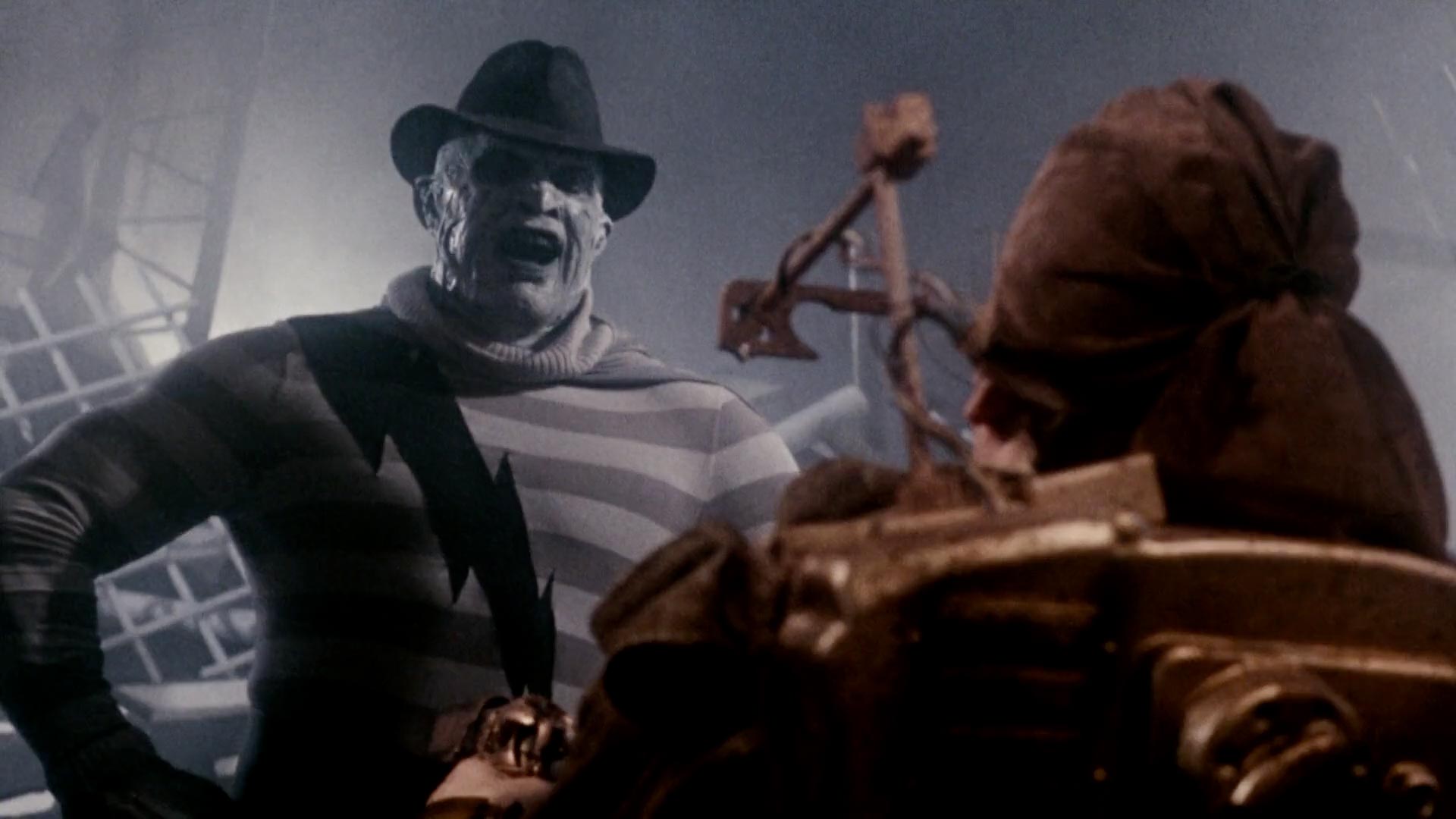 Next to Freddy the only other character to be immediately associated with the franchise is Nancy from the first and third movie (Actress Heather Langenkamp was in part 7, but she played herself). But some credit must go to the character of Alice who actually survives not one but two movies. Any other recurring teen character like Nancy, Kristen, Kincaid or Joey never made it through a second movie. Alice here beats Freddy twice, the second time while even being pregnant. Which actually makes Freddy even less imposing; here’s this paranormal entity being defeated by a pregnant teen.

It’s not a complete waste. Some scenes do some show some inventiveness like an M.C. Escher inspired set, Dan becoming a motorcycle and Mark’s transformation to a cartoon character. But overall the dream sequences aren’t up to par with the previous movies. The few times they do work is when they play it relatively straight and go back to tone of the first movies with boiler rooms, abandoned churches and other grim settings. There’s also a whole subplot of Amanda Krueger which are the only moments that Englund gets to play Freddy straight and show us the threatening menace he once was many, many movies ago.

Despite the baby angle this movie is a color-by-numbers installment in the franchise. It retreads the previous movies and brings nothing new to it. They’ve taken the character of Freddy and squeezed it as much as they could, but the well is seemingly drying up. What once was the man of your nightmares is slowly becoming that annoying uncle with the same stupid jokes at every birthday.

A Nightmare on Elm Street 5: The Dream Child