After watching The Fast and The Furious years ago I somehow never worked up an appetite to watch the rest of the movies in the franchise. But with number 6 just released and number 7 on its way I was curious how this franchise evolved over the years, if any. After watching the first movie recently and concluding it was a movie about insecure men with small penises, compensating with their pimped cars and apparently being closeted homosexuals I was curious how “gay” the second movie would be.

It was one big steamy sausage fest.

After giving Vin Diesel meaningful looks in the first movie Paul Walker returns to do the same to Tyrese Gibson. They were buddies when they were young but Tyrese got sent to jail due to Walker and now he holds a grudge. But that’s just a simple excuse to constantly get physical with Walker. The first time they see each other it just takes five minutes before they’re rolling around in the hot sun in the sand, all sweaty and stuff. And it doesn’t stop there. Throughout the movie, especially the first half, these two seek stupid excuses just to touch each other. Of course there are hot sexy women out there, potential love interests but the movie never goes in that direction. Eva Mendes is thrown in for good measure, but at the end of the movie she goes home alone and we see Tyrese and Walker walk off together. Not helping is the fax that Tyrese is seemingly jealous of Walker and Mendes spending time together and saying stuff like: every time you get in trouble it’s because of a woman

One of the less subtle scenes feature Walker doing a “stare and drive” in which the driver stares at his passenger instead of minding the road and other traffic, yet stops correctly in front of a red light. Tyrese then pulls up next to them and says: “he got that from me”. So somewhere in their mutual history Tyrese did a “stare and drive” to Walker. These guys are meant to be, or at least Tyrese thinks so.

There is still some street racing going on, though it’s less important to the plot than it was in the first movie. When they do happen the screen is filled with brightly colored cars representing all the colors of a rainbow.

And the less spoken of Devon Aoki’s pink car the better.

Director John Singleton made some good movies in the early 90’s. It all started going downhill after Shaft. This is another one of his weaker movies as it basically is a two hour testosterone fest of macho men talking macho talk and driving in cars that have been basically raped. I mean, who in their right mind thinks those spoilers look cool? The plot is fairly simple: a rich man needs some drivers to get him money from a trailer he owns which is being watched by the feds. That’s it, and they need almost two hours to tell this story. It’s like porn where a simple pizza delivery suddenly takes over 20 minutes. 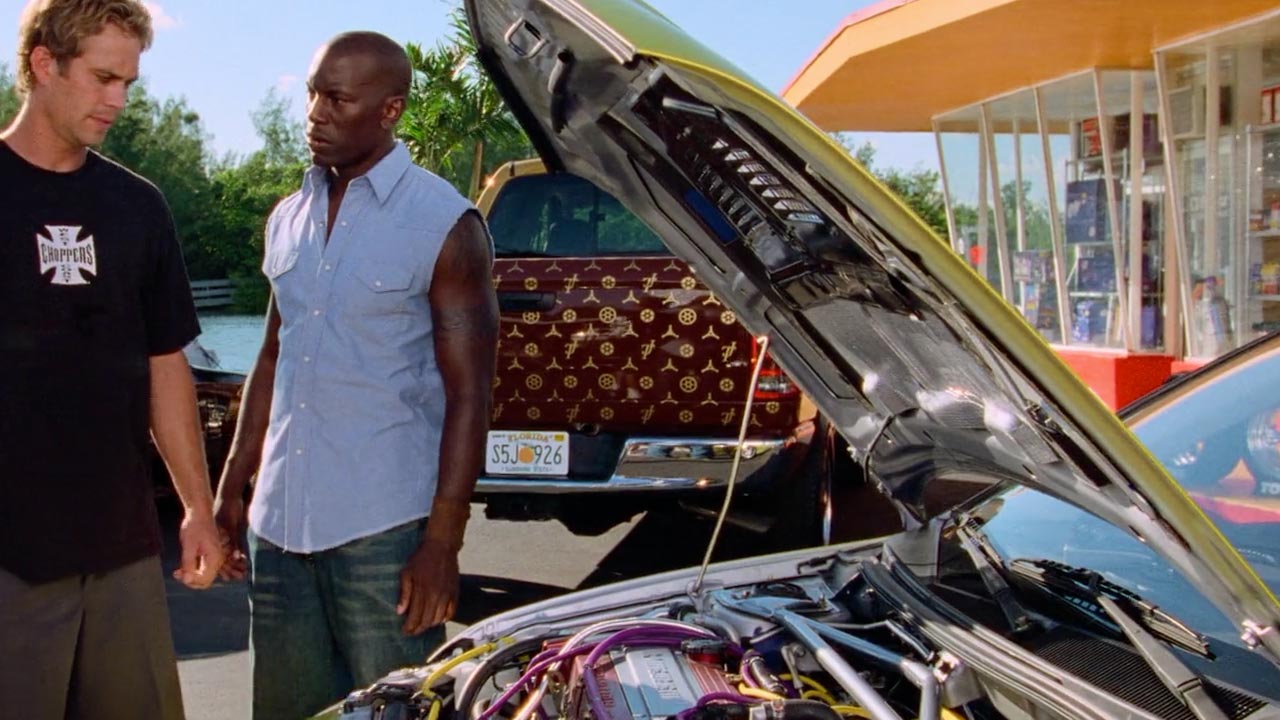 A louis Vuitton inspired custom paint job, how gay is this movie?