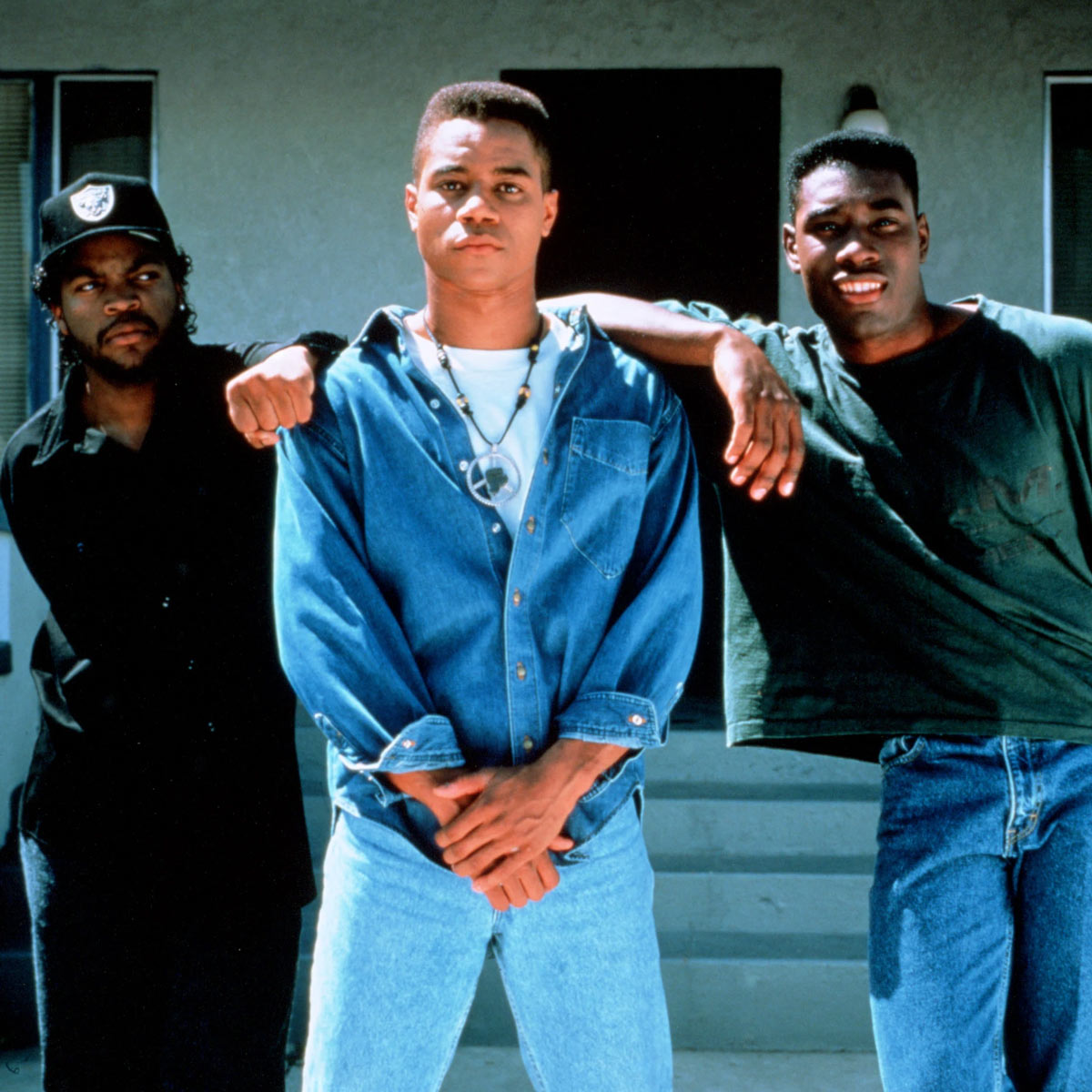 With the release of Straight Outta Compton last week a somewhat dormant genre has been given a fresh breath of life: the “urban drama” or rather the “black urban drama” also known as “hood movies” though that term applies to all movies just set in a “hood”. There is an interesting circle of life thing going on here as the subject of Straight Outta Compton, the controversial rap-group N.W.A., is partially the reason this genre exists in the first place. Black urban drama movies where the logical follow-up to the blaxploitation movies of the 70’s. Blaxploitation movies were mostly movies that had no real connection with reality. Some of them dealt with down-to-earth stuff like drugs, prostitution and violence in the black communities but in such a way it could only be seen as escapism for black people who now had people on the cinema screens to look up to. Pam Grier, the one woman army going on a crusade of revenge  in movies like Coffy and Foxy Brown or Richard Roundtree in Shaft. Most of the blaxploitation movies were over the top and gave birth to stereotypes like the pimp look which is still in favor today with at least one person at every costumed party.

When the blaxploitation wave of movies settled in the late 70’s black actors and actresses were more and more incorporated in mainstream TV and movies. TV shows like The Cosby Show had high ratings and actors like Mr. T. and Carl Weathers were household names. The only problem was that the black people portrayed on TV were often white in terms of behavior and their situations. The Cosby Show is a good example of this; here is a family living in a big house and the father is a well-paid doctor and the mother a lawyer. Problems like racism don’t exist in this world so there’s never an episode about how Theo was shot by a cop thinking he was going for a gun. In a way The Cosby Show was a movie about white people’s problems but the actors just so happened to be black.

But in the late 80s N.W.A. burst onto the musical scene with their controversial record “Straight Outta Compton” giving birth to gangsta rap, paving the way for artists like Snoop Doggy Dog, 2Pac and Ice-T. What these artists did was provide a rather large percentage of the black community in the US with a voice and gave them a face to the outside world. The world of ghettos and all that accompanies it was something few people outside of them knew anything about, but these artists were able to paint us a pretty good picture with their lyrics. But a picture is worth a 1000 words so it wouldn’t be long before black movie makers would bring the day-to-day life in the ghetto to the big screen giving birth to the “hood movie”.

Probably the first true modern day hood movie was Spike Lee’s Do The Right Thing; a movie depicting several cultures clashing on a very hot day in Brooklyn. The critical and commercial success of this movie and the popularity of gangsta rap provided studios with enough reason to have black filmmakers make movies about every day life in the hood. The early 90’s gave us now classic movies like Boyz N the Hood, New Jack City, Juice, South Central and Menace II Society. Trying to give their movie some extra street credit directors would sometimes cast notable gangsta rappers in their movies; Ice Cube starred in Boyz n the Hood, while Ice-T ironically played a cop in New Jack City.

One notable aspect is how the gangsta rap music fits so well with the early hood movies like Menace II Society incorporating songs throughout the movie. The music videos of Snoop Doggy Dog and Dr. Dre often depicted the same visuals and settings as these movies did. The small cheap wooden houses filled with black people most of them young kids, the neighborhood barbecues, the pimped rides and young black men sipping gin and juice on their front porches. The only difference between those music videos and the movies was the latter had a larger focus on the downside of living in the ghetto. There were of course the protest songs by N.W.A. with the accompanying videos which featured the black band members running for the police, but that changed when gangsta rap became more down-tempo and the G-funk sound was introduced. Music videos would somewhat glorify life in the hood. Early videos would portray the neighborhood as one big happy family, while later the gangsta life style would be glorified like in the video of “2 of Amerikaz Most Wanted” by Snoop Doggy Dogg and 2Pac. In the movies  people could be enjoying a barbecue in the afternoon and performing a drive-by later on that night, something the videos never showed probably because they wouldn’t be aired on MTV. 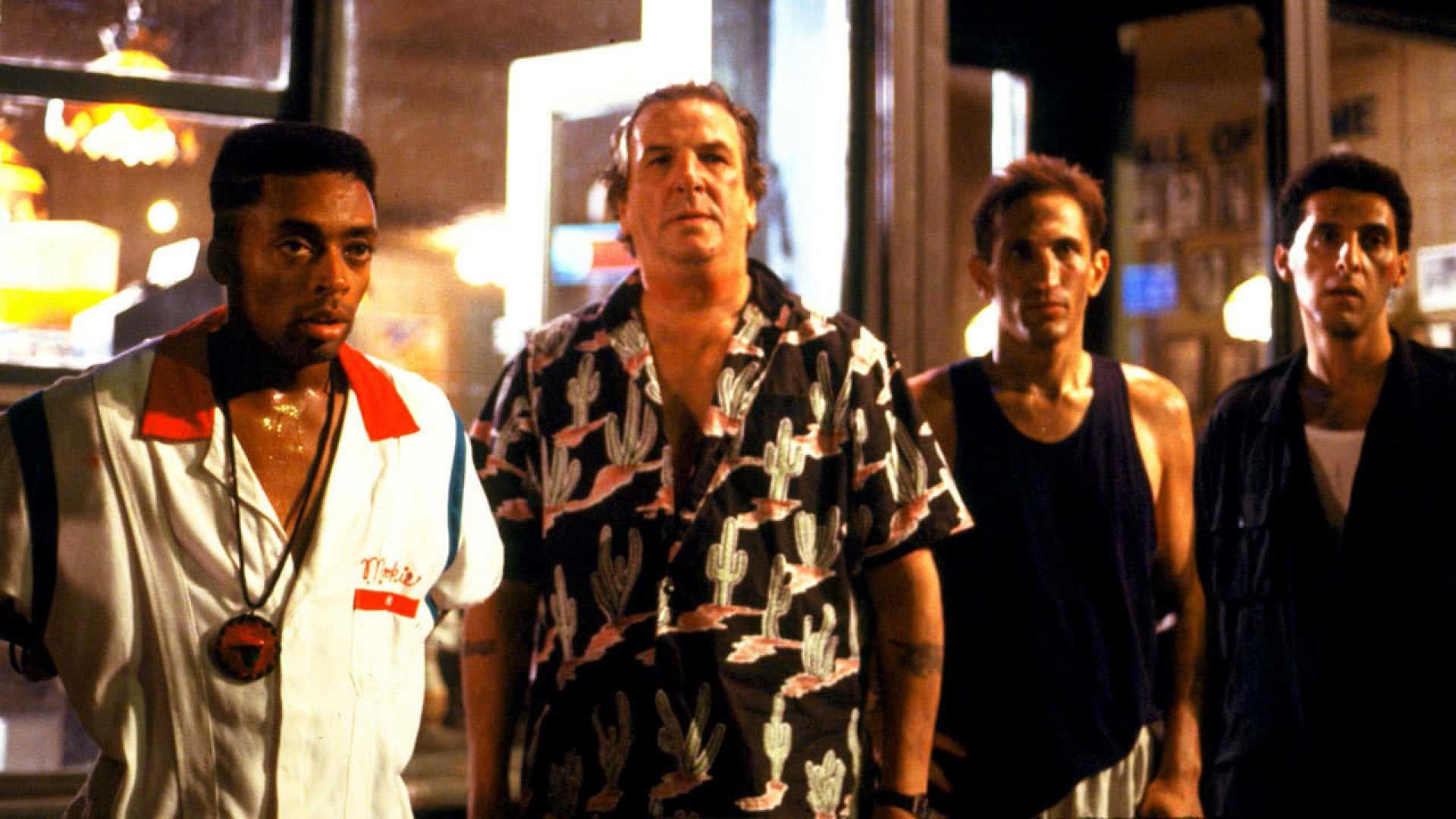 Because Hollywood loves its morals and audiences usually want to see people doing bad stuff pay their dues these movies balanced on a fine line between being realism and fantasy. In a lot of cases the people featured in this type of movies were hardly saints. Growing up in these areas, it seems to be only a matter of time before young black males turn to crime to make a living. therefor a lot of movies tend to give their character some form of redemption; in South Central a young gangster is sent to jail, converts to Islam and once released tries to prevent his son from following in his father’s footsteps.

A recurring theme in these movies is young people trying to get out of the ghetto by trying to receive a scholarship or moving to a better location with some saved up money. Money not always acquired the right way. This provides the writers with a way to at least gave their protagonists some sort of happy ending. Some of the more gut-punching movies tend to be more realistic like Menace II Society which shows a more logical and raw ending by having the protagonist gunned down by someone he got in a fight with earlier. In South Central the main character has gotten his son out from under the clutches of a gang, but the next day they both still wake up in the ghetto where they have to make a day-to-day living. 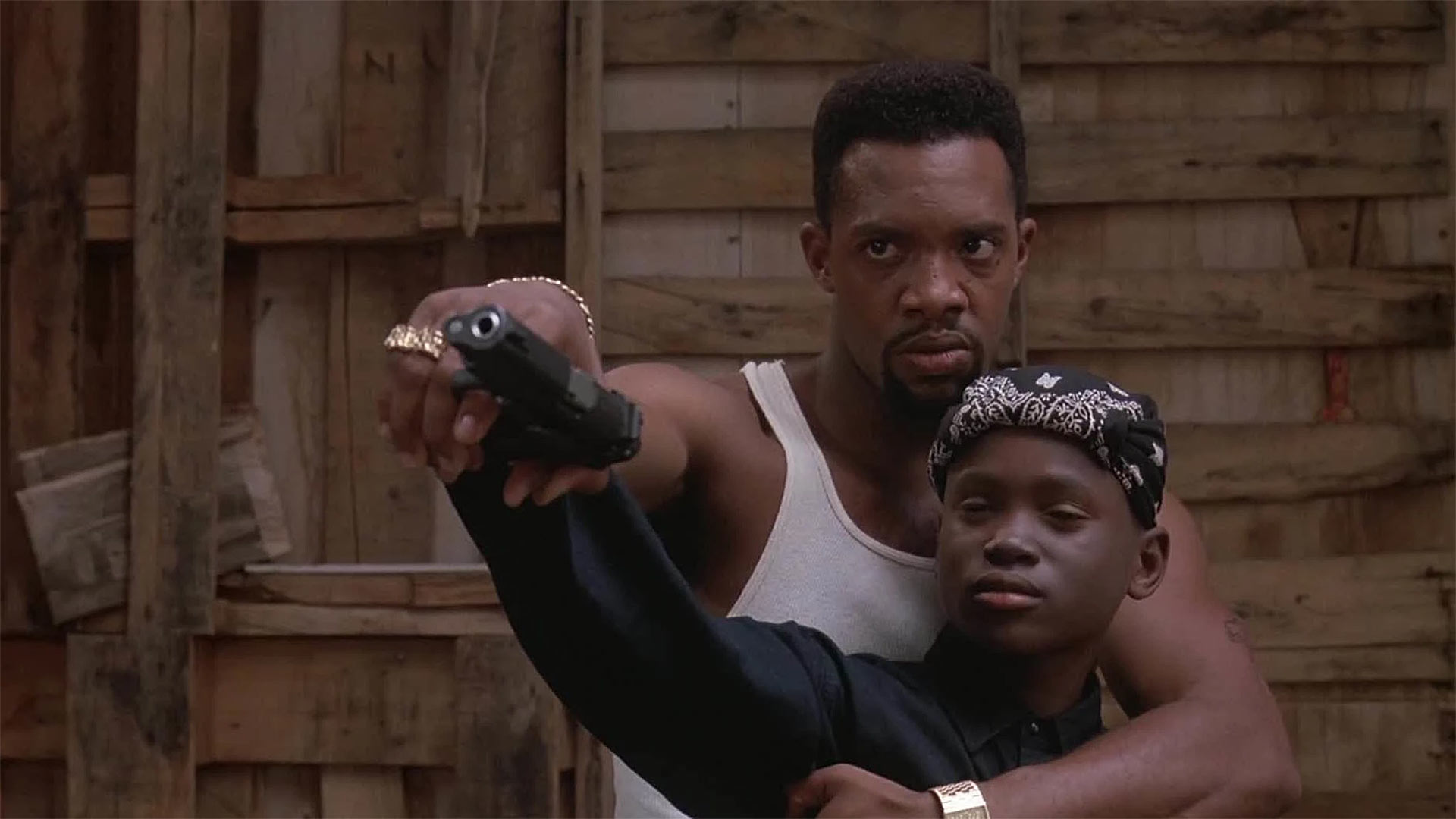 It’s a basic rule that every genre that is around for a while is subject to a parody and the hood movie is parodied in the Wayans’ Don’t Be a Menace to South Central While Drinking Your Juice in the Hood. Their first parody of what would be many since they also took on the slasher-revival with the first two Scary Movie pictures. At one point even the mediocre Leprechaun franchise took place in the hood in two movies, one even featuring Ice-T in a part. The second half of the 90 also saw directors moving away from the pure drama elements of these movies and making action movies or comedies set in the hood. Ice-Cube wrote and starred in three Friday movies and a movie like Set It Off revolved around four black women robbing banks and is most notable for En Vogue’s “Don’t let go” which was in the charts like forever.

After the 90’s the hood movie never disappeared but the movies that were released either strayed far from the original concept of “every day life in the ghetto” or can only be called hood movies in a broad sense. While labeled as a one, movies like Training Day, Brooklyn’s Finest and Narc don’t have the same feel as the first hood movies, mostly because the lead characters are neither black nor poor. A lot of a movies like Training Day take place in the hood, but are viewed from a cop’s perspective so it never truly embodies the hood. This is a movie about someone going to the hood and finding himself in a hostile environment, rather than someone living there. 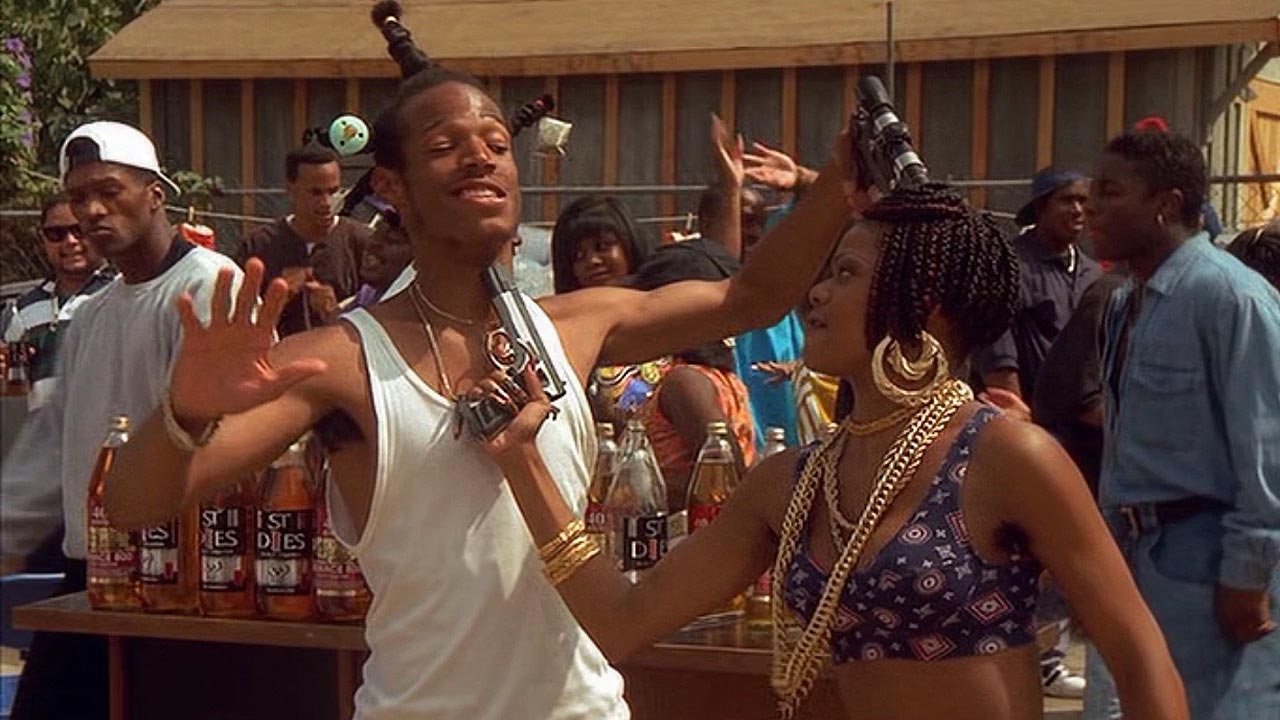 The hood movie gave Hollywood some of today’s biggest stars. Several actors went on from appearing in low budget movies about the inner-city to big budget blockbusters. Samuel L. Jackson, Ice-Cube, Cuba Gooding Jr., Wesley Snipes and Chris Tucker are just a few names who got their first chances to truly shine in urban drama movies. Before this genre existed these actors had no credits or only played bit-parts in “white movies”. One notable name who has made only hood movies is the late Tupac Shakur, who sadly never really got the chance to shine in another genre since critics actually found him to be a talented actor. A couple of years ago I’ve written an extensive article about 2Pac’s movie career.

Some of the directors who started making hood movies as now directing big studio movies like Spike Lee, John Singleton, The Hughes brothers and F. Gary Gray. While most of them have gone to bigger (and sometimes better) things, they never have fully abandoned the genre. Spike Lee has always made sure that the way he thinks the black community is treated and looked upon by other communities is reflected in his movies and F. Gary Gray has come full circle being the director that helmed the first Friday movie and now directed the rise and fall of N.W.A.

Like the western, the hood movie has proven to be a genre that can be dormant for a while until somebody has a good story to tell and turns that into a movie. Over the years that has been less frequent then in the early 90s, but every so now and then a good movie comes out. 8 Mile, Gran Torino, Fruitvale Station and Straight Outta Compton are examples of good hood movies that have been released since 2000. With the ever changing times I wonder if there will be a “hood movie” revival some day since the hood never seems to run out of stories.