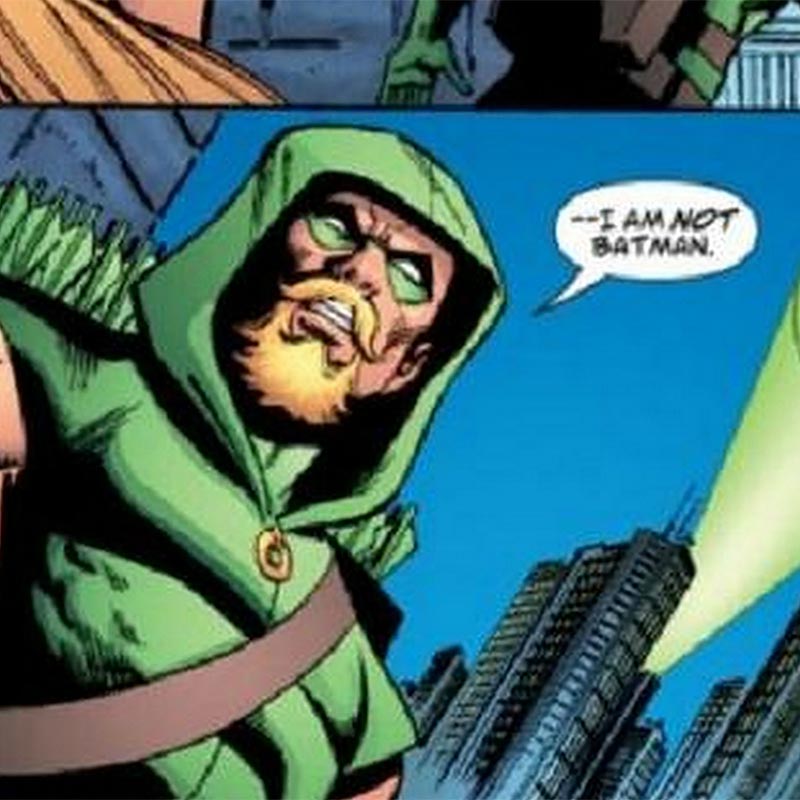 2012 was a good year for comic book fans as it brought us movies like The Avengers and Christopher Nolan’s conclusion of his Dark Knight trilogy titled “The Dark Knight Rises”. Also in that year a new TV show was introduced: Arrow. A show about a DC comics character, the same publishing company that owns Batman and Superman, who goes out at night as a vigilante. The show has received good reviews and is successful enough to warrant a spin-off: The Flash which has just started its first season a couple of months ago. I’m the kind of viewer who doesn’t pick up TV-shows as soon as they start airing. Unlike movies TV shows require a lot of time. Time I don’t want to waste on a show that’s cancelled after 8 episodes or a mere first season, has an open ending and/or derails after a strong first season. So now that Arrow is in its third season I decided to start watching this show as it apparently seems to be in it for the long haul and not a waste of time. Now that I’m almost up to speed with the current episodes I can conclude at least one thing: it’s basically The Dark Knight trilogy for TV.

I’m not familiar with the Green Arrow comics so this article will not be an in-depth comic to screen comparison. I will be just focusing on all the similarities between The Dark Knight and the Arrow.

First let us take a quick look into the world of comic book characters. One thing you will notice is that comic book publishers have similar characters. While Batman, Superman, Spider-man and Captain America are pretty much unique, the two biggest companies have plenty of characters which feature similar traits as some of their competitor’s characters. Marvel has Namor the Sub-mariner, DC has Aqua man. DC created Deadshot, Marvel has Bullseye. The comic book companies aren’t just ripping each other off, they also like to milk their own successes. That’s why a lot of male super heroes have a female counter part; Super Girl, Spider-Girl/-Woman, She-Hulk, Bat-girl. I won’t even begin about Spider-man and his clone Scarlet Spider, impostor Steel Spider, symbiotic costume inheritor Venom, his offspring Carnage, Carnage’s offspring Toxin, Doppelganger… etc. etc.

Long story short: in a way The Green Arrow is a rip-off of DC’s own Batman.

Both Bruce Wayne/Batman and Oliver Queen/Green Arrow are billionaire playboys with their own company (Wayne Enterprises/Queen Consolidated), who have supreme fighting skills and go out every night for some good old vigilantism. Now since I’m sticking to the movies/TV show I can even go further: They both have an underground lair and an inner circle with whom they work together. While not completely comparable you could say that Lucius Fox and Felicity Smoak serve the same purpose, and though there never was an actual Robin in The Dark Knight trilogy The Arrow has a sidekick named “Arsenal”, and like Robin he’s dressed in red. So even glancing over the characters it’s obvious how much these two have in common. Here are some more fun similarities:

Now let’s take a look at the story lines:

Destruction of a city

In Batman Begins an organization named The League Of Shadows, led by Ra’s Al Ghul, comes to Gotham City to destroy a hazardous neighborhood called the Narrows by using a machine created by Wayne Industries.

In the first season of Arrow successful business man Malcolm Merlyn, who was once a member of The League Of Assassins (led by Ra’s Al Ghul) tries to destroy a hazardous neighborhood named the Glades in Starling City with a machine created by Queen Consolidated.

In both cases they succeed partially as Batman/Arrow stop it in the middle of the process saving a lot of lives but not all.

The Dark Knight started out with Batman being the inspiration for regular people in Gotham City to dress themselves up as well and take on crime.

The second season of Arrow started off with the Arrow being the inspiration for regular people in Starling City to dress themselves up as well and take on crime.

In Batman begins The Scarecrow uses a certain self-developed gas which causes the person spread with it to see their greatest fear as if it was real. In The Dark Knight he’s trying to sell it as a street drug. In Arrow there’s a character named The Count who has made a drug called Vertigo. After his death another guy who names himself Vertigo modifies the Vertigo formula so that it will make the user see their greatest fear. This results in similar hallucination scenes in both Batman Begins and Arrow.

Speaking of The Scarecrow: His costume merely exists of a burlap sack-like mask. In the second season of Arrow Sebastian Blood uses nothing more than a skull mask to disguise himself, making him very reminiscent of The Scarecrow. He also uses drugs on people just like Scarecrow albeit with different effects.

In The Dark Knight Rises Bane takes over the city aided by The League Of Shadows. In Arrow Slade Wilson tries to take over the city with an army of Mirakuru Soldiers.

These are the most obvious elements showing up in both the movies and the TV show. The link between these two actually enforced by the fact that both make use of the same characters. Ra’s Al Ghul already has made an appearance in both movie and TV show and Arrow makes use of plenty of characters most primarily known from the other Batman movies, TV shows or comics. Clock King, Deadshot and Deathstroke to name a few.

So what do you think? Does Arrow steal too much from the Dark Knight movies or is TV an ideal medium to tell the same story but with more detail?