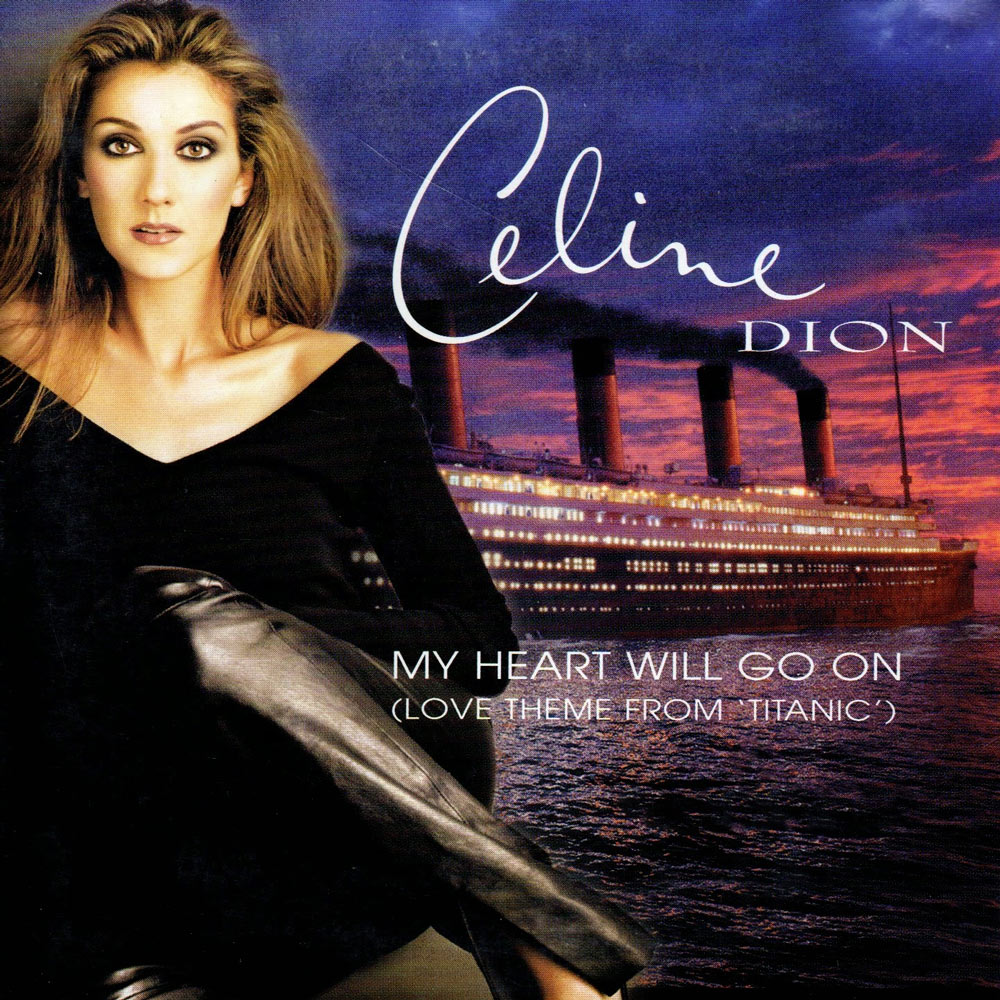 With the recent passing of Whitney Houston and 100th anniversary of the Titanic, which led to its re-release in 3D, it came to me that the movie theme song as a single accompanying a movie’s release is something that rarely happens nowadays. Whitney starred in The Bodyguard and the movie’s theme song “I Will Always Love You” was a worldwide success. In 1997 you couldn’t watch on MTV without seeing Celine Dion’s “My Heart Will Go On” every hour. The music videos for these songs almost always consisted of clips from the movie intertwined with clips of the recording artist or band in a similar setting, like Celine Dion on the Titanic set or Will Smith dancing with an alien in the “Men In Black” video. Especially in the 80s and 90s movies were released with a certified hit song as a part of the marketing campaign for a movie. This started decades earlier but apparently isn’t a part of movie campaigns any more nowadays.

“Movie theme song” is a wide term as it basically covers all signature music in a movie; from the instrumental theme to Jaws to “Summer Nights” from Grease, from “Somewhere Over The Rainbow” to “Wild Wild West”. We can divide soundtracks into three categories: 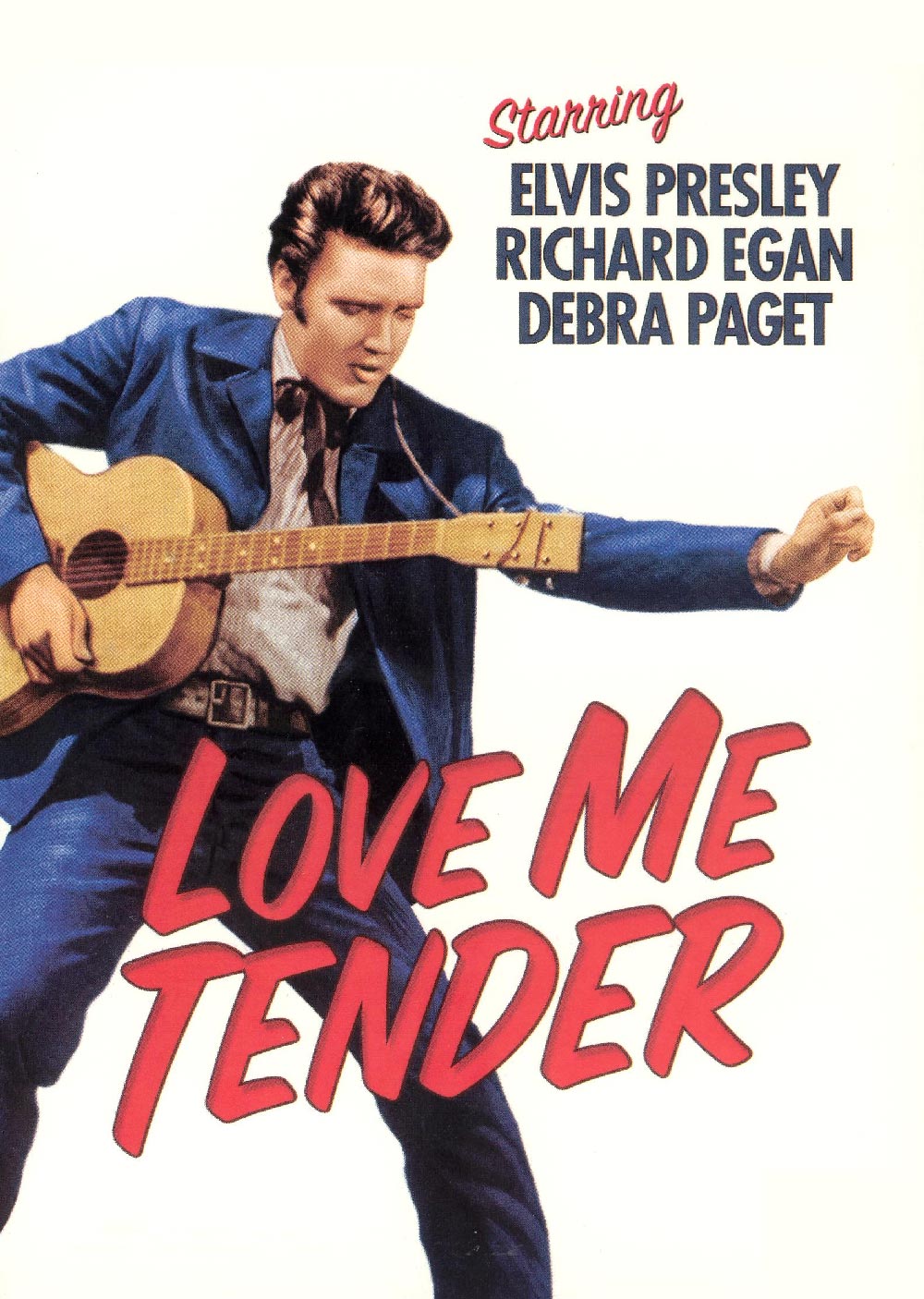 This brings me to the “Title Theme Song” that doesn’t seem to be used nowadays. Music was a part of movies from the very beginning when music was played over silent movies. Queues in the music emphasized the events happening on screen. When the so-called “talkies” were introduced music started being used for creating atmosphere which is still the case this day. If a movie featured songs they were mainly sung by the characters on screen and mostly portrayed the emotions of the person singing it.

Elvis Presley’s movies are notable for featuring stories which were wrapped around his songs. The poster for his debut emphasized on his musician’s background: “HEAR ELVIS SING… Love Me Tender, We’re Gonna Move, Poor Boy, Let Me”. This movie was marketed on pop music. The Beatles went the same route with movies like “A Hard Day’s Night” and “Yellow Submarine”. In the 60s pop music definitely became a part of movies with soundtracks which sold at least as good as the movies. Two famous examples are Midnight Cowboy featuring Harry Nillson’s “Everybody’s Talking” and the soundtrack to The Graduate by Simon & Garfunkel. 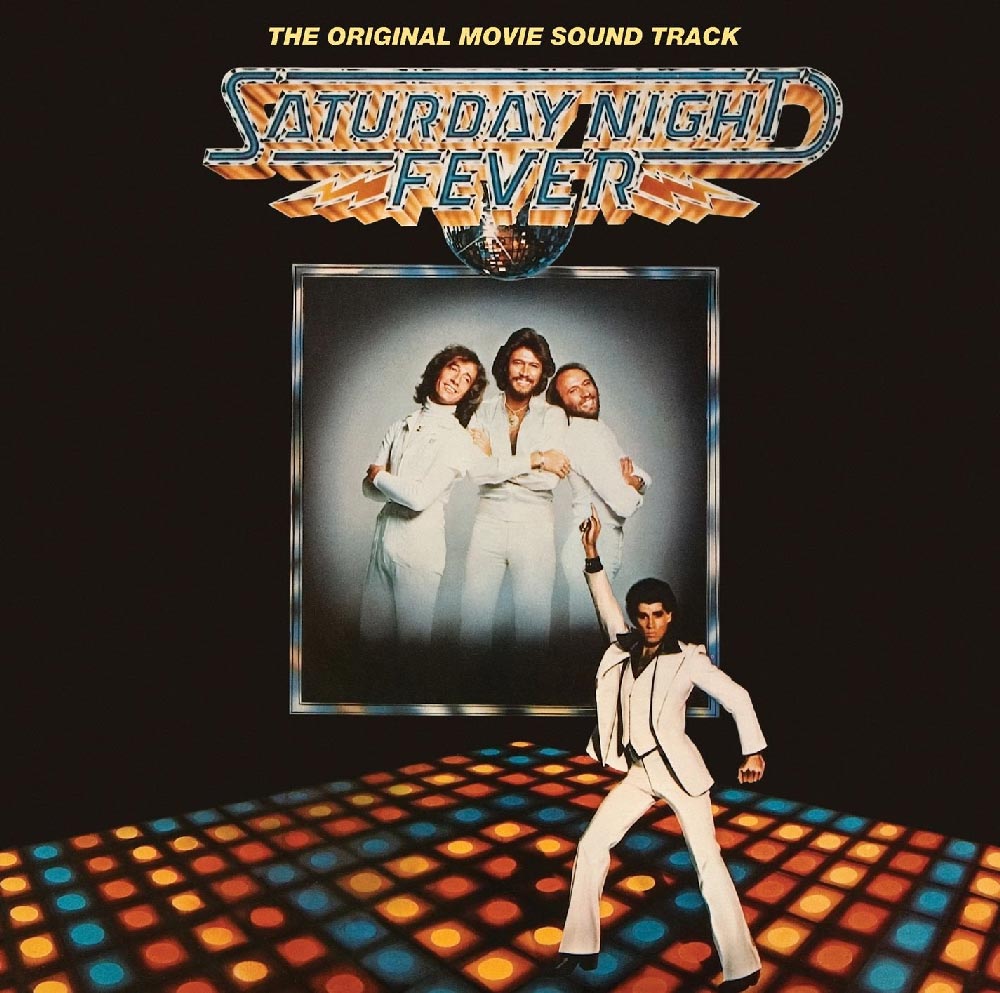 A decade later The Bee Gees would create the majority of the classic soundtrack of Saturday Night Fever, another example of a soundtrack that became even more popular than the movie selling more than 15 million copies in the US alone. Though there are music videos for their songs, clips from the movie are nowhere to be found in both Night Fever and Staying Alive.

Other notable examples are the title theme songs for the James Bond movies that were introduced with From Russia, With Love. These functioned as 3 minute commercials for the movies on the radio at the time of their release; an easy way of having not only the title of your latest movie as a catchy tune on the radio, but also having radio DJ’s mention or even discuss your movie. It wasn’t until 1981’s For Your Eyes Only by Sheena Easton there was a music video for a James Bond theme song. It was basically the opening credits from the movie, but without the actual credits inserted.

The 80s saw a significant change as the music video became obligatory for musicians which presented the movie studios with an ideal way to market their movies not simply by themes songs on the radio, but also on TV as music videos. The timeline for this is beautifully illustrated by the James Bond series. In 1979 there was no music video for Moonraker, in 1981 the aforementioned Sheena Easton was the first, and thus far only, singer to appear in the opening credits which also served as a music video. In 1983 Rita Coolidge sang “All Time High” for the movie Octopussy which had a music video filled with clips from the movie and contained lyrics that were directly linked to the main plot. 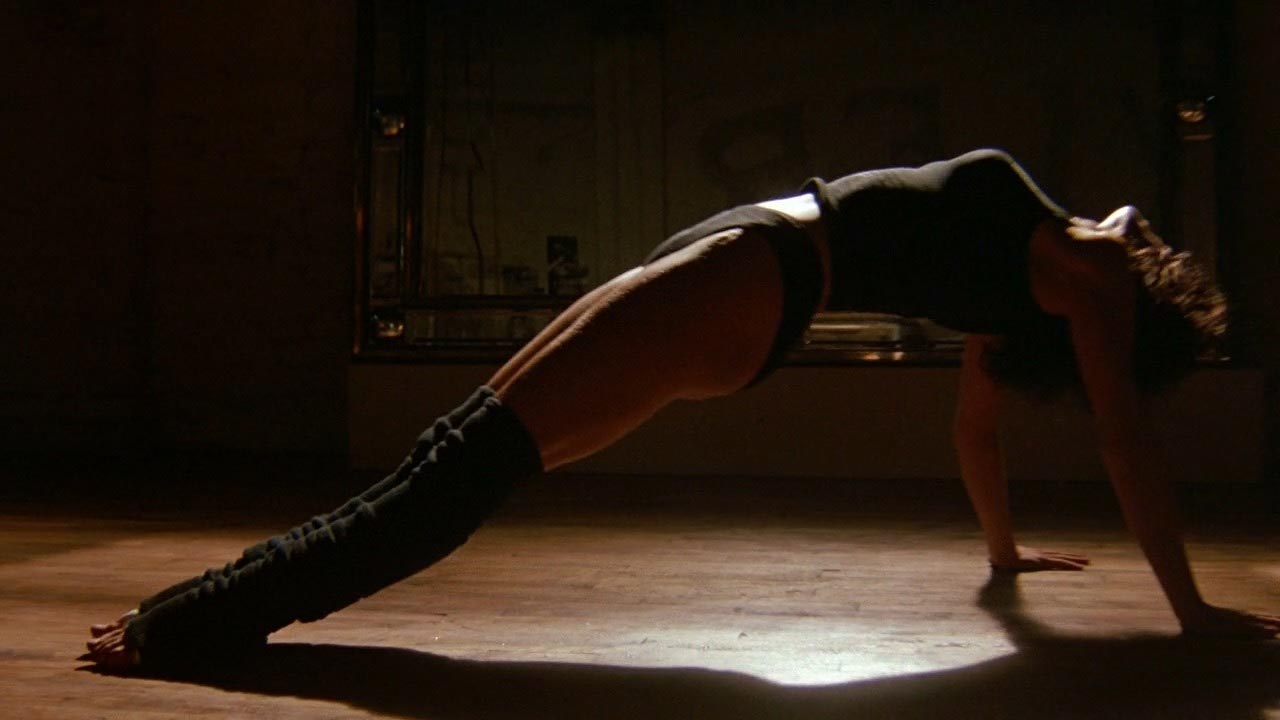 Also jumping on the bandwagon were the dance movies that were released at the time; Fame, Footloose, Flashdance etc. were all making use of advertising their movie through a music video by a celebrated artist. Irene Cara’s Flashdance (What A Feeling) doesn’t even show Irene Cara, just clips from the movie of people dancing. The same goes for that movies’ other hit: Michael Sembello’s Maniac. The music video consists of close-up shots taken from the movie of Jennifer Beals working out and dancing. Both Maniac and Flashdance feature a lot of the same clips.

Some movies went as far as becoming music videos themselves; Rocky III introduced us to Survivor’s “Eye Of The Tiger”; a song that is not only used as a montage track, but also was literally referred to in the movie. After Rocky III every (martial arts) sports movie had it’s own training montage single. The Karate Kid, No Retreat No Surrender, The Best Of The Best and Bloodsport all had their tune. Not all of them were singles, but some of them became a part of pop culture like “You’re The Best” by Joe Esposito which was used in a Rocky parody on South Park. 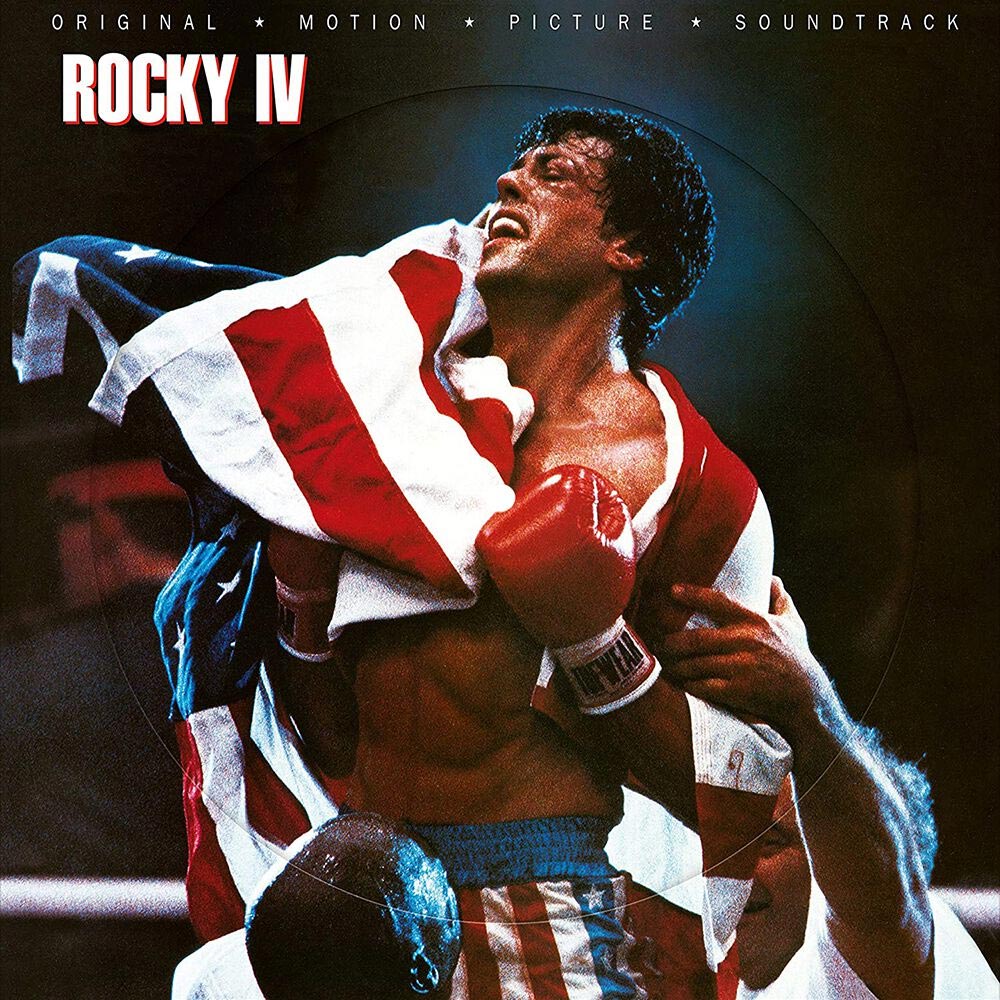 Rocky IV is generally regarded as an 85 minute music video with pop tune after pop tune inserted in the movie. Just take a look at the montage in which Rocky mourns Apollo’s death and compare it to the actual music video by Robert Tepper. Both are basically the same, featuring the same clips from the 4 movies only the latter has some shots of Mr. Tepper inserted between them. The Rocky IV soundtrack was very successful with three hit singles released. It’s also the only Rocky movie that doesn’t feature the iconic Bill Conti score.

Michael Jackson’s Moonwalker tied the music videos of his album “Bad” together with a crappy story line about one Mr. Big kidnapping a child.

The next two decades almost every high profile movie would be accompanied by a pop theme song to bring the movie to the attention of the audience. These music videos played out like 4 minute trailers which would be aired for free in music programs or on MTV. As a thank you to an artist it would be normal to give him or her a role in the movie, only if it was a cameo. Huey Lewis appeared in Back To The Future, Tina Turner was the villain in Mad Max Beyond Thunderdome. Whenever a movie had a singer in a leading role, he or she would almost always do the title song as well like Whitney Houston in The Bodyguard, Eminem in 8 Mile and Madonna in Who’s that Girl. The latter being a true movie title song veteran with songs like Die Another Day, Live To Tell, This Used To Be My Playground, Don’t Cry For Me Argentina and more. In 1992 the soundtrack for The Bodyguard broke the old record held by Saturday Night Fever as best-selling soundtrack and in 1997 Celine Dion’s “My Heart Will Go On” was the first original, non-musical song to win an Academy Award.

Here are a couple famous tunes which are forever linked to a movie:

As you can see most of the songs in this list are from the 80s and 90s. In the 00s it became less and less an instrument used by companies to advertise their movies with. The last notable music video I can remember was “Car Wash” by Christina Aguilera for the movie Shark Tale, though the movie Burlesque which starred Aguilera also had her singing the theme song “Express (Burlesque)” but it was never a hit. A clear example of how unimportant the theme song has become is the movie Battleship. This movie features the acting debut of popular singer Rihanna, yet there is no song by her on the soundtrack, no single thus no music video to enlarge the awareness of this movies’ existence.

Nowadays the Internet has taken over the duties to advertise movies. With banners, websites, teasers, (viral) videos and trailers movies are promoted, aided by movie sites and blogs who will gladly make the latest trailer for an upcoming potential block buster a headline. It has even gone so far that there are trailers for trailers and though trailers are cool, I miss the real movie theme songs because in the end I can recapture the pleasure a movie gave me by listening to the theme songs on my iPod. But there is still hope: this year’s Men in Black will feature a title theme song by rapper Pit Bull, though I doubt it will leave the same mark the original Men In Black song did, let alone become another “I Will Always Love You”.