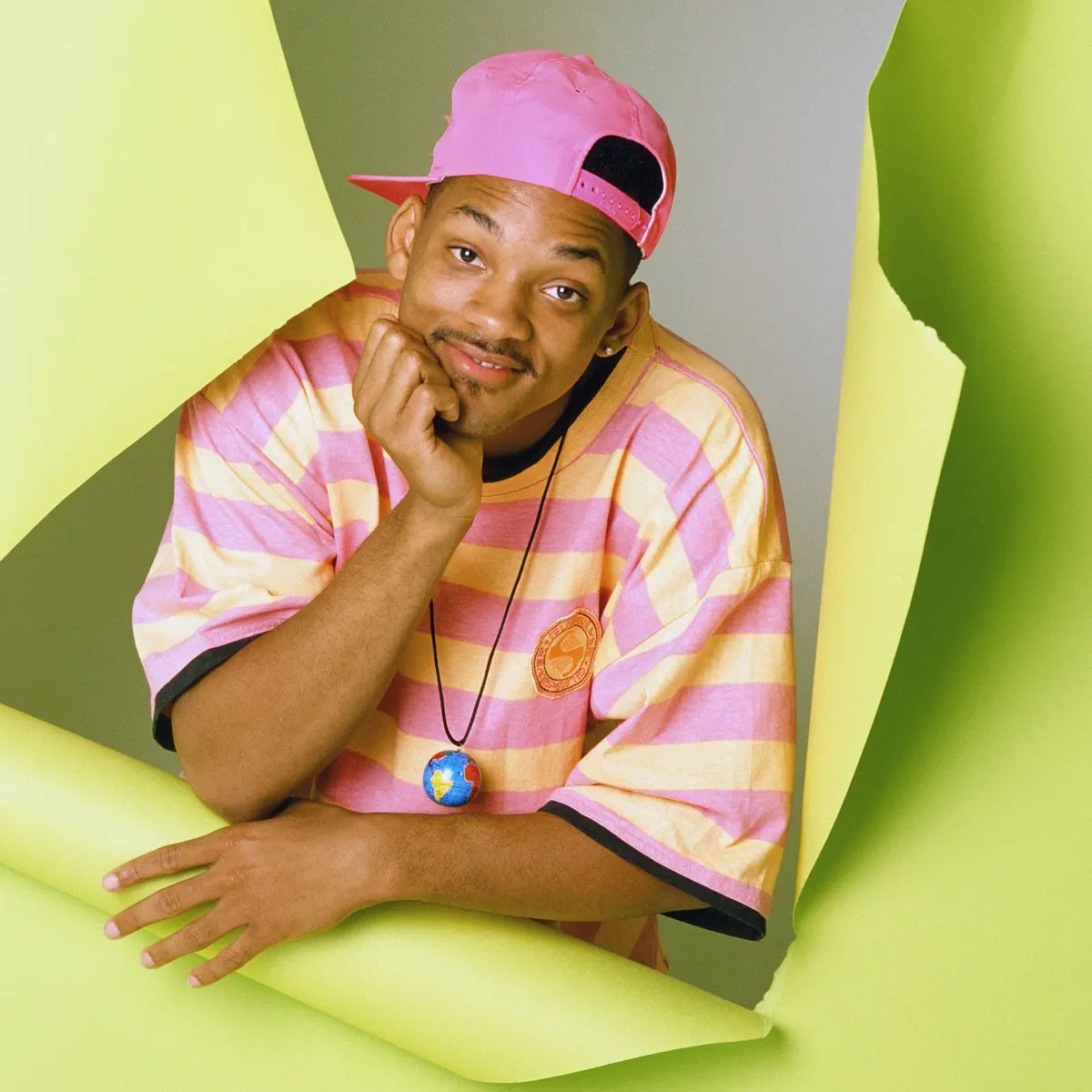 In West Philadelphia born and raised. Chances are you are now singing the tune to The Fresh Prince of Bel-Air in your head or maybe even out loud. The Fresh Prince of Bel-Air is one of those iconic sitcoms from the 90s that everyone seemed to watch and love. One of those shows that is constantly being re-run on a variety of TV-stations. Born in 1978 I was probably 14 years old when this show started airing in the Netherlands. I remember liking it, but since watching prime time TV was a family thing with me living in a one-television-household, I never saw all of the episodes. But through the wonders of streaming services I was able to revisit Bel-Air in its entirety and see for myself if this show still holds up after 30 years.

Yo home to Bel-Air!

The Fresh Prince of Bel-Air ran for a total of six seasons totaling 148 episodes. The show revolves around a street-wise Will Smith who, after a scuffle with a bully, is sent to live with his rich relatives in Bel-Air, California. Or as he puts it himself in the show’s theme song:

The show opens with Will Smith arriving at the Banks mansion where we are introduced to his wealthy relatives. His aunt Vivian and uncle Philip. Philip is a lawyer who is a partner at a law-firm. His wife Vivian has a PhD but she seems to be functioning in the role of the stay-at-home mom during the majority of the show’s run. They have three children: spoiled Hilary, pompous Carlton, and impressionable Ashley. The last main cast-member is the cynical and sardonic butler Geoffrey. 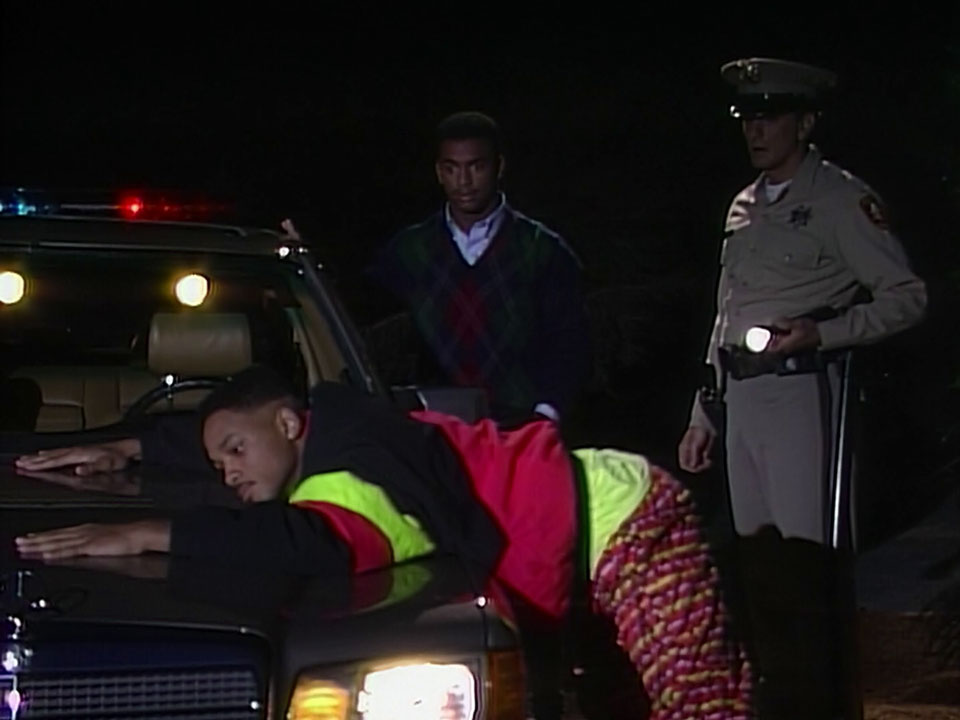 Most of the comedy comes from the contrast of Will’s working class background and the Banks’ upper class lifestyle. But so does the occasional drama, which is showcased early on in the first season when Carlton and and Will are pulled over by a cop. Carlton, who has lived a sheltered life, can’t comprehend he is apprehended for driving while black, whereas Will is all too familiar with this kind of situation.

But the show doesn’t delve too much into racial problems. This is a half hour prime-time comedy after all. 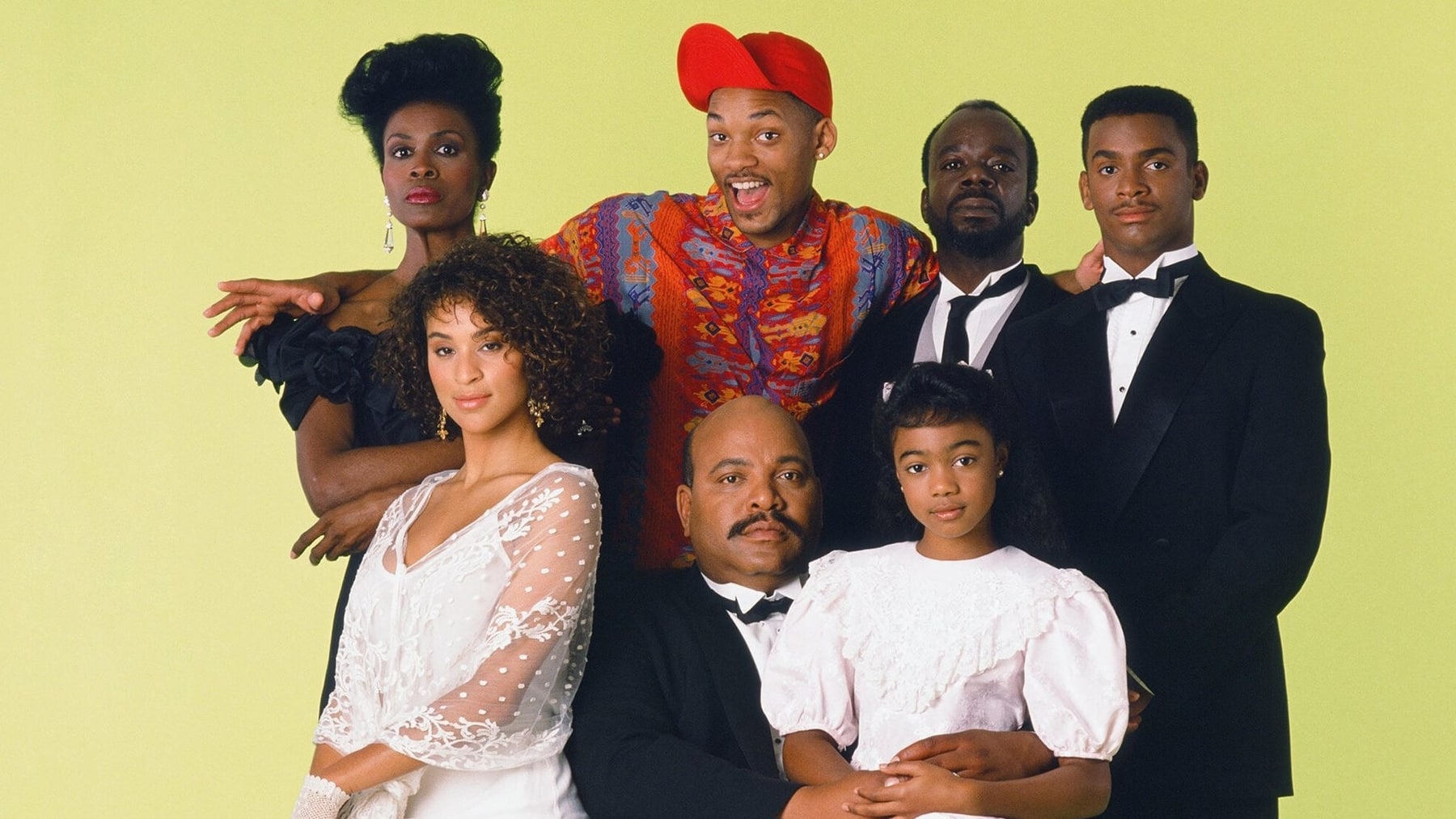 In the current age of streaming I binge watched this show. It took me a while, because the self-contained episode style of sitcoms doesn’t trigger you to watch the next episode as soon as the credits start rolling. So sometimes I watch two or three episodes back to back and then I wouldn’t watch an episode for a week or two. It wasn’t until I decided to actively work my way through this show, that I really started to watch in on an almost daily basis. But that wasn’t until I reached the second half of the third season. 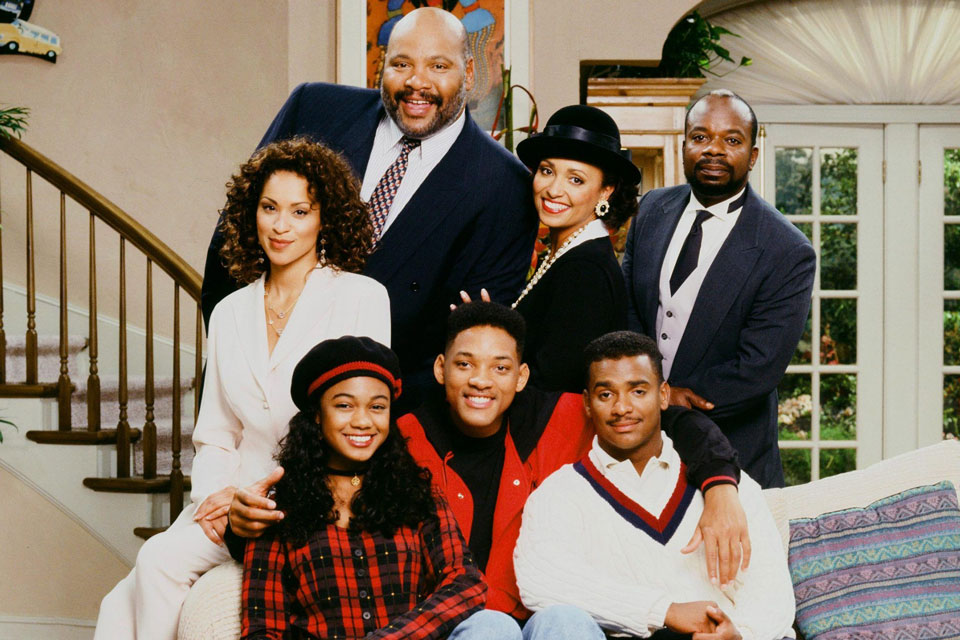 When you binge watch a complete show certain elements stand out more than watching a show once a week for half a year and then having to wait another half year before the show is back on the air. Often it’s small things, like how Jazz always wears the yellow and white shirt during scenes which end with him getting thrown out of the house by Uncle Phil. Another thing that stands out are supporting actors who play different roles in different episodes.

Elements that sorely stick out are repetition and the lack of character growth. In sitcoms there often isn’t much room for character growth. Hillary wouldn’t be funny any more if she acknowledged her character flaws and became less oblivious and spoiled. But even Will’s persona stays pretty much the same through out all seasons. This bugs me when you binge watch a show like this because eventually I was like: when will you learn from your mistakes? You made the same mistake the previous episode and the one before that. Will also often deals in dick moves played for humor. Like pretending he is Carlton when he answers the door and a gorgeous girl is standing there coming to pick Carlton up for a blind date.

Also certain character traits are probably fun when you see them once a week but not three episodes in a row within a 60 minute time span. In later seasons Will has the tendency to double down on a double entendre with an exaggerated wink exclaiming “You know what I’m saying huh? You know what I”m saying!”. This is funny on occasion, but he makes it a shtick that is in basically every episode at least once. It gets old fast, or at least it does when you binge watch a show like this. 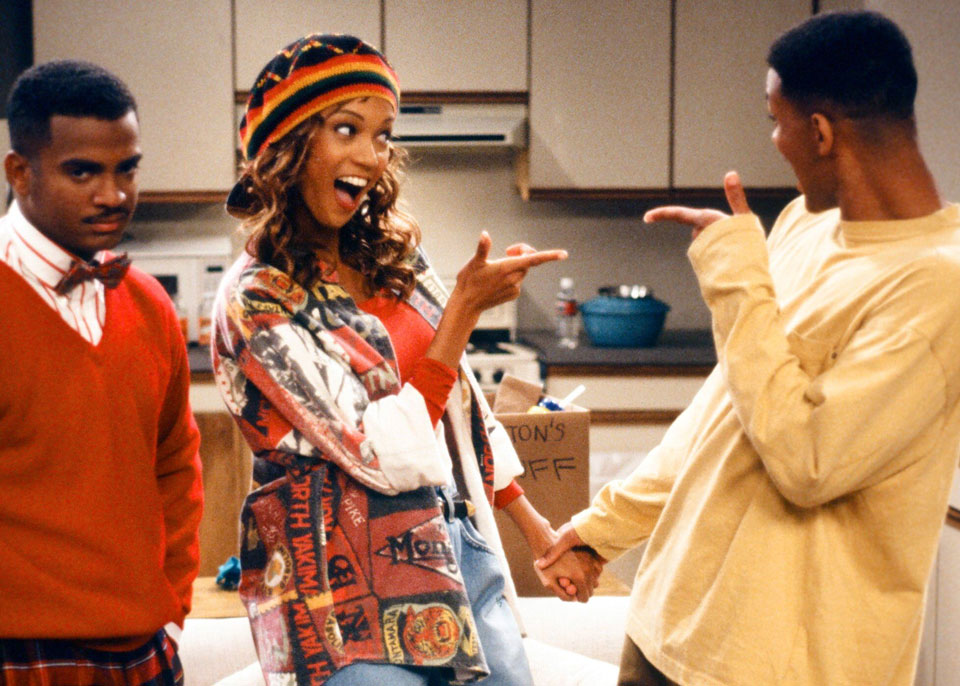 Like most sitcoms of the era recurring characters outside of the main cast often disappear at random, never to be seen or heard of again. Aside from Jazz, Will has a couple of friends who are his best friend in one or two episodes and then disappear never to be even mentioned again. There is one character who did not deserve this fate: Jackie.

Jackie, played by Tyra banks, is a character who runs a shop called The Peacock Stop and is an old friend of Will from Philadelphia. It’s hinted at that they were romantically entangled back in the day, but she isn’t really interested in being more than just friend to Will. This makes her the unobtainable object of Will’s desire. She is a recurring character in season 4, and while she’s Will’s boss she just suddenly vanishes without a trace. I’m guessing they didn’t know where to go with the character, because they were obviously setting up this will-they-won’t-they trope between her and Will, but probably ditched that idea when the show was renewed for another season. 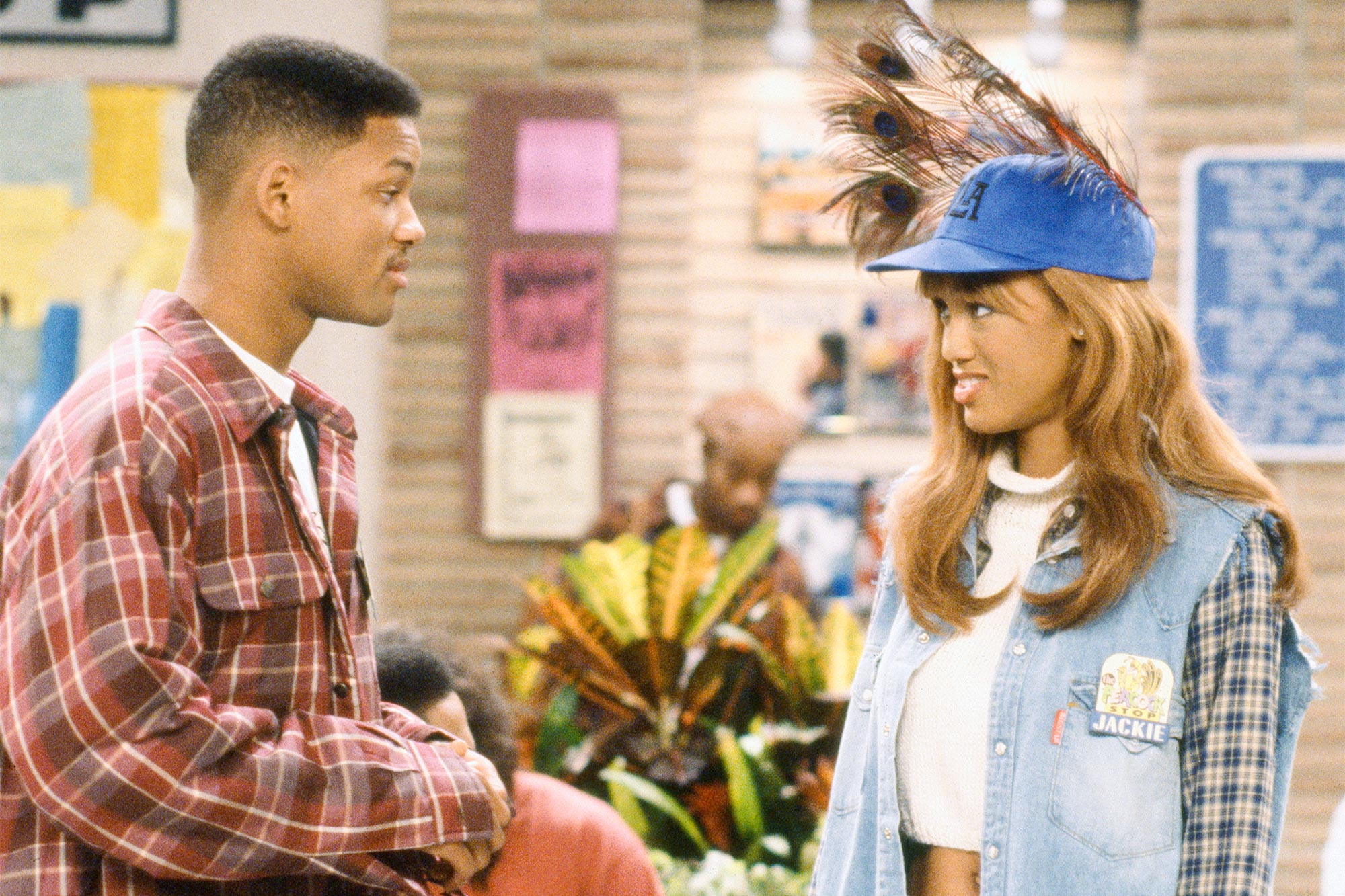 Things that have not aged well 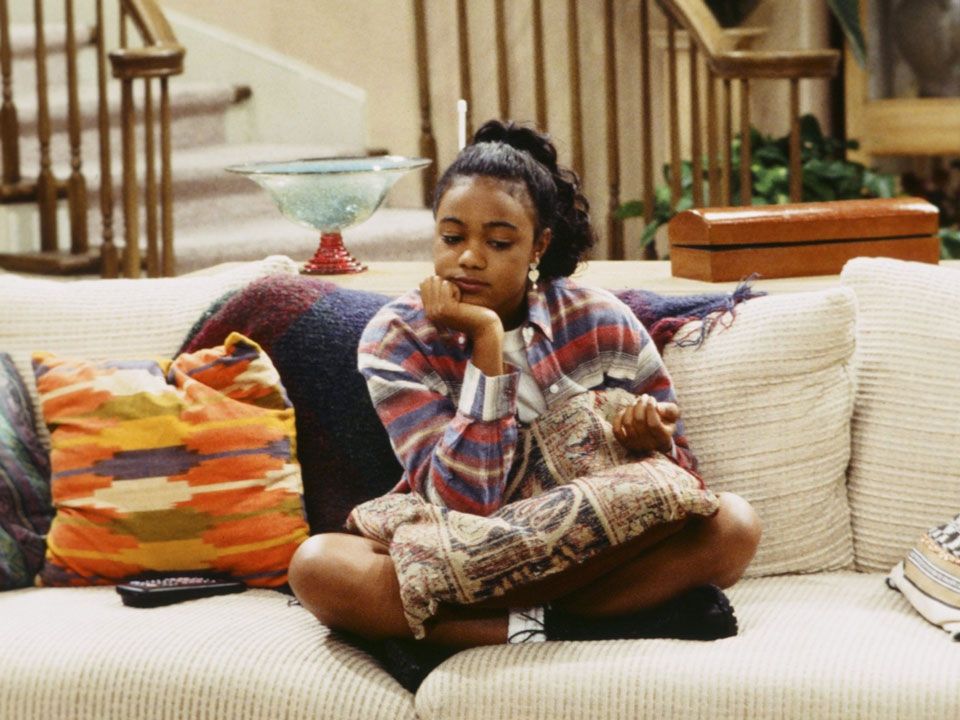 With the every changing dynamics of society older shows often have elements that are considered problematic in today’s views. Browsing through the comment section on TV-Time on each episode of The Fresh Prince it’s pretty obvious that people have a lot to complain about the show. I’m not one of them. I can see something as a product of its time without the need of comparing it to today’s society’s values.

The one thing that stood out in the comment sections is that some people actually hate Will. They think he’s a dick. Aside from the fact that he fails to learn from his mistakes, people complain about how he constantly fat-shames Uncle Phil, is a bully to Carlton, lies to women who he only sees as sex-objects and is homophobic.

I can see where people come from, but people who hold this show to such a high standard are forgetting that this is a weekly sitcom from the 90s. Sitcoms tend to have very little character development. Basically you’re being served the same dish every week, which is what people wanted back then.

Throughout the show’s run Will makes plenty of gay jokes. At one point he even ends up being an actor in a soap-opera only to find out that the character he’s playing is gay and he has to kiss a man on screen. You can probably guess how he responds to this. But Will not wanting to kiss another man is considered to be homophobic. Then again, whatever happened to the “my body, my choice” argument?

But like everything else The Fresh Prince of Bel-Air is a product of its time. There are probably plenty of TV-Shows being aired today that will be considered “problematic” 20-30 years from now. And they will keep on providing sites inspiration for those tedious “10 things that did not age well” lists. 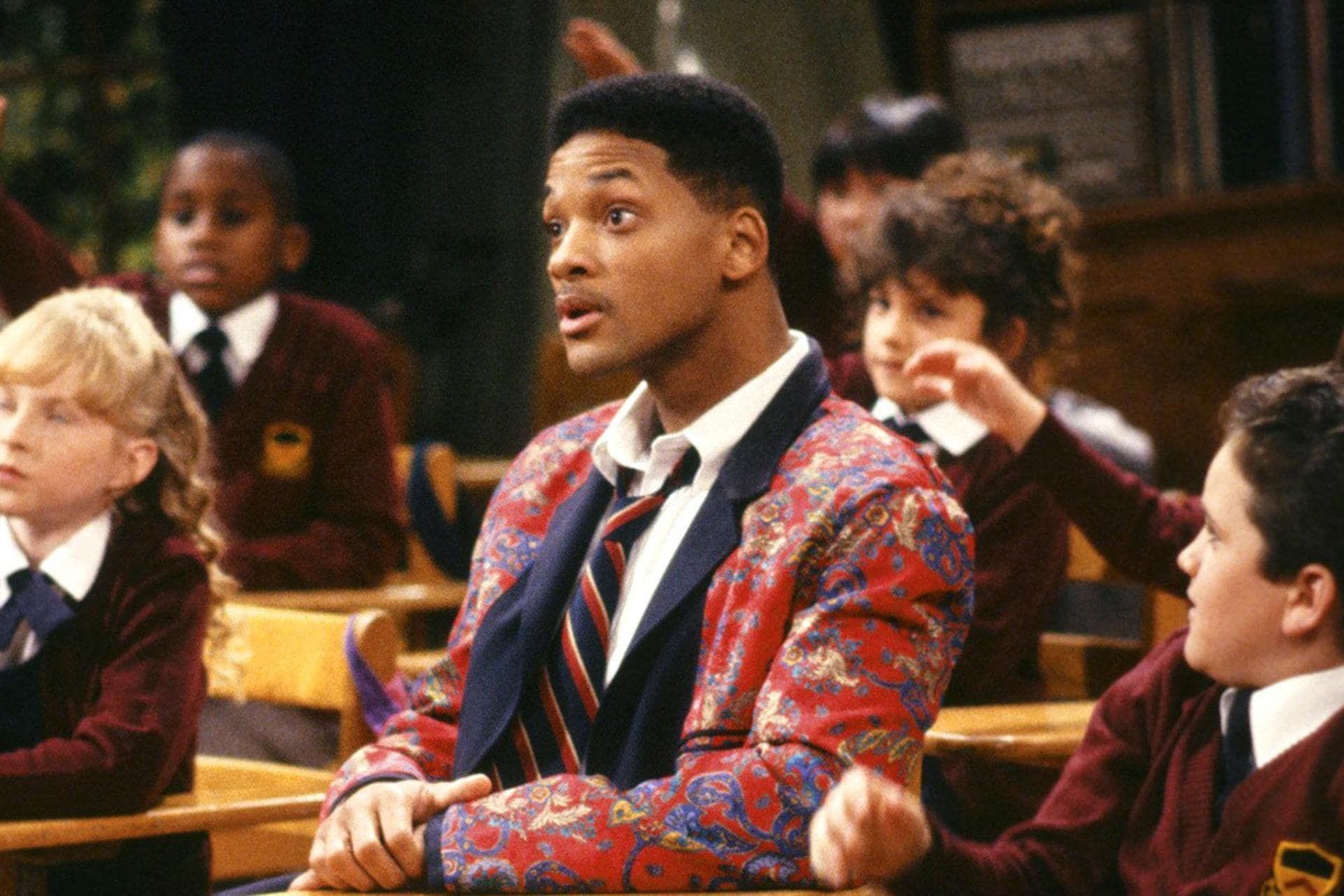 The show’s biggest legacy is of course Will Smith. He was a relatively successful rapper with a couple of hits under his belt, but this show introduced him to audiences all around the globe and primed him for an even more successful movie career. During the entire 90s Smith was riding high: starring in a hit TV-show, a couple of blockbuster movies and turning out hit-song after hit-song.

But there are some small aspects of the show that live on today. The Carlton dance has become a staple in pop-culture and is featured in games like Fortnite. But the show’s success influenced other shows like “The Jamie Foxx Show”. 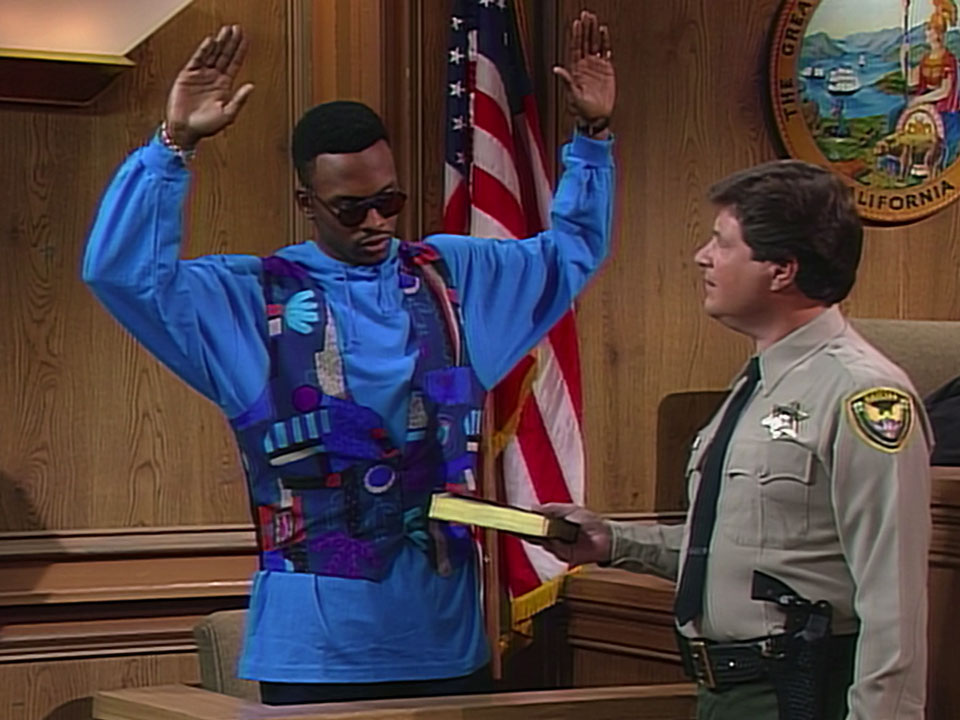 While the show will never be regarded as a thought-provoking show about the race-relations in the US, several moments from the show have been pointed out as still being relevant in today’s society. I already mentioned the driving-while-black episode, but another moment that rings painfully true comes from the season 2 episode “Cased up” in which Jazz appears in court with his hands up high as he has to put his hand on the bible held by an armed officer of the court:

“No way. Dude’s got a gun, next thing you know I got six warning shots in my back.”

While this was presented as a joke back in 1991 to the unknowing white suburban audience, these past ten years has given us enough cell-phone footage in which that joke is steeped so deep in reality, it’s not even a joke any more.

The Fresh Prince of Bel-Air is probably one of the few sitcoms with such a big legacy. Will Smith only has to start rapping the line “In West Philadelphia…” and the audience of a talk show or concert will perform the entire rap for him. Clips from episodes revolving around race still pop up every now and then when yet another innocent black man has been hurt or killed by the police or the system. The Fresh Prince of Bel-Air is a show that has managed to become a staple of American pop-culture, much more than all those other 90s sitcoms like Blossom or Who’s the Boss? 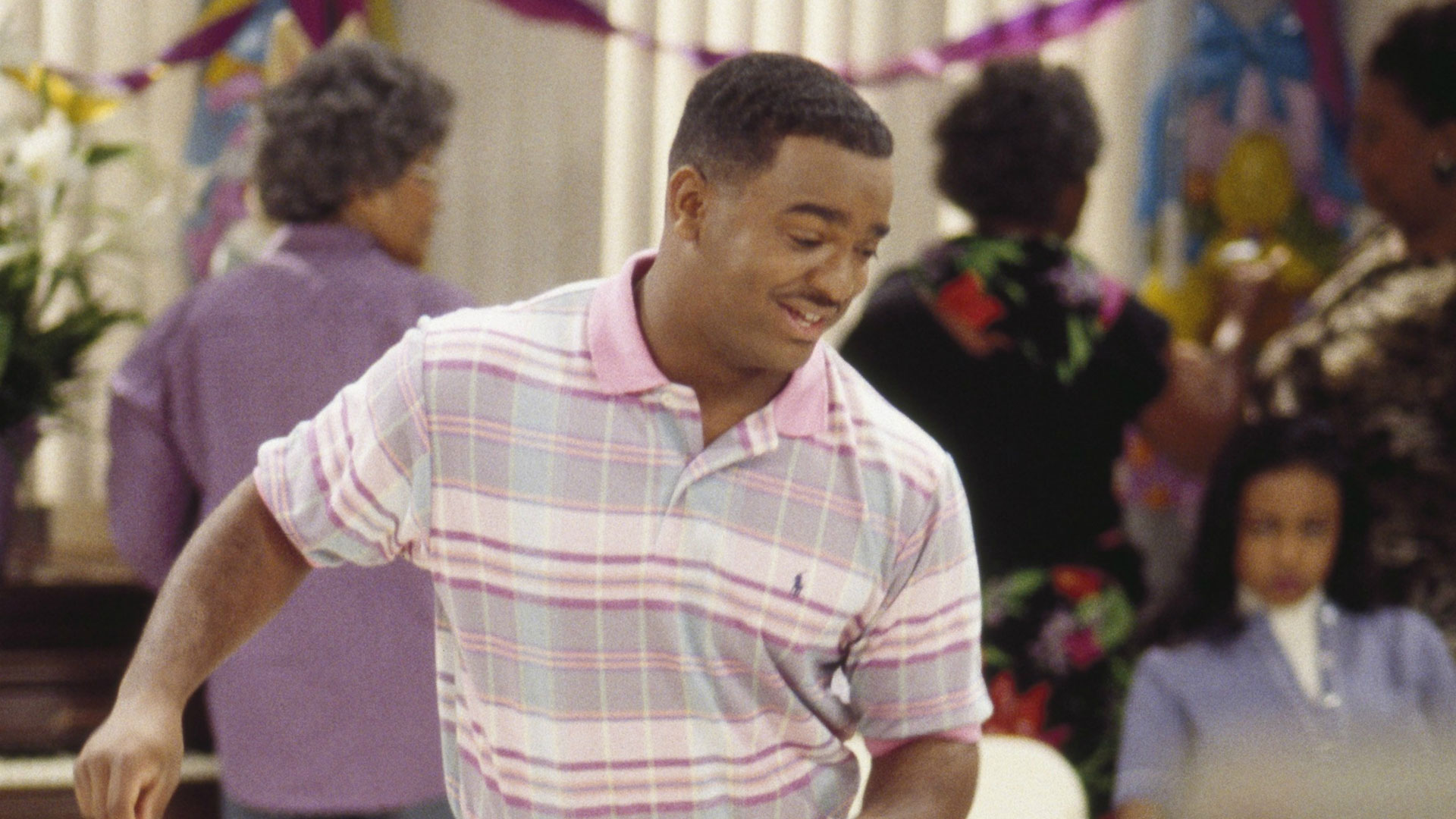 Looking back The Fresh Prince of Bel-Air still holds up well in terms of humor and entertainment. But the show should be taken in small supplies because of the repeting elements. If you watch an episode once a day you’re good. Just like shows like Knight Rider and The A-Team it provides some simple escapism, but not much else. But if you’re my age, the Fresh Prince takes you back to the glorious 90s, and I’m always game for a trip down memory lane.