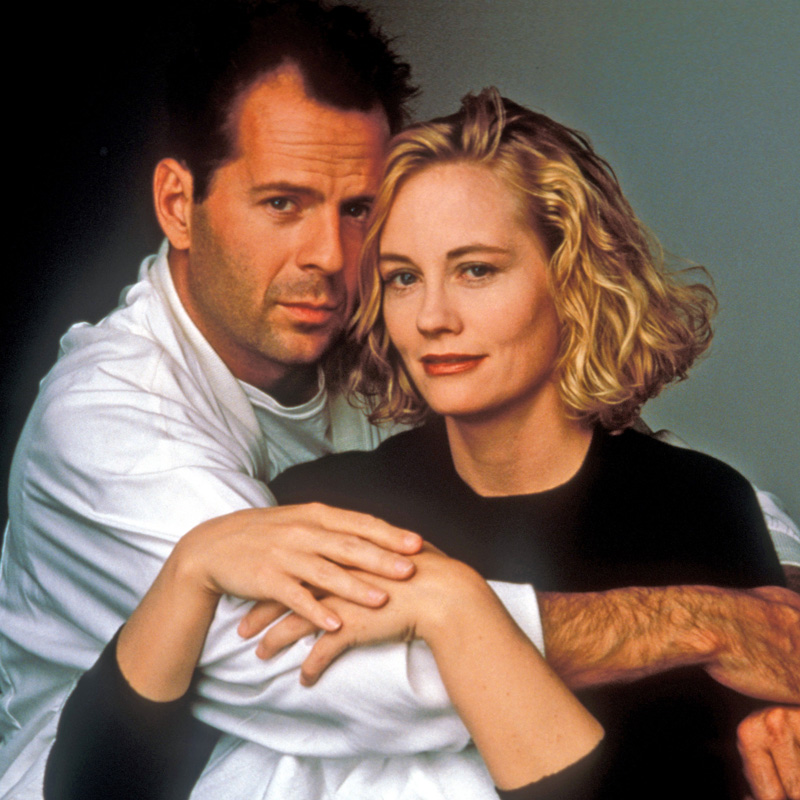 Moonlighting is one of those TV shows I never saw when I was young, but was aware it existed from a young age due to a MAD magazine parody. I knew it was the show that launched the career of Bruce Willis as well as being the prime example that you should never let the two main characters hook up because it will kill your show. Something which became known as the “Moonlighting curse”. Having not seen it at the time in the 80s, I never got the whole must-see television aspect of this show. Apparently this was the show everybody spoke of at the coffee machine at work next day. I was eight in 1986 so I didn’t drank coffee yet and didn’t have a job yet. But with the power invested in me by the internet I obtained all of the seasons and decided to give this show a look.

Moonlighting stars Cybill Shepherd as Maddie Hayes. A former model who finds herself bankrupt after an accountant embezzled all of her liquid assets. A plot Rocky V would shamelessly copy four years later. She still has a couple of failing businesses, mostly used for tax write-offs. She finds out she owns a detective agency named City of Angels run by the carefree David Addison (Bruce Willis). During the pilot episode he eventually persuades her to keep the business, rename it to Blue Moon Investigations and run it as a partnership. So begins the story of Maddie and David of five seasons of Moonlighting. 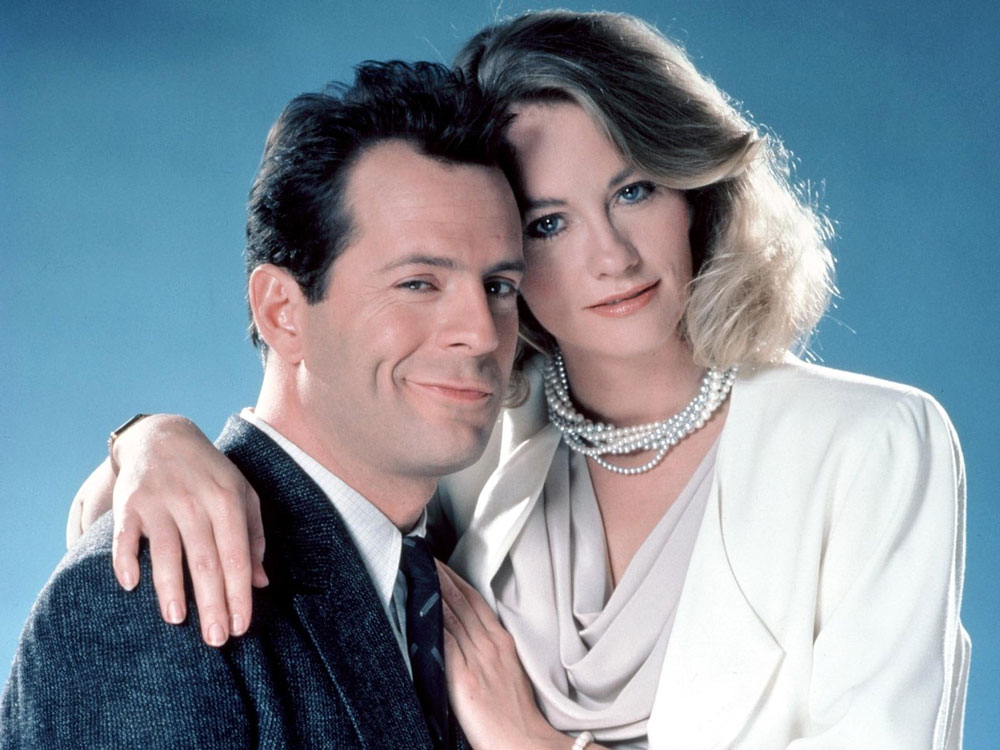 To be honest, I had a bit of a difficulty getting into this series. The pilot wasn’t all that great and I kind of had to force myself through season one which only has six episodes. It wasn’t until I decided to put all the episodes on my iPad and watch an episode each day while commuting that I really got into the show. The first season mostly plays it straight and was a comic approach to detective procedurals. Maddie and David constantly bickering while solving a quirky case each episode, often ending in a funny chase scene.

But the series really came into its own during the second season. Maddie and David became a will-they-or-won’t-they couple as the bickering became a metaphor for sex. The on-screen relationship constantly jumped between them fighting and making up. The series also became very experimental as the writers went for an anything goes approach. Instead of just goofy cases to solve, they would often break the fourth wall and address the audience directly acknowledging that this was a TV show. And that was just the tip of it.

There is an episode shot in black and white for most of its running time since it consists of a 30s film noir setting. As an added bonus none other than Orson Welles delivers an explanation that noting is wrong with your TV set and that the show is deliberately shot in black and white. Just so viewers don’t get confused. Another notable episode is a rendition of Shakespeare’s The Taming Of The Shrew which is made as a period piece with the entire cast delivering their lines in iambic pentameter. There is even an episode which takes place in a womb and has Bruce Willis dressed up as a baby.

From season two and on it would always be a surprise to the viewers with what the writers would came up with each episode. One minute you could be watching a chase scene and the next minute the sets are being dismantled, the gun taken out of the hand of this week’s villain by a crew member and a director simply stating that the time’s up and they have to wrap it up. Deus Ex Machinas do not come more blunt than that. This is what made Moonlighting truly unique in my opinion. 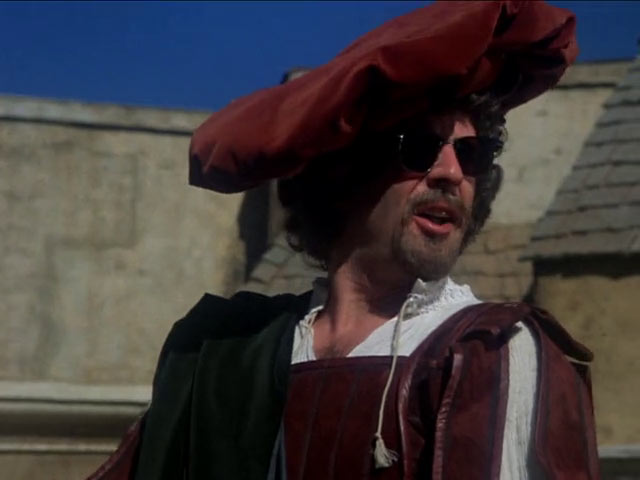 Bruce Willis as Petruchio in the Atomic Shakespeare episode

When you are watching this show now, without having to wait a week between episodes, you kind of miss out on all of the behind the scenes drama that was going on at the time. It’s well known that Bruce and Cybill did not get along at all and episodes were delayed so much viewers would only get an episode every two to four weeks. Of the usual 23/24 episodes per season, Moonlighting managed to make only 18 in the second season. All other seasons would have even significantly less episodes. The only times I would notice this, as a binge watcher of this show, was when they would directly address it. Something they did on multiple occasions as part of breaking the fourth wall. 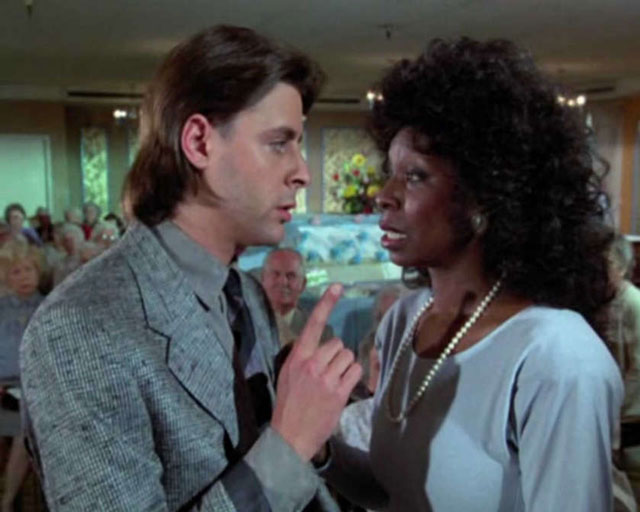 With old TV-shows it’s always fun to see people before they were famous. Moonlighting of course has Bruce Willis as the lead before he became a movie star. There were also plenty of other famous faces on this show. Most of them are indeed just starting their career, but also well-established names pop up in certain episodes. Academy Award winner Whoopi Goldberg appeared in the season two finale just because she though the show was so much fun. I already mentioned Orson Welles but other notable names that have had small roles are Mark Harmon, Virginia Madsen, Tim Robbins, Judd Nelson, Don King, Demi Moore, Jennifer Tilly, John Goodman, Ray Charles and Pierce Brosnan. 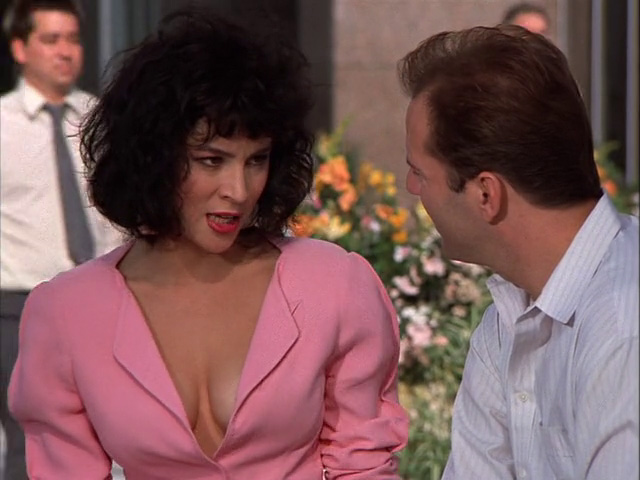 Jennifer Tilly in an episode of Moonlighting 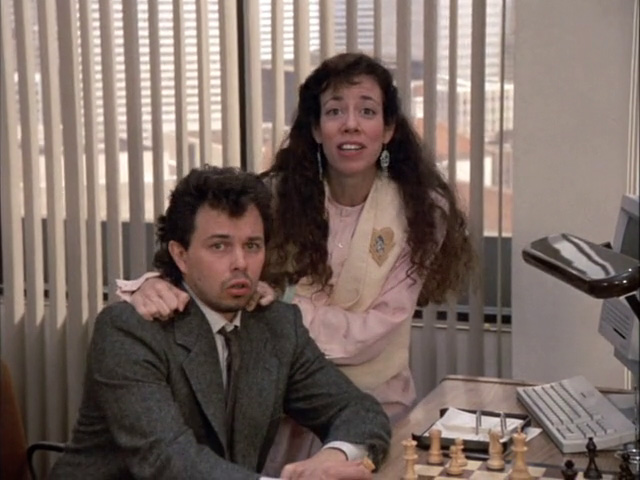 Watching it now, the cracks in the show came at the start of the fourth season. Maddie and David finally consummated their love for each other at the end of the third season. After that the writers of the show had no idea how to handle their relationship. They could not just go and pretend it never happened. Furthermore, Cybill turned out to be pregnant which was written into the show. But her being pregnant also meant that she did not have the energy to do full days of shooting. The writers “solved” this problem by having Maddie stay at her parents for most of the fourth season. So of the 14 episodes this season had, 10 of them featured David and Maddie apart. Because the foundation of the show was the sexual chemistry between its two leads, having them separated almost an entire season made the whole thing collapse.

Cybill’s absence had Bruce’s David turn into a more serious and depressing character. David Addison was the happy go lucky character, who would do limbo dancing contests at the office. In season four he becomes a more serious and moody character who isn’t fun to watch any more. With Maddie gone he often works cases together with Bert Viola (Curtis Armstrong). Bert was written into show in season three as a love interest for Agnes DiPesto, the receptionist. Bert is a rather annoying and obnoxious character, so upgrading him to a regular and central character hurt the show. Especially when he has to carry entire episodes. With Cybill taking a step back, Bruce went on to make a little movie called Die Hard. To fill up the absence of both actors, episodes revolving around supporting characters like Bert and Agnes were made more often. This did not work since Moonlighting was about the sexy couple of David and Maddie, not about the quirky couple Bert and Agnes. The ratings showed that halfway through a Bert/Agnes episode people changed channels. 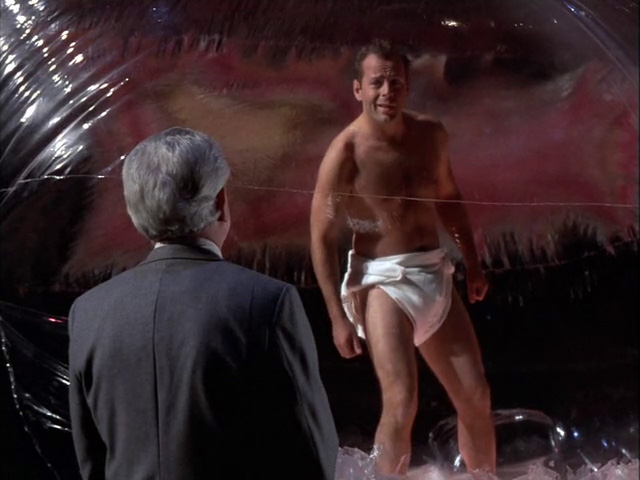 Season five does redeem the terrible fourth season somewhat, but not without a giving us a terrible season opener first. It’s the aforementioned “Bruce Willis as a baby in a womb” episode. It ends up with Maddie having a miscarriage and therefor undoing everything from the previous season so she and David can go back to what they do best: solve wacky cases and constantly bicker. But it’s too little, too late. As an audience, you can’t simply erase the previous season from your memory and pretend nothing happened. The audience wanted Bruce and Maddie to have sex, and they got that. Going back to the will-they-or-won’t-they aspect doesn’t work anymore then. It would only be frustrating. At the same time Cybill wanted to spend more times with her twin babies and Bruce was now becoming a movie star with the success of Die Hard. So they made a mere 12 other episodes before the show went off the air. One positive note though: they did go out in true Moonlighting fashion with the sets being dismantled in front of them and a network executive telling them they’re cancelled.

I don’t think Moonlighting has hold up that well after 30 years. It might have been unique and groundbreaking at the time, but a lot of episodes feel stale when watched today. The most memorable aspect of the whole show is seeing Bruce Willis in the role that made him famous. He is by far the best part of Moonlighting and it’s a reminder of how funny Bruce Willis can be if he wants to. It’s sad to see him sleepwalking through most of his current movies; devoid of any investment in the movie, only in it to pick up a paycheck. David Addison has the same manic energy as John McClane or any other early Willis movie role. If this was a Trump tweet it would end with “SAD!”.

While I enjoyed many aspects and plenty of episodes of the show, I don’t think that this show will strike a chord with many people today. Not like shows such as Twin Peaks and The Sopranos which still pull in new audiences and hardly feel dated. The only people who will watch Moonlighting today, probably saw it back in the 80s and do it for nostalgic reasons. But even in that way, the show doesn’t have the same charisma like The A-Team or Dukes Of Hazzard for instance. Shows of which you can easily put on an episode and have some over-the-top fun for 40 minutes and then go on with your life. Moonlighting has too much of a drama aspect to it. Especially in later seasons. Why would you watch an episode in which Maddie marries a stranger she meets on a train?

Moonlighting certainly has a place in TV history, but this could have been a much better and coherent show if there wasn’t for all the trouble behind the scenes. Even 30 years later it’s still obvious how much it hurts the show when watching it. Nowadays its normal to have TV shows that run for only 13 episodes per season. In hindsight it would have been better to apply this approach to Moonlighting instead of even trying to make 24 episodes. If Moonlighting taught writers of future shows one lesson it’s this: never give the audience what they want. Too bad the writers of Lost took this a bit too seriously, but that’s a whole different topic.