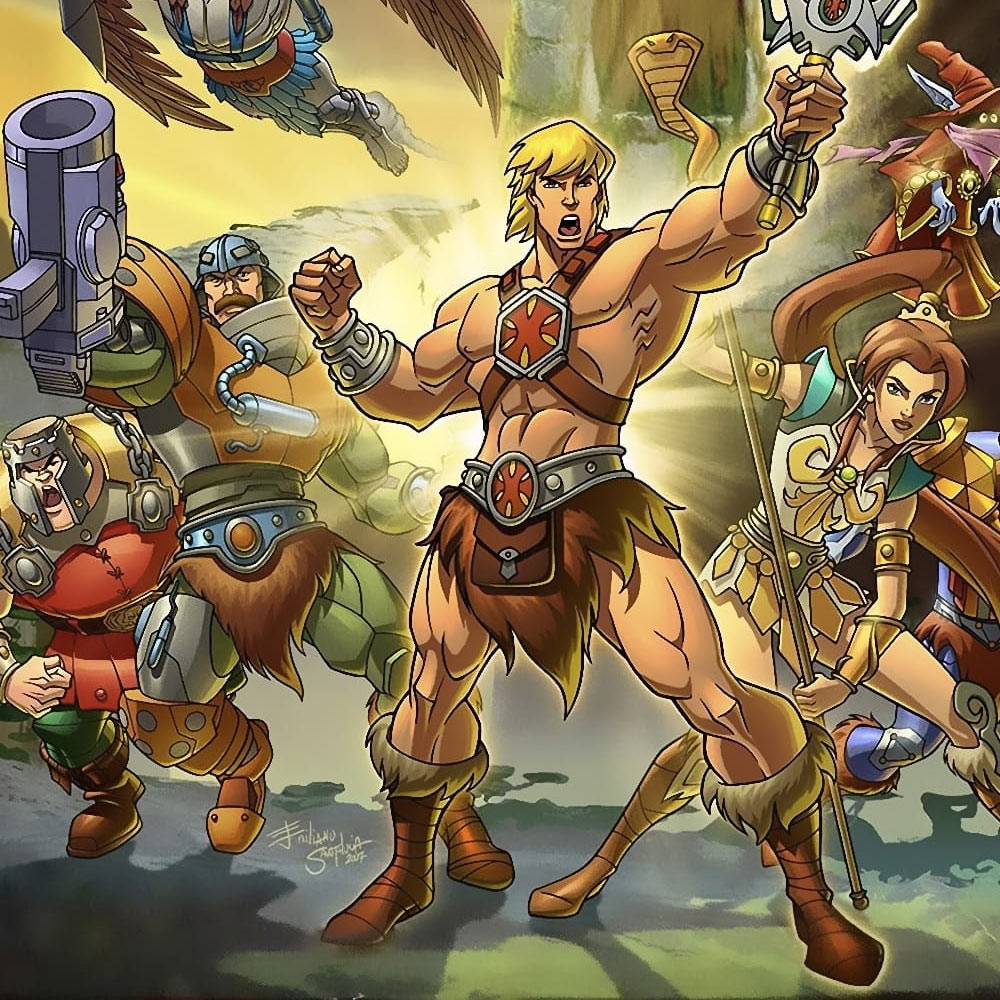 Growing up in the 80s it was hard to ignore He-Man and the Masters of the Universe since this was “the cartoon” until Transformers and G.I. Joe came along. I owned some toys and watched the cartoon avidly, I always had a soft spot for it during the 80s but times changed and somehow it never got a rerun in my country. But then a portal to this old school goodness was created: The Internet. Sadly when I re-watched some of the old episodes I immediately understood why I haven’t seen it in so many years: it has aged really badly. Like most cartoons created since the 80’s He-Man’s main function was to sell toys. Basically every episode was a 20 minute commercial for the toys, carefully introducing new characters every now and then. The cartoon was made by Filmation, known for their notoriously cheap looking cartoons which recycled certain elements over and over again just to cut costs. Somewhere in 2002 I stumbled upon new cool looking Masters of the Universe toys and found out they were accompanied by a new cartoon with updated looks, better graphics and animation and with a more solid story-line. That’s why for this “Looking Back At” I’m looking at the 2002 Masters of the Universe cartoon instead of the original! 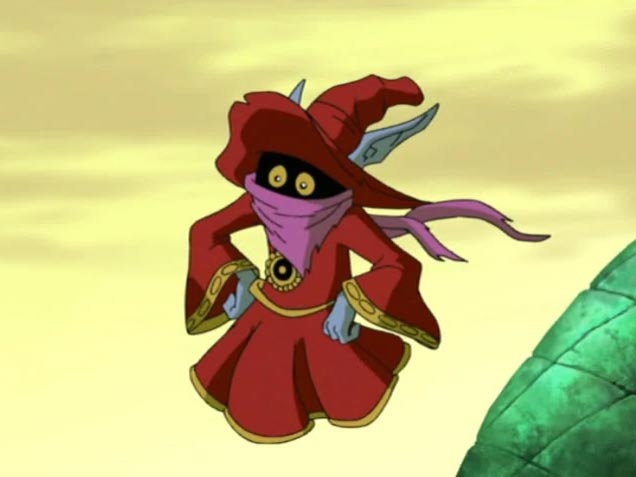 Having watched all 39 episodes, not that many compared to the 80’s series which had over 100 episodes, I found this series a fresh and welcome take on the He-Man mythos. While it obviously still is a 23 minute commercial for toys, it’s clear the people involved had a strong love for the material and did their best to create a cartoon that up until now is the best interpretation of He-Man. The main reasons for this being a superior show are:

Most episodes were standalone in the old show, but here they start of with a three-part origin story showing how Prince Adam becomes He-Man after the evil Skeletor releases himself from his “prison”. We even get to see how Skeletor became Skeletor and that he once was a man named Keldor, Adam’s uncle. From that point on the writers have events in one episode being referred to in others. Even Skeletor’s plans, though in the beginning very reminiscent of the “a scheme a week” template from the old show, have a switching focus. At first he attacks the main castle but when he finds out there’s something up with the old ruin called Castle Grayskull he focusses his attention there. 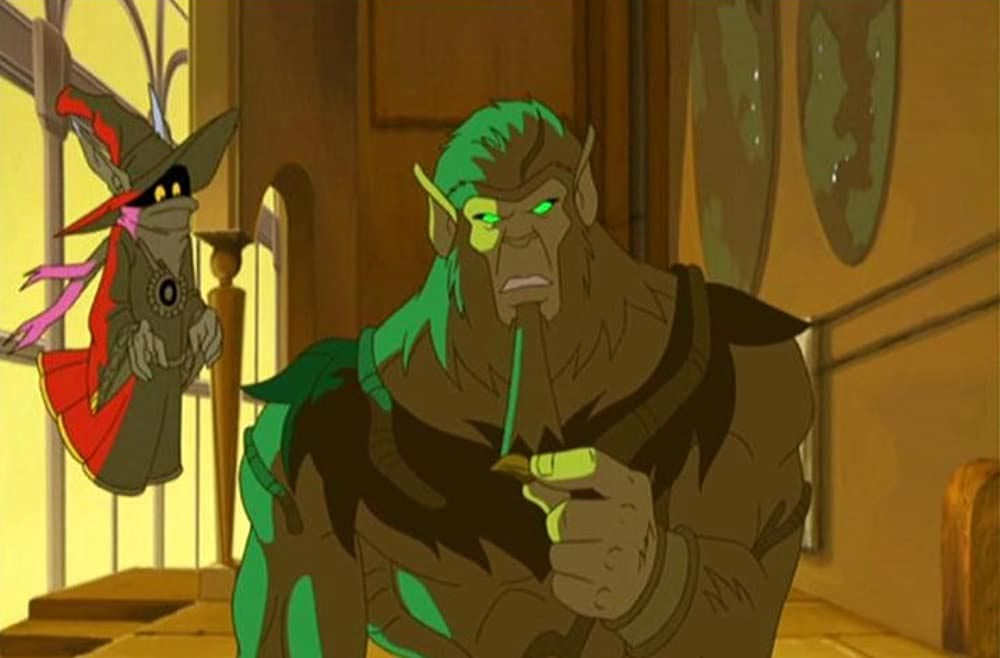 Later on The Snake Men are introduced and this gives the story-line a certain dynamic as they’re after the same as Skeletor: total control of Eternia. So there’s a three-way dynamic going on with all these parties fighting each other… In the final episodes they build up to introducing Hordak and his Evil Horde from the She-ra cartoon, but sadly this show was canceled and leaving the audience with an unresolved story. They also introduce characters that in the 80s were only released as toys. Next to the standard side-characters like Teela, Man-At-Arms, Ram Man, Trapjaw, Tri-Klops, Beastman, Evil Lyn, there are a whole bunch of characters that got little or no screen time in the 80’s but after being introduced are added to the main cast and make multiple appearances, some even get an entire backstory like Odiphus who would become Stinkor. Next to him this new series features: Sy-Klone, Roboto, all of the Snake men except Kobra Kahn, MossMan and a few others.

Though still a toy commercial at its core, it’s clearly obvious these characters are introduced to sell toys, just like the many vehicles Man-At-Arms constantly creates. But the writers took this notion and gave it good spin by actually making those characters layered and returning, having one character be the central figure one week and then dispose of them. 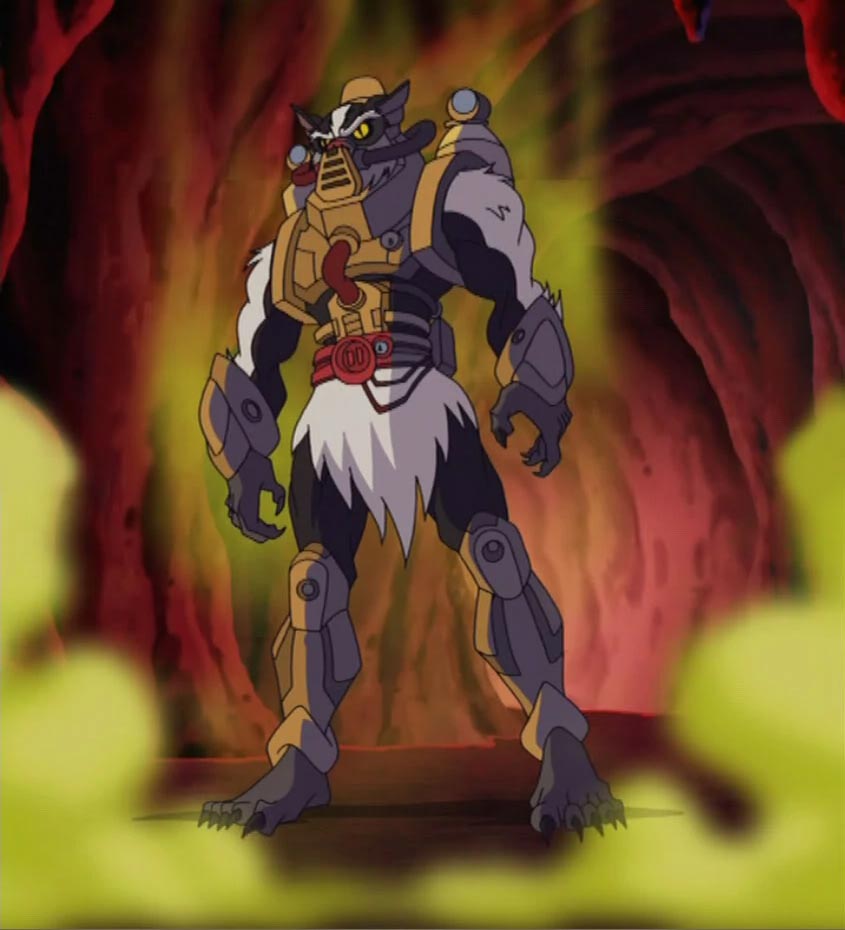 This series uses fluid Anime-influenced animation and has clearly been made with a computer. This is especially evident when they are on vehicles. The action scenes are tight and gone are the forever recycled bits like He-Man punching the screen. A lot of characters have better designs and they actually make Prince Adam and He-Man look very differently from each other. One of the main remarks that was made of the 80’s cartoon was that it was really stupid they nobody saw that He-Man and Adam were one and the same. All he did was take of his clothes and get a tan when he became He-Man. Now he’s a 16 year old kid, transforming into a 30 year old body builder twice his size and with a different voice.

The soundtrack has also received an upgrade though this is less impressive than the animation upgrade. The voice acting of the 80’s series was a tad boring when it came to the good guys, so they upgraded that here by giving them more distinct voices. Stratos now sounds like Sean Connery, Buzz-Off has a digital effect over his voice as well as Roboto who’s voice is made with a vocoder, just like SoundWave from the Transformers. Prince Adam sounds like a 16 year old boy while He-Man sound like a grown man.

What was also remarkable about MOTU was that they have all of these characters who seem to belong to certain species, yet they always seem to be the only one in their kind, as if they’re unique mutants. The 2002 version shows Stratos’ people in Avion and armies of Andreenids like Buzz-Off. The same goes for the bad guys: Whiplash seems to have betrayed his people who live in Subternia, Kobra Kahn is now a member of the Snake Men and Clawful’s relatives (crab-/lobster-people) are also shown in one episode. 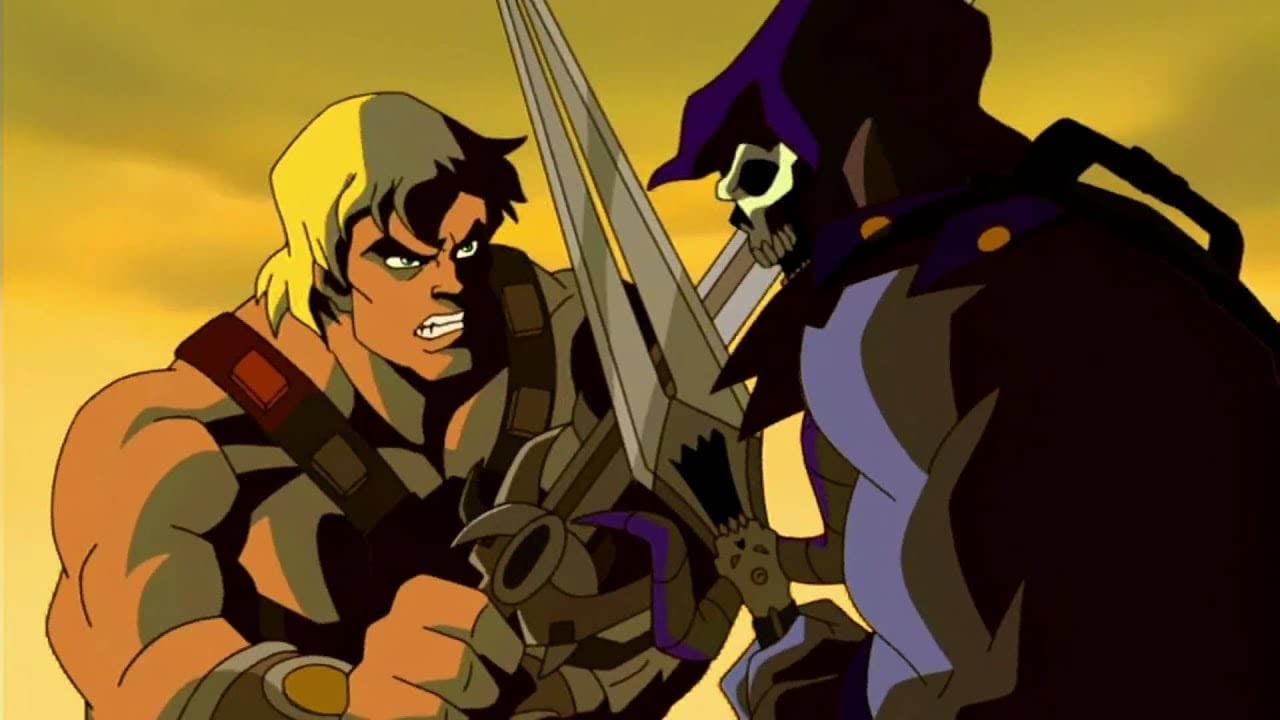 This 2002 version of Masters of the Universe isn’t perfect though. While I loved the way characters were re-imagined, the first season does become repetitive with Skeletor hatching up a plan every week which is fumbled by He-Man after which he just so narrowly escapes with the aid of Beastman or jumping on a vehicle that’s available in a toy store near you! I also found it annoying that, save for one episode, none of the henchmen are ever caught and imprisoned by the Masters. When they do get caught, you can count on it they’ll escape the next episode.

This in the first place being a kids show, there are no graphic deaths but overall I found that the show could have been more lethal to its characters. At one point one of Hiss’ Snake Men turns all of Skeletor’s minions to stone…is this the end of them and is Skeletor forced to look for new troops? No, at the end of the episode, Skeletor returns them to their normal form. Characters that betray him are awaiting death, by some convoluted trap that either gives them a way out, or give them time to talk themselves out of it. King Hiss is defeated twice in the series, yet even though his supposedly lifeless body is thrown of Castle Grayskull he returns a couple of episodes later. There is one point where Hiss eats one of Whiplash kind, but the show could have used some more fatalities especially since it already had Skeletor and his troops, the Snake Men and was about to introduce The Evil Horde. 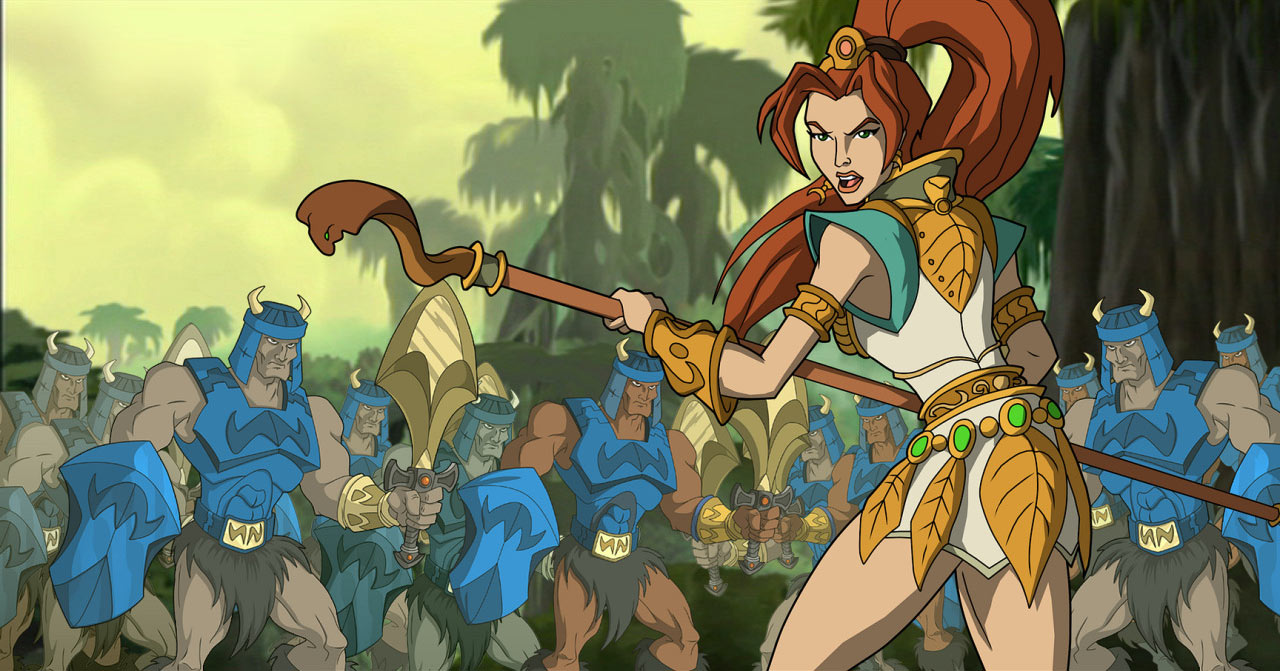 This is a great, but sadly short-lived show. What it does show is that there is still potential to bring something great to the screen concerning He-Man. Something the old show, the live-action movie and The New Adventures of He-Man didn’t do. With a good script and the technology we have nowadays this could make a great live-action movie, but I’ve been saying that about The Legend of Zelda as well. Now if you’ll excuse, I’m going to play with my He-Man toys.