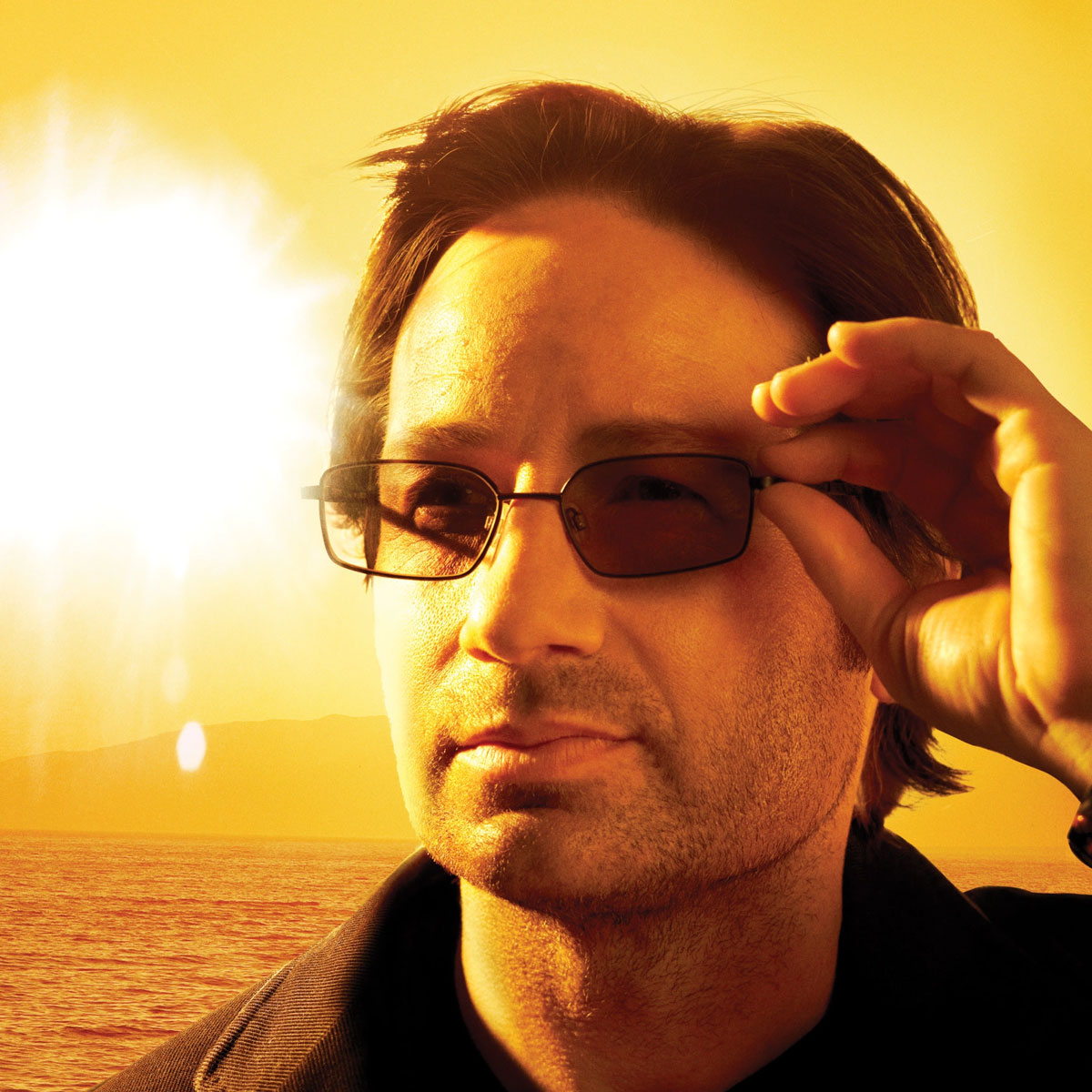 The comedy-drama television series Californication ran from 2007 to 2014. It stars X-Files’ Agent Mulder, David Duchovny, as Hank Moody: a successful writer whose womanizing and drinking complicate his relationship to his former lover Karen and their daughter Becca.

To counterbalance the comedy there are the occasional earnest scenes between Hank and his former family and events that cause an emotional turmoil. 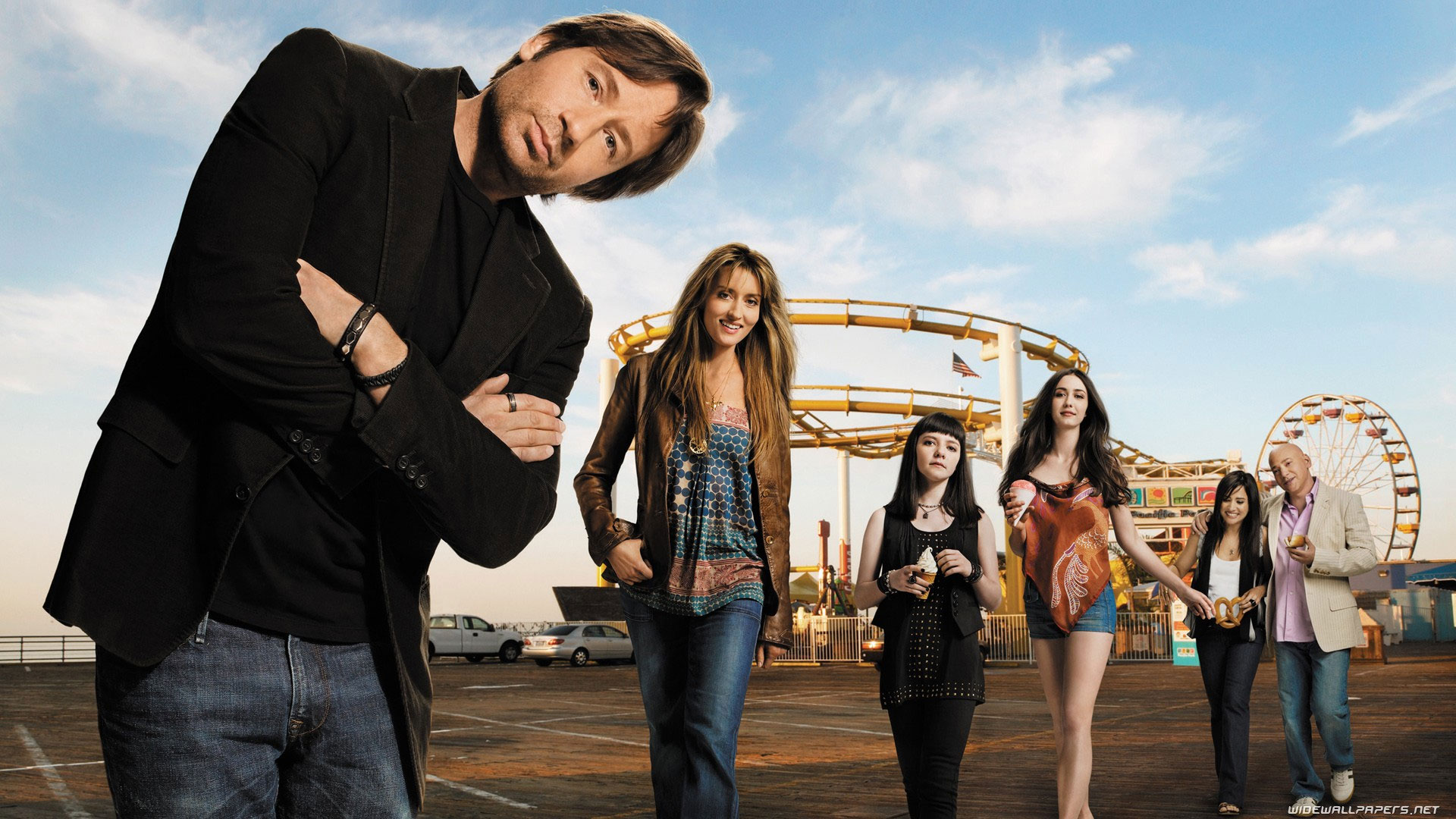 It was the description of blowjob-by-a-nun scene in a newspaper review of this series that intrigued me in the first place. Before I knew it I was watching this show once a week, 12 weeks a year for seven years. That sums it up to 84 episodes. And last month I decided to re-watch the entire show. With three episodes a day it took me exactly 28 days to watch this show. With episodes clocking in under 30 minutes, watching three episodes takes up less time than the average movie.

Binge-watching an entire show is certainly a different experience than watching an episode once a week and having to wait nine months for a new season to come out. Certain events that transpired in previous seasons are still fresh in mind when they are referenced in throwaway dialogue in later seasons. But there’s also a sense of repetition that is more obvious when you binge-watch one season after another, instead of the classic way. 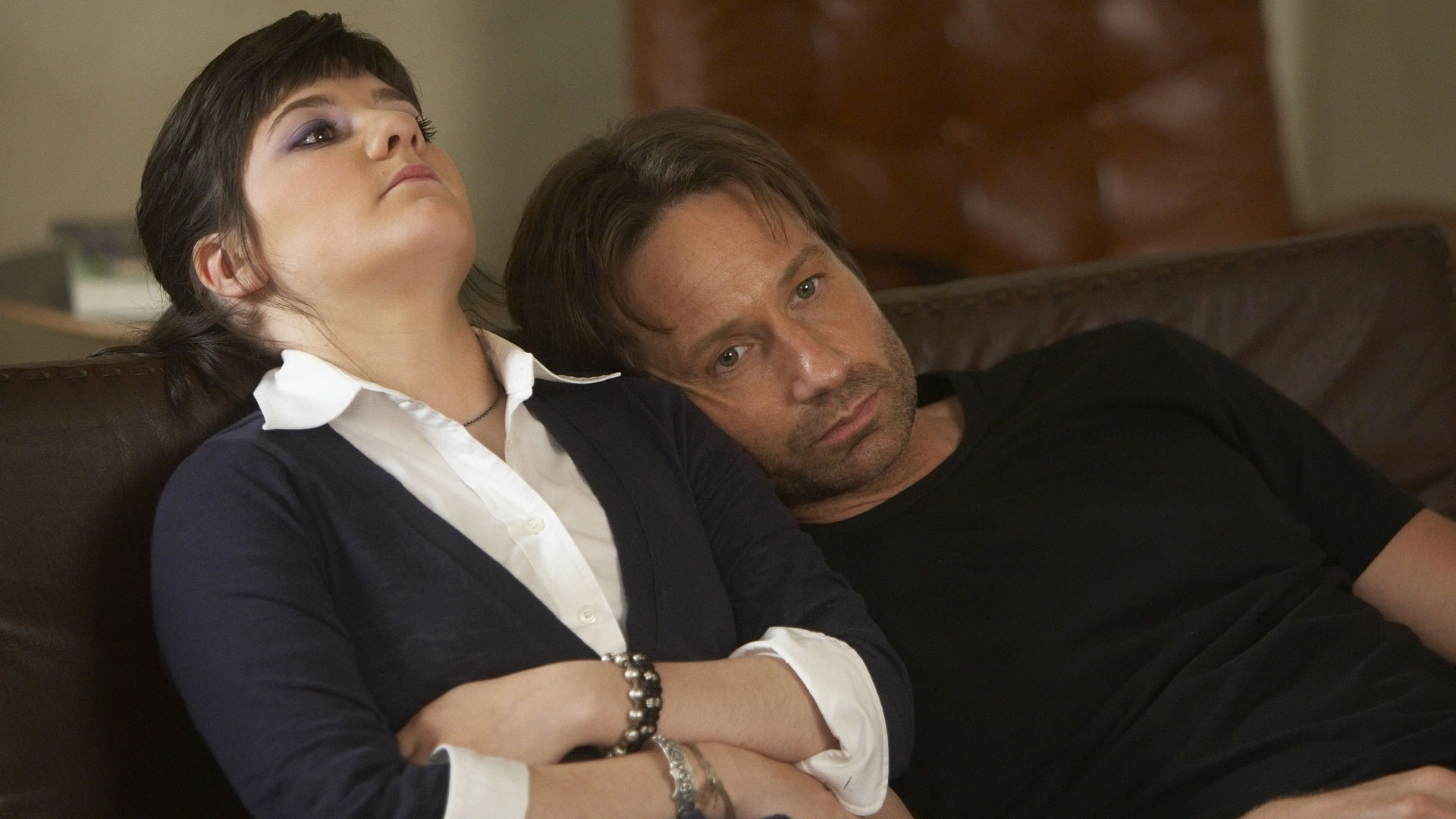 All of Californication’s subsequent seasons follow a similar flow. An easy payday falls into Hank’s lap and he befriends the person he’s working with or for. Work and privacy always seem to overlap with Hank. The projects/jobs consist of writing the memoirs of a big time record producer, becoming a teacher, writing a screenplay for a rapper-turned-actor or helping a rock star turn a novel of Hank into a musical. Hank also has the tendency to stick his penis into every attractive woman that crosses his path and that occasionally comes back to haunt him.

Meanwhile he has an on/off thing going with Karen, a daughter going though puberty and a busy nightlife often accompanied by best friend/agent Charlie Runkle. Where Hank is revered like a god when it comes to women and sex, the sexploits of Charlie are often if not always used as comic relief. 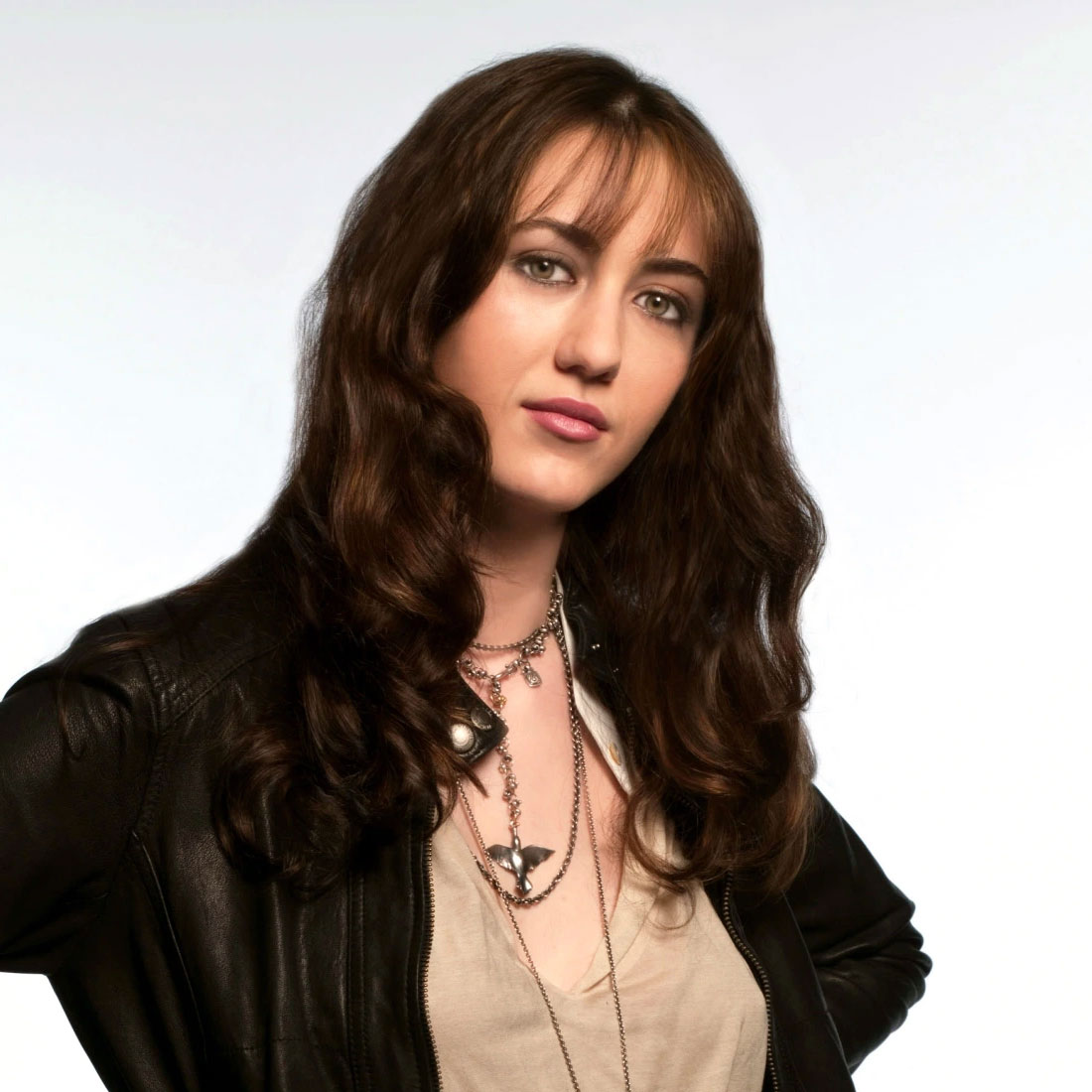 In the first episode of Californication we meet Hank as he is going through life trying to be a good dad to his daughter while still dealing with the heartbreak of his break-up with Karen. She’s engaged to Bill and preparations for their wedding are in full progress. One night Hank finds an attractive woman reading his novel at a book store. They hit it off and end up having sex. For some reason she punches him in the face while he is having an orgasm. A few days later he’s over at Bill and Karen’s house to visit his daughter Becca. Here he’s introduced to Bill’s 16 year old daughter Mia, the same woman who he had sex with. And for those who don’t know, having sex with a 16 year old as an adult is a crime in the US.

This secret that Hank and Mia now share is the sword that hangs above Hank’s head. She enjoys the fact that she has a certain power over him and it’s near impossible for him to come clean to his ex-wife and daughter. He’s afraid they’ll never believe he didn’t sleep with Bill’s daughter to get revenge on him. His fears are justified since Hank is well known for his womanizing ways and for keeping a grudge.

The secret comes out in the final episode of the third season with season four dealing with the trial of Hank. It’s after the fourth season the show truly begins to feel its repeating itself. With the secret out in the open and Mia out of the picture season five jumps a few years into the future with Becca now going to college and having a sleazy, cheating boyfriend. Karen is now living with another man and Hank is living in New York where he still enjoys his single lifestyle but he returns to Los Angeles for a short, business-related visit. 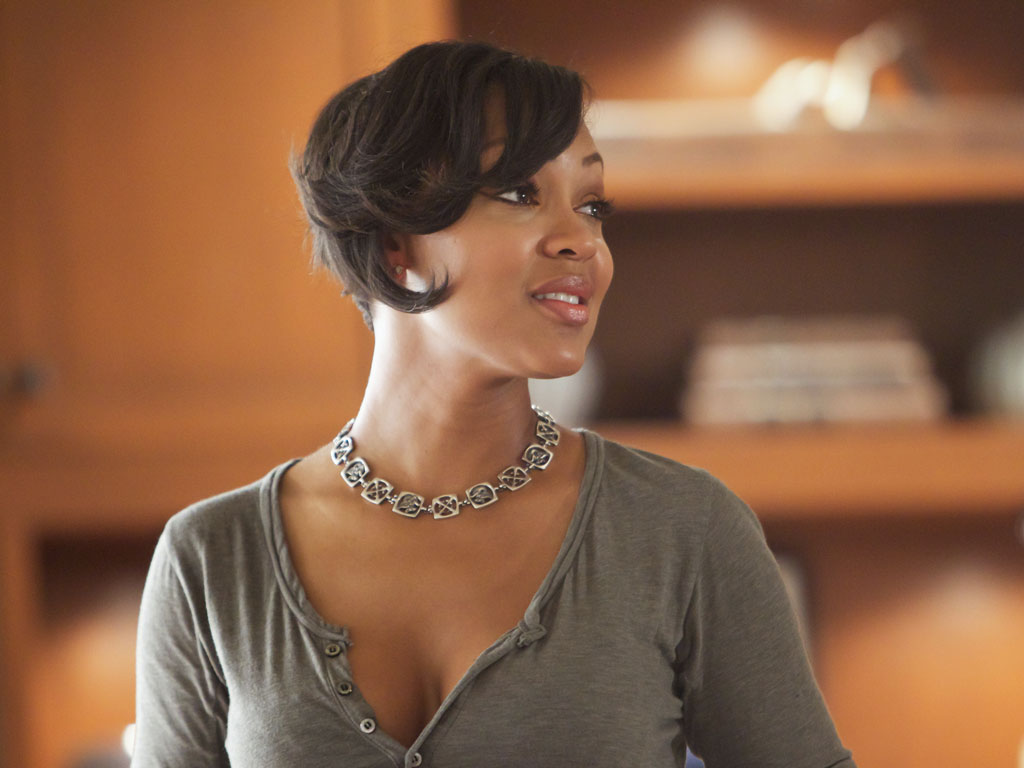 During the flight he has sex an attractive black woman named Kali, only to find out later she turns out to be the squeeze of a highly volatile and aggressive rapper named Samurai Apocalypse. And as fate dictates the same guy is this season’s “easy payday” as he wants Hank to polish the screenplay for his feature film debut. It’s a small world after all.

It’s yet another secret sexual indiscretion, but the stakes of this secret ar far less high than the whole “sex with a minor” thing. They try to make a lot of this secret by emphasizing that Samurai Apocalypse will kill Hank if he ever finds out. But this never feels like a serious threat as this show would never allow for Hank to be killed off. The season itself also has a recurring scenes in which Samurai Apocalypse accuses Kali and Hank of having sex to which they do their best to convince him otherwise only for him start laughing and saying something like “I know, I’m just fucking with you”. It gets old pretty fast.

Watching season five I really had the idea that they had no clue where to take Hank’s story. Becca and Karen are still in the picture, but with Becca maturing and going to college the need for Karen and Hank to be together to form a family is less pressing from Becca’s perspective. It goes without saying that it also removes the whole “doing it for her” aspect of Hank and Karen’s on/off relationship. This is for the better in every scenario, but also enlarges the distance between Karen and Hank which doesn’t work in favor of the show. They seem to be wandering in each others lives occasionally, but live their own lives very much apart. 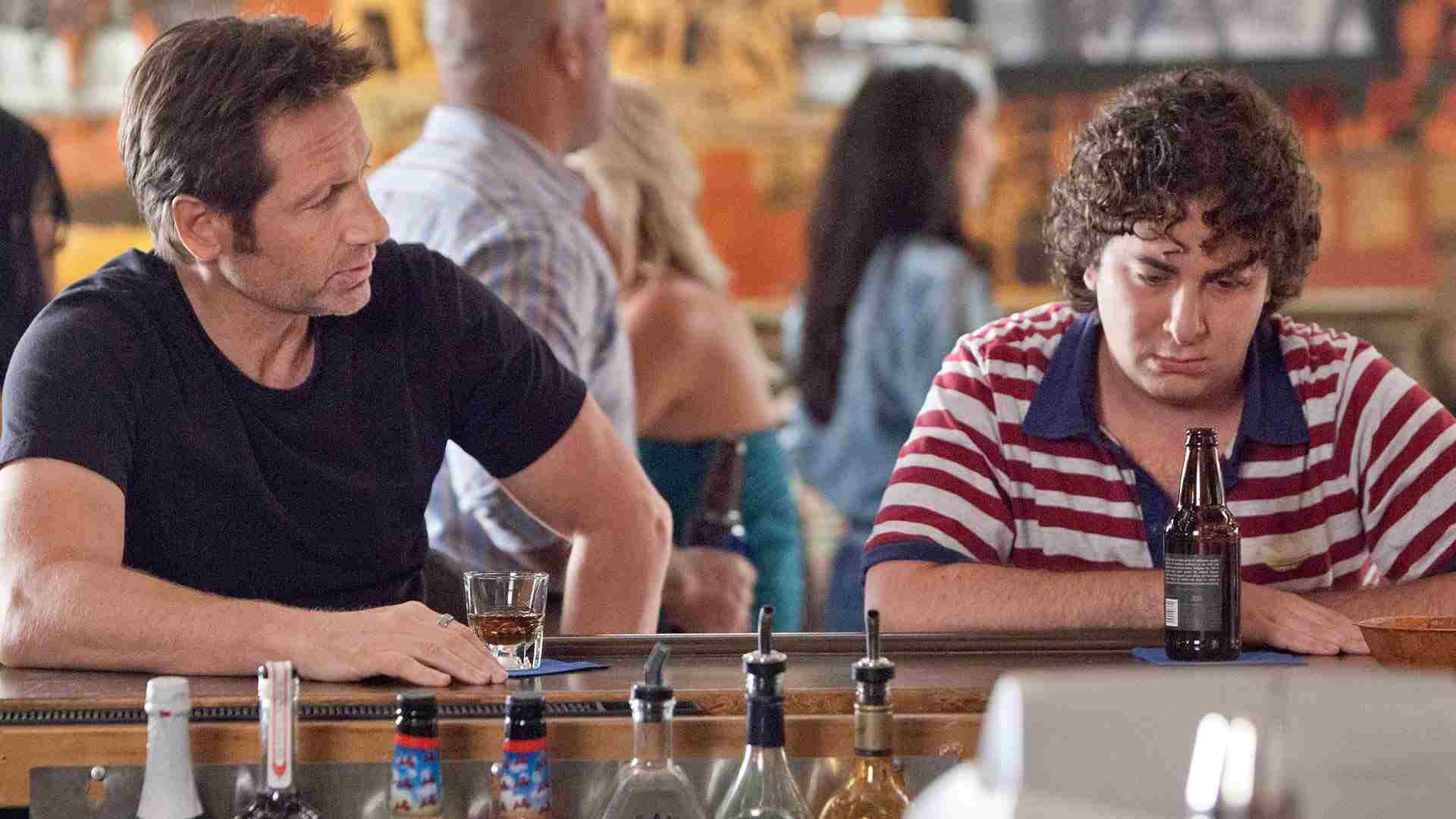 The final season shakes things up in a big, but not necessarily good way. Becca is absent for almost the entire season and to replace her the writers introduce a long lost son: Levon. Apparently Levon is a few months older than Becca and the result of one of Hank’s many one night stands. It’s a classic soap-opera trope, but with all the women Hank slept with and his aversion against condoms it’s a miracle he only fathered two kids. 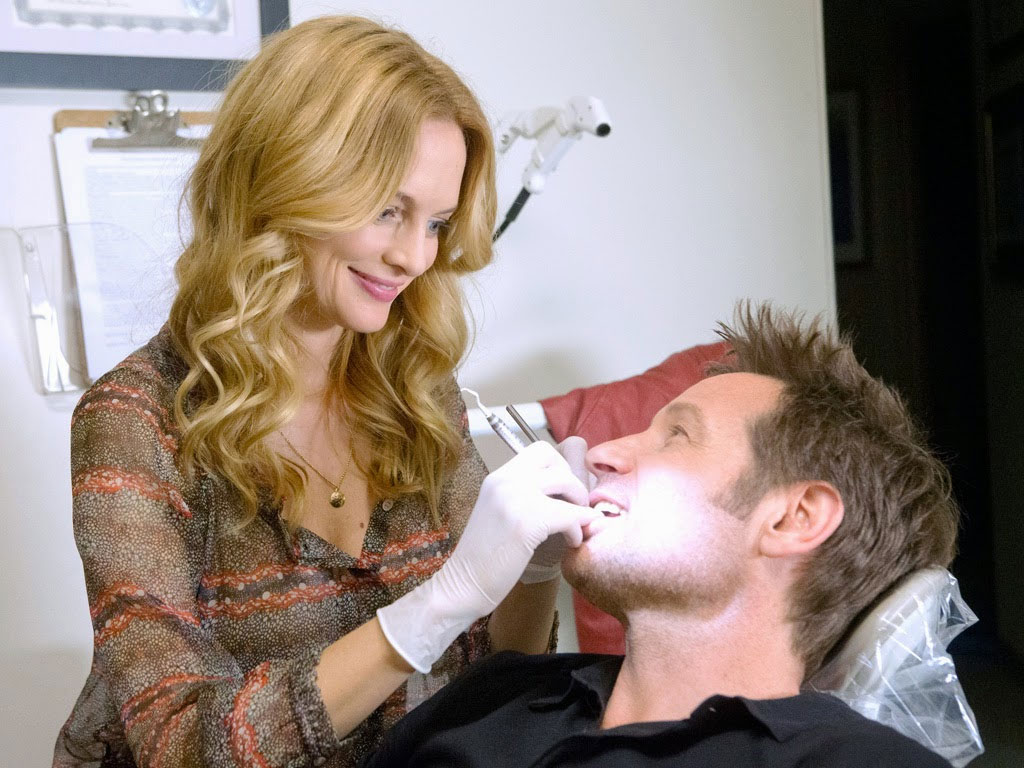 The upside to this storyline is that it gives Hank an out to his never-ending on/off relationship with Karen since Levon’s mother is single, very attractive and there is still chemistry between them. The downside is that Levon is a very annoying character. He falls into the classic movie trope of the obnoxious and socially awkward nerdy Jew. Think of Jonah Hill in Superbad, or Shelly in Friday the 13th Part III.

It’s changes like this that make the final season feel more like an afterthought. In this season Hank becomes part of a writing team on a TV adaptation of the movie Santa Monica Cop. It puts a man known for freewheeling around movie sets and rock-star mansions in an office with co-workers for much of the season. Some of those moments work, but it doesn’t feel like a place where Hank Moody would last longer than an hour or two. 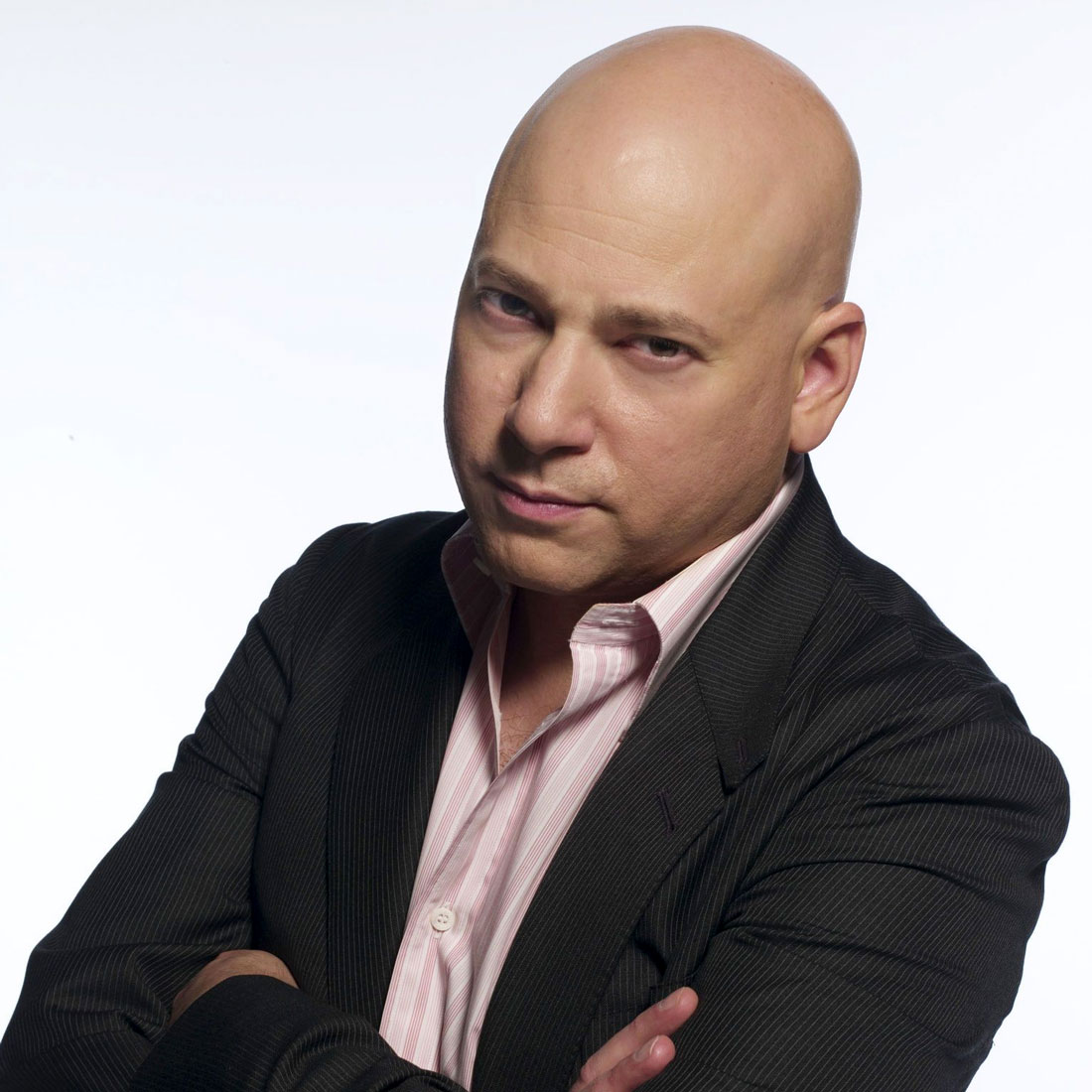 Despite its flaws in the later seasons Californication remains entertaining until the end. While Hank’s actions become predicable pretty fast they always manage to make me laugh. But the M.V.P. of the show is probably the character of Charlie. He always ends up in the most hilarious situations, but also has a bigger heart than probably any other character on the show. Especially when it comes to Marcy, the love of his life. They’re a sweet couple in a demented sort of way.

Looking back Californication is still the hilarious TV show I watched back when it originally aired, but the repetition in the story doesn’t make the show exactly ripe for binge-watching. The nine month hiatus between seasons gave it a breath of needed fresh air. But I must admit that it is still a unique show. I can’t recall any other show that is so hilarious and sexy at the same time.