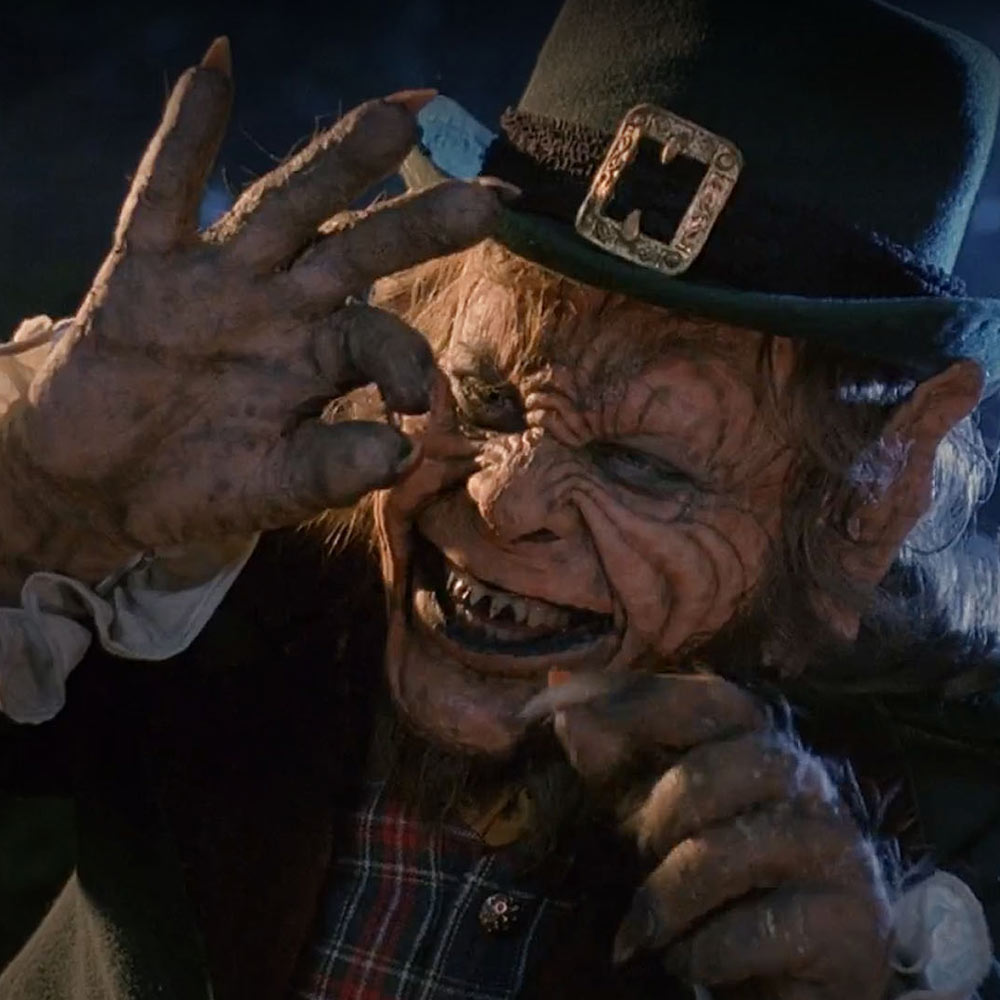 Studios love nothing more than a movie that’s guaranteed to bring in a minimum amount of money. Since movie making is always a gamble nothing gets green lighted as easy as a sequel to a box-office smash. Sometimes these perform so well a third installment is in the works in no time and so a franchise is born. Franchises are easy money: they have a fan-base and marketing is a lot easier than with original films. It’s not hard to see why studios try their best to create properties that they can use in multiple movies, but every now and then the strangest movies get a sequel, and another one, and another, etc. “With What The Franchise?!” I’m taking a closer look at franchises that should have never been.

I got the idea for this article and this subject due to the fact that in the never stopping trend of horror reboots and remakes this year a reboot of Leprechaun was released: Leprechaun: Origins. Like all the other moves it holds a very low rating on IMDB and  to be honest: I didn’t even know it was already released yet until a couple of days. It’s been on the market for months now, so that’s saying something.

The original Leprechaun movie was released in 1993 and got bad reviews. It was made for just under a million but managed to take in almost ten times its budget at the box office in America. In a lot of other countries it was just another straight to video horror movie starring yet another potential slasher icon. Not surprisingly, making your money back ten times is enough to warrant a sequel which quickly followed a year later, and then another one a year later, and then another one again a year later. That’s four movies in four years of which none of them are pretty good. To show you why I wrote this article I’ll give you an oversight of all the Leprechaun movies and their current rating on IMDB:

Imagine that was your report card. Not something to write home about.

The first Leprechaun was a bad attempt at creating a goofy slasher icon in the vein of Chucky with some folkore mixed in. Today it’s most notable for starring a then unknown Jennifer Aniston before she had a nose job. As a standalone movie it would have been quickly forgotten together with a lot of similar horror movies from that era. It’s not like Rumpelstiltskin and Gingerdead Man left a lasting impression.

But then came the sequels.

Numbers 2 and 3 were more of the same, but situated in different locations and starring a different cast. By the time the fourth movie came along the writers were grasping for ideas so they took the only road every horror movie series takes when they run out of ideas:

Have the movie take place in space.

It was released in 1996. The same year that the Hellraiser franchise also went to space in the movie that killed of Pinhead.

Leprechaun 4: In Space is a terrible, terrible movie. It hardly makes any sense and it’s not even funny. It should have put the nail in the coffin of this franchise, but studios are reluctant to put a familiar name to sleep. As long as they turn a profit, why stop? So in 2000 they tried to inject the series with another great idea: an urban Leprechaun. In Leprechaun in the Hood they have him end up in Compton and kill off Ice-T. Oh and he also at one point takes center stage and busts a freestyle:

Apparently this was such a great success they released another movie 3 years later where he returns to the hood which actually seemed to be the last installment.

But as with all those horror franchises that have been dormant for a couple of years, at one point someone at a movie studio decides to breathe new life in a series that was considered dead and buried. It happened to Michael, it happened to Jason, it happened to Freddy, so it’s not completely surprising that the old leprechaun has been resurrected for a quick cash grab.

I haven’t seen it yet but by the looks of things Leprechaun: Origins has no real ties to the other movies other than featuring a killer leprechaun. Warwick Davis, who played the leprechaun in all the other movies, has been replaced by a little-person WWE wrester, the tone seems to be far more grittier than all of the other movies and humor is practically non-existent. At this point I’m judging it by the trailer, though the IMDB rating doesn’t look promising at all.

Leprechaun should have been a one movie thing, but turned out to be this enormous lackluster franchise which has zero actual good movies. How did this become a franchise? Where people suckered in so easy? My guess is that they could make these movies on a very low budget so that most, if not all, installments turn out to be at least profitable.

That’s it for now, but let me give you another classic Leprechaun scene. This one is from Leprechaun 4: In Space.